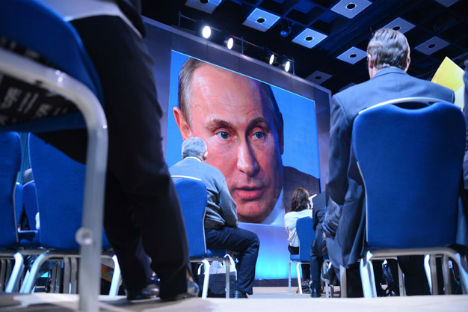 Russian President Vladimir Putin: I see no reasons not sign U.S. Adoption Ban, although I should look at the final version and weigh everything again. Source:AFP / East-News

Adoptions of Russian children to American homes are almost certain to be banned as Russian President Vladimir Putin says that he sees no reasons not to sign the anti-Magnistky bill passed unanimously by the Federation Council on Wednesday.

President Vladimir Putin has said that he will sign the "anti-Magnitsky" bill as well as a decree boosting  support for orphans.

"I intend to sign the law you have just mentioned as well as a presidential decree changing the procedure of helping orphaned children, children left without parental care, and especially children who are in a disadvantageous situation due to their health problems," Putin told the State Council on Thursday.

"I so far see no reasons why I should not sign it, although I should look at the final version and weigh everything again," he added.

As for the bill's provision that bans the adoption of Russian children by U.S. citizens, Putin said this was prompted, inter alia, by some steps by the U.S. authorities, which "deny any access to the adopted children, behave outrageously arrogantly," and also make decisions that Russia sees as "legally untenable."

The law on a “tit-for-tat” response to the Magnitsky Act unanimously passed by the Federation Council on Wednesday will stop the ongoing procedure of adoption of 46 Russian children by American families.

“According to the Education Ministry, 46 children will stay here because if the law is passed it will overrule the (adoption) agreement. Originally, it was assumed that there would be some transitional period,” said Pavel Astakhov, the Russian President’s commissioner for children’s rights.

“A decision will be passed for these children to be given priority in being adopted by Russian families,” the children’s ombudsman added.

Officially, the Russian-American agreement on adoption that came into force on Nov. 1 this year, can only be renounced a year after one of the parties notifies the other party of its intention to terminate the agreement.

This was announced on Monday by the Russian Deputy Foreign Minister Sergei Ryabkov who stressed in an interview with Kommersantthat the adoption agreement will remain in force for another year while the Foreign Ministry “looks for alternative ways to help our children in the USA.”

Pavel Astakhov earlier spoke in the same vein. But yesterday he explained that he thought so “at first, but after reading the law, it says from Jan. 1.”

The head of the Federation Council constitutional legislation committee, Andrei Klishas, denied reports that the Russian-American agreement would remain in force for another year after the law is passed.

“The Federal Law comes into force on Jan. 1, and all the adoptions will be stopped on that date,” Mr Klishas said. All the rest, he said, “are the Foreign Ministry’s problems.”

Earlier, Deputy Prime Minister for Social Affairs, Olga Golodets, acting at Prime Minister Dmitry Medvedev’s request, sent a letter to President Putin criticising the “Dima Yakovlev law.” She noted that the new law contradicts the Vienna Convention on the supremacy of international treaties, the Convention on the Rights of the Child, the Family Code and the Russian-American agreement on adoptions.

The renunciation of the agreement with the U.S., the Deputy Prime Minister argues, may result in loss of control over the fate of the children already adopted (about 59,000). Earlier, the ban on adoptions was criticised by Education Minister Dmitry Livanov, Foreign Minister Sergey Lavrov and Open Government Minister Mikhail Abyzov.

Prime Minister Dmitry Medvedev, commenting on Goldets’s letter, had this to say: “Golodets has sent such a letter to me. I looked at it and it cites certain conventions, both Russian and international. I don’t think I am no good as a lawyer, but I have asked professionals to look at it.”

Vladimir Putin’s press secretary Dmitry Peskov said that Ms Golodets’s position “will be taken into account” like those of “other members of the government who do not share her point of view.”

The story is based on materials from Interfax, Kommersant Daily and RIA Novosti.