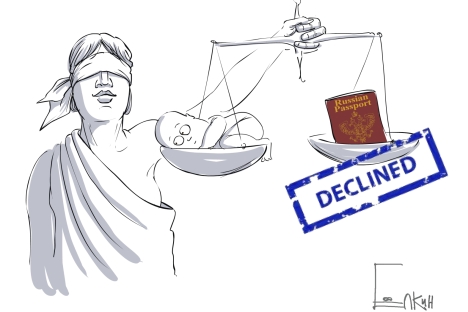 The discussion in response to the Magnitsky Act has created a political and social crisis in Russia, fueling debates about the future of Russian orphans among writers and social activists.

Drawing by Sergei Yolkin. Click to enlearge the image.

Read Eva Lanska's opinion on the next page.

Russia's State Duma has slipped on a banana peel. All it had to do was come up with a suitable reply to Washington's Magnitsky Act (something symmetrical and symbolic), before closing up shop for the New Year festivities.

But a strange thing happened – inexplicable even. The chosen method of retaliation was a ban on the adoption of Russian orphans by American foster parents, christened as the “Dima Yakovlev law.”

A ban on adoption is, in itself, such an acute topic that the discussion has led to a genuine crisis, political and social in equal measure. Four ministers spoke out against the bill, but, nevertheless, it was pushed through the Duma in record time. Have they ever acted so quickly before?

As for the public reaction, all hell broke loose, no less infernal than the Pussy Riot affair. Blog after blog was plastered with photos of ill, suffering children whose American dream had been shattered. Heart-rending (and not very Christmas-like) tales were told about the fate of orphans unable to go to their new homes.

Most active were the followers of the “cult of America,” which still blossoms in Russian bourgeois-intellectual circles. In their world view, Americans represent angels descended from upon high to save poor souls from the icy clutches of the Russian Mordor (and what sort of heel would try to prevent them from accomplishing their sacred task?) At the same time, smarter and saner minds are also repelled by the State Duma's idea.

It is worth recalling that Russia is not duty-bound to supply children to the U.S. It comes from a sense of civility and good will – rather like issuing visas. To show or not to show such good will is a sovereign matter for every individual country, and there are numerous different approaches. For example, the European Union does not recommend member states to allow their children to be adopted by foreigners, because it would not behoove a civilized society.

Poverty-stricken Africa, on the other hand, willingly releases its offspring. Regrettably, in this matter Russia belongs to the third world. We trade orphans – out of sight, out of mind. Note that this dovetails with the economic model: If Russia churns out crude oil and timber for sale abroad, then why not children? And since we have been trying to go cold turkey on raw materials for the past 20 years, the end of child exports should also be recognized as a benign intention.

But in trying to achieve this goal in one bound, are we not in danger of quite literally throwing the baby out with the bathwater? In this case, children abandoned, orphaned, and often disabled. Americans are rather quirky. They think nothing of traveling halfway around the world and paying through the nose for a child with cerebral palsy or Down syndrome.

For our part, it is a very awkward business: It is not even the export of children, but the export of human misery in its purest form. The enlightened West has developed techniques to turn such grief into something that verges on happiness, not dissimilar to extracting gas from shale. Until Russia develops such techniques of its own, the country will have to rely on foreign benefactors – above all U.S. citizens.

Duma deputies, in trying to achieve a momentary and somewhat dubious political coup de main, have put the cart before the horse. Their vociferous denouncement of American adoptive parents has opened up a can of worms: The nightmare of Russian orphanages, the killings and violence in the foster care system, the lack of proper social care for ill children.

The unforeseen result is that Duma deputies and their executive legislator colleagues will have to answer long and hard for this "bazaar" – and not to the authors of the Magnitsky Act, but to their own citizens.

I believe that the most successful way out of this sudden crisis would be to conduct an open inspection of our orphanages and their practices. Following this, the ambitious plan to phase out the adoption of Russian children by foreigners (dictated not by a desire to spite the adversary, but simply out of self-respect) would be linked to specific indicators to assess progress in this delicate matter. And, who knows: We may even discover a worthwhile national idea.

Igor Karaulov is a Russian poet and translator. The opinion is abridged and first published in Russian in the Izvestia newspaper.

American authorities have to observe the soft law against unsuitable parents who adopt Russian children, but Russian legislators, businesses, and NGOs should also be working together to offer more direct aid to the country’s orphans.

One of the main talking points of the past few days has been a law banning American parents from adopting Russian children. This issue is a very emotive one: it is more often the subject of heated, emotionally-involved arguments than reasonable debate of pros and cons.

This is fully understandable, as it is hard for any person in their right mind to remain cool and detached when the fate of a child is at stake. Unfortunately, the public’s sensitivity to problems involving children makes it easy to manipulate people and public opinion in this area.

In 2004, the Chicago Tribune newspaper reported that, since 1996, at least 12 kids adopted from Russia had been killed in the United States. If our Duma deputies feel so protective of adopted orphans, what stopped them from enforcing a similar law all those years ago?

It is fully understandable that concerns arose over the “Green Corridor” – the relaxed, no-questions-asked policy that was set up for foreign adoptive parents. You cannot hand children over to people you do not know and reassure yourself with the maxim “out of sight, out of mind.”

One of the criteria when looking for adoptive families is whether the child would be better off with them than in a state-run institution, in addition to a degree of certainty that the new parents will not starve the orphan to death or physically abuse him or her for some small misdeed. Sadly, both of these cases have precedents in the United States.

This is why Russia should be able to check how foreign adoptive parents treat newly adopted Russian citizens – do they coddle them in love and care or dissect them for their internal organs. Unless a bilateral agreement about adoption is signed between Russia and the U.S., this sort of control will be impossible to implement. Thus, it is wholly appropriate that certain restrictions should be in place for American adoptive parents.

It is vital that the American authorities take note of the soft law against unsuitable (and occasionally even malevolent) parents who adopt young Russian children. It is an accepted international norm to anchor these arrangements in legislation. We live in a civilized world, where, according to the law, the primary concern is quality of human life itself – something that should never be sold to the highest bidder.

But when discussing the legal and moral aspects of this bill, we should not become distracted away from the most important concern – the young orphans and disabled kids whose eyes light up in hope whenever a prospective adult enters the children’s home. Ultimately, it is for them that government officials are working late writing laws. These children are what the youth organizations should be focusing their attention on, rather than picketing the American embassy.

The children themselves should be the ultimate concern of noncommercial organizations; their work should be played out on a more grass-roots level, rather than being focused on attracting grants from abroad. The aim is not for the child to die in his or her homeland; the main aim is for each child to live a happy and fulfilling life. And why should the child not have the chance to live such a life abroad, if a suitable adoptive family does not come forward in Russia.

Russia needs an electronic database with information about children awaiting adoption, made available for all on the Runet. This information should be accessible to everyone in our country, and Russian citizens should have preferential treatment when it comes to adopting Russian children.

NGOs and volunteers could help put together this database, and the state could provide the funding for a centralized service that would help match children with suitable adoptive parents. If the government were to offer incentives to businesses for implementing charitable programs to help orphanages and children’s homes, this could help disadvantaged children much more (and much more directly) than affecting concern through prohibitive legislation.

I would like to end with a short story. A friend of mine told me that one of her most vivid memories of the short time she spent in Washington is of the diplomat’s family who lived nearby. Most of all, she remembers their adopted son with Down’s syndrome. She cannot forget how they doted on him and took turns carrying him. When the child cried, they comforted him, full of love and patience.

She later found out that this couple could not have children of their own. After much consideration, they had decided to take a child from a children’s home. Moreover, they decided to adopt a child with Down syndrome. This was because, in their opinion, life would be much harder for this child, and he could benefit the most from their help. It turned out that they had adopted this little boy in Russia…

When I remember this story I think about how, if this law banning adoption had been in force back then, instead of three happy people living together in a family, there would be three unhappy people living disunited on other sides of the world.

Eva Lanska is a writer and social activist. The opinion is abridged and first published in Russian in the Vzglyad newspaper.