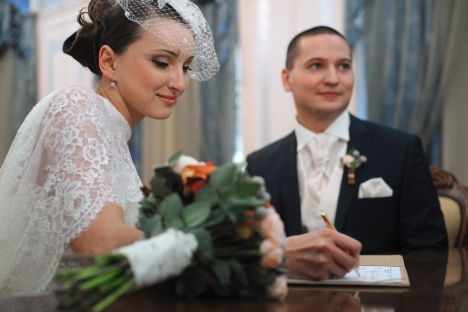 The main theme of traditional Russian weddings is splendor – not riches, but splendor. Source: RIA Novosti

From palatial halls and exotic destinations for those who appreciate beauty, to the more modest cafes and alternatives for the pragmatic urban-class, Muscovites are creating a whole range of new wedding traditions for the post-Soviet generation.

Muscovites who entered into adulthood during the 2000s currently find themselves at a crossroads. Wedding traditions from the 1990s now appear perilously tasteless, but no one knows how to do it right. New traditions are being born in the information-age twilight – some ludicrous, others just plain weird, and almost all of them prompting people to ask “why?” In other words, they are all very Russian.

The bad news is that weddings cost not only bucks – they cost megabucks. All those “alternative” weddings are usually the result of financial restraints. The good news is that Russia has no dowry tradition. The groom is not expected to make a down payment on his bride-to-be.

Still, the American tradition of proposing with a diamond ring has not really caught on yet. And there is more bad news: If in the old days it was the father-in-law who was expected to pay for everything, nowadays the groom who has to foot the bill.

Traditional Russian weddings are not so far removed from their fifth-century prototypes. The main theme is splendor – not riches, but splendor. The roots of this idea stem from a magical principle, which states that, when the guests gaze upon the young couple, they imbue them with some of their energy. Over time, people may have forgotten about this magic element, but it somehow manifests itself anyway.

The most hotly discussed topic on internet wedding forums is the cortège. A limousine is considered the height of chic, especially if it is a Hummer; but, if worst comes to the worst, a white Mercedes will do. The limo is needed for the obligatory tour of city landmarks, which might include the Eternal Flame, Poklonnaya Hills and the Cathedral of Christ the Savior.

The aim, of course, is to find the best spots for the wedding photographer to get his most beautiful shots. Ulyana F., who got married in April 2012, recalled how she chose the locations for her tour of the city. “We decided to go to the Kuskovo summer estate, in the eastern part of Moscow. Pretty dull, but it was in the same district as our house, the registry office and the place we had booked for the reception. But it was quite nice – lots of people were there.”

The reception is just as unavoidably evil as the bride’s white bell-shaped wedding dress. Venues for the reception are generally picked according to the seating-capacity-to-price ratio.

“We were looking for something in a palatial style,” said Ulyana, “but there wasn’t really any choice – we didn’t want anywhere too far from home. In the end, we found a hall seating 100 at 2,700 rubles (roughly $87) per guest.” There is not usually much in the way of entertainment: just drinks, toasts and games. The whole thing is often overseen by the “Tamada,” or toastmaster – a tradition that crept into Russia from the Caucasus.

“We didn’t want a toastmaster,” said Ulyana, “so my friend organized the party games – she likes to help out at weddings. There was a game about who could burst balloons the fastest, and another one in which the men had to find hairclips hidden on girls, blindfolded... I don’t remember them all. The game I remember most of all is the one where guests filled their mouths with boiled sweets and then had to congratulate us with their mouths full. There was a lot of dribbling...”

The importance of not being too earnest

“It was a spur-of-the-moment decision; we’d only been dating a couple of weeks. We just fell head-over-heels in love. Getting married is considered pretty old-fashioned where we come from, but it was important for us to have a church wedding. That’s why we tried to make the non-religious part as laid-back as possible.”

Anya K. works in advertising, just like her husband. In the creative industries, any throwbacks to the legacy of the Soviet Union are seriously uncool. Employees in such industries have to treat most kinds of tradition with a healthy dose of skepticism – including the cortèges mentioned above – and generally to do as much as possible to not “be a sheep.”

“Originally, we thought about having a Steampunk-style wedding,” said Anya. “Then we realized that would be a huge pain figuring out the costumes and decorating the venue. With a month to go, we decided instead to make it all as low-key as possible and just invited our friends to Mayak – a cool bar where people go for drinks on Friday evenings.”

There is an even more alternative venue than Mayak – a cafe in the converted premises of the old Red October chocolate factory on Balchug Island near the Kremlin. For many, the area is also their workplace, so they can literally celebrate their wedding on the job.

“... I went to the registry office on my bicycle. Not that I was trying to make any kind of statement or negative comment; it was just the quickest way to get there, avoiding the traffic and the crowded public transport,” said Anya.

…And slip away the same night to Baden-Baden

It is becoming increasingly popular among the well-off to elope. Businesspeople and top managers can often be seen flitting overseas for their weddings. Wedding planners say that, if you care about quality, it is actually cheaper to have your wedding in Europe than in Moscow – even taking the cost of plane tickets and hotels for guests into account.

The top location is Santorini – a Greek island with its famous blue domes against the background of white houses and an even bluer sea. But it does not really matter whether it is Greece or not. The main thing here, just as with the neo-paganism approach, is beauty; only here, it has to be the real thing, and not some kind of “hall done out in pseudo-palatial style.”

If the sky is the limit, then the bottomless pockets of the happy couple cover the rest, from plane tickets to special-made guest pajamas in celebratory colors.

Olga M. runs her own business.

“This is my second marriage. My first wedding was in the tried-and-tested student style: our parents blew all their savings on a more-or-less ‘decent’ wedding. Now, I'm less bothered about ‘decency’ and more interested in having a beautiful ceremony. That’s why we’re getting married in a Czech castle. The color-scheme is lilac – the clothes for the guests, the labels on the champagne-bottles, the transport, the ceremonial ribbons, everything. The entertainment includes riding in carriages and a chivalric tournament.”

And it does not stop at Czech castles. All kinds of themed weddings are popular: for example, a James Bond wedding theme in which the groom arrives in an Aston Martin and the guests play the roles of MI5 agents. If not, then maybe a mafia-style wedding in Sicily? Guests are decked out like gangsters, while local musicians are hired to twang out the theme from “The Godfather.”

Generally speaking, it is the wedding planner’s job to keep the happy couple’s runaway imagination in check. If our secret sources on the costs of such events are to be believed, a wedding arranged abroad will usually cost millions of dollars – not including the bride’s trousseau, of course.