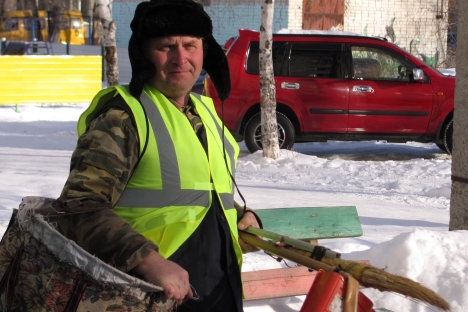 Sergei Nifashev, a janitor who is entirely satisfied with his profession. Source: Irina Korneeva

He claims that his profession is undervalued by society, yet few would guess at the decent income it can generate.

Sergei Nifashev is a janitor. For six years, he has been sweeping yards in Blagoveshchensk — a city separated from China by the Amur River, and from Europe by thousands upon thousands of miles. What is more, Nifashev is entirely satisfied with his social and professional status.

Sergei has lived and worked in Russia's Far East for more than 20 years. Despite the very hot summers and biting winters, this 57-year-old, who was born in Leningrad and graduated from military school, sees more pros than cons in the work of a janitor.

“I'm free! There's no one above me," said Nifashev. "The bosses sit all day in their office and try to keep their distance — I haven't seen any of them for months. They go by the calls they receive from senior citizens and the residential community. If the grannies are happy, then all is well. Grannies have very high standards.”

He also dispels the stereotype that yard cleaners are unskilled with no qualifications. His team consists of 11 janitors, seven of whom have a university degree, notes Nifasheva. Incidentally, most of his colleagues are women: one used to work for the regional administration; another is a former head accountant; and a third is the former boss of a furniture factory. And there is even a former commander of a TU-195 strategic bomber!

Despite his bubbling enthusiasm, as a young man, Sergei Nifashev could hardly have imagined that one day he would become a janitor. His grandfather and father were both soldiers from Leningrad, and it seemed he was destined to follow in their footsteps, graduating with honors from Leningrad Higher Political School. Since childhood he has been an avid reader.

"We had a swell library," he says. "Most of the books I got from my grandmother — she was the governess of the children of Count Lazarevsky in Czarist times. She spoke flawless French and German."

After graduation, as a top achiever and, in his own words, one of the best in his class, Sergei was free to choose where he wished to serve. Rather unusually, he opted for the Far East.

"Volcanoes and romanticism, what more do you need," says Sergei. "Plus my young wife was able to find work in her chosen field."

Khabarovsk, Vladivostok, Belogorsk... But soon Sergey Nifashev was forced to put an end to his journeys and his military career.

"I got in a terrible car crash that resulted in a head injury," he said. "It meant I could no longer serve in the military. I took a job as an electric welder; my wife left me, because she treasured her social status. I married a second time and moved to Blagoveshchensk to work in a factory. I got a preferential labor pension in 2006 and started work as a janitor."

In his spare time, this intellectual yard sweeper published articles in local newspapers and magazines. Over the course of several years, freelance reporter Nifashev produced thousands of publications on a wide range of topics. More recently, he has become known in the Amur region as a blogger. He publishes online articles, poems, and short stories, and he chats with his readers, of which there are more than a few.

The whole region now knows about this rather unusual janitor — and his celebrity does not stop there. He has appeared several times on local and national TV. "And last year," he says proudly, "I was even asked to arrange a master class for a delegation of Chinese janitors visiting Blagoveshchensk from Heilongjiang province. I gladly demonstrated my inventions: non-standard brooms, shovels, and scoops that I built myself."

Nifashev receives more than 40,000 rubles ($1,290) a month for his work, and he is proud that his salary is above average for the area. He plans to spend it on a new car for his son, his sweetheart, a vacation, or maybe a trip to his distant birthplace in Leningrad (as he still calls it). Generally, Sergei lives modestly and spends little on himself.

Sergei Nifashev is convinced that his profession serves as a weathervane for all layers of Russian society. There are people who always greet janitors, some who "curse at the slightest trifle," and others who do not conceal their contempt.

"I try to begin work early and away from residential areas," Sergei says.  "I wear a helmet, especially in summer. Because when you're mowing grass, someone always yells out the window: ‘Hey, my kid's asleep!’ They pour water into a plastic bottle and throw it at your head. That's just one of many such anecdotes. But I don't get offended. I was weaned on the ideals of service and the psychology of a man in uniform. I have understood it’s the most worthwhile occupation. One should live for others. To live for oneself is not interesting — I would even say it's boring."