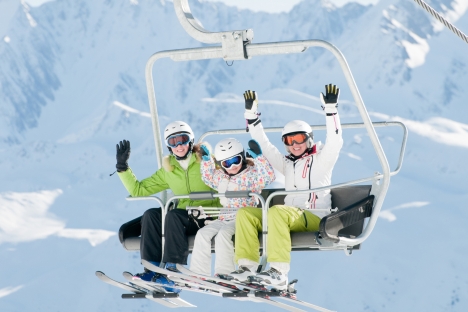 Some Russians prefer to spend their winter holidays in ski resort cities in Germany and Austria. Source: PhotoXPress

The number of outbound tourists from Russia increased by 20-25 percent in 2012 and is expected to reach approximately 11 million organized tourists (i.e., those who purchased package tours from operators), according to Maya Lomidze, executive director of the Association of Tour Operators of Russia (ATOR). In the first nine months of the year, 8.4 million Russian tourists took trips abroad.

According to Rosstat, 12 million tourists crossed the Russian border in January-September 2012, up from 11.2 million tourists in the first three quarters of 2011. “We only count those who buy package tours, while Rosstat calculates everyone who indicates ‘tourism’ as the purpose of their foreign visits,” Lomidze said, explaining the difference in the figures.

The most popular travel destinations for Russian tourists remained unchanged: Turkey, Egypt, China, Spain, Greece and Thailand account for about 60 percent of all organized tours.

Turkey is still the leader in terms of the number of tours sold in Russia: 2.3 million Russians visited Turkey in Jan.-Sept., Lomidze says. In fact, ATOR had expected more tourists; but due to a 5-7 percent increase in fees, operators phased down some of their programs and there were no last-minute cheap offers.

As a result, the Turkish segment showed a 10 percent increase, according to Lomidze, whereas Rosstat reports that the number of visitors fell from 2.47 million tourists in January-September 2011 to 2.3 million tourists in the first nine months of 2012.

One of the main growth drivers for organized tourism has been renewed demand for tours to Egypt. The number of tourists visiting Egypt rose by 40 percent to 1.2 million people in the first three quarters of 2012 from the same period in 2011 Lomidze said. Anex Tour saw demand for tours to Egypt go up by 60 percent, a spokesman for the company said.

Tour operators also point out the growing interest in China, in part due to the fact that the year 2012 was declared the year of Russian tourism in China and of Chinese tourism in Russia. Hundreds of events were held to promote tourism between the two countries. However, increased transport costs became a serious obstacle to tourists.

There are significant differences in the statistics representing the number of Russian tourists who visited China in the first nine months of the year. Tour operators claim the figure is about 1 million visitors, whereas Rosstat says it was approximately 400,000 tourists. Tour operators expect a 5 percent increase in the number of organized tourists to China this year.

Spain officially announced this year that it had welcomed the one-millionth tourist from Russia; however, neither Rosstat nor ATOR analysts have confirmed that the number of Russian tourists to Spain has reached 1 million this year. This could be attributed to the fact that Spain offers tourists multi-entry visas, and travelers often go to Spain again without the help of tour operators.

Rosstat does not take into account the final destination of the tourists who make connection flights. As a result, the official statistics could have skipped many tourists who fly to Europe using low-cost airlines and change flights in other countries. Rosstat has reported a 22 percent rise in the number of Russian tourists who visited Spain, up to 690,000 people, while tour operators and Spanish travel authorities report a 30 percent increase to 750,000 tourists.

The year 2012 saw the end of price wars in the Greek segment of the market. No new players were registered this year. Despite the lack of cheap offers, the number of organized tours rose by 20 percent, exceeding 600,000 trips. Tourism to Greece was promoted by 5-8 percent discounts from hotels and a lenient visa policy of the consulate, which took from two to three days to issue visas for Russian tourists.

More than 300,000 Russians visited Cyprus in 2012, an increase of 25 percent from the previous year. This was a result of the doubling in the number of flights offered by Cyprus Airways and Rossiya. More than 45 percent of all visits to Cyprus were booked at least a month in advance. The 10 percent slump in the British market this spring did not prove significant enough for a large number of hotel rooms to become vacant, though.

For the first time, the German segment showed a significant increase of 20 percent. Some 300,000 Russians visited this country; however, Rosstat cited an even higher figure of 530,000 Russian tourists. Experts note that the number of tourists increased in spite of many obstacles. Germany still employs a strict visa policy with respect to Russia, and operators had not expected such a significant increase in the number of visits.

Nevertheless, some factors had a positive impact on Russian tourism to Germany. Specifically, Germany has opened new visa centers in Russian cities. Tour operators are extending their product lines to attract new visitors. Ural Airlines has launched a new Moscow-Cologne flight. The country is also a popular transit destination or one of several destinations in traditional package tours.

Most operators focusing on Italy managed to avoid dumping fees and financial losses this year. Prices only began to fall in the second half of October, when one-week packages were available at 160 euros ($210). Travel agencies report a 15 percent rise in the number of Russian organized tourists who visited Italy – up to 350,000 people. Rosstat reports a higher figure of more than 460,000 Russian tourists who have visited Italy so far in 2012.

Although prices remained high in Bulgaria and tourists were discouraged by reports of the poor epidemiologic situation in that country, the number of Russian visitors to Bulgaria rose by 15 percent in 2012 – mainly due to this country’s favorable visa policy. More than 350,000 Russians visited Bulgaria this year.

“The Bulgarian market is large enough for more tourists from Russia. Most people seek beach recreation in Bulgaria. I believe that balneotherapy and children’s trips will be among the fastest-growing segments next year. When it comes to children’s vacations, Bulgaria plans to revise its requirements for this type of recreation based on recommendations by Russian tour operators,” Lomidze said.

The United Arab Emirates (U.A.E.) was the breakthrough of the year 2012 for the Russian travel market. This country became sort of an alternative to Egypt and demonstrated an astonishing 60 percent growth rate, welcoming more than 300,000 tourists from Russia.

This result was mostly due to the increase in regional transportation. Eight airlines (four from Russia and four from the U.A.E.) performed regular flights to the U.A.E. from eight Russian regions – even during the low season in summer. Due to the excess number of flights in October and November, new hot offers appeared. Not only Dubai, but other new destinations became popular among Russians: including Fujairah, Abu Dhabi, and Ras al-Khaimah.

Average length and cost of tours

Most Russian tourists (54 percent) selected tours lasting between eight and 14 days in 2012; however, the number of shorter trips has been growing, especially for European destinations. Longer tours of 15-21 nights are common for more distant destinations. The proportion of tours longer than three weeks has also been growing. Egypt has become an increasingly popular destination for longer tours. Russian travelers have also been buying longer tours to Bulgaria.

Tours available at $1,000-2,000 were most popular this year. However, this runs counter to the results of a VTsIOM study, which stated that most Russians are only ready to spend $500 on vacations. In 2012, the average price of package tours acquired in Russia markedly grew from a price range of $600-1,200 last year.

New Year tours are selling at higher rates than regular trips as usual. The cheapest New Year offers were Egypt and Thailand. Trips to Egypt with accommodation at a 4-star hotel were available for $1,200-1,500 per person. “You won’t find tours at these prices now. You can buy a tour a few days before departure for $2,000-2,500 per person,” Lomidze said. Popular New Year destinations such as the Czech Republic were available starting at 2,000 euros. Cheaper New Year package tours were sold out back in September and October.

Independent tourists who do not buy tours from operators accounted for about a quarter of all Russian travelers who chose foreign destinations this year, says Svyaznoi travel (airline and hotel booking) CEO Alexei Dorosh.

About 3 million people traveled abroad on their own this year, an increase of 15 percent from 2011, says Dmitry Gorin, general director of VIP-service ticket sales company.

ATOR agrees that the independent tourism segment has expanded by around 20 percent. However, according to Lomidze, the two segments coexist, and independent tourism does not “steal” customers from operators. The average Russian tourist generally switches to independent travels after two trips with a tour operator, Dorosh says.

For many Russian tourists who are not ready for independent travels yet, the tour operator serves as a guarantee for their safety, a spokesman for Anex Tour says. People most often choose to travel on their own for educational purposes – to see new sights or to attend events. Although, sometimes it is impossible to book a room at a resort hotel because the booking system does not work with individuals, Gorin explains.

The article is combined report based on materials from Association of Tour Operators of Russia and Vedomosti.