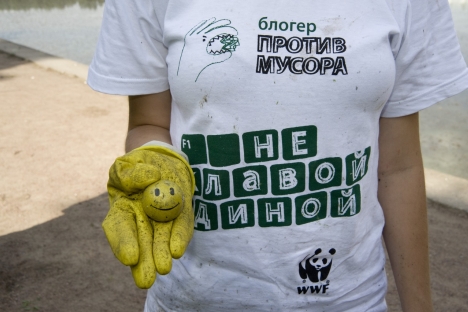 More than 30,000 people all over Russia cleaned up their neighborhoods, parks and river banks by removing waste material that had been illegally disposed of in public spaces in the framework of the Blogger against Garbage project. Source: Press Photo

With communism now resembling a historical instance of a massive crowdsourcing project, it is safe to say that Russians are no strangers to the methods of this seemingly recent phenomenon.

Crowdsourcing emerged relatively recently on the wave of widespread Internet use and information accessibility, but its elements have been known in Russia for decades.

One example is the comments book that has been used in various institutions in Russia since Soviet times. The feedback provided in the book helps an organization to gauge the mood of its customers and assess the services it offers. The most powerful crowdsourcing project in the Soviet Union, of course, was communism, which envisioned free labor by every member of society but turned out to be a major failure.

Despite the failure of that project, Russians are still utilizing the crowdsourcing method to this day.

Current crowdsourcing projects in Russia include an upgradable mapping system on Yandex’s search engine, a campaign to clean up garbage in public areas, and a user-based travel portal that will help Russians discover wonderful sites in their own country.

People’s Map on the Russian search engine Yandex, for example, is compiled and edited by Yandex users. Ordinary maps are sometimes not quite accurate. A map may show a road, but that road turns out to be no longer in use: It is closed off with cement blocks, but there is a bypass 3 miles away. Users adjust the map themselves by adding explanations, making corrections and placing the names of locations.

It was not Yandex that came up with the idea – OneStreetMap and Wikimapia were the first to launch such projects. Unlike its Western competitors, however, Yandex developed a simpler user interface for making adjustments, so that even users with no knowledge of cartography are able to work with the map.

“Since the service was launched two years ago, our users have contributed to making detailed maps of 407 Russian cities. Some 200,000 people create new charts and provide updates for existing maps for the People’s Map. Just like in any other crowdsourcing project, most of the work is done by a relatively small proportion of users – 80 percent of the adjustments are made by 13 percent of our users. Interestingly, two-thirds of the most active users are males,” said Pavel Glushchin, head of People’s Map on Yandex.

Similarly, popular blogger and traveler Sergey Dolya has organized a Blogger against Garbage campaign for the second time in two years. This is a nationwide crowdsourcing project aimed at encouraging people to collect and remove waste. On Sept. 14-15, more than 30,000 people all over Russia cleaned up their neighborhoods, parks and river banks by removing waste material that had been illegally disposed of in public spaces.

The participants were informed about the initiative exclusively via blogs and social networks, and no administrative resources were involved.

“Last year, about 16,000 people took part in the first event – and they were working for the idea, not for some perks,” wrote Dolya. “It is important that people went out to do hard manual work and not to stand somewhere with a slogan. This year, more than 30,000 people took part. We had sponsors who provided tools, bags for garbage and gloves, and organized garbage disposal. The participants received T-shirts with the logo, but I am sure that they were not working for the shirt, because they do care."

Sergey is working on another crowdsourcing web project: a website that will be developed from the contributions of its users, the way Wikipedia works. The website will be a travel portal about Russia, with reports on users’ visits to cities and places of interest, as well as recommendations for travelers. Dolya wants to help Russians learn more about the exciting places to travel to in their own country. The project will be launched in March or April 2013.

Another crowdsourcing project in Russia gave citizens the chance to help put together an impressive program of impromptu jazz performances. This May, Penza played host to the international music festival Jazz May: a truly remarkable event organized by volunteers. The creators of the festival invited everyone to contribute, and many enthusiasts from Penza and other Russian cities answered the call.

The program included performances by musicians from Russia, Austria, Poland, the United States and other countries. Through the efforts of its organizers, Jazz May spread throughout the city and went beyond the framework of a traditional musical event.

“When we were preparing the festival, we arranged a forum, inviting everyone to share their ideas on one condition: If a person comes up with some idea, he will be included on the steering committee and see to it that the idea is implemented. Many ideas were screened, because people often turn out to be narrow-minded and propose trivial things. The festival thus turned into an awareness campaign, as we tried to show people something new, going beyond the common understanding,” said Svyatoslav Murunov, Jazz May producer.

A jazz bus ran in Penza streets, with musicians giving impromptu performances at various locations. The festival was conducted at many venues throughout the city and featured not only music but also displays of photos and modern arts, crafts and much more.