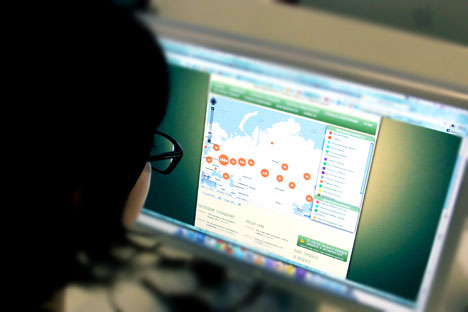 Every day, in search of response and support, Russians use the websites of various social projects to report missing family members, parking problems or grievances against the housing and utilities sector. Source: RBTH

If the number of social projects popping up every day on the Russian internet is anything to go by, then Russian civil society is already up and running. Meanwhile, many Russians are still suspicious of such projects and the information they spread. Moreover, only a small percentage of Russians are ready to translate their online activities into real life.

According to a poll held by the Public Opinion Foundation, roughly 38 percent of Russians believe that they can find a solution to their everyday or social problems online. Moscow residents have already grown accustomed to sharing their mundane troubles on the appropriate internet platforms. Every day, in search of response and support, they use the websites of various social projects to report missing family members, parking problems or grievances against the housing and utilities sector. Although Russians do believe that the internet can really make a difference, about a third of them (33 percent) question the reliability of information posted on the web.

This constitutes a very controversial background against which the Russian-style virtual civil society operates. RBTH has made a list of the top five non-profit Internet services most significantly contributing to its formation.

One of the first manifestations of a genuinely massive civic engagement on the Russian internet were the volunteer activities during the forest fires in 2010. The Help Map project became the main instrument for coordinating people’s efforts, with almost 100,000 unique users visiting the website within a week of its launch.

The international geo-social project OpenStreetMap was instrumental in dealing with the aftermath of the floods in Krymsk, Krasnodar Region, in July 2012. “Volunteers in Krymsk realized that no detailed map of the town was available. They were collecting targeted aid and could not locate the streets and houses they needed. They asked for a map to allow them to provide aid faster. We created the map in literally two days, and it can be downloaded into GPS navigation devices. The project brought together roughly 60 people,” Ilya Zverev, a volunteer from St. Petersburg, said. OpenStreetMap can be edited by any user, and the accuracy of the data added is monitored by all users of the project.

The service allowed eyewitnesses to add new points of fire outbreaks on the map, as well as informational messages – text, photo and video – from blogs, social networks and mass media. Information was grouped under several topical or functional categories: “fires,” “blocked off roads,” “in need of help,” “want to help,” and so on.

“The Help Map was not created merely to monitor fires. It was very important to combine all individual efforts on the Internet into a single coordinated system of assistance in emergency situations,” the project’s creator, journalist Grigory Asmolov, said. After the Map of Fires proved a success, new maps and other similar web resources were launched, including a Cold Weather Map and an Emergency Help Atlas.

The volunteers of the Patients in Control project are not expecting any favors from the Russian healthcare system, but are instead reaching out for an appropriate level of medical services for patients with infectious diseases (AIDS and TB).

Although Russian law stipulates that treatment must be provided to all who need it free of charge, regrettably, this is not always the case.

Initially, Patients in Control was a resource run by HIV positive people who, for various reasons, found themselves unable to obtain vital drugs. They later joined forces with the non-profit organization International Treatment Preparedness Coalition (ITPC). Together, they launched a website to collect information on the lack of vital drugs or therapy across Russia. Through its online activities, the Patients in Control project has helped over 15,000 HIV and TB sufferers receive antiretroviral drugs in the past two years.

“We created RosPravosudie to give people an opportunity to make informed decisions when choosing a defense lawyer or a proxy, to give people an instrument to assess the work of lawyers and judges,” one of the project’s creators, internet analyst Gleb Suvorov, said.

The website offers detailed judicial statistics based exclusively on public information. It also contains information on the areas of specialization of 710,000 defense lawyers, based on the number of cases won. The portal also allows users to examine the list of decisions made by any one of the 53,000 judges it profiles and assess the judicial profile of 84 regions of Russia.

The DomDvorDorogi service attempts to instill a culture of everyday social activity in Russian internet users. Its creators, lawyers Ksenia Mushchina and Dmitry Levenets, are positive that the only way to boost the quality of housing and utilities services in Russia is through public control.

It also features links to the government websites where the complaints should be filed, as well as sample official responses to various issues.

A night at The Human Library

“We have proven that the housing and utilities sector does not start working as it should until someone complains. The more similar complaints they get from different people, the faster the officials get to work repairing our houses, gardens or roads. The key is to know exactly where to turn in order for your voice to be heard,” said Dmitry Levenets.

According to sociologists, only 5 percent of Russians give money to charity.

The main obstacles to charitable giving are difficulties involved in direct cash donations and doubts as to whether the money will ever reach its intended recipient.

The One Minute Internet project has come up with a fundamentally different, noncash charity format. All users need to do is to follow the website’s instructions and either register or watch a commercial. Either way, advertisers pay the One Minute team and the team then makes targeted donations.

As a result, advertisers get efficient campaigns and charity funds get a new source of money. The absence of direct cash donations helps substantially alleviate distrust. Over the course of one year, more than 50,000 people participated in the project, donating some 300,000 minutes of their time.