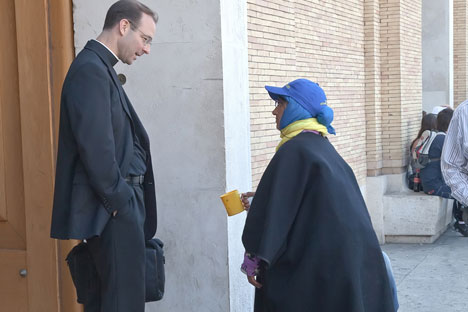 Poverty trap: many still live below or close to the poverty line in Russia while the number of billionaires is growing. Source: Lori / Legion media.

The rich are getting richer in Russia while the poor are staying the same despite rising living standards, according to statistics.

It’s a fairly well-established cliché: Russia is the land of a few mega-rich oligarchs who plunder the country’s raw material wealth, while millions of poor people scrape by on stingy state handouts and miserly wages almost oblivious to the rising standard of living.

Every year, statistics bear out a widening gulf between the rich and poor, despite the growth and consolidation of the middle class. According to Wealth-X international research cited by Rossiyskaya Gazeta, Russia ranks second in the world for the number of dollar billionaires it has: an estimated 97 – up from 80 in 2011. And these 97 mostly men own $380 billion.

The 18 million Russians who live below the poverty line collectively also own 380 billion, but in this case 380 billion rubles.

The government-enforced minimum wage currently stands at 4,611 rubles ($150) per month, despite an estimated minimum real cost of living of around 6,200 rubles ($200) per month.

FBK, a Russian auditing company, recently ranked Russia towards the bottom of a 52-country table that compared minimum wages against purchasing power, concluding that minimum wages were way out of kilter with the cost of living.

According to the State Statistics Service’s published Funds Coefficient, an indicator that measures the richest against the poorest segments of the population, the rich have continued to grow richer while the poor have stayed more or less in the same position. In 1995, the coefficient was 13.5 and it has risen steadily (despite a dent around the economic crisis) to 16.1 in 2011.

“This indicator has constantly been increasing. It is basically evidence of the widening gulf between the rich and the poor – the most wealthy layer of society and the least wealthy,” says Anna Bogdyukevich, a macroeconomics and fixed income  analyst with the ATON Capital Group.

“This has been the trend throughout the Nineties and the 2000s, and has continued in recent years.”

$150 is the current state-enforced minimum monthly wage. The estimated real minimum cost of living is thought to be around £200. 97 billionaires now live in Russia, according to Wealth-X research published in Rossiyskaya Gazeta.

Dig deeper, though, and the picture is slightly more nuanced. GDP has jumped from $260 billion in 2000 to $1.86 trillion today, and fewer and fewer Russians live below the extreme poverty line – a signal that rising living standards have trickled down.

According to Natalya Bondarenko, a sociologist at the Levada Centre, in the mid to late Nineties, 15 to 20% of Russians considered their income enough only to buy food as opposed to just 5 to 6 percent of Russians who say the same thing now.

The make-up of the poorest has changed, too. In the Nineties the poorest were employees at state-financed organisations and, particularly, pensioners but now it is working-age adults with families who have not been successful in the labour market or failed to get a job completely, according to Ms Bondarenko.

The reason is that the government has relied less on legal measures to alleviate poverty and more on state handouts – nowhere more evidently than in the pensions sector; state statistics show there was a steady rise in pensions to an average of 8,200 rubles per month last year.

Bondarenko says government spending has brought state employees and pensioners above the poverty line. But the government is criticized for simply throwing money at the problem without addressing the root causes of poverty properly. Bondarenko recommends that the minimum wage be raised.

“The government just pumps money in," she said. "This is not the policy pursued in western countries. They don’t give people the fishing rod so that they can catch the fish; they simply give people the fish. As a result, these people remain dependent and open to manipulation, and so on.”

According to the state statistics service, Rosstat, a total of 18 million – or 13 percent of the population – live below the official government poverty line. However, analysts say that the real poverty figure is much higher.

“The poverty line in Russia is considered very low,” said Bogdyukevich. “If we compare it with indicators in Europe, we have a consciously lower index for the poverty line. As a result of that, we appear to have fewer people who live below it.”

Thanks to a few other Russian quirks, it also scores well against other countries in terms of the global Gini coefficient, the respected indicator which measures income distribution by taking into account a range of wealth indicators, including property.

The closer to zero a country scores, the more equal its estimated income distribution. In 2010, Russia scored 42 (down from 39.9 in 2001), which makes it more equal than the United States and its BRICS peers.

However, there are various reasons for Russia’s relatively good performance in this indicator, such as the collapse of the Soviet Union – which triggered rapid, mass-scale housing privatisation when the government simply handed ownership of state apartments to its citizens.

The statistics are also potentially skewed, as the rich are notorious for taking their wealth out of the country, and some high net worth individuals are infamous for keeping their savings out of banks and thus off the radar.