Lifestyle
Igor Rozin
based on RIA Novosti and Foreign Policy 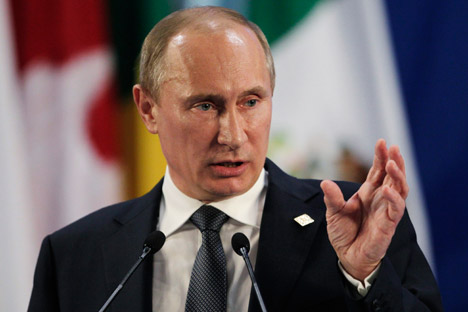 An article in leading U.S. magazine Foreign Policy has named Putin as the most powerful person in the world, although the top spot left empty.

The author, Ian Bremmer, president of the Eurasia Group, explains why no one is ranked first as being because “in a G-Zero world, everyone is waiting for someone else to shoulder responsibility for the world's toughest and most dangerous challenges.”

He based the ranking on "a quick, informal survey around Eurasia Group on power and global politics."

“The leaders you'll see named further down this list are preoccupied with local and regional problems and don't have the interest and leverage needed to take on a growing list of transnational problems,” he wrote.

After the top spot's empty chair, Putin comes in second.

“In Russia's personalized system, this is still the person who counts," the magazine said. "He isn't as popular as he used to be, and his country has no Soviet-scale clout or influence, but no one on the planet has consolidated more domestic and regional power than Putin.”

This article has been widely reported in the Russian media as being a Foreign Policy ranking that names Putin as "the most influential person in the world," although the article itself makes no such claim.

Joshua Keating, editor of Foreign Policy magazine, says in his article appearing on the magazine's website that Bremmer's post, which created a buzz in Russia's media, does not reflect the real position of the publication.

"It wasn't Foreign Policy, but one FP blogger; it's not an annual feature, and the item did not appear in the print magazine," Keating said.

While talking about Russian media's coverage, Keating noted that Russian journalists "leave out Bremmer's not-so-flattering reason for putting Putin on the list."

"ForeignPolicy.com is getting a little more .ru traffic today, since the Russian media seems to have picked up on Ian Bremmer's list of the world's most powerful people," said Keating.

Still, some Russian pundits argue that Putin's leading position in the Foreign Policy blog indicates that the West lacks political leaders who can tackle the current economic and political problems.

President of National Strategy Institute, Mikhail Remizov, believes that Putin overshadows other political leaders because he has been enjoying much more power for a longer period of time – and both Russian and Western experts make no bones about this, he added.

Another reason of Putin's high entry on the Foreign Policy blog ranking is the lack of bright, strong and extraordinary leaders in the West.

Likewise, Russian political expert Dmitry Badovsky argues that the Foreign Policy blogger decided to leave the top spot vacant just to point out to the leadership crisis in the West.

In addition, Badovsky mentioned Putin's victory in the 2012 presidential election and his attempts to flex Russia's muscles on the international arena.

"Putin's return to the position of the Russian president and his project of creating of the Eurasian Union are among the most important trends in the geopolitics of 2012," Badovsky said.

The article is based on materials from RIA Novosti and the Foreign Policy magazine.