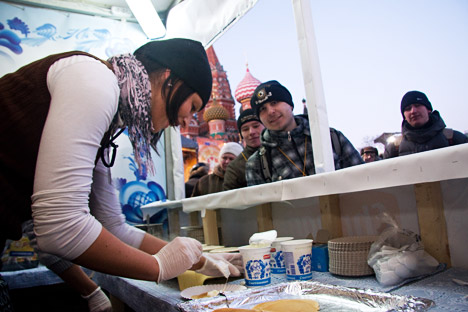 Those who take their skates to Red Square will find salad Olivier, borsch and beef Stroganoff at the self-service cafeteria. If guests fancy something more interesting, they will have to move in the direction of GUM. Source: ITAR-TASS.

New kinds of street food have started to appear on the Moscow scene. Many venues, from parks to ice rinks, are now filled with stalls selling pine-tree juice and red wine cockerel.

There is a farm hen bubbling away in red wine in a cast-iron pot. “Are you sure it’s a rooster? Or is it a capon? And what wine exactly is it?” asks a demanding man. “What’s difference does it make?” they pipe up from behind him. “Well, if the sign says ‘Ferma’ (Farm), that ought to apply to everything on sale!” This is the kind of interchange overheard every weekend at the Ferma Kiosk in Gorky Park.

All the products Maxim Livsi has to offer are from his own shop, Ferma At Home. The catering company Williamsburg uses these same ingredients. In the summer, Livsi and catering company founder Fyodor Tardatyan arrived at the festival in Gorky Park to offer burgers with rosemary and sweetcorn with manchego cheese sauce. By the end of the season they had been approached with the idea of opening their own food kiosk. Williamsburg is right by the ice-rink – skaters can drink hot cocoa and eat Hereford burgers or sweetcorn soup with Mexican spices.

Ferma is already a well-established shop, and, in addition to the regular menu, something new is available every weekend. In January they promise to have Irish stew, duck hotpot with prunes, or turkey meatballs with fennel and tomato-basil sauce – all for 250 rubles a portion (around $8).

“We’ve created a menu like no other: it was one of the things the park administration insisted on,” says Fyodor Tardatyan. “This is new-wave street food – the kind that’s appearing fast at parks and ice-rinks – and it’s much more individual than regular fast-food. People don’t put blind faith in chain distributors and are more inclined to trust one-off projects, where the chef prepares the dishes from scratch and controls all the stages of the process.”

There is a pretty wide range of choices available in the park. Noodle experts Wokker are offering a specialized menu for the park that focuses on rice and noodle boxes; Khachapuri are offering a Georgian kind of fast-food, like Imeretian khachapuri (hot cheesebreads and chicken wraps); Tea Heights have opened their Samovar-Bar Pueroport at the ice-rink.

The bar offers Russian samovars that pour boiling water onto over three dozen different kinds of special teas, with the addition of syrups, fir cones, fir-tree juice and forest berries. Hungry visitors can stop for a bite at the yellow stands of Park-Pizza: this is Gorky Park’s own project, offering 11 kinds of pizza cooked in wood-fired ovens right by the ice-rink.

Those who take their skates to Red Square will find salad Olivier, borsch and beef Stroganoff at the self-service cafeteria. If guests fancy something more interesting, they will have to move in the direction of GUM.

The Fair at the Rink was set up with tourists in mind. “Lots of people come to Red Square hoping to buy presents and souvenirs, so we set up the Fair in a Russian style, offering traditional food, national costume and toys,” says Natiya Pkhakadze, the project manager. Across from St. Basil’s Cathedral there are women’s headscarves for around 700 rubles (almost $25), or, down at the other end of the rows, “valenki” are for sale(traditional felt boots).

Nearby there are pies on sale, “baked by Old Russian recipes.” The big ones are baked with apple and cranberries, blackberries, blueberries or chicken. The small ones have fillings with meat, cheese, strawberry, cherry, or apple and cinnamon. The small oven is right in the window, and guests can enjoy hot pie with tea from the samovar or with “sbiten” – a traditional Russian hot drink brewed from a choice of juniper, spices, berries or mint. Pre-revolution-style boiled sweets are also promised in the days ahead.

There is a very rational approach to the organization of winter catering at Sokolniki Park. Each of the kiosks arranged around the circular ice-skating venue has something different of its own. One has doughnuts, another has “chebureki” (greasy meat pasties), while others are offering pancakes, or thin, meat-stuffed, Middle-Eastern breads.

On the Fountain Square a new project is due to open before the year is out – the Four Kitchens Restaurant. An opinion poll was held on the website: what four kinds of cuisines would visitors most appreciate? The winners were American, European, and Pan-Asian; the fourth zone will be a patisserie.

The American food is promised to be the most “mobile” – burgers, sandwiches, french fries, and corn cobs that can easily be taken to the skating rink. Rice and noodles with sweet-and-sour pork or prawns and oysters, or creamy chicken curry, or ginger-cooked salmon all make for convenient eating straight out of the carton. The European menu offers Siberian dumplings, ravioli, Ukrainian sweet-boiled dumplings and “khinkali” – all with disposable, heat-retentive bowls for those who prefer to eat on the move.

The skating rink at the Hermitage Gardens has a cafe with hot drinks and simple food. However, the main street food is located a bit further down, at a van called Gifts of Nature that was created by the gastro-bar team at Delicatessen. During the summer and fall the van toured festivals and picnics; by winter, Gifts of Nature finally put it in park in Moscow.

Some dishes are almost always on the menu: fish sticks of White Sea cod in fine breadcrumbs, hotdogs with sausages specially made on a farm in the Tula region, chicken confit, potato wedges with celery salt, and robust Russian pancakes with ginger jam. However, as their Facebook blog advertises, the Gifts of Nature team is also actively offering a host of extra treats alongside the usual menu – there are specials every weekend. For example, there are hot sandwiches with cheese, kimchi and bacon, or French toast with caramel crust and jam.

On the Gifts of Nature webpage they regularly announce the opening hours; the van is theoretically open from Friday to Sunday, from noon until 8 p.m. In reality, they are often open later, though they might close up early due to frost or maybe drive off on some special project.

The van is offering a new menu for January. Ivan Shishkin, the head chef and project manager, is planning to increase the portions and drop the prices. There is also a new sandwich place called Butterbro open by the Hermitage entrance. They will be baking their own bread and making dozens of sandwiches with farm produce. They are planning to offer sandwiches five days a week.

Near the Stone Flower fountain atVVC (formerly the VDNKh exhibition grounds)there is an ice-rink with an adjacent Christmas Market, which features things to eat on sale, as well. Following the tradition of the VDNKh “Exhibition of Economic Achievement of the USSR,” the Fair presents all kinds of achievements from different national economies.

Near the Azov patisserie there are Lipetsk and Podolsk sausages, while, alongside mushrooms and apples from Tver Region, there are sweets from Kazakhstan. For 20-25 rubles (less than $1), visitors can have a slice of Pokrovsky or Moscow gingerbread and tea or coffee. Moscow gingerbreads are ginger-flavored, while the Pokrovsky variants are either glazed or jam-filled.

There are more interesting sweetmeats near the sign that reads “Konfetki,” where there are items from the Kazakhstan sweets producer “Rakhat.” For example, there is “aigerim” (milk jelly with added cognac and chocolate glaze), or “gudder” (milk jelly creme-brulee with rum flavor and condensed milk), or vanilla-peanut “Abai’s Song.”

Anna Turina is a columnist for Vash Dosug magazine.