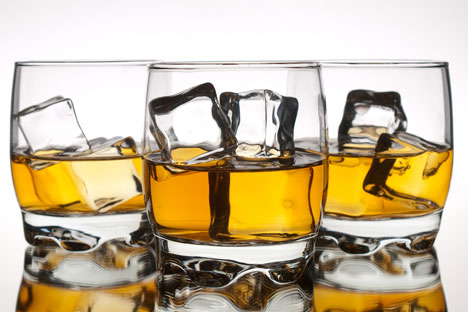 According to the Federal Customs Service of Russia, deliveries of spirits from abroad rose by 25.78 percent in the first half of 2012. Source: Lori / Legion Media.

The Russian spirits market is undergoing a significant upheaval, which foreign companies are looking to exploit: as a result of the recent hike in excise tax and the slashing of the cheap segment, consumption of strong imported beverages is on the rise.

The most staggering growth in sales has come from whiskey and rum, up last year by 66 and 57 percent, respectively. Nevertheless, all records this year belong to tequila (similar in some respects to vodka), with a positive jump of 58 percent. According to the international analytical agency IWSR, the Russian tequila market will soon be amongst the largest in the world.

The raging popularity of foreign drinks in recent years has become so obvious that Russian companies are already considering producing them domestically under their own brands.

William Wemyss, president of small Scottish distillery Wemyss Malts, had never been to Russia before. But late last November, when the streets were already covered with snow, business brought him to the Russian capital. Having made the decision to sell his own brand of blended malt whiskey in Russia, Wemyss took part in the annual Whisky Live Exhibition in Moscow.

From behind a stand, dressed in traditional Scottish attire, Wemyss played the part of bartender, regaling visitors with shots of whiskey and tales of how the beverage had been passed down through the generations. It seems that Wemyss was right to bet on the Russian market — Russian consumers now prefer imported drinks.

According to the Federal Customs Service of Russia, deliveries of spirits from abroad rose by 25.78 percent in the first half of 2012. Moreover, excluding imports of vodka from CIS countries, a majority of Russians prefer whiskey: its market share now touches 25 percent, and, in 2011, sales of the drink outstripped premium vodka for the first time ever.

Despite a marginal slowdown in imports after the boom of the last decade, the Russian spirits market still harbors enormous potential. "If you take a period of, say, 12 years, the volume of spirits imported into Russia, excluding vodka, grew by about 50-60 times," says the director of alcohol market agency TSIFRRA, Vadim Drobiz. Today, one in 10 bottles of strong alcohol bought in Russia is of foreign origin.

In the coming years, foreign players will have further opportunities to promote their goods on the Russian market. The sharp hike in excise tax means that mid-range vodka will not be much cheaper than other strong alcoholic beverages. "In 2012-2014, the average annual rise in excise tax will be 30 percent, followed by 20 percent in 2015, which will put vodka in the same price category as many other alcoholic beverages," says Drobiz. As such, foreign players will have a golden opportunity to tweak the taste buds of Russian consumers.

Of course, not all analysts believe the task is feasible, citing the traditions and culture of vodka that stretch back several centuries. Furthermore, the emergence of new players in the spirits market may not be all smooth sailing. "The main issue here is bureaucracy. Plus, it must be clearly understood that this is an active market with strong local players, which is particularly relevant given the total ban on alcohol advertising," says Alexander Romanov, head of the Committee of Alcohol Producers, the main lobby group for foreign companies.

However, despite all the potential obstacles, the Russian market already boasts a real success story: in the last two years, Bacardi LLC has brought about a mini-revolution with its William Lawson's brand of whiskey, recognized by IWSR as the fastest growing spirit in the world in 2011.

Much of this growth came in Russia, where the inexpensive William Lawson's (around $16 per bottle) now holds the largest market share in the segment (15 percent). Inspired by this success, domestic producers have started thinking about their own brands of whiskey. For example, Synergy LLC, which produces the renowned vodka Beluga, is set to launch Fox & Dogs whiskey, which will focus on the mainstream consumer. "We realize that whiskey, cognac, and brandy are selling nicely in Russia and don't want to miss out. At the same time, it's a good hedge against the increase in excise tax on vodka," says company spokesperson Prokhor Malyutin.