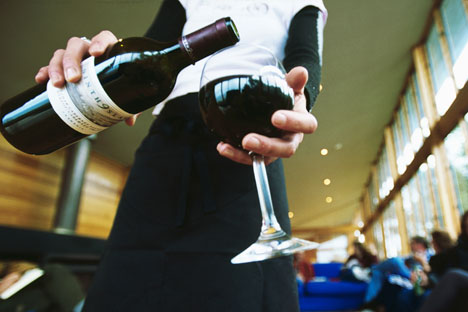 Australian wines are particularly suited to the Russian climate, but Russian wine drinkers know little about them because of very few promotional events.

In 2008, thanks to trade promotion organisation Wine Australia, I took my first trip to Australia’s wine regions – from Margaret River and Mount Barker, to the Barossa and Clare Valley, to the Hunter in New South Wales. At that time, Australian wines were in the spotlight in Russia, as were other New World wines. In this era before the global economic crisis, the market was booming – at least, in Russian terms, which meant a rising level of imports and consumption reaching 6 litres of wine per capita a year.

I came back from my trip inspired about the brilliant future of Australian wines in Russia – partially because of the interest in New World wines in general, but also because Australian wines are warm-climate wines, mostly reds, aromatic, dense, full-bodied and rich – perfectly suited for the colder Russian conditions.

But much has changed since 2008. The Russian wine market has suffered serious shrinkage and a consolidation of players, and as a result some smaller importers have disappeared. While today there are still Australian wines in the portfolios of major wine importers, the number of events aimed at promoting these wines and the flow of information from official bodies whose job it is to create awareness of the attributes of wines from around the world are miniscule. Wine Australia also went through a big management change and today the focus of its United Kingdom-based office is a long way from Russia.

As Aaron Brasher, Wine Australia's regional director for Australia and emerging markets, wrote in an email: “Wine Australia’s position in Russia is a passive one. We work with Austrade to identify any opportunities and resource accordingly. Russia currently is not a priority market and there are numerous barriers to entry. It is a market that we continually monitor to assess the environment”.

Fewer activities and less consumer education both mean smaller market share. Although Russian wine drinkers are open to trying new things, the knowledge of a general Russian consumer about Australian wines is limited to shiraz and possibly the Yellow Tail label, if they recall the name.

Olga Olefir, head of the corporate department of the MBG wine importer, described some of the challenges Australian imports face in Russia: “The Penfolds dinner with Russian clients gave us some interesting insights on the performance of top Australian wines. This flagship wine from Barossa is virtually unknown even among high-end wine consumers, let alone the ordinary public. Add a huge gap between low-level supermarket plonk and overpriced high-quality Australian reds which is not filled by moderately priced fine wines from stable producers and you will see the picture.”

With importers and big producers having to educate consumers at their own expense, Australian wines in Russia are being driven towards low-quality wine sales and a complete absence of high-end Australian wines such as Henschke, Charles Melton, Yalumba and Torbreck, especially in on-trade. Now, Argentina, France, Italy and Spain are capturing the minds of Russian consumers. Even Greece is putting on a significant number of events in Moscow.

Veronika Denisova, head of wine education in leading Moscow wine school Enotria, said: “Education is crucial for any country willing to be on this market. With a new emerging flock of younger bloggers and journalists, it’s easier to address the wider public than it has ever been."