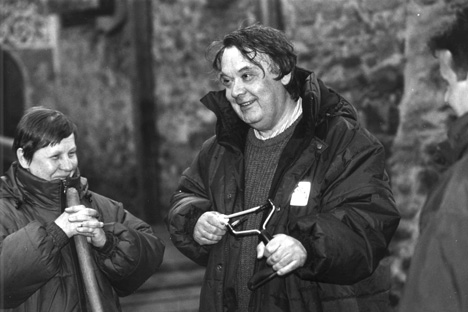 German began shooting his final film – and his life's work in 1999. German’s son, Alexei German, Jr. promissed that it will be completed in the nearest future. Source: Rossiyskaya Gazeta.

Director of Khrustalev, My Car! and My Friend, Ivan Lapshin passed away on Feb. 21 leaving his life's work, History of the Arkanar Massacre, unfinished. His funeral will be Feb. 24 in St. Petersburg.

Filmmaker Alexei German arguably suffered from censorship more than anyone else of his generation. His first film was supposed to have been a screen version of It’s Hard to Be a God, the 1964 science-fiction novel by Arkady and Boris Strugatsky, but filming was shut down by the censors.

His next attempt, Trial of the Road, was shot in 1971. It was promptly banned, and the finished film sat on the shelves for 15 years before being released in 1986. Trial of the Road, about a hero who flees captivity and joins the partisans and must earn their trust in blood, was the first POW movie in Soviet history. The movie was blamed for stripping the hero status from those who resist the enemy and the director was pilloried for not understanding the realities of guerrilla warfare.

In 2008, German spoke to Teatral magazine about some of the experiences that led to the film. “I got a genuine Hero of the Soviet Union, [Alexei] Nikiforov, as a consultant on the movie. He led the rearguard against the Nazi sympathizer Russian Liberation Army during World War II. He ran a kind of campaign among them that went ‘Come back to your own kind. You’ve got a chance to pay for your treachery in blood. The Soviet government promises you forgiveness.’

People believed him and came back to the Red Army. They fought loyally, and many of them made it to Berlin and got medals. But then they were arrested after the war. Nikiforov went to parley with [second secretary of the Soviet Communist Party Andrei] Zhdanov. A few minutes later, Nikiforov was arrested. They locked him up for 10 years in the same places where those who’d believed him were serving their time, too.”

German’s next picture, Twenty Days without War, finally made it to the screen. Famous clown Yuri Nikulin played the lead, although there was no comic aspect to the movie. The story was about a 20-day furlough earned by a war correspondent during the hostilities. But the film was not without critics; it was accused of “abstract humanism.”

German’s big break came with the film My Friend, Ivan Lapshin (1984), a story about the work of police detectives set in the 1930s. The movie won a slew of international awards, including the Bronze Leopard at the Locarno Film Festival and the FIPRESCI award.

Alexei German was awarded the Critic’s Prize at the Rotterdam Film Festival in 1987 for his work on Trial on the Road, Twenty Days without War and My Friend, Ivan Lapshin.

The director’s biggest success in the West came in 1998 with the film Khrustalev, My Car!, which is set towards the end of the Stalin era. Filming began during the final years of perestroika, when blowing the whistle on Stalinist crimes was commonplace. But it was still viewed as some kind of revelation when finished in the late 1990s. The film premiered at the Cannes Film Festival, but viewers walked out of the screening en masse.

Movie critic Andrei Plakhov wrote about it: “the film will take its rightful place in cinema canon as the most personal, and most bitter made by a major director.” The author Peter Weill said after watching it “was a rare brush with something that exceeds the scale of your expectations – not just in a movie, but in any sphere of art. It has an obsession that grasps its viewers. The dreamlike atmosphere of film, perhaps, has never been manifested with such a grim and graphic expression. You can lose yourself in Khrustalev without a trace.”

German began shooting his final film – and his life's work in 1999. Called History of the Arkanar Massacre, it was at long last the film version of It’s Hard to Be a God. In the novel, a being from the future is sent back to the Middle Ages of an obscure planet to humanize its people and lead them to a brighter future. German finished filming in 2007, but the meticulous director wrestled with editing the material until his death.

According to Olga Agrafenina, deputy director of LenFilm studios, History of the Arkanar Massacre will be completed and released after the director’s funeral. “All the creative work has already been done – the editing and dialogue – so in principle there are just a few technical jobs left, re-cutting the soundtrack and the final lab work. It’s hard to say when it will come out, but it will be completed without a doubt. We need to see who ends up finishing this project off,” Agrafenina said in an interview with RIA-Novosti.

German’s son, Alexei German, Jr., posted a blog contribution for Echo Moskvy radio station in which he wrote: “History of the Arkanar Massacre is practically finished. The soundtrack needs to be recut and that’s it – the rest is done. It will be completed in the nearest future. My dad made this film when he was already ill. He sacrificed his life for this movie. The shooting was a long and painful process, like any life’s work. No state funds went into this film.”