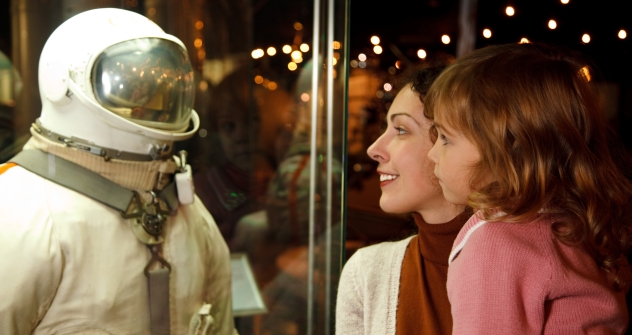 A young girl stares in wonder at a space suit at the Cosmonaut Museum. Source: Lori / Legion Media

A city built on an inhuman scale, with towering skyscrapers and gridlocked traffic, Moscow may not sound like a child-friendly destination. The first day in town with a stroller, for instance, can be a bewildering experience. How does one cross the 10-lane street to get to the cat theater on the other side? Over time, the city reveals itself. Expat parents and their children become intoxicated by the fairy-tale nature of the place, and enjoy the pleasures of outdoor ice skating on Red Square or watching Bolshoi matinees.  Observing trapeze artists swoop like birds through the world’s biggest big top is a great experience. Strolling through waterside Gorky Park or peering into the original Vostok craft that carried Yuri Gagarin into space, visitors might even start to think Moscow is perfect for children.

View the gallery: Where to entertain kids in Moscow

There is plenty here to amuse kids and new venues open all the time.  Thirteen-year-old New Yorker, Arden Dressner Levy, who lived in Moscow for four years, lists the circus among her Moscow highlights, along with “the ballet, ice skating, in Gorky Par and cross-country skiing, blinis and hot chocolate.

But it is the Russian circus that fuels the most magnificent daydreams. Moscow’s oldest circus is on Tsvetnoi Boulevard, just twenty minutes’ walk north of the Kremlin. Albert Salomonsky a bareback rider-turned-businessman, built it in 1880 and framed his first ever ruble of profit to put on the wall of the box office for luck. His catch phrase was “clowns are good; ticket sales are good.” The circus operated throughout the devastation of World War II. Clown Yuri Nikulin, Russia’s Buster Keaton, joined the circus immediately after the war and worked there for fifty years. Since Yuri’s death in 1997, his son Maxim has run the show, now known as the “Nikulin circus.”

The years of the clown

Yuri Nikulin was by far the best circus clown in Moscow, but he was much more. For Russians, he was Buster Keaton, Mickey Rooney, and Jim Carrey, all rolled into one, and his career spanned the entire second half of the 20th century. He started performing in 1944 while still on active duty in World War II. Nikulin subsequently acted in dozens of movies while carrying the city’s most illustrious circus on his shoulders. His partnership with director Leonid Gaidai is among the most significant in the history of Russian film.

A statue of Yuri Nikulin getting into his car stands on the pavement outside and several bronze clowns unicycle around a fountain across the leafy boulevard. The   show promises bears, monkeys, dancing poodles and aerial gymnasts, the “White Birds.” Last year’s spectacle included snakes and crocodiles, horseback dancers and acrobats, along with the perennial clowns.

The newer “Bolshoi (Great) Circus,” near the Moscow State University, also continues to attract huge audiences with its mixture of animal acts and human skill. The 1971 building, the largest permanent circus in the world, is high enough to accommodate flying trapezes and wide enough to host parading elephants. Dressner Levy said her favorite act is “when they fill the pool at the Bolshoi Moskovsky circus and do water ballet.” Below the 118-foot high big top are subterranean levels plunging half as deep again, containing six interchangeable arenas, suitable for horse-riding, optical illusions, ice skating, electronic lighting spectacles and even aquatic shows with marine animals and water ballet. 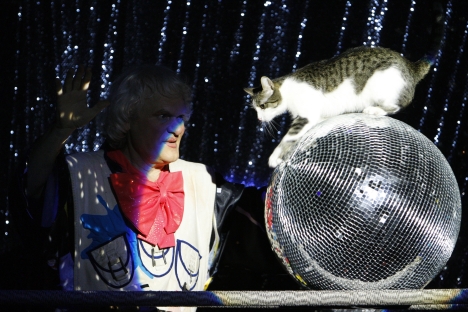 Moscow has several internationally acclaimed and deeply quirky animal theaters, including one where all the performers are cats, or the Durov Animal Theater, with its “mouse railway,” founded a century ago in 1912 by clown and animal trainer Vladimir Durov. Children of all ages are riveted by the parade of mice on the miniature train set.

The city is full of entertainments designed to brighten the long Muscovite winters. The puppet shows at the Obratsov theater are famous for their elaborate costumes and the Bolshoi ballet’s annual “Nutcracker” sells out every Christmas. “The Adventures of Red Riding Hood,” the Mayakovsky Theater’s lively composite fairy tale, is all in Russian, but from the minute Red Riding Hood enters with her roller blades and mobile phone, you know this fractured fairy tale is going to be fun. The more familiar stories keep the show accessible while introducing less well-known figures, like the witch Baba Yaga with her roving “hut on chicken legs.” Older kids might check out the rollicking version of “Jesus Christ Superstar” at the Mossoviet Theater.

Children with particular passions, like dinosaurs or space, will find world-class, relevant museums in Moscow. The Central Museum of the Armed Forces allows kids to climb all over the tanks and rocket launchers in the garden. Some of the more impressive elements of the Moscow’s biggest attractions, like the Egyptian gallery in the Pushkin Arts’ Museum or the coaches in the Kremlin’s Armory can appeal to kids too, but sometimes what you need is a tiny bite-sized museum like the Museum of Valenki (Russian felt boots) near Paveletskaya railway station. It’s only one room, but the guide speaks English and you can see the huge woolly shape that boils down into durable footwear before trying on sauna hats in the factory shop next door.

The Victor Vasnetsov House-Museum is an extraordinary cottage hidden among tower blocks, with tiled stoves, intricately carved furniture and an attic-studio full of giant fairy-tale canvases on which Vasnetsov re-imagined the myths and folklore of medieval Russia. Some kids are more excited by the iconoclastic Mayakovsky museum, where collages of broken, melted or resized objects form a revolutionary exhibition. Factory-conversions, like the twenty-odd galleries at Vinzavod with its brightly colored graffiti and conceptual art, or the Burganov sculpture museum boasting overhead walkways and a courtyard full of giant, disembodied limbs, are also top choices.

{***A new and improved Gorky Park, spacamen and The Simpsons***}

A new and improved Gorky Park, spacemen and The Simpsons 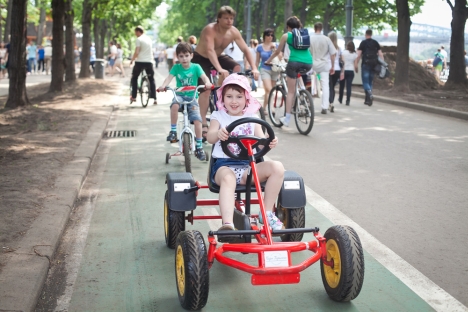 The Gorky  park has a lot of facilities for kids. Source: Gorky Park / Press Photo

Just over a year ago, oligarch Roman Abramovich bought up the dilapidated funfairs of Moscow’s Gorky Park and transformed them into a utopian expanse of beanbags and juice bars, deck chairs, outdoor art and yoga classes. The whole park now has free entry and Wi-fi. The setting for Martin Cruz Smith’s gruesome novel disappoints cold-war connoisseurs, but delights kids. Instead of frozen bodies, it has traditionally been full of decommissioned space shuttles and rickety roller coasters. This past summer it had become a really great place for riverside relaxation. Recent additions to this burgeoning paradise include a mini-zoo, summer cinema and a café with a swimming pool. In winter, the paths are flooded to create miles of skate-able ice.

The All-Russia Exhibition Center, known as VDNKh, was a 1930s agricultural show, full of golden fountains and ornate pavilions. The surviving architectural wonderland has its own circus, fairgrounds and seasonal ice rink. It is also the home of the Cosmonautics and Ice Age museums, the monorail, a butterfly house, and kiosks full of lava lamps and energy balls.

Another great afternoon trip with kids is to the Izmailovo Souvenir Market: a fantasy palace in a crazy labyrinth of stalls, kebabs in a wooden café, pirated DVDs of the latest Hollywood movies and nesting matryoshka dolls of characters from the TV show “The Simpsons,” and the character Pokemon. Go one stop further on the metro and you can step off straight into acres of woodland; this is Izmailovsky Park, former royal hunting grounds, now a huge forest full of ponds and playgrounds. There are adventures for all ages, wherever you wander in Moscow.