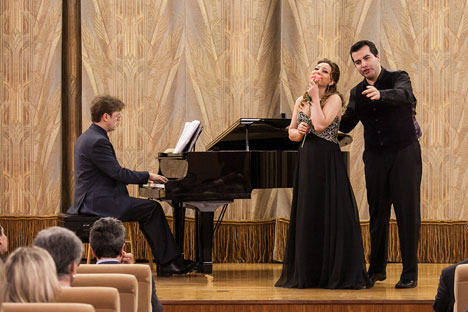 The Washington National Opera and the Bolshoi Theatre enter the third year of an artist exchange program.

When tenor Sergei Radchenko came to Washington, D.C., in mid-March for an exchange program, he wasn’t too sure what to expect. After all, the Bolshoi Theatre’s young artist exchange with the Washington National Opera Domingo-Cafritz program is only two weeks’ long. What can be learned in that time? Yet Radchenko said he found the experience “essential” to his growth as an artist.

“To be honest, being exposed to an American organization is essential for us,” Radchenko said at a sumptuous buffet dinner after a performance at the Russian Embassy in Washington, a finale for the Russian artists in the exchange.

“It helped my self-esteem. It also influenced how I sing and behave on stage. I noticed with Americans, they are relaxed and calm before they go on stage. There is some kind of American mentality that they work with pleasure.”

The tenor said that the atmosphere in Washington helped him to enjoy his singing, and relax a little. That was a welcome asset when he auditioned for the Metropolitan Opera in New York in the last week of March. (At press time, Radchenko was still waiting to hear whether he might earn a place at the Met.)

The Bolshoi artists received housing from the Embassy of the Russian Federation and on the night of the performance there was only acclaim at the embassy. The exchange between WNO and the Bolshoi was initially developed and continues to be sponsored by WNO board member Susan Carmel Lehrman.

An American opera buff approached Radchenko at the dinner: “I said to myself, a Russian isn’t going to do Hercules!” the audience member said, referring to Radchenko’s show-stopping performance of “Let Fame Not the Tidings Spread” from Handel’s “Hercules.”

In its third year, the young artist exchange program between the Bolshoi Theatre and the Washington National Opera (WNO) creates a common international stage for artists. In conversations with opera singers from Russia, Armenia, Uruguay and the United States, it became clear that the Bolshoi and WNO programs are quite distinct, yet complement rather than contradict each other’s educational values.

In 2012, four Domingo Cafritz Young artists from WNO—soprano María Antúnez, basses Soloman Howard and Kenneth Kellogg, and pianist Rafael Andrade—travelled to Moscow for 14 days. During that time, they studied with Katya Vasheruk from the Bolshoi and Elena Gaudasinskaya from the St. Petersburg Conservatory, as well as with vocal teacher Svetlana Nesterenko.

In 2011, pianist Artem Grishaev visited Washington as part of the exchange program; he auditioned for Plácido Domingo and was offered a spot in the Domingo-Cafritz WNO Young Artists program after he completed the Bolshoi. Grishaev will soon finish his second season in Washington.

Soloman Howard, 32, is a talented bass with WNO’s program; he was raised in Washington, D.C. and went to high school in Fairfax, Va. before attending the Manhattan School of Music. At the April 1 performance at the Russian Embassy, he performed Gremin’s aria from the opera “Eugene Onegin” and was joyfully received by the audience, which was mostly Russian.

“My native tongue is English,” said Howard. “I can’t be fearful, overanalyze or overthink [singing in Russian]. I worked really hard to appreciate it. I started the [Eugene Onegin] aria three weeks prior to going to Moscow. Once I got there, I spent those two weeks learning it.”

Howard was selected to participate in the exchange program last June, when he spent two formative weeks with the Bolshoi Theatre. “The biggest difference for us was that the program was tailored around specific needs,” the opera singer said.

Studying in Russa and U.S.: Boot Camp or the Comfort Zone?

“When we first got there, they assessed what we needed and what we wanted to accomplish while we were there. They came up with a workout regimen: Some of us wanted more movement, while some of us needed acting. They made sure we could gain the maximum amount of knowledge in our time there.”

Howard said that another difference was that the Bolshoi had full-time acting and voice teachers, available “seven days a week.” At that time, the WNO did not have a voice teacher on a regular basis (though it does now).

Among the performers was María Antúnez, who emigrated to the United States from Uruguay ten years ago. At the embassy, she performed Tatyana’s Letter scene from “Eugene Onegin.” Later, by phone, she said that her two weeks in Moscow last summer was something of a revelation.

“In general I saw great respect and worship of the arts in Moscow,” Antunez said. “Their real heroes are the poets, the musicians and the actors…and it was very important to me. It’s part of the culture there to take singers more seriously than in other places.”

Reflecting on the differences between Russian and American teaching styles, Antúnez said, “I have more in common with Russian singers. They say whatever they are thinking. It’s a different way of communicating and I appreciate them being straight and getting things done. I can also appreciate the nice American way; it’s just different. I can adjust and relate to either one.”