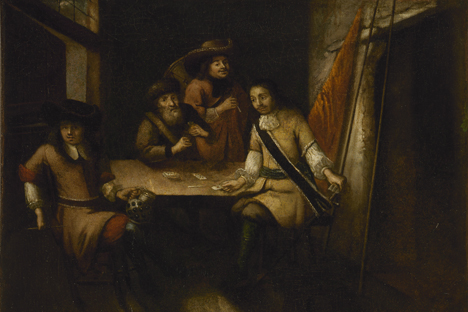 A painting drawn by unknown Dutch artist depicts Peter the Great during his negotiations in the Netherlands in 1697-98. Source: State Hermitage Museum, St. Petersburg

A new exhibit at the Hermitage Amsterdam on the Russian tsar who visited the Dutch capital kicks off the Russia-Netherlands Bilateral Year.

On his recent visit to Amsterdam to launch the Russia-Netherlands Bilateral Year, Russian President Vladimir Putin accompanied Queen Beatrix of the Netherlands to the exhibit “Peter the Great: An Inspired Tsar” at the Hermitage Amsterdam, a branch of Russia’s Hermitage Museum.

The exhibit attempts to present a more human side of Peter, who has attained a kind of mythical status both in Europe and Russia.

Each of the exhibit’s rooms presents a particular facet of Peter’s personality – academic, hero, sailor, carpenter – and features articles owned by emperor himself, including his saw and his chisel; his medicine chest and his surgical instruments; his navigational equipment and his lathe together with items he made with it.

One room contains the sailor’s uniform that Peter wore in Holland, and another has his dressing gown made from Japanese silk. Many of these items are on display for the first time in many years.

The curators have also attempted to reconstruct some of Peter’s items. For example, a Renaissance goblet studded with antique gems that belonged to Peter was turned into scrap during the reign of Catherine II (the Great) and its gems remade into a ring. But the exhibition has made a painstaking effort to recreate this item in its original form by referring to surviving engravings.

This goblet is in a way a metaphor for the whole exhibition: an attempt to create a portrait of an outstanding personality from some odd antiques. The resulting portrait may not be exhaustive, but it is colorful. The very fact that many of Peter’s personal effects still exist says something about the cult of his personality in the 18th and 19th centuries.

The exhibit shows ‘Herr Peter’, the great and mysterious tsar who was celebrated by the European Enlightenment and who busied himself running about the shipyard with carpenter’s tools in his hands and a pipe between his teeth.

For many decades, a sentimental and overly positive image of Peter as the tsar with calloused hands was dominant in Europe. It was important both for popular culture, including the work of Voltaire and the operas of Andre Gretry (Pierre le Grand) and Albert Lortzing (Zar und Zimmermann“Tsar and Carpenter”).

In Russia, the most sincere homage to Peter’s deeds is often expressed not so much through sentimentalism as through a vague fear.

Pushkin’s poem TheBronze Horseman is an example of this as well as a well-known anecdote from the time of Catherine the Great.

In 1770, during a service at the Peter and Paul Cathedral on the occasion of the Russian navy’s victory in the Battle of Chesma, Metropolitan Platon (Levshin) approached Peter’s tomb with the rhetorical exclamation, “Arise, now, O great tsar, and gaze upon your favorite creation!” On hearing this, the Cossack hetman Kirill Razumovsky blurted out as if for everyone to hear, “Why’s he shouting? He’s a fool. If Peter does arise we’ll all be in trouble.”

Some of the last rooms are devoted to Peter the collector, and this image of the great tsar, is clearly intended to show the emperor among the enlightened monarchs of those days.

Among the works of art acquired by the tsar are the marble Venus Tauride and Rembrandt’s David and Jonathan, while Peter’s scientific interests are illustrated by his collection of babies preserved in alcohol by, which have been loaned by the St Petersburg Kunstkamera.

The exhibit also features gold items from the “Golden Storeroom” with the note that Peter was given the idea of collecting them by Nicolaes Witsen, the burgomeister of Amsterdam.

A skilled commander and diplomat, Peter I managed to carry out some of the most radical reforms in Russian history. Through his labor, the country became one of the most influential powers in the world. Up until the revolution of 1917, the political structure of the Russian Empire was largely the legacy of Peter I.

One of the most significant moments for the first Russian emperor was his trip abroad — the so-called "Grand Embassy" (1697 - 1698), which included more than 200 people. Peter I himself traveled incognito on this 18-month journey. The delegation visited Riga, Königsberg, Leipzig, Dresden, Holland, England and Austria.