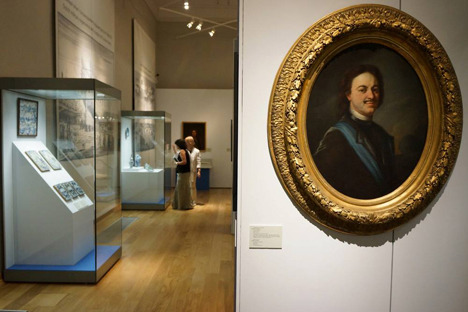 Exhibition “Russia and The Netherlands: Interaction Space”, opened at the State Historical Museum, brings visitors into an 18th-century atmosphere: old naval maps, models of ships and Russian and Dutch flags in the same red-white-and-blue colors.

The Russia-Netherlands exhibition at the State Historical Museum plunges its visitors into an 18th-century atmosphere: old music, models of ships and men-of-war, and Russian and Dutch banners in the same red-white-and-blue colors.

The Russia-Netherlands ship enshrines all the relics of 300 years of close ties, which were only severed once before the 20th century – on account of Napoleon.

Peter the Great was a new-age ruler for Russia. His first visit as czar, which was dubbed the “Grand Embassy,” was paid to The Netherlands in 1697 – the first one in so many respects.

He admired the country so much that Russia actually remained guided and inspired by its example for decades afterward.

The main mission of the Grand Embassy was to get to the bottom of the shipbuilding secrets and experience of the Dutch seafaring nation.

Peter was the first to become a student of the Dutch masters and built the first ships himself. The czar's first handmade piece – the little boat Fortuna – is still on display in a museum in the ancient town of Pereslavl-Zalessky.

The exhibition's first hall features souvenirs from the Grand Embassy: Peter's waistcoat made of Dutch fabric, his portrait by Dutch painter Godfried Schalken, parts of the ships that were in his first fleet and pictures capturing the triumphant arrival.

Inspired by what he had seen on his journey, the czar was almost obsessed with the Dutch ways. Peter decreed that all young men not yet enrolled in any service were to go to Holland to learn the German and Dutch languages and, in particular, to study shipbuilding.

Simultaneously, the Dutch, who enjoyed the czar’s special favor, flocked to Russia and were showered with privileges. They helped chart the first naval maps (the exhibition actually features one such map of the Sea of Azov). It also prominently features the first reference to Peter as “emperor.”

Another symbolic exhibit on display is a map of ancient Amsterdam – the city in whose image and likeness the new Russian capital of St. Petersburg was built.

One whole stand at the exhibition illustrates the life of Nicholas Bidloo – a Dutch doctor and anatomist who moved to Moscow. He made history in Russian medicine by bringing it to a whole new level and founding the first hospital in Moscow.

The hospital, which has a medical school attached to it, is now named after Burdenko and is one of the city's best medical institutions.

Thus, The Netherlands actually had an influence over a vast range of areas of life and science – from urban planning and shipbuilding, to cartography and medicine, even to the fine arts and, finally, everyday life.

An etching made by the emperor under the supervision of the Dutch master Adrian Schonebeck might surprise the less-prepared. It features a subject popular at the time: the triumph of Christianity over Islam.

Even the trade in folk art felt the Dutch impact. Gzhel ceramics and majolica – two crafts thought to be original Russian folk arts – are actually a fraud, as is confirmed by painted vases and plates featured at the exhibition.

In addition to everything else, Dutch ovens patterned with Dutch ceramic tiles were a symbol of luxury in Russian manors. The ceramics were later painted in a Russian style, with typical story lines and patterns.

The love of anything Dutch is manifest in one of Russia's most refined country estates – Kuskovo, the Moscow estate of Count Sheremetev. The Dutch House that is part of the ensemble prominently features all the typical elements of the Dutch tradition.

In addition, there is a hall dedicated to what Russia looked like in the eyes of the Dutch travelers. Their stories were the only source of information about a country deemed remote and barbaric by the rest of Europe.

Travelers used to bring shaman's costumes and various other artifacts from Siberia, for example.

Two engraved books from the time are even available in digital format: “A Journey across Moscovia to Persia and India” by Cornelis de Bruijn, and “Three unforgettable journeys through Italy, Greece, Livonia, Moscovia and other countries” by Jan Jansen Struys.

The latter is more important, owing to its influence even on contemporary ethnographers and historians.

Many Dutchmen who came to Russia back then remained in the country and were granted citizenship. For instance, Franz Devollant built 12 ports and cities across Russia and founded Odessa on the orders of Catherine II.

In 1813, Russians helped the Dutch win their independence from Napoleon, and the two nations later reaffirmed their union with the marriage of the Prince of Orange and Anna Pavlovna (sister of the two Russian emperors Alexander I and Nikolai I).

The exhibition at the Historical Museum has already brought together over 4,000 exhibits from 14 Russian museums and 13 Dutch collections, including the Rijksmuseum in Amsterdam, the Maritime Museum of Rotterdam, the Central Museum of Utrecht and others.

“The exposition's main idea is to reveal the deep historical relations between the countries and tell the public about the times when Holland used to be Russia's major trading partner and investor,” supervisor of the exhibition, Vladimir Bulatov, told the Culture TV channel.