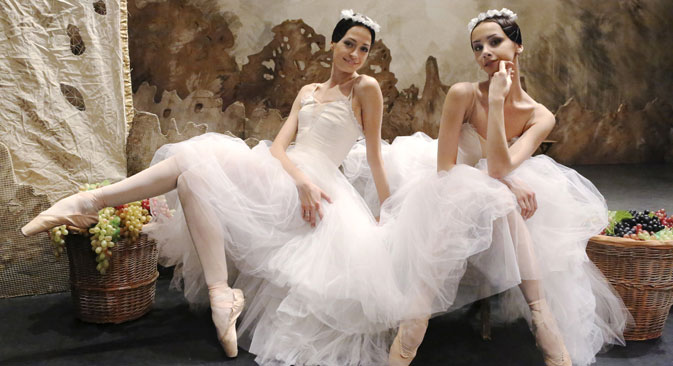 In 1917, a British diplomat’s 13-year-old son was so taken by Anna Pavlova’s dancing that he decided to become a ballet dancer himself. Against his family’s wishes, he gave up a City career to enrol in one of the numerous ballet schools. Source: Getty Images / Photobank

As the UK-Russia Year of Culture begins, RBTH looks at the lasting legacy of Russian ballet in Britain.

The biggest cultural celebration ever staged by Britain and Russia together was launched this week. Carefully selected and thoroughly planned, the UK-Russia Year of Culture 2014 is hoped to have an impact that will last for years and generate a positive mood in the two countries’ political and economic relationships. Hundreds of events will be organised in both countries during 2014, covering everything from classic literature to modern art, fine china to film, and fashion to space travel.

Arguably, though it is Russian ballet that most captures the British imagination, and the Year of Culture promises to rekindle the British love affair with this most Russian of all art forms. The exciting programme includes several exciting productions that will add to the rich history of dance diplomacy between the two countries. Ballet’s leading characters, the larger-than-life aristocrats of dance, have fascinated fans in Britain and Russia almost to the same degree as members of a real-life royal family.

IN PICTURES: Serge Diaghilev: the Tarantino of Ballet in his times

Britain’s first exposure to Russian ballet was in the form of Sergei Diaghilev’s Ballets Russes shortly before the First World War. Emotional and fresh in its approach, the itinerant company took London's cultural life by storm. Britons would adopt the dancers’ costumes and manners; all things “extravagantly Russian” became modish and spread from high society to all the other classes.

In 1917, a British diplomat’s 13-year-old son was so taken by Anna Pavlova’s dancing that he decided to become a ballet dancer himself. Against his family’s wishes, he gave up a City career to enrol in one of the numerous ballet schools that had sprouted up in London to cater to the universal Russian Ballet craze. Thus started the career of renowned British ballet choreographer Frederick Ashton. The Royal Ballet founder, Irish-born Ninette de Valois  and Alicia Markova, who co-founded the English National Ballet, both began their careers dancing in the Ballets Russes. They later modelled their respective companies on that of Diaghilev.

Tamara Karsavina, the sister of philosopher Lev Karsavin and a star of the Ballets Russes, did a lot to establish ballet as an art. After marrying British diplomat Henry Bruce in St Petersburg, she moved to London with her husband in 1918 and spent the rest of her life there. Karsavina strengthened ballet’s reputation in the eyes of the public. High society adored her: she was the smartest of all the Russian ballerinas of the time.

Soviet ballet dissidents merit special mention. Rudolf Nureyev defected in Paris during the Kirov Ballet’s European tour, but he found real fame at Covent Garden and created a romantic myth through his partnership with ballerina Margot Fonteyn – they were the perfect ballet couple of the second half of the 20th century. Nearly a decade later, Kirov’s prima ballerina Natalia Makarova followed Nureyev’s example and applied for asylum in London. Makarova, too, became a star at Covent Garden.

In the mid-20th century, Russian ballet broke right through the iron curtain, reviving the western public’s interest in the art. British choreographers Frederick Ashton and Kenneth MacMillan were impressed with the Soviet dramatic ballet school and, eventually, the Russian ballet tradition blended with the strong British theatrical tradition.

Russia is not only exporting its ballet these days, the reverse is also true: the Russian public warmly welcomes companies such as the Royal Ballet and Sadler’s Wells. There is an appreciative audience for the intellectual Wayne McGregor with his Random Dance company (who was invited to work with the Bolshoi) and for the popular Matthew Bourne with his New Adventures company (who caused a Russian sensation in 2007 with his touring all-male version of Swan Lake).

The latest development in the history of Russian-British ballet relations is that Russian dancers (beginning with members of the famed Messerer and Plisetsky theatrical dynasties) are now being invited to teach at British ballet companies. Globalisation may have done away with state borders, but the Russian dance school still remains unique, and Russian mentors are highly valued in the West – perhaps even more so than they are back home.

The Royal Ballet last year signed a contract with the talented young Russian prima ballerina Natalia Osipova. Professional, vital and very emotional, Osipova charmed the world. She feels at home in London and “very happy to be working at Covent Garden". But dancer Sergei Polunin, who was recognised by British critics as the most promising young ballet star, did not stay long at Covent Garden. He does not perform in London often, but one such occasion is coming up.

Three of the best

The UK-Russia Year of Culture 2014 includes three major ballet events. First, on March 9, the London Coliseum will stage the Russian Ballet Icons Gala, which celebrates the rich history of Russian ballet. The gala will feature significant excerpts from the Russian classical repertoire and will be complemented by several contemporary masterpieces by choreographers such as Kenneth MacMillan and Alexei Ratmansky.

Part of a project that has run since 2006 dedicated to iconic Russian dancers, the programme will be performed by leading dancers from companies including the Bolshoi, Mariinsky, Royal Ballet and English National Ballet.

In addition, on March 30, the Bolshoi will present The Golden Age with music by Dmitri Shostakovich at the Barbican. This delightful ballet will offer jazz and cabaret musical scenes, an extraordinary corps de ballet and, of course, the world-renowned Bolshoi principal dancers.

From April 15-17 at the London Coliseum, the Eifman Ballet will present two shows by its acclaimed choreographer Boris Eifman. The shows will be the British premiere of Rodin, which has received good international reviews, and Leo Tolstoy’s Anna Karenina, which was first performed in the UK two years ago.

“The British choreographer most important to me is Kenneth MacMillan, who combined the art of ballet and the very strong British culture of dramatic theatre,” says Eifman. “This artistic unity of dance and dramaturgy, of plastics and literature, is very important to me.”