Cherry-Picking the Best of Russian Culture 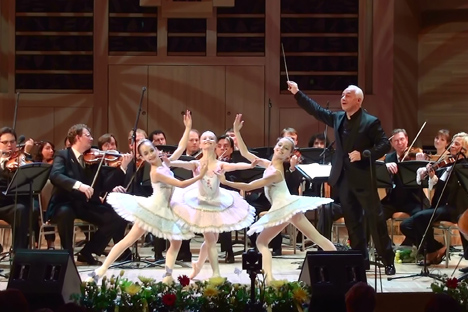 Some of Russia’s top classical musicians and dramatists will appear in the United States this spring through a festival organized by Russian emigre.

In May and June this year, a hefty line-up of Russia’s finest artists will come to the east coast for the Cherry Orchard Festival, a culture feast driven by two women passionately dedicated to bringing “the best of the best, crème de la crème” of art to New York.

Maria Shclover and Irina Shabshis were both born in Russia, went to music schools in Moscow, emmigrated to New York and studied business there. Their similar backgrounds and values led them to create the festival, which they hope will grow to encompass the whole of the U.S. and become a major center of cultural exchange. While they maintain that they see their festival as “a place to showcase the world’s best classical arts” and the inaugural festival last year had a diverse program including John Malkovich in “The Giacomo Variations,” the Gesher Theater from Israel and Russian pianist Olga Kern, the program of this year’s festival leans heavily toward Russia.

“Actually, we’re very glad we are focusing on Russia this time, especially in light of the political situation,” Shabshis, the festival’s artistic director said. She hopes that bringing top-tier Russian artists to the United States will help remind people that countries should be connected by culture. “Art does not have any political angles to it, we believe. By bringing Russian culture to the U.S., we can show that we don’t want any confrontations; we don’t want any wars; we want culture and peace. When you go to the theater and see a great performance, you won’t want to think about anything other than beauty and talent.”

This year, the festival brings a choice selection of Russian classical music and dramatic theater. On May 14, renowned conductor and violinist Vladimir Spivakov brings several young people from his own foundation, the Vladimir Spivakov International Charity Foundation. Fourteen-year-old Vladislav Kern, who will play Liszt, has been a recipient of scholarships by Spivakov’s foundation for eight years now. Discovered by the foundation when he was performing in a concert in Moscow, Kern says the foundation gives talented youths the priceless experience of meeting famous musicians and performing in major halls around the world. He began his studies at the Central Music School in Moscow and is currently a student at the Juilliard School in New York. He has been a recipient of a scholarship from the Spivakov foundation for many years and has also twice received a scholarship from the legendary pianist Van Cliburn.

Vladislav is the son of Olga Kern, who performs with Spivakov, baritone Dmitri Hvorostovsky and the Moscow Virtuosi Chamber Orchestra at Lincoln Center on May 18. “Music is healing; music is the world’s most renowned language and music doesn’t have any borders,” said Olga Kern.

Established in 1994, Spivakov’s foundation has been gifting instruments, providing scholarships and, no less important, giving young musicians valuable international exposure for two decades. Its recipients include Yulianna Avdeeva, who in 2010 won the revered Chopin International Piano Competition — the first woman to win it since the legendary Martha Argerich in 1965. Avdeeva calls Spivakov a “center of gravity for the leading representatives of Russian culture.”

From music to drama

The Cherry Orchard Festival, whose mission includes bringing “the newest and most daring” works that have never been presented in the U.S. before, also presents the Vakhtangov Theater from Moscow in New York (May 29–June 1) and Boston (June 6– 7.) “Eugene Onegin” was an obvious choice for the organizers. Since it premiered in Moscow over a year ago, it has won multiple awards and successfully toured Lithuania and France. The theater and its actors are some of the most venerated in Russia.

The production of Eugene Onegin by the Vakhtangov State Academic Theater has received many accolades Source: YouTube

The Vakhtangov theater, named after the Russian actor and director Evgeny Vakhtangov (1883–1922) began as a group of students getting together in 1913 to experiment with Stanislavsky’s “method” system. When their first play flopped, Vakhtangov was reprimanded by his employer, the Moscow Art Theater. The group went underground, but hard work in the next years won the studio recognition.

After World War II, the theater struggled in the Siberian city of Omsk, where it had been relocated. Eventually brought back to Moscow, it became an official theater and staged plays deemed appropriate by the Soviet state. After the demise of the Soviet Union, the theater turned into a dramatic institution worthy of export. It began touring abroad, investing in subtitles.

Tour producer Elena Geraseva said they chose “Eugene Onegin” for the U.S. tour because it combines all that is great in Russian culture. “With immortal text by Russia’s most beloved writer, Alexander Pushkin, stage directing by the artistic director of the theater, Rimas Tuminas, and a stellar cast, it is one of the best productions in Russia,” Geraseva said.

Featuring music by Tchaikovsky and Shostakovich, along with Russian and French folk songs, this production of “Onegin” is a daring display of theater.

The Cherry Orchard Festival wraps up with piano recitals (June 14 in Cambridge, June 17 in Maryland) by Russian pianist Denis Matsuev, who recently performed in the closing ceremony of the Sochi Olympics.

Send us an email telling us what you like best about RBTH and have your name entered in a drawing to win two tickets to a Cherry Orchard Festival performance. Write to US@rbth.ru by April 15 to be eligible for the drawing.