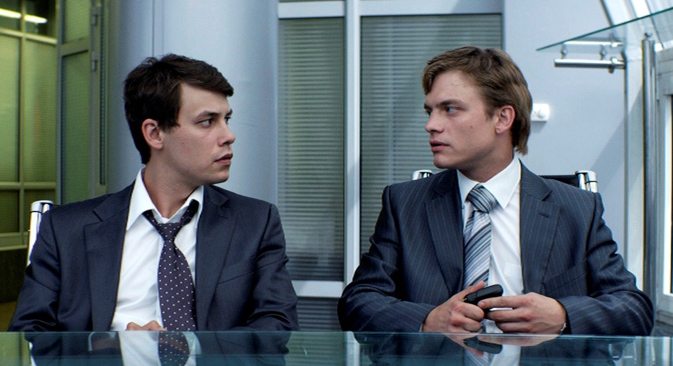 The film plunges into the atmosphere of the 1990s, the time when Russian private enterprise was being established. Source: Kinopoisk.ru

Movie theaters around Russia have begun screening new film “Startup”. Russia’s answer to U.S. box-office hit “The Social Network”, the movie tells the story of a pair of Moscow students in the mid-90s who create an internet search engine that becomes one of the largest in the world.

Startup is the first Russian film about a technology business and inspiration by the leading entrepreneurs of the Russian IT industry: the founders of ABBYY, Kaspersky, Yandex, and Apps4all.

“When conceptualizing Startup, we had the Yandex story at the forefront of our minds. It is the most illustrative and obvious example of how a domestic company that started from scratch turned into a global corporation,” says the film’s producer Irina Smolko. “Thanks to the IPO which Yandex did several years ago, it became well known not only in Russia but also abroad.”

“As soon as it became clear that we had something to make a film about, the question arose of whether it would just be a history of Yandex or a feature film dedicated to the Russian IT industry as a whole. In the end we went with the second option,” says Smolko.

The film plunges into the atmosphere of the 1990s, the time when Russian private enterprise was being established. Two friends, the talented student mathematician Boris and the enterprising and sociable Vsevolod, create the IT project from nothing. Fame, money, and the other attributes of success come later. But at the beginning, the heroes face a multitude of problems, perhaps the most universal of which is the lack of time to spend with loved ones, as depicted in American films The Social Network and Jobs, which tackled similar subjects.

The plot here is simply a device for a discussion about the difficulties and opportunities of an IT business in Russia. The director and producer of the film carried out serious research, recording dozens of interviews with leading entrepreneurs in the Russian IT industry. Startup is in this way part documentary history and part tutorial on how to set up a startup in Russia.

The story of the formation of the search engine Holmes (as it is called in the film), which the main heroes are developing, is a set of stages paradigmatic in the establishment of any given startup. Is money needed for new equipment? We see the main characters being interviewed by investors. Are there problems with revenues? One evening the head of the search engine ends up alone with his co-worker who is finishing her degree in contextual advertising – and this changes everything. Family difficulties and disputes between companions over money? Oh well, these things happen and we move on. Overcoming all difficulties, the company successfully makes it to an IPO.

Interestingly, the film also exists in “textbook” format, with the plot adapted for the educational process and a teenage audience. In the opinion of the experts of the Moscow Center for Innovative Development, Startup is the perfect methodological material for popularizing the movement of startups and young entrepreneurs.

The foreign audience will also have the opportunity to learn about creating “creating a startup Russian-style.” According to unconfirmed reports, Michael Barker, the founder of Sony Pictures Classics, will promote the film in the U.S.