New museum is a sweet trip into history for chocoholics 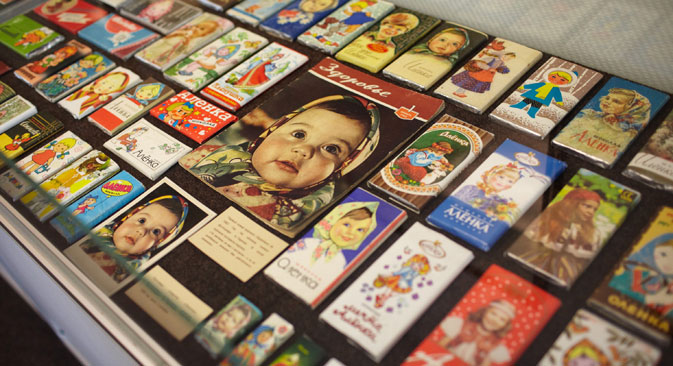 The Museum of the History of Russian Chocolate, which recently opened in the center of Moscow after several years as an exhibition in another museum, is a fascinating journey into the origins of Russia’s obsession with the black stuff. Here you can discover how Russian chocolatiers invented the precursor to the Kinder Surprise and other marketing gimmicks.

The newly-opened Museum of the History of Russian Chocolate occupies three floors in the center of Moscow. The first floor features exhibits of rare items – medieval Indian devices for making liquid chocolate and the first European instruments. Meanwhile, the second and third floors are dedicated to exhibits about the history of Russian chocolate-making.

The chocolate museum had its beginnings in the personal collection of Yevgeny Trostentsov. His collection had been on display in in the Museum of Contemporary Russian History for three years until, finally, in January of this year, it was moved to a new building.

Upon entering the museum, you feel as if you are dissolving into the past, into the time when 19th-century confectioners were competing for the right to be the supplier of sweets to the court of the Russian tsar.

It was at the Exposition de Paris in 1900 that Russian confectioners won international recognition. The world’s fair was the largest world exhibition in human history, attracting almost 50 million visitors in the seven months of its operation. Humanity bid adieu to the 19th century and joyfully acquainted itself with the achievements of civilization with which they were preparing to enter the 20th.

“At that time two confectionery houses went to the exposition from Russia: Einem and George Borman,” tour guide Elena Pegai told us.

“This was a triumph for the Russian chocolatiers. Einem received two awards, one for tea biscuits and one for its varied assortment. George Borman was awarded the prize for milk chocolate.”

These two confectioners largely determined the trends for the new century, being the first to implement marketing developments that are still used to this day all over the world.

The Einem partnership packed its confectionery in lovely boxes. Of course, this raised the price, but also made for more valuable gift sets. The boxes were vividly decorated on the outside and decorated with velvet and leather on the inside - these were works of art.

After the confections were all eaten, the mistresses used the elegant Einem boxes for decades as cases for the storage of papers. This had a surprising marketing effect.

“When the owner constantly had before her eyes the name of the brand,” Pegai said, “written on one of her loveliest accessories, this meant that she would only purchase products from this brand!”

Just behind the packages sit the music boxes, kept under glass. In Moscow, factories produced chocolate assortments and nested them in these luxurious boxes. Such sets cost a pretty penny, from 120 to 200 rubles ($3.5 to $7), which in those times was the average salary of a worker for six months.

The inspiration for the Kinder Surprise

Children, as everyone knows, love chewing gum not only for its taste, but also because it often comes with inserts depicting dinosaurs or cars in the lining, presenting a clear challenge to collect all of them. This clever marketing ploy increases sales volume.

As far back as the 19th century, the George Borman Company came up with the idea of selling sweets in spice jars with the words “flour,” “sugar,” “vanilla,” “cinnamon,” and so on. Housewives would race each other around town trying to assemble the full collection.

“First, they were the first in the world to start selling chocolate Easter eggs with crosses or lovely chocolate figures inside them. This was the prototype of the modern Kinder Surprise. The idea should have been obvious, seeing as it was… the Russian matryoshka. But before the Borman family, no one had thought of it.”

The Bormans were also the first to set up a machine that automatically dispensed chocolate bars. They sold them for 15 kopeks. It was only 15 years later that Americans started to produce similar inventions for vending chewing gum.

In 1920, a new era in the production of chocolate began. At first, Soviet factories printed wrappers with portraits of leaders, but then the people started to crack jokes like, “they’re tossing Lenin in the waste basket,” so more neutral subjects were placed on the candy papers.

Vareniki offer something for everyone

The best artists worked on the design of the wrappers. Alexander Rodchenko created constructivist wrappers and the poet-futurist Vladimir Mayakovsky wrote short promotional poetry on them. In the museum there is a large collection of such wrappers. According to Pegai, the auction prices of several of them exceed $2,000.

After seeing the exhibition, children are asked to stay and are taken to a special old chocolate workshop where there is a master class on the production of chocolate. Then they can make their own chocolate bar.