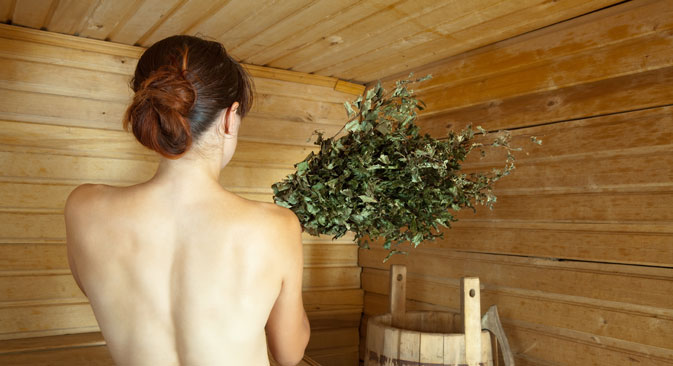 Being "beaten" with twigs is an essential part of the banya experience. Source: Lori / Legion Media

The traditional Russian steam bath, or banya, remains a very special place for the Russians, a place to heal and cleanse one's body and soul. A lot of older banya traditions have been forgotten and lost, but some of them have survived to this day. RBTH has traveled to the Ural region to investigate some of the curious banya rites still practiced in modern Russia.

“A lot of Russia's ethnicities have managed to preserve some very interesting banya rites, passed from generation to generation. In some places, people lose this connection between generations, in others, it survives,” says Vyacheslav Spiridonov from the city of Cheboksary (400 miles east of Moscow). Spiridonov is head of the Informal Association of Bathers of the Republic of Chuvashia and a winner of the Rus Bannaya Russian bathers' festival.

A lot of young Russian women still practice divination rituals in banyas at Yuletide. The women usually wait until after dark, then untie their hair and commence the ritual using cinders, banya besoms or mirrors and candles.

Another banya tradition is “shaking off the thinness.” After the bath, people sweep the water off their skin with their hands, muttering the incantation: “All the thinness goes away like water off a duck's back.” There are some minor local variations, but the point of the rite remains consistent – ever since ancient times, Russians have always valued a sturdy and even somewhat ample build, which was considered a sign of good health.

Bath day for the ancestors' souls

Another interesting banya ritual was revealed by Svetlana Belorussova, a researcher at the Ural Federal University's Department of Archeology and Ethnology. Svetlana directed a ethnographic documentary on the Nagaybaks – one of Russia's most unusual ethnic minorities, inhabiting the so-called “Ural Europe” district – a small region in the Southern Urals comprising several villages with strangely European-sounding names, commemorating Russia's military victories: Parizh (or 'Paris' in Russian), Fershampenuaz ('Fère-Champenoise'), Arsi ('Arcis'), Kassel and Ostrolenskoye (from Ostrołęka).

View the video by RBTH: How to stoke a Russian banya

The Nagaybaks attach immense importance to their identity and still preserve some of their ancient pagan rites. For instance, once a year, on Maundy Thursday, they prepare a banya, but do not go inside themselves, leaving the doors wide open: They believe that on this day, their ancestors’ souls come to take a bath.

According to Vyacheslav Spiridonov, a part of the unbaptized Chuvash community has a similar tradition: On certain days, they go to cemeteries to honor their ancestors and invite them to take a bath. During the rite itself, they also leave the doors open and light candles.

Banya spirit to the rescue

Andrei Artemyev, an attorney from Yekaterinburg, told an RBTH correspondent about another curious tradition, taught to him by his relatives living in a village in the Ural region:

”Once you enter a banya, you must greet the banya spirit and ask him to help you cleanse your body, soul and mind. The banya spirit is one of the benevolent spirits, like a domovoi (a house spirit in Slavic folklore), a dvorovoi (a courtyard spirit), an ogorodny (a spirit protecting the garden) and all the rest.

“After taking the bath, you are supposed to douse your besom in cold water and sprinkle it in all four corners, starting with the one on the far left of you, saying: 'Bannik, o bannik, take away the dirt of our bodies, of our souls and of our minds, take away the evil, the ailments, the sorrows and the sadness.’ The process is repeated three times. Before exiting the banya, you also have to thank the spirit, give a bow and then leave walking backwards without turning your back to it.”

Russian city-dwellers have their own banya ritual: They use the banya to hold regular gatherings and socialize. When the city administration of Kamensk-Uralsky, an industrial center in the Ural region, decided to close the municipal banya, citing “unprofitability,” the enraged citizens started sending angry letters to the mayor and even the governor of the region – the city’s banya had never closed before, even during the Second World War. Sure enough, it was eventually reopened. Marina Zyryanova, a teacher and a banya fan with 30 years of experience, told RBTH: “The public banya is also a community center where people go to meet each other, a club of sorts. And you can always find out about the latest news there.”

Lidya Mokiyevskaya, a linguist from the quaint little town of Belozersk in the Vologda Region, even published a collection of humorous stories entitled Tales from the Banya, which includes amusing anecdotes recounted to her by her friends in the local banya. Mokiyevskaya has been visiting the banya every Sunday for 15 years, and this is also a tradition for her.

Getting steamy, Russian style: A glimpse into the traditional banya