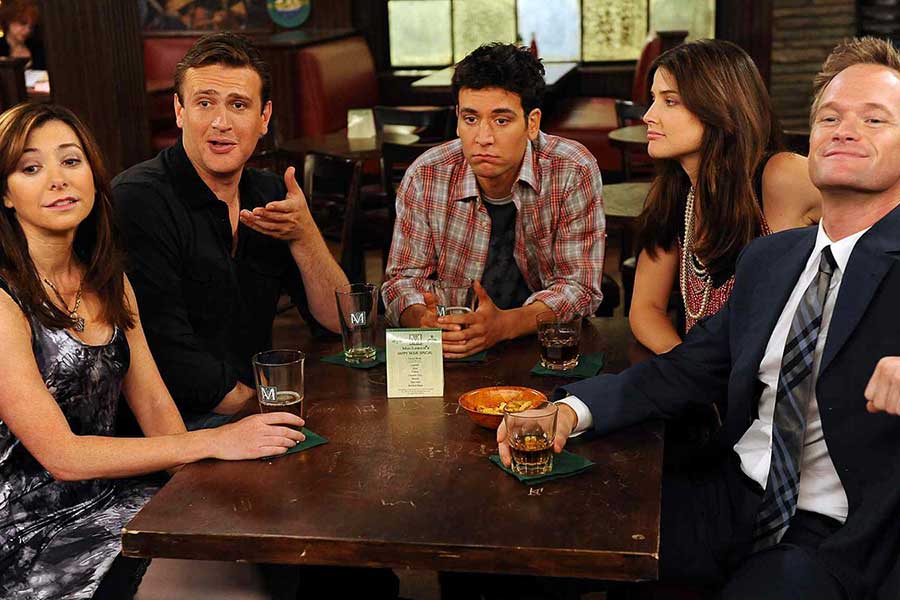 How I met your mother.

kinopoisk.ru
Check out our guide to popular Russian TV shows that might remind you of something you’ve seen elsewhere.

She broke up with her boyfriend, and then he fired her from her job. She tried to sell cosmetics going door-to-door, but then was offered a job as a nanny in the home of a successful music producer. Does it remind you of anything? Sure, it’s the Russian version of The Nanny, an American sitcom aired on CBS from 1993 to 1999.

In Russia, the Jewish-American nanny is instead a young Ukrainian woman with a strong accent and bright outfits. The series was very popular in Russia, aired 2004-2006, five years after the original Nanny finished, and it brought fame to the nanny actress, Anastasiya Zavorotnyuk. Six seasons of the Russian version were adapted, while the 7th season, aired in 2008, was written specially for the Russian nanny.

2. Happy Together / Married... With Children

The first three seasons were absolutely the same as the American ones, and only the name of celebrities and sport matches were changed. The other seasons were written by Russian scriptwriters.

The original Colombian TV series was titled, Yo soy Betty, la fea, and was a major success, adapted in almost 30 countries. In the U.S. it became, Ugly Betty, and was screened one year after the Russian one. Not born beautiful was shown on Russian TV in 2005-2006, with the title appealing to the Russian aphorism, "Not born beautiful, but born happy."

In the Russian version Betty’s name is Katya, and she is a smart but unattractive girl with braces who works as a secretary and falls in love with her boss, who is trying to use her in his own business interests.

This is a Russian adaptation of the Spanish mystical series, El internado. Laguna Negra (The Black Lagoon Boarding School). It was aired in Russia in 2011-2012, and STS Channel director, Vyacheslav Murugov, said it was the biggest success since Not born beautiful.

According to the adapted plot, the teenage Andrei and his little sister are sent to a boarding school after their parents disappear. The school is located in an 18th century mansion that was abandoned after the 1917 Russian Revolution and until the end of the Second World War. After the war and until Stalin's death in 1953, the mansion was a prison for children, so the building and surrounding area have lots of secrets and mysteries that the kids are investigating.

“Everybody lies,” but Doctor Tyrsa’s creators don’t when they admit they borrowed only the main idea of the House M.D. series, and not the whole script. The Russian version of House M.D. features a brilliant surgeon in an elite clinic for athletes. He is an atheist, cynic and doesn’t believe what people say. Each episode is devoted to one complicated issue with sports trauma.

Dr. Tyrsa smokes, drinks alcohol and doesn’t have a good relationship with the woman who heads the patho-anatomical department. There are differences in plot, characters and the main doctor’s personality, but the similarities with the American series are obvious. By the way, American fans negatively reacted to the Russian series.

6. How I met your mother

10 seasons of Ted Mosby recalling how he met his wife was adored by Russian audiences, but it wasn’t successful. In the Russian version, an architect, Dima, falls in love; his friend proposes to his girlfriend Lucy; while another friend, the bachelor, Yura, knows a thousand ways to meet a girl. After two seasons, the adaptation was finished, and wasn’t revived until now.

The comic sitcom Interns has allusions to both Scrubs and Doctor House. Dr. Andrei Bykov has a group of interns who he considers absolutely useless and stupid. They are afraid of him but try to show they’re able to be self-sufficient doctors. Just like in Scrubs, the interns always get into stupid situations and try to find a solution so as not to be punished by Dr. Bykov.

The Russian series is still very popular, and 14 seasons aired from 2010 to 2016. Channel TNT still sometimes shows it, and producers admit the similarities with the American series, but also claim theirs is an original. There are fun allusions to House M.D. In one of the episodes, the chief physician asks Dr. Bykov not to watch House M.D. too much, and in another episode Bykov appears with a cane.

8. The Voronins / Everybody Loves Raymond

The first 10 seasons of the American sitcom, Everybody Loves Raymond, were adapted into the Russian series, The Voronins, which invokes a common Russian last name. Middle-aged Kostya Voronin works as a sports journalist, and lives with his wife, daughter and twin boys. They are your ordinary Russian family.

‘Evil’ is close, however. Kostya’s mother, father and brother live on the same floor of their apartment building and visit frequently. Kostya’s mother teaches his wife how to cook and clean the house, making the young lady nervous.

Despite all the small scandals and fights there’s a lot of love among family members, so it’s a very kind series about family relations and is very popular. Since the 11th season the Russian version uses original scripts.

This adapted series was aired on First Channel, the country’s most important TV station. The plot centers on a young man Alexei, who robs a bank and ends up in prison where his elder brother Kirill is on death row for the murder of a finance minister. Alexei tattooed a map of the prison on his body and wants to help his brother escape.

In reality, Russia has a moratorium on the death penalty, but according to the script the killing of such a major official covinces authorities to allow it.

The Russian version has two seasons and about 40 episodes. Before the start of each show a trailer shows people making tattoos for the main character.

Russian producers purchased the rights for the adaptation of the Israeli series, Prisoners of war, which gave birth to Homeland in the U.S. After a military operation in the North Caucasus, a Russian officer is captured, only to be rescued many years later. After returning home he has psychological and family problems, and seems to harbor a deeper secret.

For now, the Russian version has only one season with 12 episodes. Producers invited the famous Russian film director, Pavel Lungin, to work on the series, while the popular Russian actor, Vladimir Mashkov, plays the main role.

6 fun facts that connect Game of Thrones to Russia