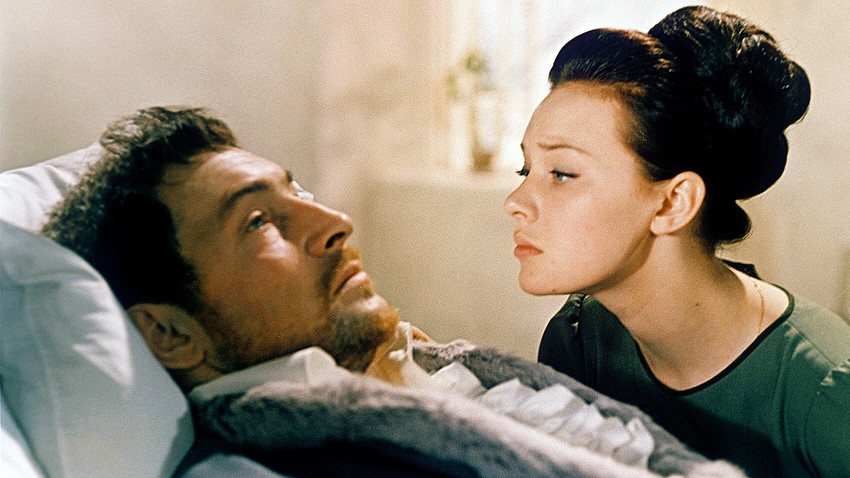 A still from "War and Peace" directed by Sergei Bondarchuk. Mosfilm. 1968.

Global Look Press
Russian viewers might think there are better movies for foreigners to see, but here is what top American film critics recommended for the world’s timeless classic cinema fund. Below we take a closer look at 10 of the most important films.

This black and white drama is based on Jack London’s The Unexpected. A group of five gold miners strikes it rich, and one ends up killing his two friends and two strangers. A married couple eventually disarms the killer, but they can't decide what to do with him - whether to execute justice right there, or take him to the police. The movie, which was made with three actors and on one film set, apparently was too subtle for the general audience, and was only appreciated by critics.

While the list doesn’t include contemporary master Andrey Zvyagintsev, it has four movies by Sergei Eisenstein, who was Stalin’s very talented favorite. This silent movie praises the 1905 Russian Revolution, focusing on the mutiny of the Battleship Potemkin that patrolled the Black Sea. One scene has become iconic - when people run down the famous ‘Odessa steps’ (after the movie the steps were named in honor of Potemkin). The other three Eisenstein films on the list are October (1928), produced for the Revolution’s 10th anniversary; as well as Alexander Nevsky (1938) and Ivan the Terrible, Part I (1944). The later two were made on Stalin’s order, and praise medieval Russian rulers who defeated foreign enemies. According to some critics, Stalin wanted to boost his legitimacy by insinuating that he was continuing the mission of those great leaders in defending Russia.

Pudovkin has three films on the list, but they are part of a trilogy. Along with Eisenstein, Pudovkin is one of the pioneers of the Soviet film industry. Mother is based on the novel of the same name by Soviet writer Maxim Gorky. The hero is the mother of revolutionary Pavel Vlasov, who heroically dies during a demonstration holding a red revolutionary banner.

Pudovkin continued the series with a film that celebrates the 10th anniversary of the Revolution, The End of St. Petersburg (1927). It explains why the Revolution happened and shows ordinary people fighting for their rights. The last movie in the trilogy, Storm over Asia (1928) takes place in Mongolia where a communist revolutionary is captured by the White Army.

Earth shows villages, the lives of rural folk and the drama of the new Soviet reality where private property has been abolished and where collectivism is the ruling principle on state farms. The film glorifies the Russian land, with epic long stills of the countryside accompanied by dramatic music.

Winner of the Palme d'Or at the 1958 Cannes Film Festival (the only Soviet movie to win this award), The Cranes Are Flying is one of the most profound films about the Second World War, and shows how it tragically affected the lives of every Soviet family. Actors Alexei Batalov and Tatyana Samoilova became very famous and popular after starring in this movie.

This film captures the essence of the most painful topic for Russians – the Second World War. It describes the odyssey of an ordinary soldier on his way to see his mother for the last time.

This movie shows the life of the Hutsuls, a Slavic ethnic group living in the Carpathian Mountains in Ukraine, and there’s a Romeo and Juliette type story with feuding households and two young people in love. The girl tragically dies, however, and the young man can’t stop grieving and eventually he dies as well. Another of Parajanov’s films on the list, The Color of Pomegranates (1969), is a parable about the 18th century Armenian poet, Sayat-Nova.

This is the only one of Tarkovsky’s seven films on the list. Andrei Rublev is an episodic film depicting eight moments in the life of the famous medieval Russian icon painter. The film was interpreted by many as an allegory for the plight of artists living under the Soviet regime, and consequently it was not released for a number of years.

Among the dozens of screenings of Leo Tolstoy’s epic novel over the past 60 years, the Harvard compilers chose Sergei Bondarchuk’s masterpiece. This film is loved by Russians, (along with Bondarchuk’s screening of another epic novel, Mikhail Sholokhov’s And Quiet Flows the Don). Americans also loved the film, and it was honored with an Academy Award in 1969 for Best Foreign Language Film. While it’s a must-see, we highly recommend first reading the novel’s four volumes.

This is the only post-Soviet Russian movie on the list, which means that Harvard considers Sokurov to be the only great contemporary Russian director. This movie was filmed with only one sequence shot and no editing. The movie was made in honor of the 300th anniversary of St. Petersburg, and the action happens in the Winter Palace where two time travelers discuss Russian culture, and meet historical figures from Peter the Great to Nicholas II, and see the dark days of the Siege of Leningrad.