Culture
Russia Beyond
Critically-acclaimed conceptual artist, Anatoly Osmolovsky, who challenged post-Soviet society in the 1990s and early 2000s, explains the convoluted contemporary avant-garde. Russia Beyond gives the uncut version. Put your thinking caps on because this might strain your brain! 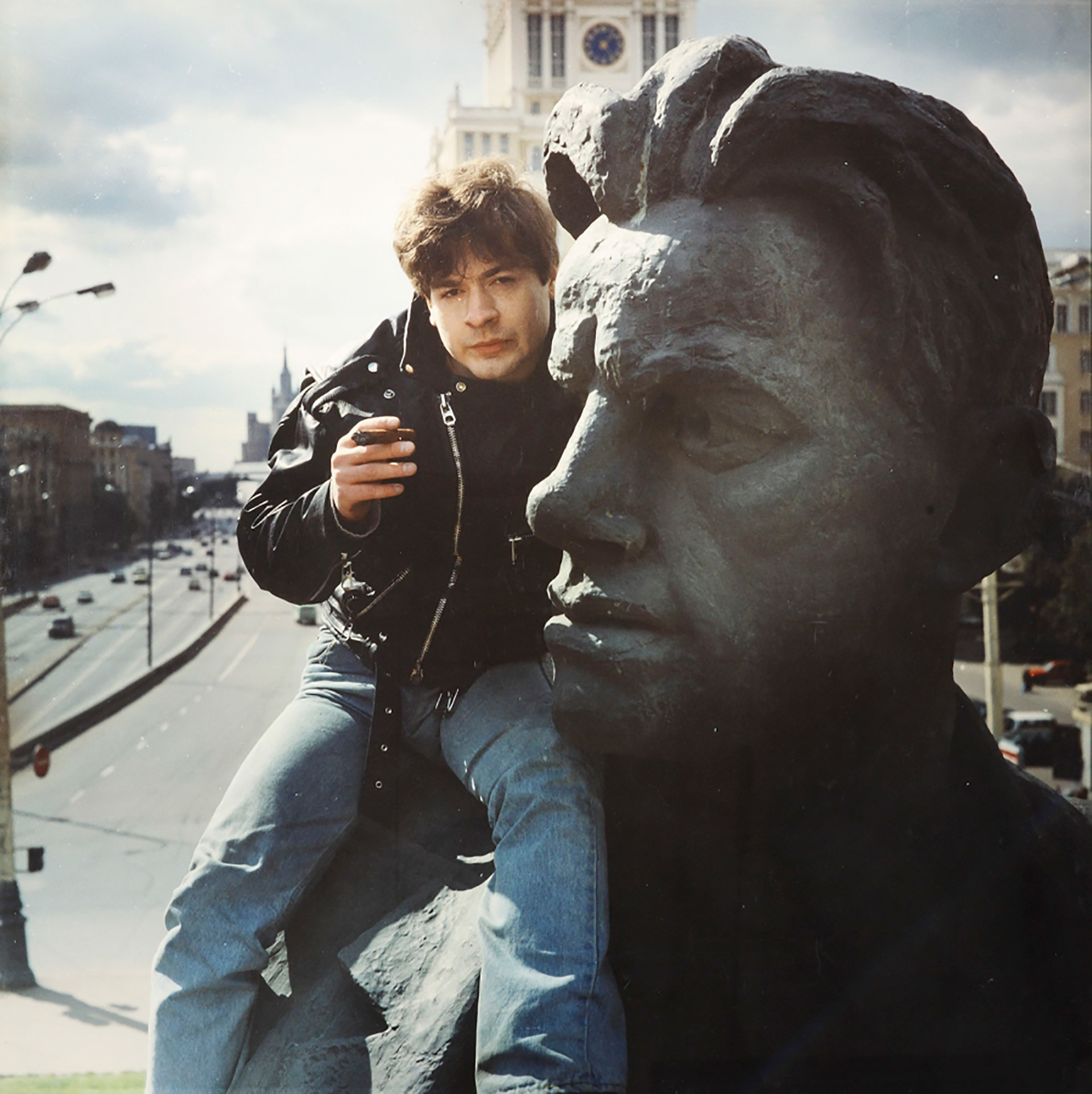 Anatoly Osmolovsky sitting on the monument of poet Vladimir Mayakovsky in Moscow, during the action "Journey of Necesiudik in the land of Brobdingnegs," 1993

The Garage Contemporary Art Museum has published a book of translations of selected articles that originally appeared from 1993 to 2017 in the Moscow Art Magazine. Here is an excerpt from Anatoly Osmolovsky’s essay, “A Generation Kills A Generation,” where he speaks about how a genuine avant-garde artist should act.

I find it hard to understand where the movement in the contemporary art scene originates, but I know how it moves. Here, a fashionable trend has popped up, set off by god knows who; here, a few young people have appeared, with useful connections and wielding a sharp pen; and here come the “artists” – possessors of a limited arsenal of a few fresh ideas. From then on, the usual sequence: critics–collectors–museums. The mechanism works. “Everything is in order and everything is in its place,” writes the French curator Éric Troncy. Boris Groys describes this entire process in detail in his book, On the New. One can agree with this book, with only one reservation – there is no Art here. That which has been analyzed in detail is subject to removal. Groys has superbly analyzed the mechanism of how contemporary art functions and by doing so, has made the process senseless. It is senseless for the contemporary artist to flounder in streams of predictability, because unpredictability is the essence of art. It is the total unpredictability of everything: of the result, of the reaction, of fate.

All of us – creators of the beautiful and the horrible, draped in garlands of words and inarticulateness – we are all hostages of this system. We take part in a dubious enterprise and this dubiousness becomes more than evident after we perceive the complete conformism that has seeped into every molecule of the contemporary art system. While the most talented among us are still able to defend their social autonomy, we cannot dare to contemplate an adequate interpretation of our activity. We have before us living examples, and I too am one: an ideological clown, a decorative revolutionary, a misunderstanding! Such playful little labels are all that one can gain from a postmodernist interpretation. 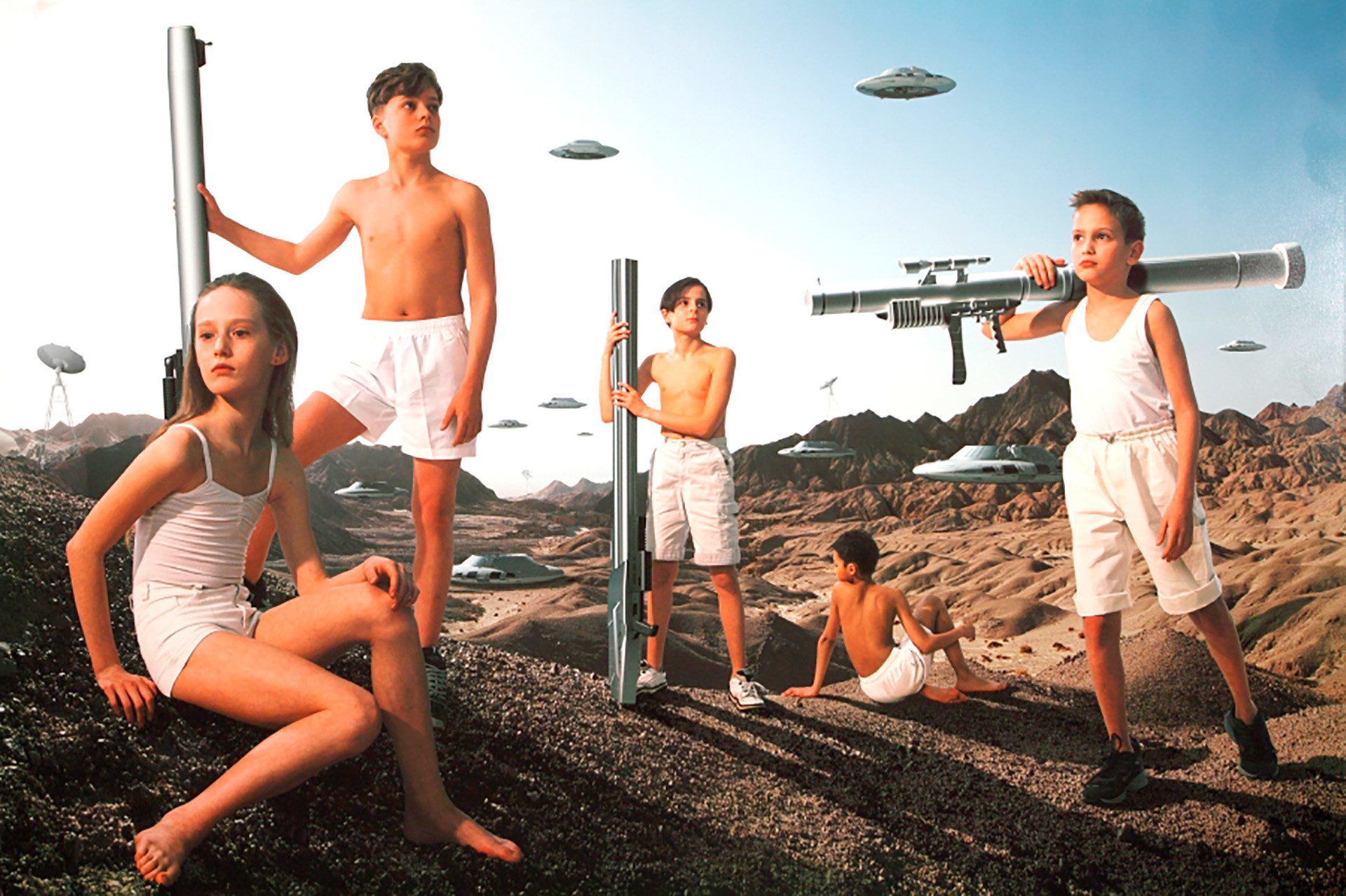 Postmodernism – a term now used as a police officer’s baton when arguing with an opponent – is an object of uncompromising criticism. Setting aside all the confusion that surrounds it, let us immediately shield ourselves from the totality expressed by the well-known formula, “postmodernism is not a trend but a condition.” Truly, one could not have invented a more fitting rhetorical figure for struggle with an opponent! In point of fact, postmodernism is the name of the general competing program of the pragmatic generation of the 1980s. This program, developed in the struggle for control over the means of mass communication, reproduction, and museumification, accomplished its tasks magnificently.

It taught a good lesson on how one makes money out of the void. This fat piece of pork belly, as big as an elephant, is becoming more and more puffed up by its own self-satisfaction and untouchability; but postmodernism is only a competing model, which in turn could be subjected to removal, and replacement.

Fatigue has been growing for a long time. Impatience is straining to burst free. One desires “blood” and the casting down of idols. Now the slogan of the Russian Cubo-Futurists is more relevant than ever: “We’ll throw them overboard from the ship of modernity…”

“The invention and articulation of alternatives may have to precede the production of refuting facts,” wrote Paul Feyerabend. A paradigm shift, a change of systems of preferences presupposes alternative programs that manifest their inherent incompatibility. It is precisely they that can form our perception in a new way. The contemporary art situation urgently requires an external dimension of comparison – a corporative view with a rigorously structured system of values and priorities. Naturally, this view must have nothing in common with the discursive thought of poststructuralism. The new competing program, capable of piercing the membrane of postmodernist quotations, must strive for maximal communicativeness. The slogan, the aphorism, the paradoxical thought: here are the instruments of maximal communicativeness and utmost openness. 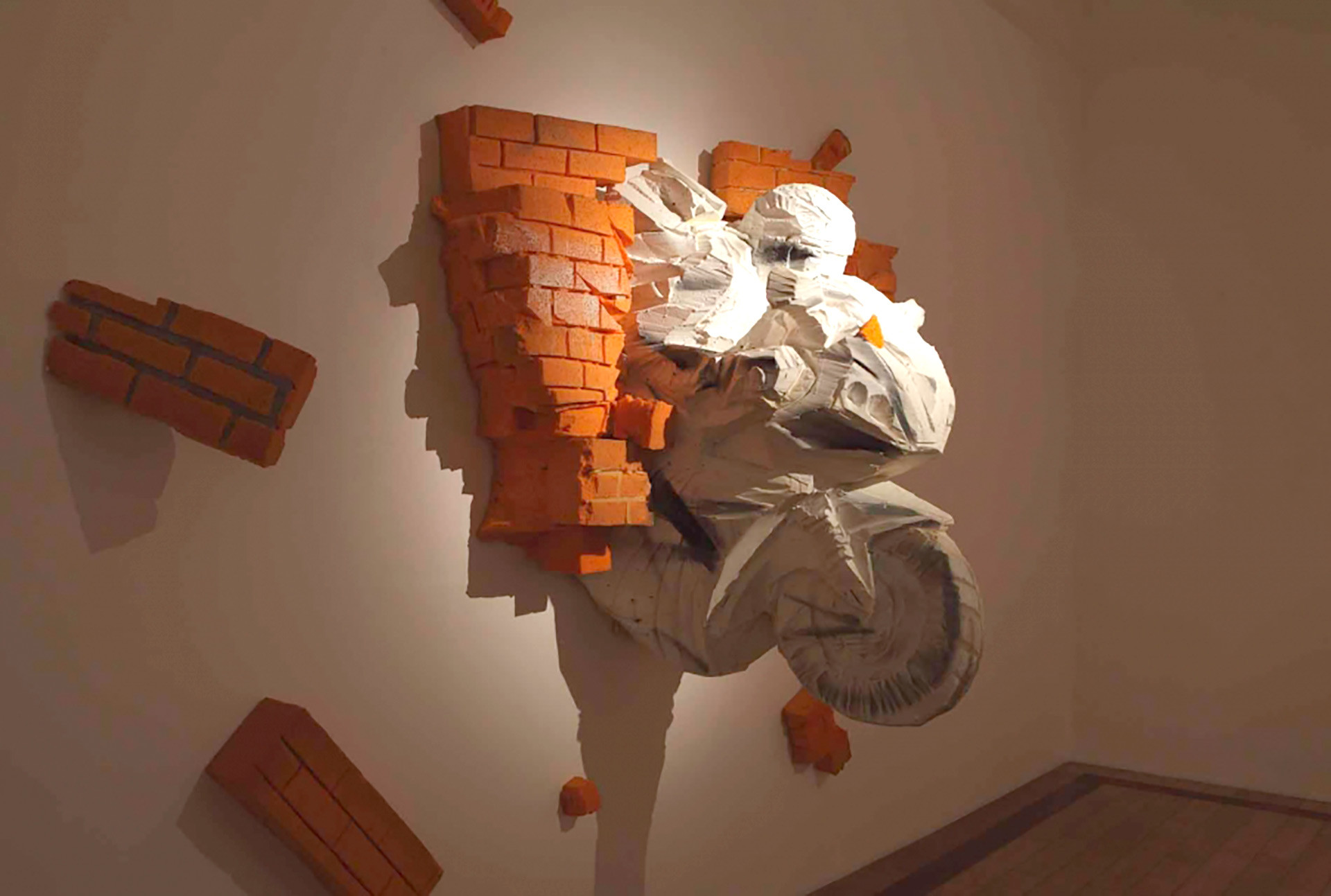 As we gradually comprehend the crisis and the dead-end situation in which contemporary art now lingers – a condition provoked by postmodernist rapacity – we must admit that it may be overcome by having the artists turn to avant-garde forms of expression. These forms have been criticized by the competing postmodernist program for their authoritarian intentions and overblown ambition. Yet right now, they, like no other, are capable of opening the way to the future of art, which has become mired in opportunism and pragmatism.

The contemporary avant-garde is above all a lawmaking initiative; it’s the capacity of making a choice, of engaging in speculative transactions, of calling things by their names. A lawmaking initiative is opposed to the conciliation and the pluralism of postmodernist rapacity. Reconciliation, mediation, and compromise – such are the foundations of modernism. By carrying out the functions of dialogue organizer, the postmodernist-intermediary profits in the literal and figurative meanings of the word. War – here’s a factor that excludes intermediaries. True equality is found in war between two incompatibilities and not in a hypocritical reconciliation.

A true avant-garde requires an enemy, an ideological enemy, a personal enemy. In this matter, nothing is more reliable than sustained segregation by age. “Young wolves” – this was the name given to New Wave directors in France, asserting their collectivity on the basis of age. I like this name because it unambiguously dots the i’s and crosses the t’s.

Questions that interest the artist of the 1990s are simple, like the tests given by a psychoanalyst: Tell me about the happiest day of your life. What scares you most in life? What can you say that would spoil someone’s mood? And so on. The contemporary artist is someone who has found the strength to show himself as is. Honesty above all.

The artist’s position cannot be determined by the opposition positive/negative, because the artist is the producer of the negative. 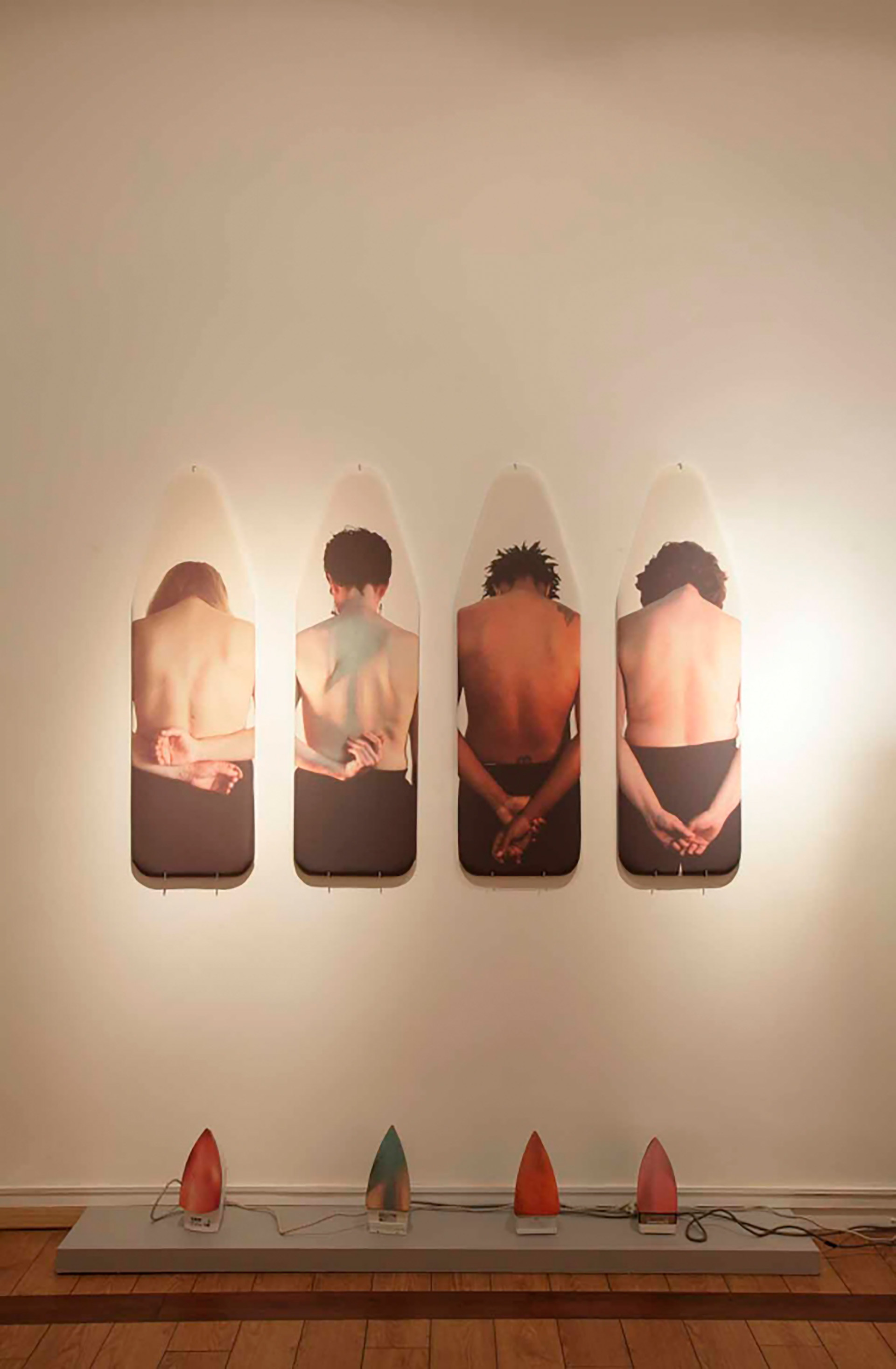 The contemporary artist is someone capable of constantly disclaiming responsibility for acts that they have committed. This does not mean being irresponsible, but constantly searching, finding and aestheticizing a reality that has not undergone aesthetization. Scandal always accompanies such actions, for reality does not know compromise – it simply exists. The contemporary artist transforms it into a text with a single glance, but at the moment of transformation we see the Body: the desired result of the avant-garde artist’s quest.

Current Russian reality offers rich material for such actions. Small ads in the free newspapers Iz ruk v ruki (From Hand to Hand), and Vse dlya vas (Everything for You), signs and billboards – here is a reality that requires immediate critical aesthetization. Advertising as the matrix of its immediate critical aesthetization. Advertising as the matrix of a new style, together with the avant-garde pathos (incompatible with advertising), can create a unique phenomenon whose internal contradictions, and lack of it, will be the most appropriate reaction to today’s splintered world. This centaur of art, a volatile mix of Pop Art and Futurism, is drawing its bow, aiming to pierce the heart of the world with an arrow.

The book can be purchased online by U.S. readers here, and in Europe here. It will also soon appear in Calvert 22’s shop in London.

Thanks for reading this until the end. If you understood even half the text on the first read, then count yourself an honorary member of the Russian intelligentsia! Want more, you say? Well, here are post-modernist photos inspired by Russian fairy-tales.