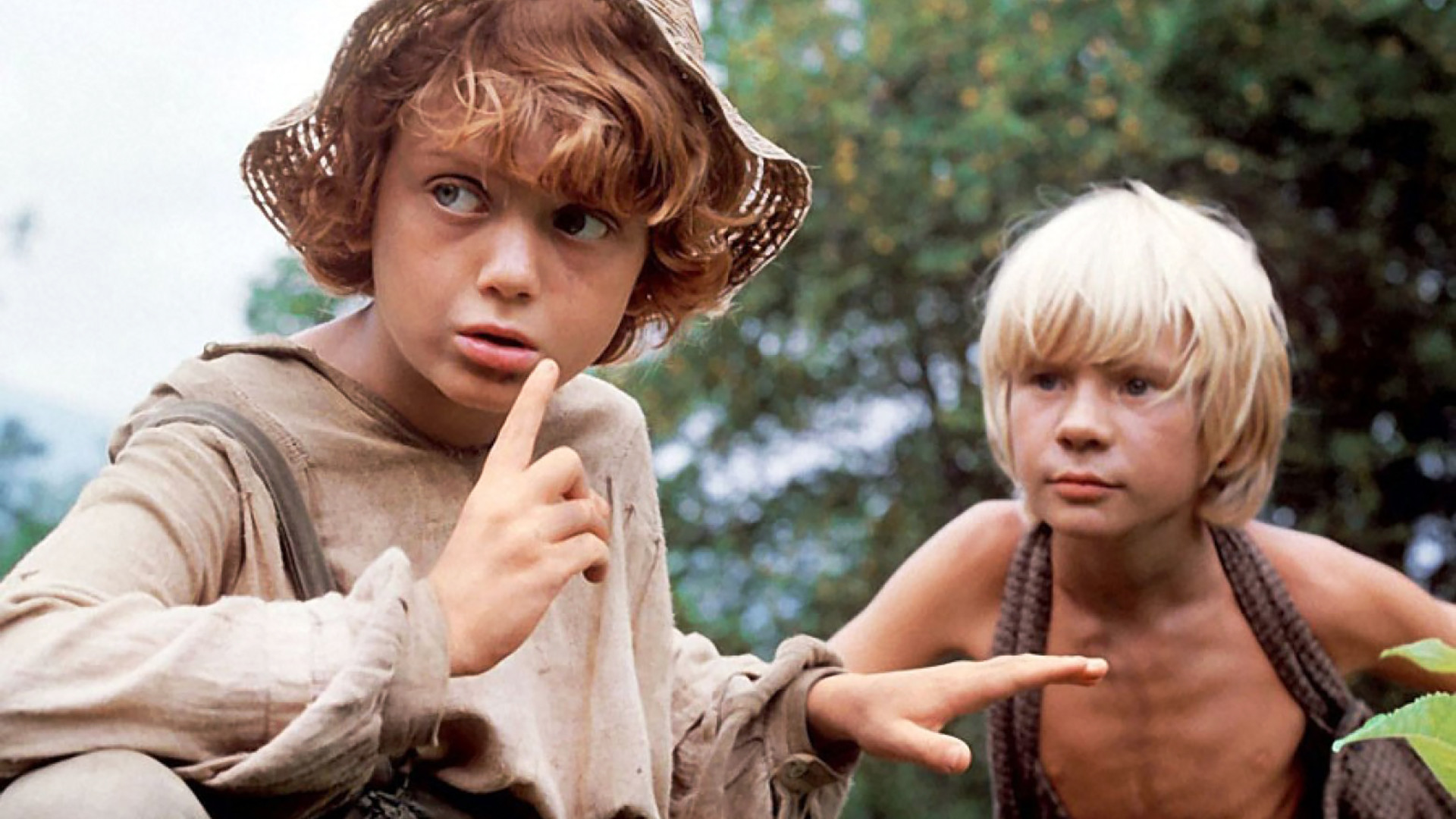 A screenshot from 'The Adventures of Tom Sawyer and Huckleberry Finn'

Tom Canty, a young poor boy from London, occasionally finds himself in the Royal Palace face-to-face with his double Prince Edward, and the narrative of Mark Twain’s story often appears in world cinema. “The Prince and the Pauper” has been adapted into film 10 times, from the first movie made in 1915 in the U.S. to the most recent – 2000 in the UK.

In Russia, there are two famous adaptations: A black and white movie from 1942, directed by Erast Garin and Hesya Lokshina, and a color TV film by Vadim Gauzner filmed in 1972. Initially, Gauzer planned to shoot a musical but this didn’t happen.

Despite the these films were made for children the political irony is crystal clear. It’s also interesting to see how one actor plays two different characters so brilliantly the dual role is almost invisible to the viewer. And of course, the director made sure to keep the inimitable sense of British humor.

The Adventures of Tom Sawyer and Huckleberry Finn (1981)

The small but brave heroes look for treasure, become “pirates,” and enter into a dangerous battle with the Indian Joe. The Soviet adaptation of the famous Mark Twain’s novel is still admired by all Russian children. The three-part film by Stanislav Govorukhin was shot in Odessa, Sukhumi, Kherson, and even in the New Athos Cave in Abkhazia. The Dnieper River starred as the Mississippi.

Perhaps the most famous Soviet film based on O. Henry's work is the comedy Strictly Business, shot by cult director Leonid Gaidai in 1962. Three short stories make up the plot: “The Roads We Take,” “Makes the Whole World Kin,” and “The Ransom of Red Chief.” The final episode was masterful: Some con artists kidnap a rich man's son and hold him ransom, but in the they beg the father to take the unbearable tyrant home, even paying him to do so.

The Soviet black and white movie by Alexander Zguridi became the first screening based on the novel by Jack London. A young engineer saves a dog during a bloody dogfight but it takes time for White Fang to warm to the man. Interesting fact: The role of White Fang in the film was played by the legendary dog Dzhulbars, who played a role in the Great Patriotic War by helping to clear mines from palaces on the Danube River, castles in Prague, and cathedrals in Vienna.

The novel of the same name by Jack London was turned into a four-part adventure film. The young writer decided to visit a friend and sails from San Francisco to the other side of the bay in the fog – his ferry collides with a large ship and sinks in minutes. He was rescued unexpectedly: A ship passing by noticed the man in the water. That’s how the writer met the captain “Wolf” Larsen. The director places their philosophical dialogues at the center of the movie.

Another four-part film by Igor . The story takes place in the mid-20th century in a small American town. The grandparents of the main characters make special wine from dandelions, that makes a person see the world in a new way. In 1998, the adaptation received "The Wisest Film" award. The adaptation of Ray Bradbury’s novel was the last role of the famous Russian actor Innokenty Smoktunovsky.

Leonid Nechaev's movie is based on the “Thomasina” novel by American writer Paul Gallico. In a provincial Scottish town lives a little girl with her father, a veterinary doctor, who becomes after the death of his wife. The girl’s cat gets sick and her father euthanizes it instead of trying to cure it so his daughter stops talking to him. A hermit woman called Lori tries to help the family and the tragedy of the often reduces the audience to tears.

This flick was shot by the famous Russian director Andrei Tarkovsky (Solaris, Stalker) while he was still at university. Nevertheless, the short film based on Ernest Hemingway's story was highly appreciated by the Soviet filmmakers. Tarkovsky himself can be spoiled in the film as a bar visitor.

William Faulkner’s novel became the basis for the film going by the same name by Nikita Tyagunov. The Russian film director transferred the action from WWI to the Soviet-Afghan War. But the story about the mysterious double remains as sinister as Faulkner’s plot.

The American journalist and the writer John Reed witnessed the 1917 Russian Revolution. He was a great supporter of the new socialist regime in Russia and saw the storming of the Winter Palace himself. He later wrote about these events in his most famous book “Ten Days That Shook the World” (1919) that became the basis for the Sergei Eisenstein’s movie October (1928). Thirty years after, Sergei Vasilyev made John Reed one of the main characters in his movie In October Days based on his book.

Did you know John Reed is one of the few Americans buried near the Kremlin walls in Moscow? Here’s why.