Culture
Irina Osipova
Buildings from this great architectural period can be found throughout Russia, from St. Petersburg and Moscow to Vladivostok.

Throughout the world, Russian architecture is first and foremost associated with Constructivism. The main architectural achievements of the preceding period, from the late 19th to early 20th century, are linked to the French and Belgian Art Nouveau style or the Vienna Secession. But in there are equally outstanding examples of this style, known as “Modern.” Russia Beyond has chosen 10 buildings from this great era that are located throughout the different corners of Russia. 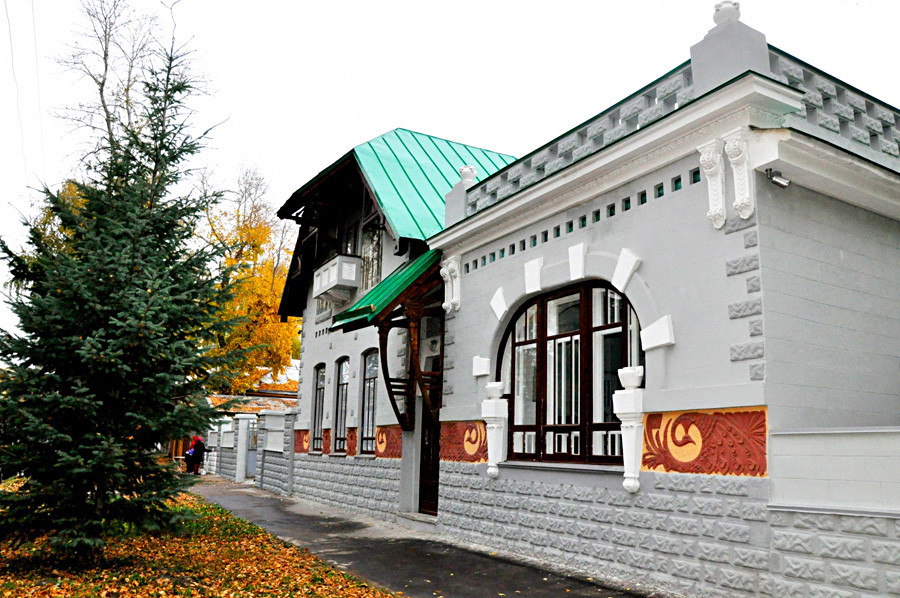 Architect Fyodor Livchak built this house for his family in 1914. Giving free rein to his imagination, he designed everything, including the interior details and the furniture. The architecture combines features of European Art Nouveau—large horseshoe-shaped windows, curving porch supports and ceramic panels—with traditional Old Russian elements, such as a at the level of the ground floor windows depicting the stylized Firebird from Russian fairy tales. During construction, Livchak tried out his own invention—fireproof cavity blocks made of concrete. He also designed a machine for making the blocks and developed a system for laying them. The United States tried to buy the patent for his invention but was turned down. Following in 2014, a museum devoted to the architect was opened in the house. 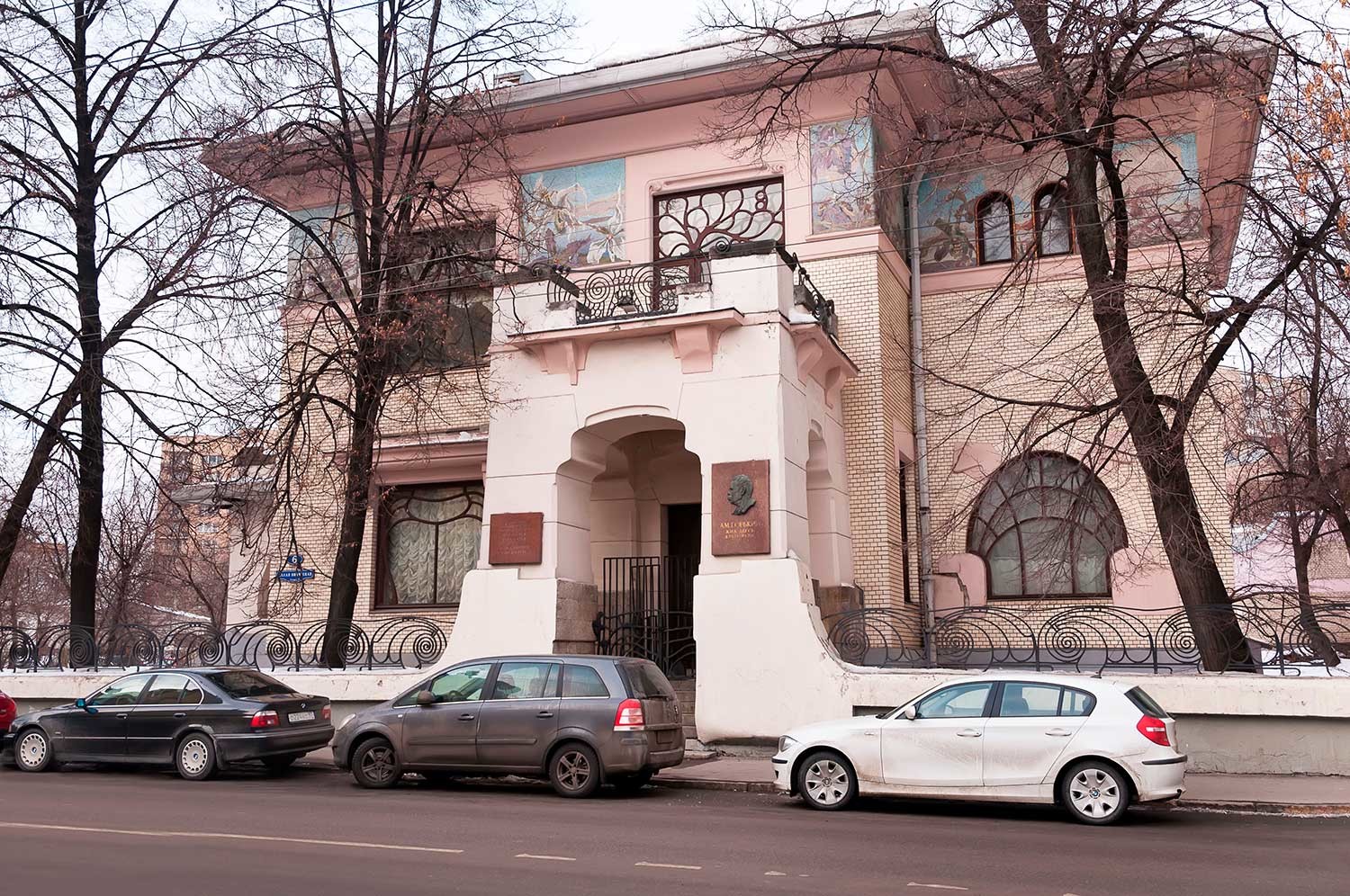 One of the best examples of Art Nouveau in Moscow, this house belonged to the banker and founder of Russia’s first car factory Stepan Ryabushinsky and was built between 1900 and 1902 by the most successful architect of the time, Fyodor Schechtel.

The building doesn't have façade. Rather, each facade is expressive in its own way, with entrances, balconies and windows with irregular shapes and varying sizes, adorned with whimsically designed wrought iron grilles. Like European architects, Schechtel drew inspiration from the natural world. On the outside, the building is girded by a mosaic frieze depicting irises. Inside the ceiling features starfish and snails. The fireplace is decorated with a woman in the guise of a dragonfly, the entrance hall is lit by a jellyfish lamp and the culminating feature of the interior is a staircase in the form of an undulating wave made of artificial marble.

After the revolution, Soviet writer Maxim Gorky lived in the building, which now houses his memorial museum. 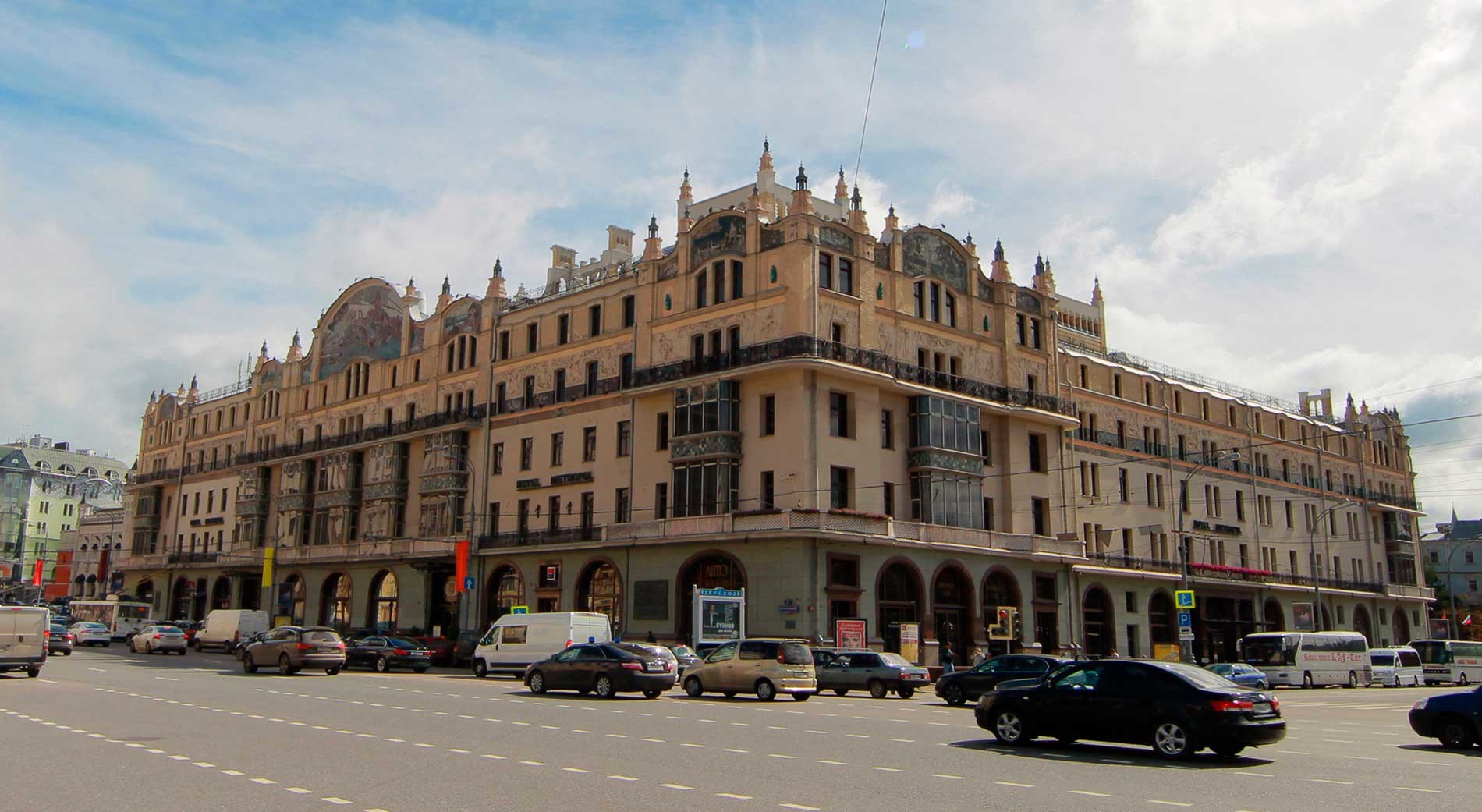 Contemporaries called the building “a manifesto of the new style.” The entrepreneur and patron of the arts Savva Mamontov began construction but soon went bankrupt, and so the building turned out more modest than initially planned.

The main architect was Lev Kekushev, known for building entire parts of Moscow in the Art Nouveau style. The top of the facade, curving like a wave, and its little finial-topped towers create an expressive silhouette against the sky.

The main decorative feature of the facade is a set of ceramic murals made by the best Russian Art Nouveau artists at Mamontov's factory. The central piece features Princess of Dreams, based on a drawing by Mikhail Vrubel (the subject is taken from the drama by Edmond Rostand) and at the sides consist of Worship of the Deity, Bath of the Naiads and other compositions based on sketches by Alexander Golovin and Sergey Chekhonin. Nikolay Andreyev executed the sculptural frieze The Four Seasons with semi-nude female figures. 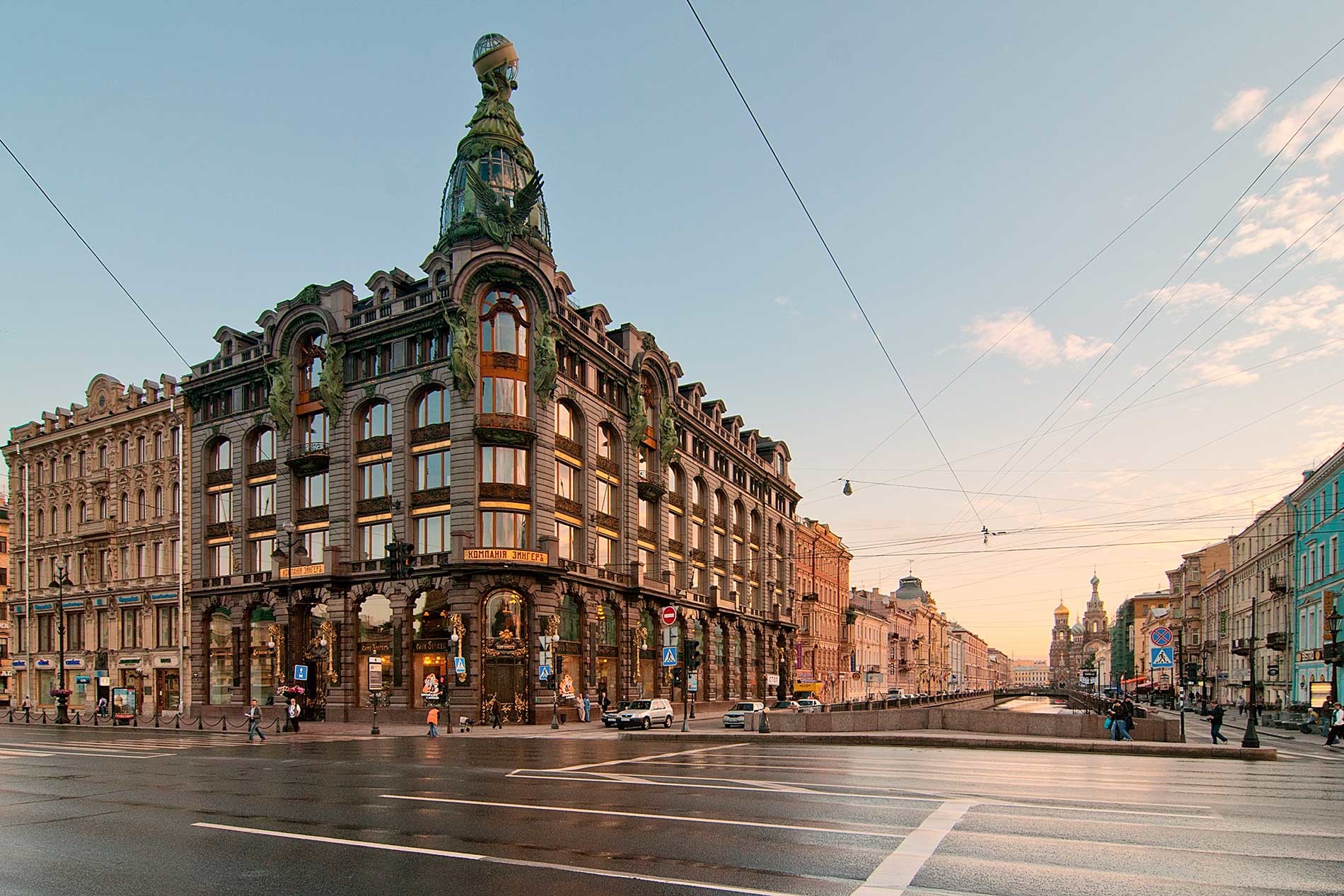 American Singer Company constructed this building between 1902 and 1904 to serve as its office in Russia. The company had planned to build an 11-story building in the style of New York skyscrapers, but in St. Petersburg it was prohibited to erect buildings taller than the Winter Palace (23.5 meters), forcing amendments to the project.

Russian architect Pavel Suzor, who was in charge of construction, found an elegant way solution—the building’s six floors do not exceed the maximum altitude, but the ethereal tower with its glass globe on the corner creates a sense of skyward motion. The building was the first business center in Russia with trading, banking premises and offices for rent. The architectural decor combines features of eclecticism and Art Nouveau. The building inherits its austere granite cladding and bronze Valkyrie maidens from the past, while features of the new style include the floral design of the wrought-iron balconies and grilles, which is also repeated in the interior decoration.

5. The house of Molchanov and Savina in St. 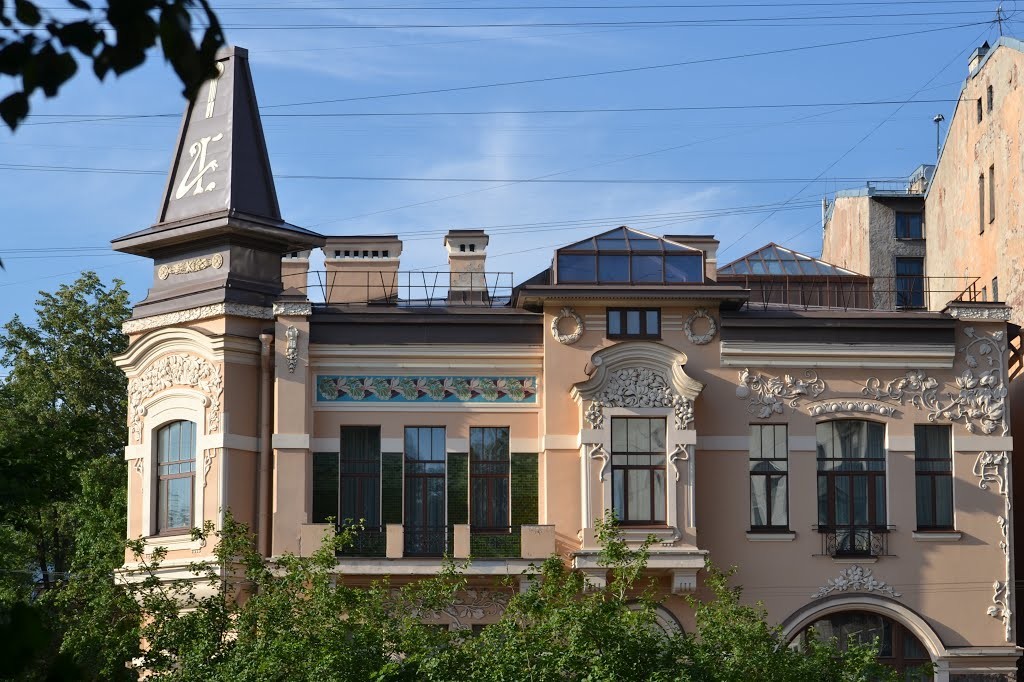 house was built between 1905 and 1907 for Maria Savina, a famous actress of the Imperial Theaters, and her husband, Anatoly Molchanov. The profession of the mistress of the house was reflected in the interiors. Apart from the usual reception rooms and living quarters, a room for storing theatrical costumes and a makeup room were also included, while the stained glass that survives on the staircase and in the entrance hall illustrates literary subjects.

The architect Mikhail Geissler built a lot in the neo-Classical style, but here he fell under the spell of Art Nouveau, which was gaining currency at this time. The facades are designed with maximum freedom, practically no two windows are the same shape and size, and the stucco wall decoration based on sinuous plant and flower motifs makes it look like a building straight from the Vienna Secession. 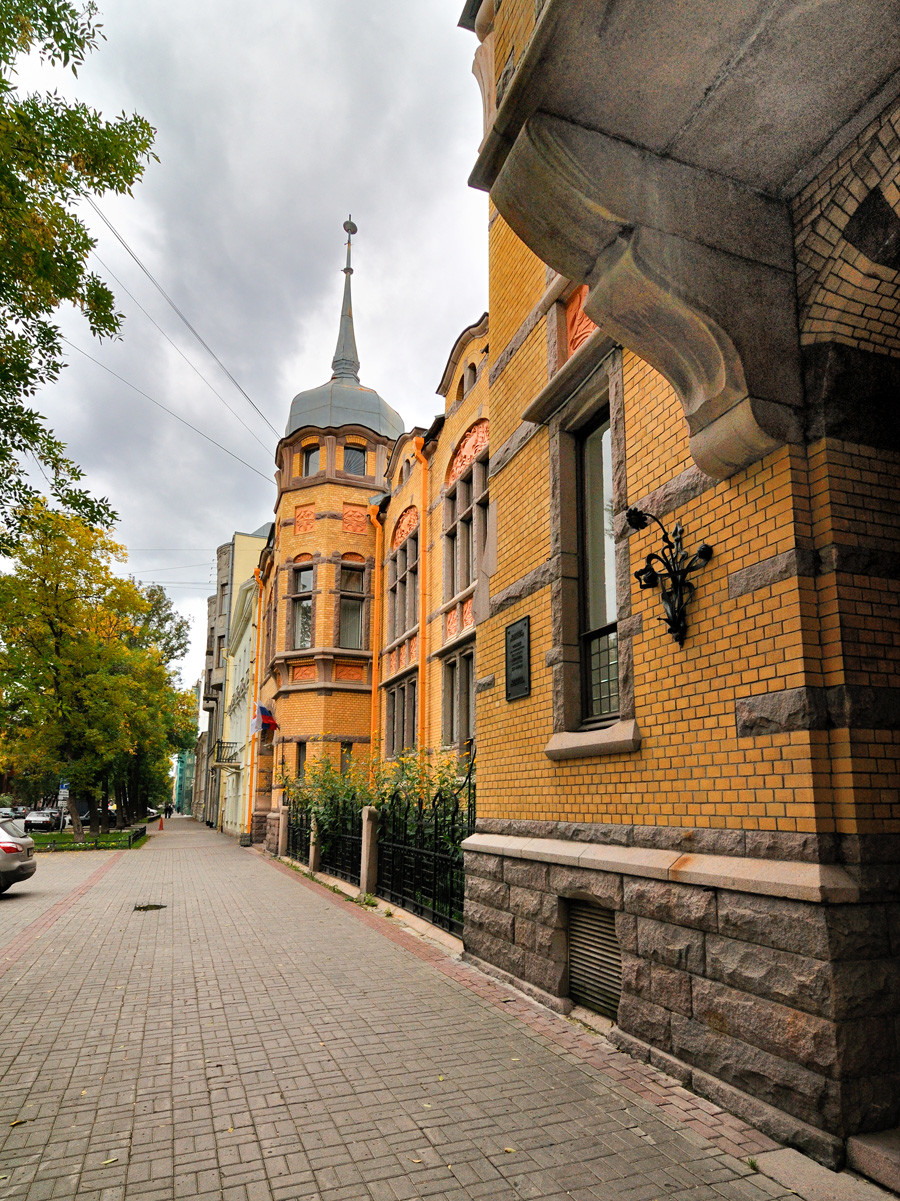 This was one of the city's first Art Nouveau buildings. Carl Schmidt, a Russian architect of German descent, built the house in 1900-1901 for merchant Pavel Forostovsky, who wanted the building to provide living quarters and offices as well as storage space for merchandise in the basement. There was a conservatory with a glazed roof in the right-side single-story part of the building. Whimsical plant-inspired motifs on the artificial stone reliefs and on the building's stained glass windows, the juxtaposition of light-colored granite facing tiles ordered from Europe, as well as the forms of the window entablatures and arches, speak of a kinship with French and Belgian Art Nouveau architecture. 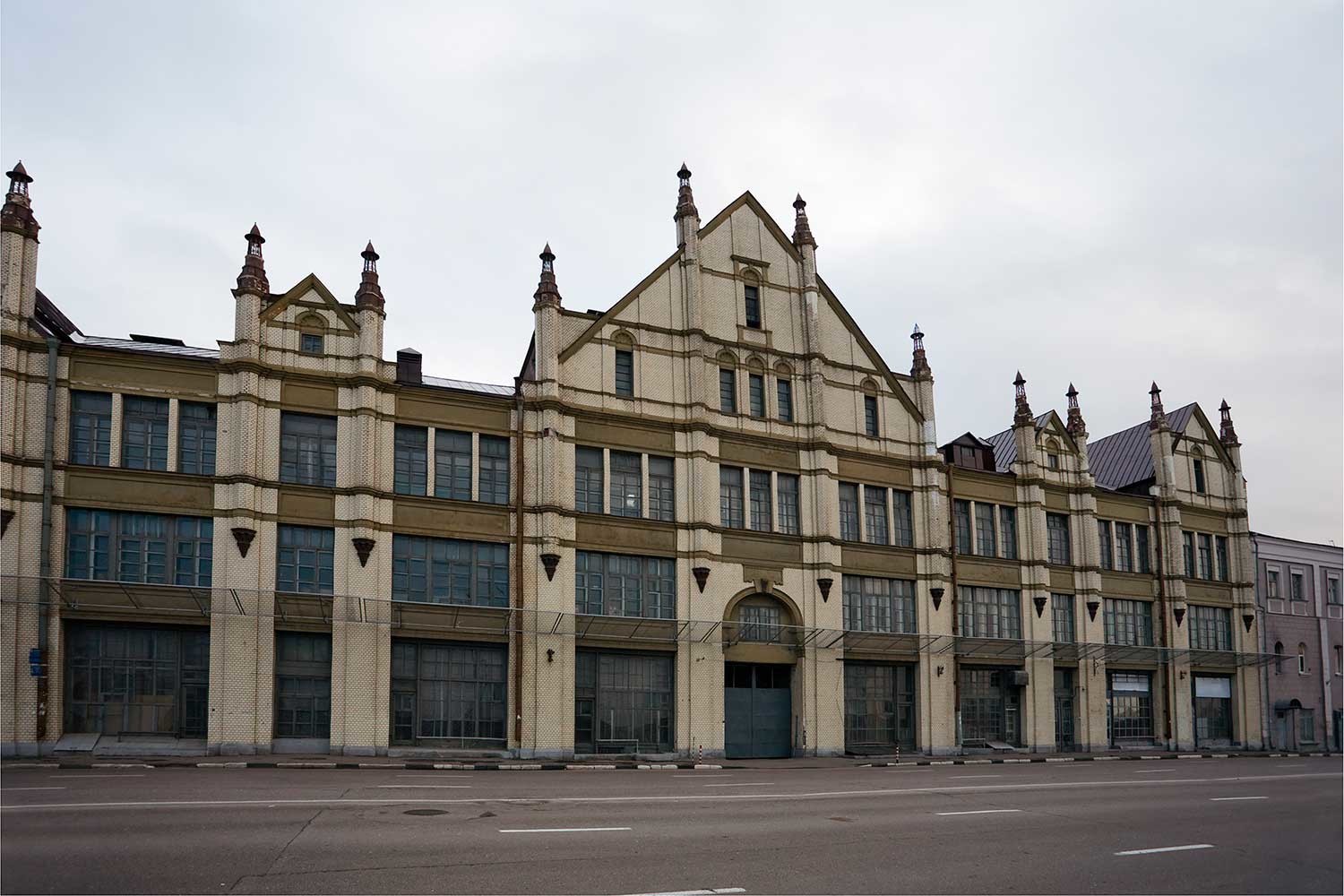 facades of these two large adjacent buildings on the same plot of land look out onto two different streets. They were built by Sergei Rukavishnikov, the town’s most important dignitary for a long time, and so it is no surprise that Rukavishnikov invited Fyodor Schechtel, the most fashionable and expensive architect at the time, to design them. 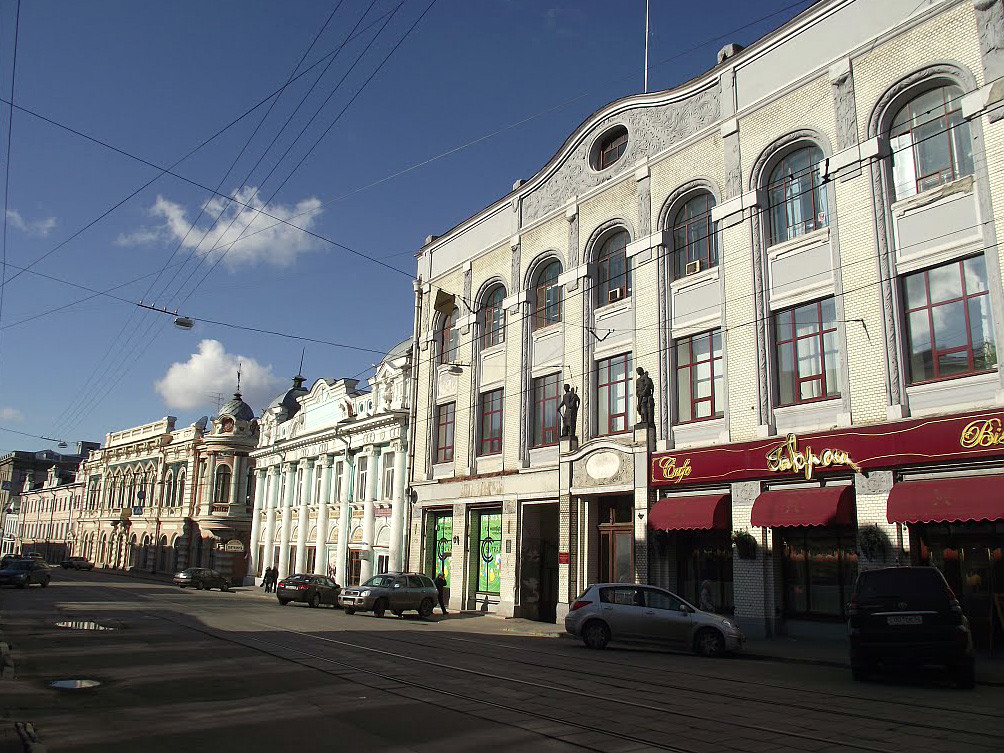 Both buildings—constructed in 1908—are examples of “rational” Art Nouveau, a style that was popular for industrial and commercial architecture. The facades are symmetrical, and their surfaces divided up by clear vertical and horizontal lines. A favorite device employed by Schechtel and other Art Nouveau masters was to combine glazed facing bricks with stuccoed surfaces. The main decorative element of the bank building is the motif of fanciful burdock leaves, the Russian equivalent of the thistle, which representatives of the Nancy School were particularly fond of. The pointed roofs and narrow turrets of the commercial building “paraphrase” of European Gothic, but the almost continuous expanses of glazing betray the fact that we are in a new era. 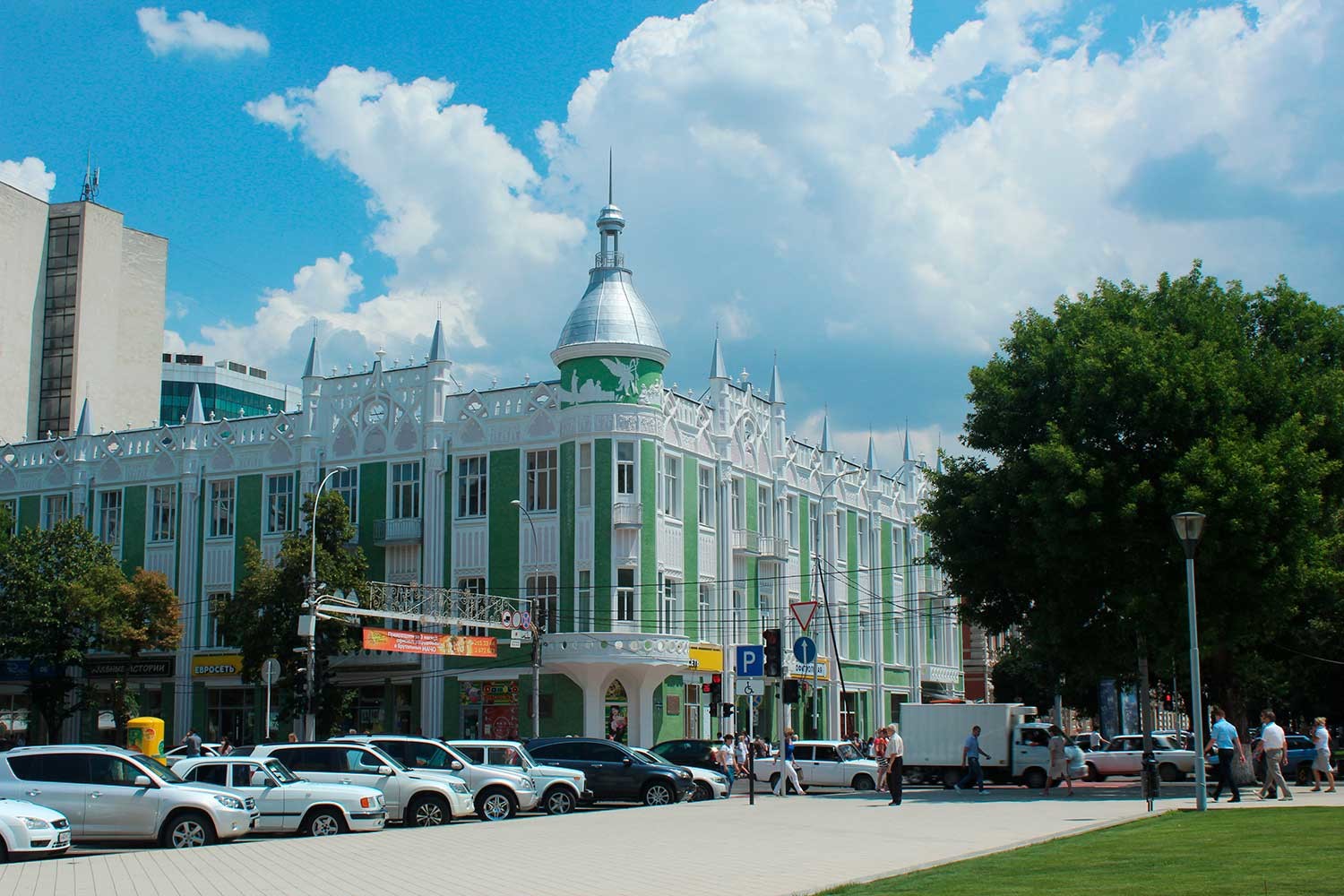 Central Hotel, which stood on this site since the middle of the 19th century, was regarded as one of the best in the city and was owned by the Bogarsukov brothers, who were wealthy merchants. The ground floor of the two-story building was given over to shops, while the hotel bedrooms were on the first floor.

Following a fire in 1910, the owners commissioned the architect Alexander Kozlov (one of Schechtel's assistants in Moscow) to take charge of reconstruction. He fully retained the old building, strengthened the brick structure with steel beams, added a third story and devised a new decorative scheme with pseudo-Gothic turrets and arches that echoed the cupolas of nearby churches and gave the building a lace-like lightness. Bands of green glazed tiles run up the whole building—a simplified version of the plant and marine life motifs beloved of Art Nouveau. 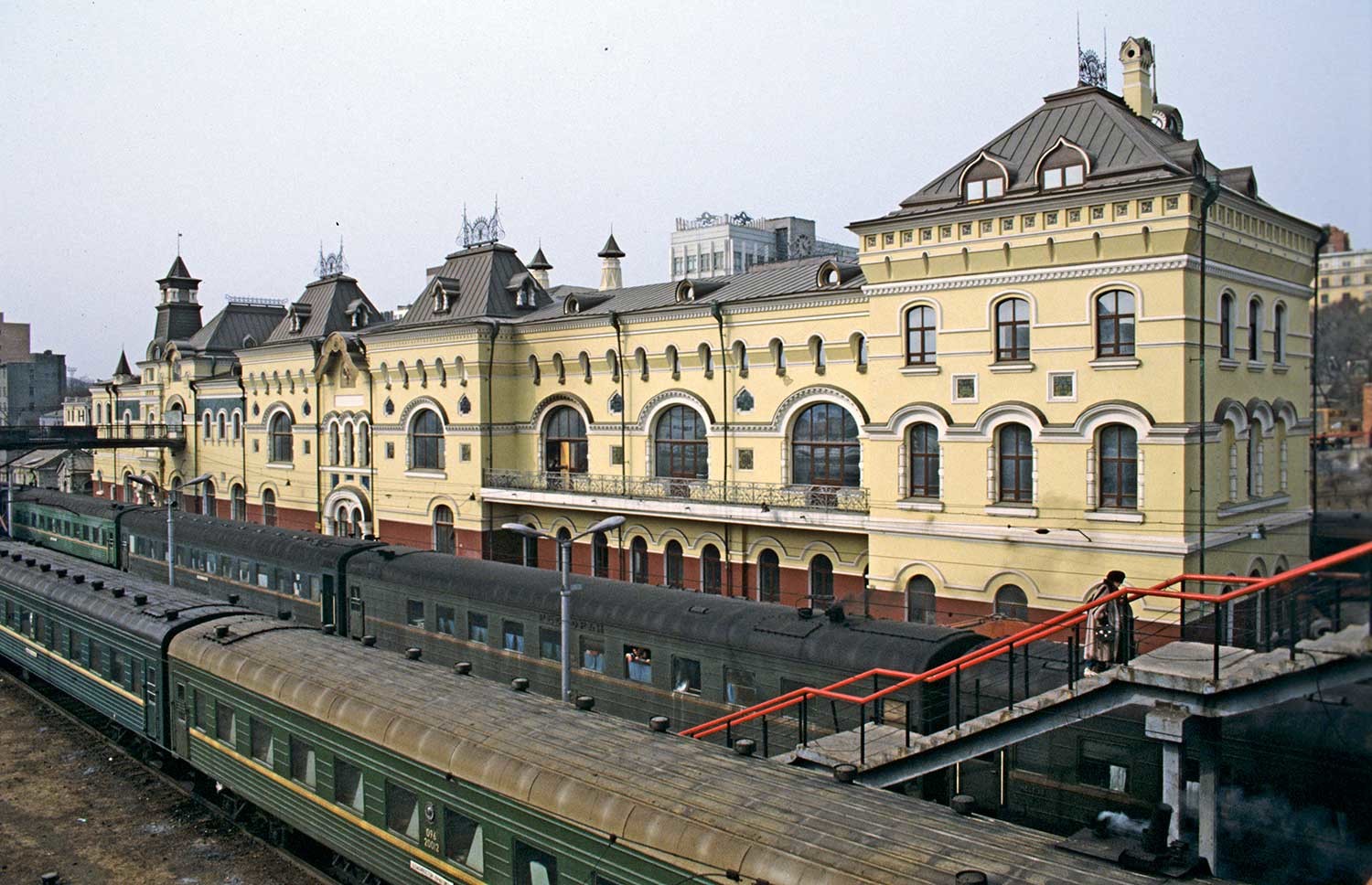 In 1910, as the construction of the Trans-Siberian Railway linking Moscow and St. Petersburg with the Urals and East was approaching completion, it was decided to give the railway terminal in Vladivostok a similar appearance to Yaroslavsky Railway Station in Moscow, which had been built by Fyodor Schechtel. Both buildings are examples of the neo-Russian style—the Russian version of Art Nouveau. Wide arches, thin arrow-slit windows, towers, tall trapezoidal roofs and the squat solidity of the whole building were borrowed from Old Russian palaces of the 17th century while, at the same time, undergoing a fundamental reinterpretation. 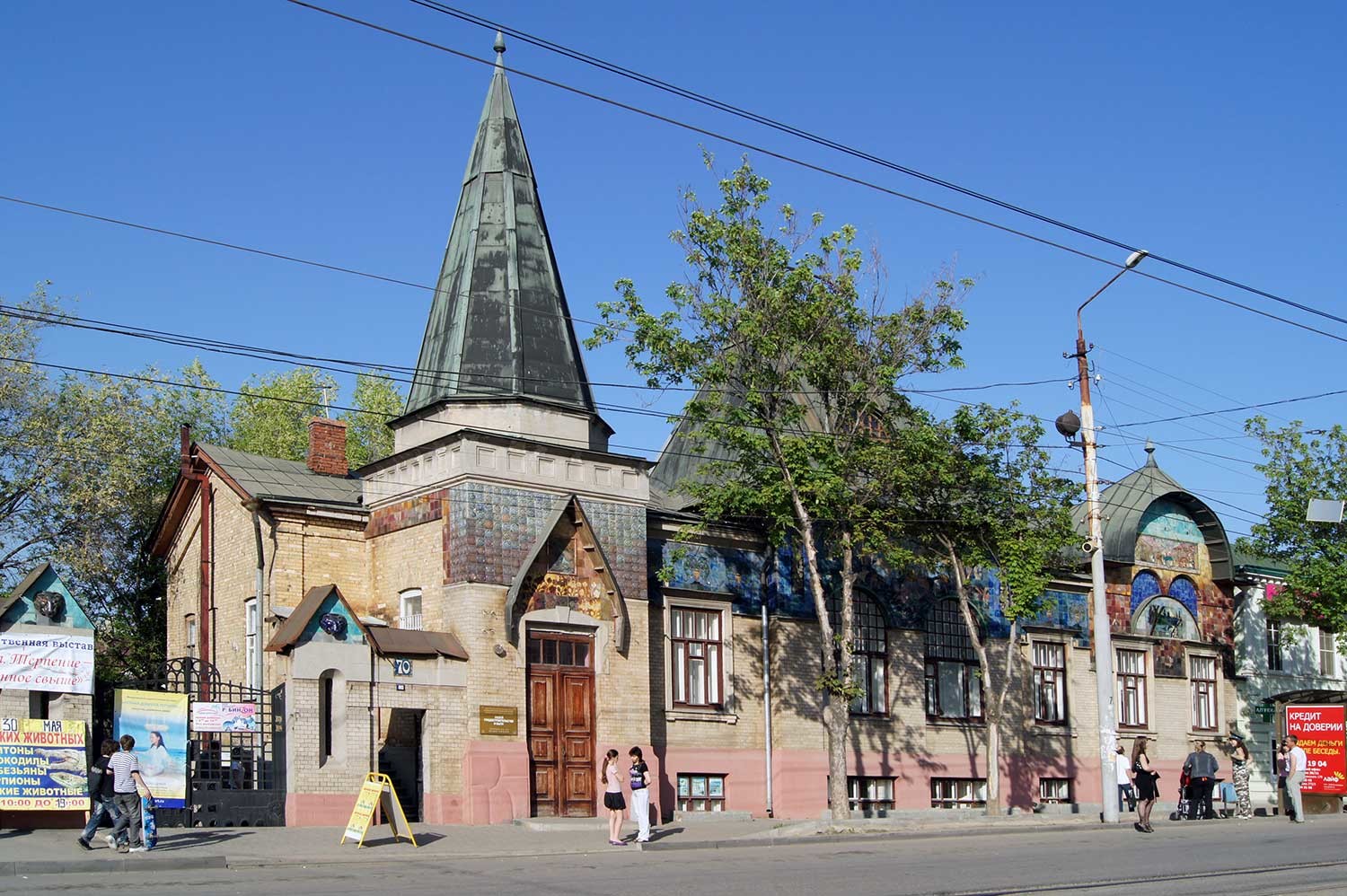 This is another of Fyodor Schechtel's projects outside Moscow. The building was commissioned in 1912 by the Taganrog landowner Evgeny Sharonov for his daughter Maria. It embodies the synthesis of all arts, an idea that was popular in the early 20th century. The architecture is in pseudo-Russian style (including towers and helmet-shaped cupola) and complemented by ceramic panels. These include Sea Battle, based on sketches by the famous fairy tale illustrator Viktor Vasnetsov, and The Boats Set Sail, which is executed in the style of Nikolai Roerich. Small turrets at the gate are decorated with sculpted lioness masks, the work of the outstanding Russian Art Nouveau artist Mikhail Vrubel.

Read more: 10 Soviet avant-garde buildings from Moscow to East that will blow your mind