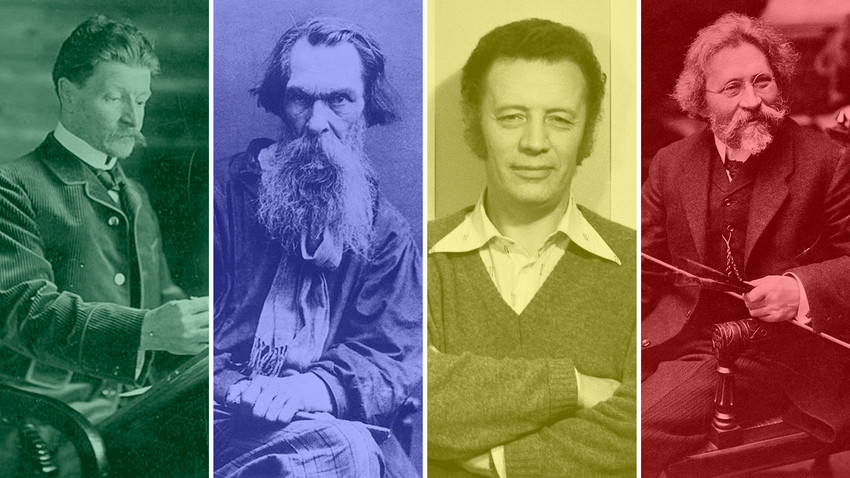 Wikipedia, TASS
Painting without the ability to differentiate colors may seem far-fetched, but great artists always find a way to express themselves. Take Beethoven for example, he was deaf when he composed many of his works. These Russian artists also triumphed in the face of adversity and prove that seeing the world in a different shade doesn’t have to be a hindrance.

Savrasov, the artist behind the famous painting "The Rooks Have Arrived" (1871), suffered from a serious infectious disease, which robbed him of the ability to distinguish color. As a result, he painted his last works by memory.

Sadly, his fate was a tragic one. Savrasov was a brilliant painter from an early age and became an academic at only 24-years-old. He was highly respected among his contemporaries but died three years short of his 70th birthday - poor, without friends or family, and a drunk.

Repin was another famed artist to be struck with color blindness. In his old age he tried to restore his work "Ivan the Terrible and His Son Ivan, November 16, 1581" which he initially painted in 1885. However, due to his poor vision, Repin distorted the color range in the picture, and it was never completed.

Restoration was required in January 1913 when an Old Believer icon painter Abram Balashov cut the painting with a knife in Moscow’s Tretyakov Gallery, where it was being shown.

Repin immediately went to the Tretyakov and started repainting the damaged work, but the colors didn’t match. It was only possible to restore the work thanks to the excellent photographs that had been taken before the damage occurred.

The brilliant Russian artist Mikhail Vrubel liked to work with somber colors. His picture "The Princess-Swan" (1900) is painted in various shades of grey, while his "Lilacs" (1900) displays light green and purple tones. "Pan" (1899) consists of grey and ochre colors.

The absence of bright shades in his work was attributed to the Vrubel’s gloomy character, but after further examination experts now believe his melancholy color schemes are in fact the result of the artist’s color blindness. However, not everyone agrees with this.

Chizhikov, a contemporary artist holding the status of People's Artist of Russia, also suffers from color blindness. He is a long-time illustrator of popular Russian magazines Around The World and Murzilka, and responsible for Mishka the Bear - the mascot of the Summer Olympic Games in 1980 held in Moscow.

His colleague Leonid Sergeyev wrote: "Chizhikov is an inexhaustible humorist and a unique artist, he is unique type, he is a color blind man (his wife numbered colors for him), but he struggled with his illness for years and eventually won - he learned to feel color."