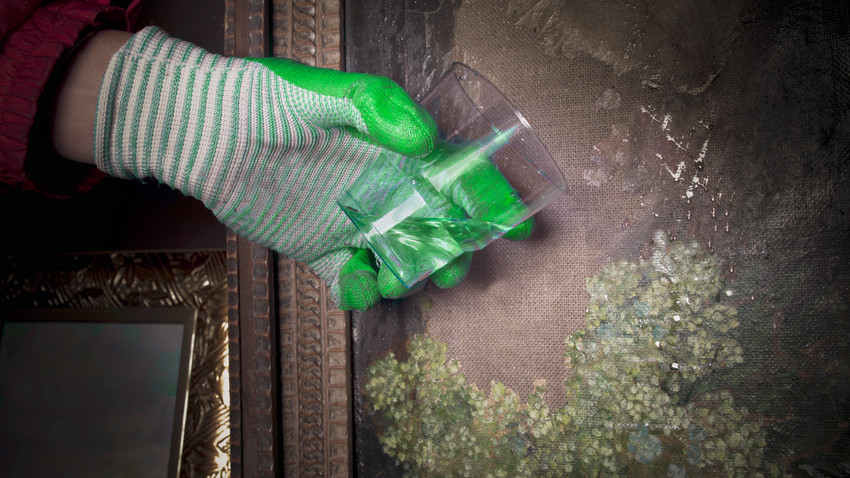 It's hard to create a masterpiece - but extremely easy to ruin it.

Legion Media
A drunken man slashed a valuable painting of Ivan the Terrible in May 2018. Unfortunately, it’s not unusual – in both the USSR and Russia, vandals repeatedly tried to destroy pieces of art kept in museums, including works by Rembrandt and Malevich.

“I beat it with a stanchion,” an arrested man calmly says in front of the camera on May 25, 2018. “I had 100 grams of vodka in the snack bar before and I never drink vodka… so it hit me hard.” That’s how a man from the city of Voronezh explained why he attacked painting by Ilya Repin in the Tretyakov Gallery, one of Moscow’s biggest museums.

The 1885 painting depicts the Russian tsar grieving over his son’s dead body after killing him accidentally, with blood on his hands (historians still argue if the story is true). The vandal punched three holes in the canvas.  And this accident is far from being the only case when a piece of art was attacked in Russia (or with the involvement of Russians).

1. Repin’s “Ivan the Terrible” – stabbed and 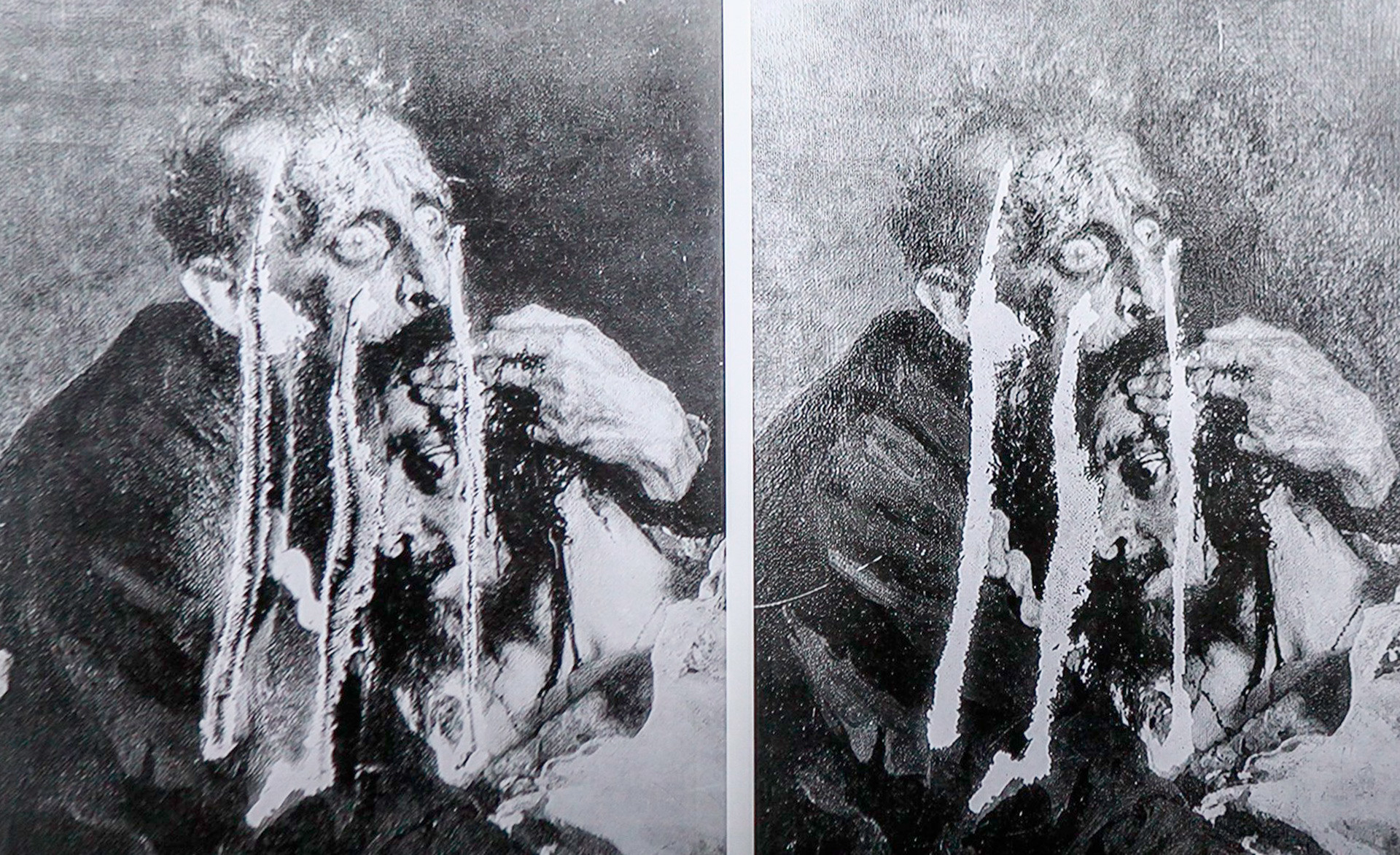 "Ivan the Terrible and his son Ivan" after the attack of 1913. It took years to recover the damage.

piece of art was troubled from the start – back in Tsarist days, many resented the grim painting. Kommersant’s art observer Dmitry Butkevich notes: “The public complained that the picture was making them dizzy and there were rumors that Ilya Repin had lost the use of his hand after painting it.”

In 1913, Abram Balashov, a young man who had shown no signs of mental disorder before, stabbed the painting with a knife, shouting: “Enough with the blood!” Repin - who was still alive at the time - worked with restorers for months to repair the damage, until its "wounds" were finally repaired. As we see, though, 100 years later little has changed and the art still can fall victim to a vandal. 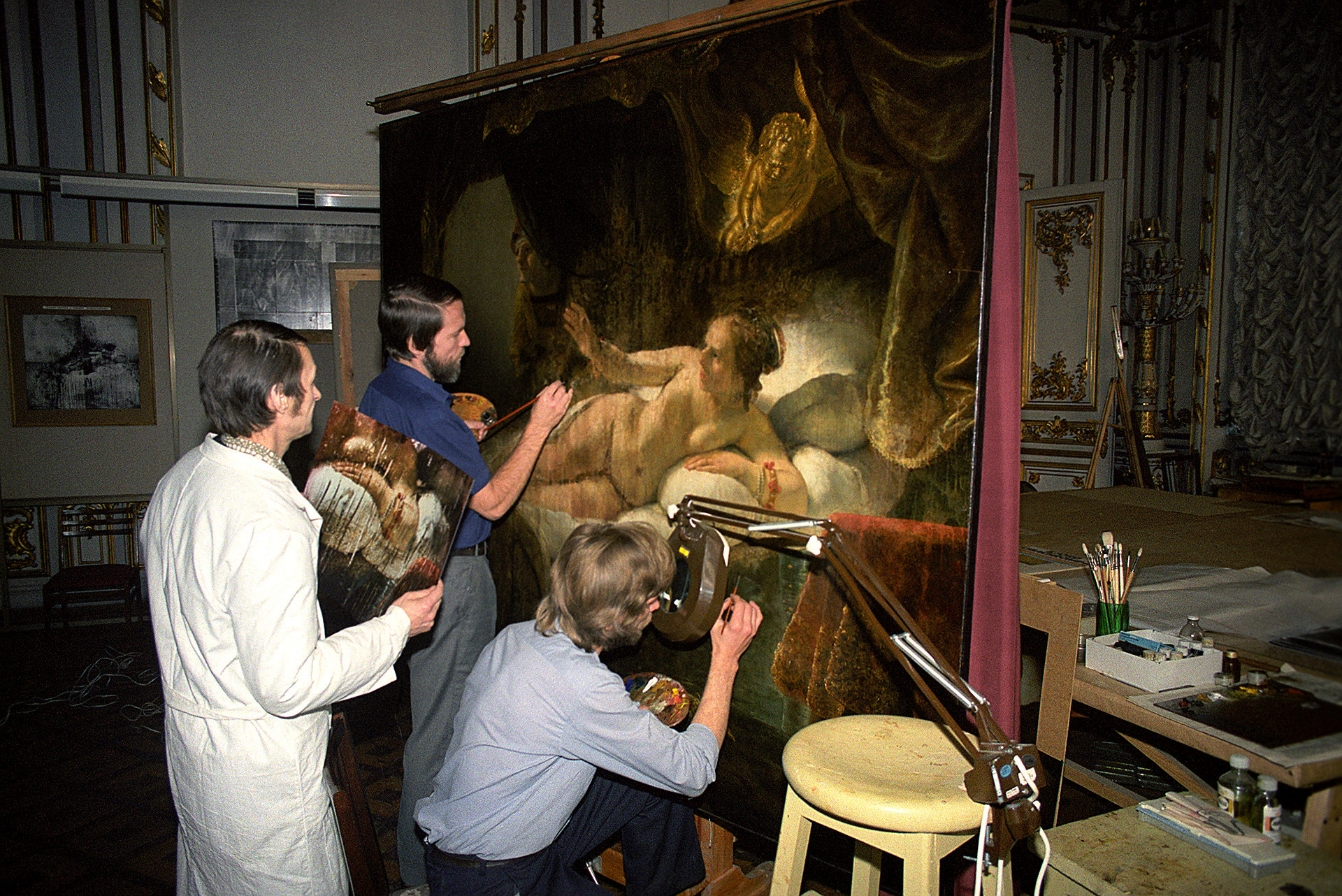 Restorers during their work on "Danae" after the attack in 1985.

Rembrandt’s piece of art was bought for Russia’s Hermitage by Catherine the Great and was peacefully displayed in the St. Petersburg museum until 1985. That year, Bronius Maigys, a Soviet citizen from Lithuania, threw sulfuric acid on it and cut the canvas with a knife.

His motives were dubious. At first, Maigys claimed that it was his way to champion Lithuania’s independence from the USSR but later he said he was generally against nude art. “According to the medics, he really had a psychic issue, which led to an obsession with fighting “filth”, Fontanka.ru explained.

Maigys spent eight years in a mental asylum. As for “Danaë”, it took 12 years to repair the damage: Russian restorers did the impossible, saving the piece of art, which can now be seen in the Hermitage – under armored glass, just to be on the safe side. 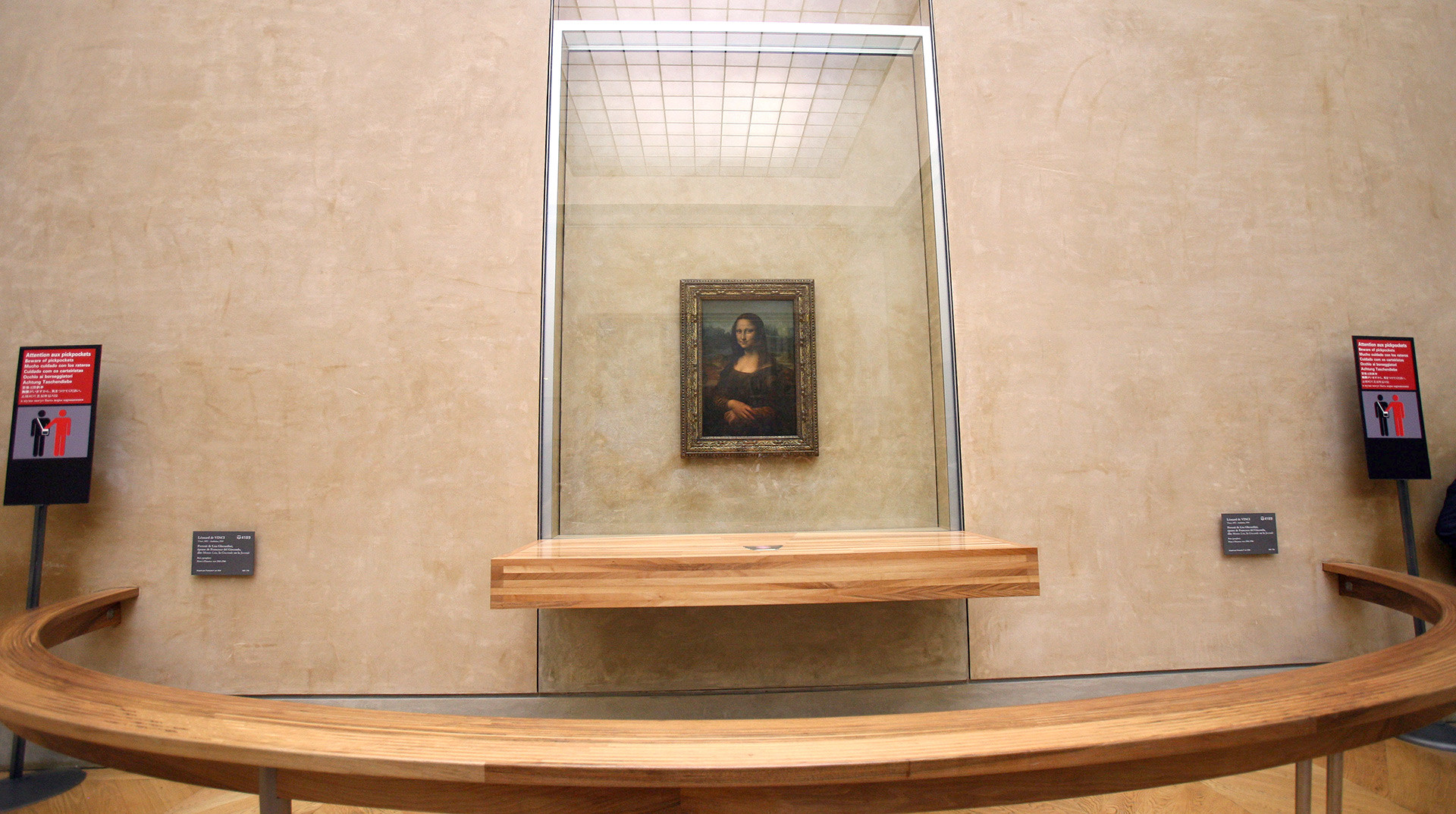 People can be dangerous when they’re upset and a Russian woman proved it well in 2009, while on a trip to the Louvre in Paris. She claimed that French authorities had denied her citizenship – and that’s why she… threw a ceramic mug at the famous painting by Leonardo da Vinci, “Mona Lisa”. (Not that it somehow helped her with citizenship, just for the hell of it).

It wasn’t the first or the most serious attempt to damage “Mona Lisa” – in 1956, one visitor threw acid and another other used a stone. So in the museum was well prepared: the mug didn’t break the armored glass and the Russian woman who threw it was detained in no time. After a couple of days, the authorities released her. 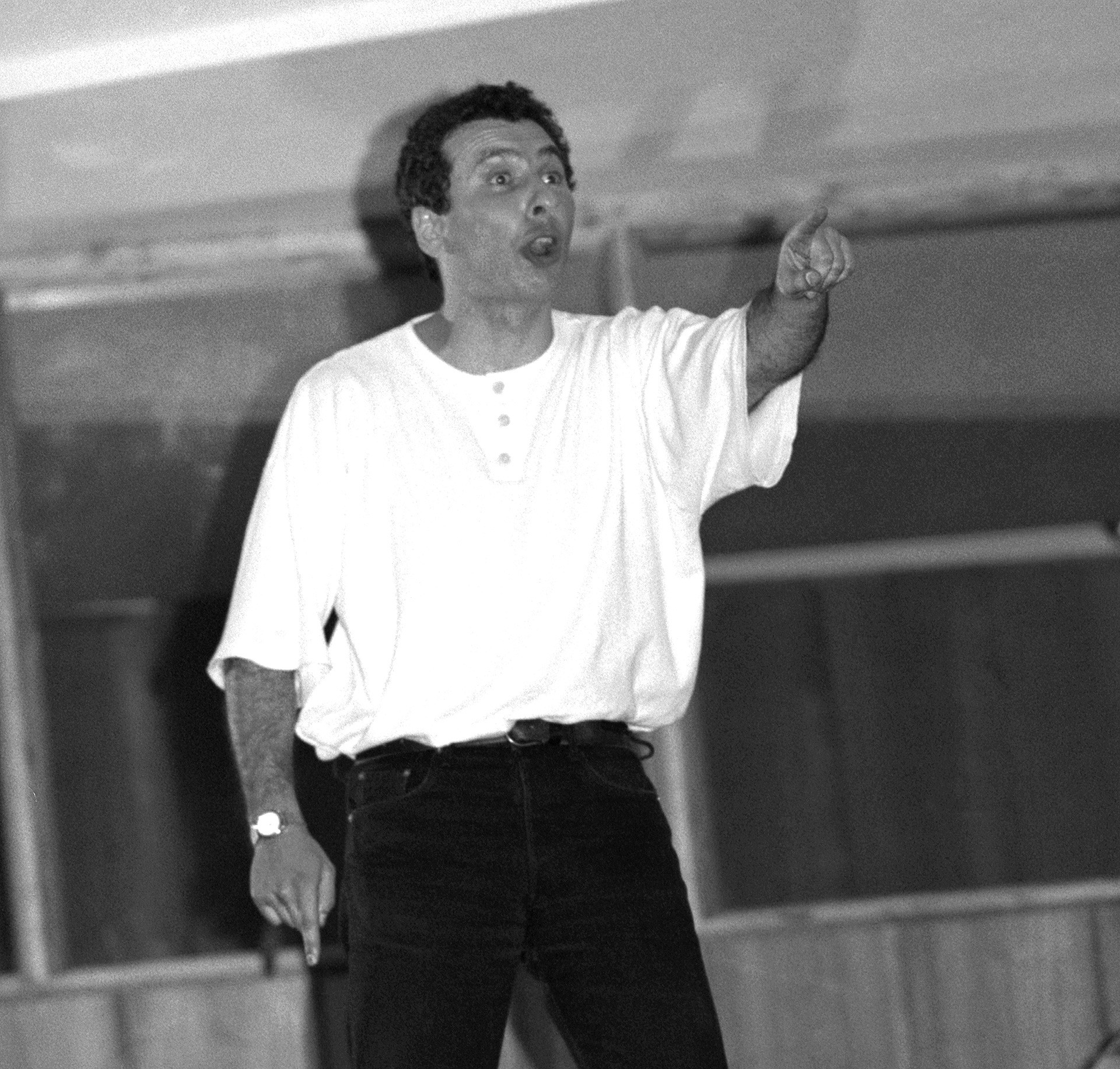 The incident involving the work by the iconic painter of the Russian 20th-century avant-garde occurred in 1997. Alexander Brener, a scandalous Russian performer, arrived in Amsterdam where he spray-painted Malevich’s “White Suprematist Cross” with a green dollar sign.

For Brener, it was a symbolic act, mocking an art world obsessed with money. “I crucified the dollar, like Jesus,” he wrote, ironically claiming the product (daubing the artwork with a dollar sign) was a joint work by Malevich and himself. A Dutch court, however, didn’t approve of such an act of art and sent Brener to prison and demanded compensation of around $10,000. It worked out more or less well for everyone – the green paint turned out to be easy to remove, and Brener found Dutch prison “liberal and rational”. 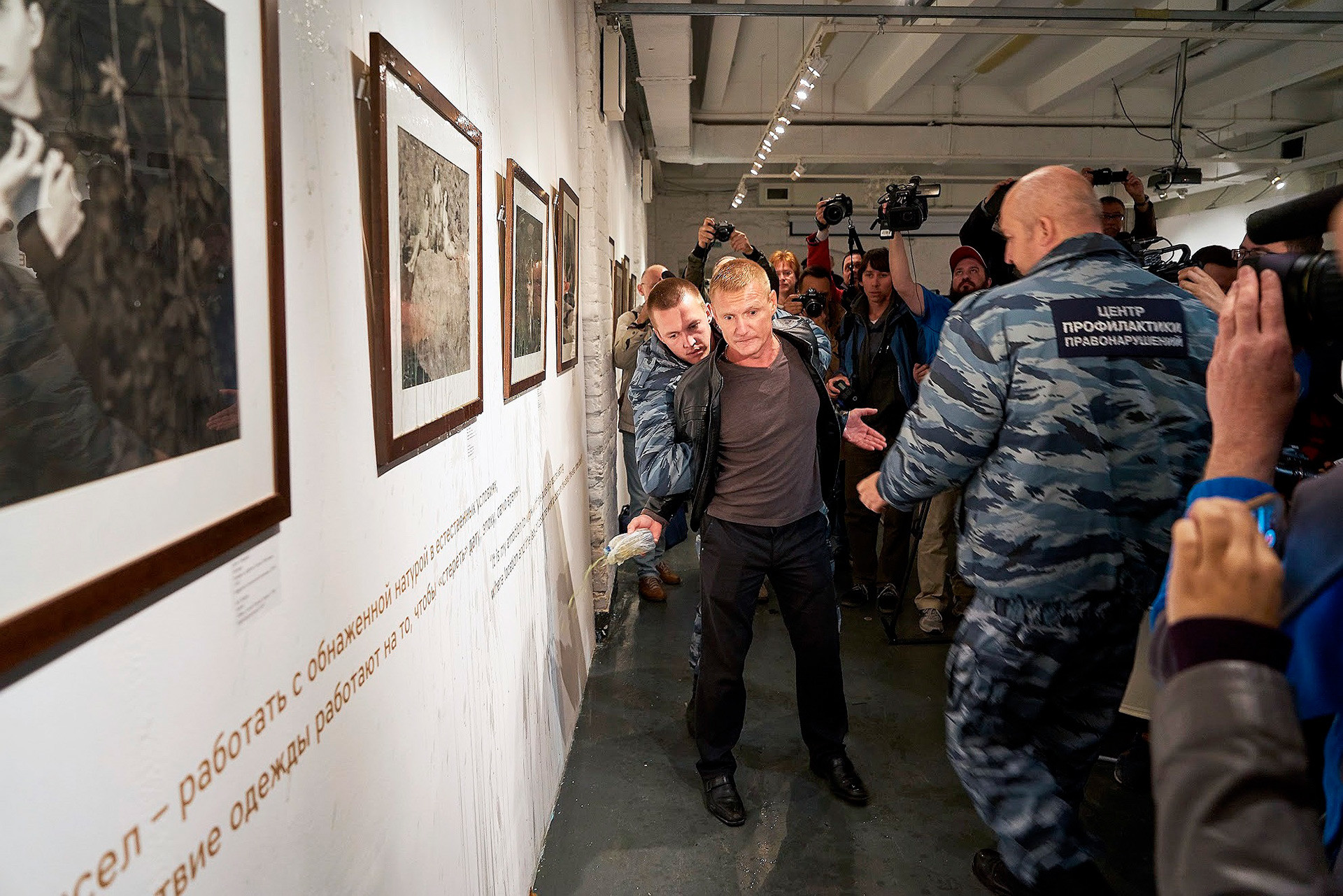 Alexander Pentrunko, a man who couldn't stand the exhibition of Jock Sturges' works.

When an exhibition of works by American photographer Jock Sturges, who often shoots nudist families and, consequently, naked children, was brought to Russian in the fall of 2016, it provoked outrage among several conservative politicians and movements who considered it “pornographic” or, at least, provocative.

The scandal reached its climax when in September 2016 Alexander threw some unknown liquid (perhaps urine, though Petrunko himself claimed it was “therapeutic mud”) at the photos by Sturges in the Moscow Lumiere Brothers Gallery. The intruder was detained for eight days and the unlucky exhibition was closed – but reopened in late 2017.

Here's everything else you might need to know about the unlucky and now-damaged painting by Ilya Repin.