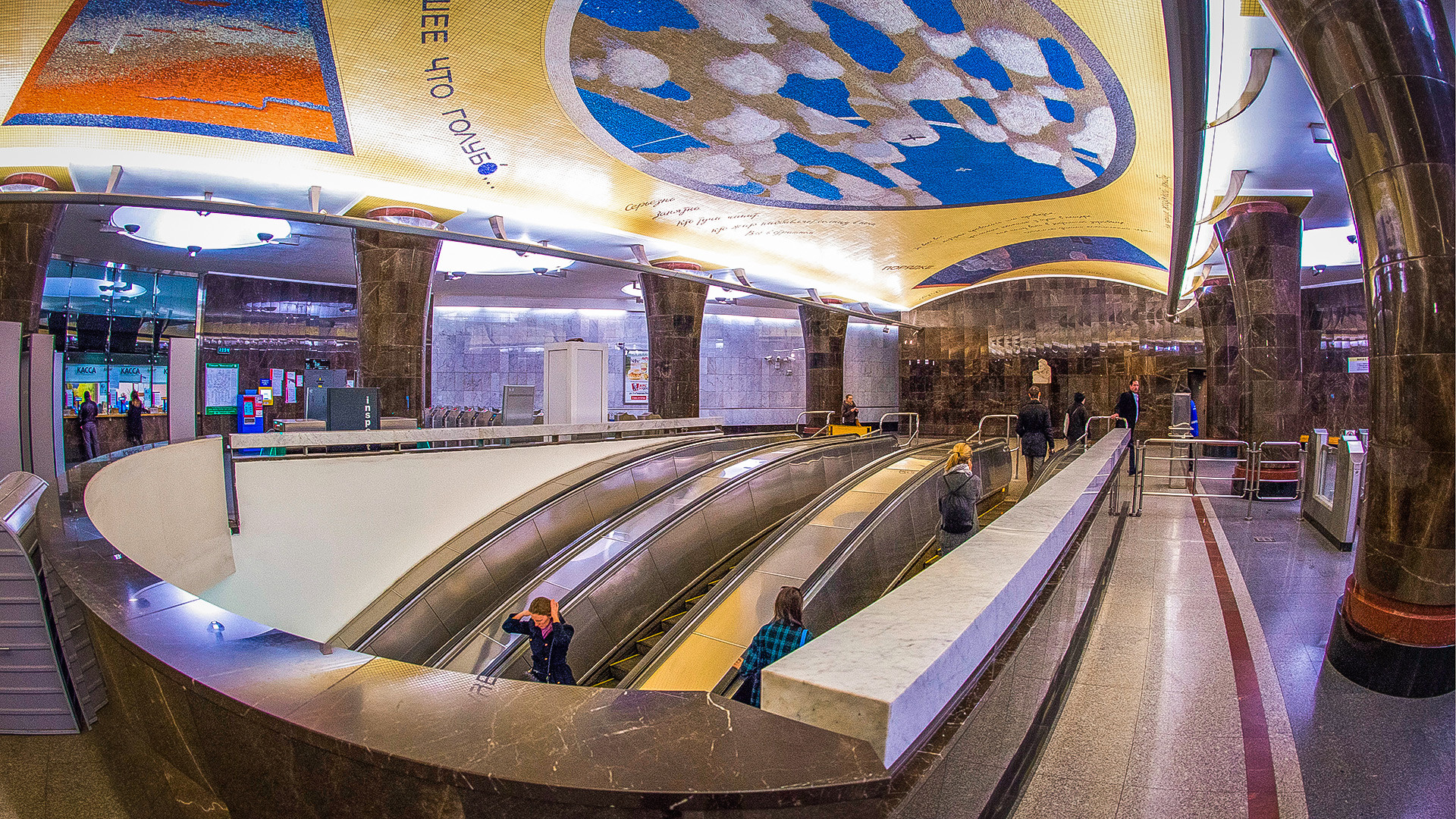 Nikolay Galkin/TASS
More than just a means of transportation, the capital’s metro is truly a masterpiece of art and architecture. You won’t find two stations that look alike. Here is our list of the ones that you must see. 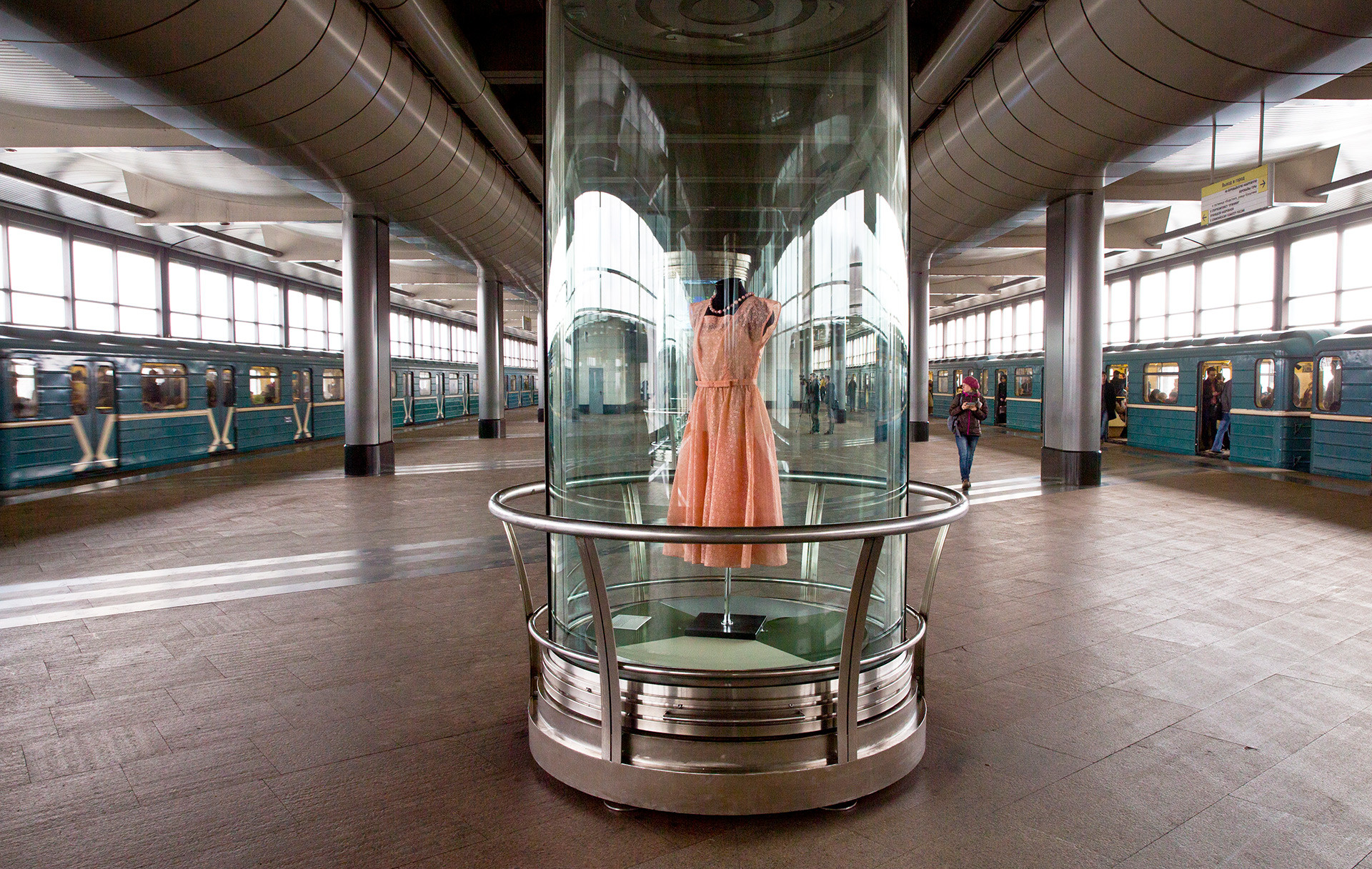 This station was built in 1959 on a bridge spanning the Moskva River – the first station of its kind in Russia. In the 1990s the station was renovated, and since 2010 it has been used as an exhibition hall for porcelain, dolls, animal sculptures and period costumes. If you are lucky, you might have the chance to see a seasonal exhibition dedicated to Russian achievements in sports or space exploration. 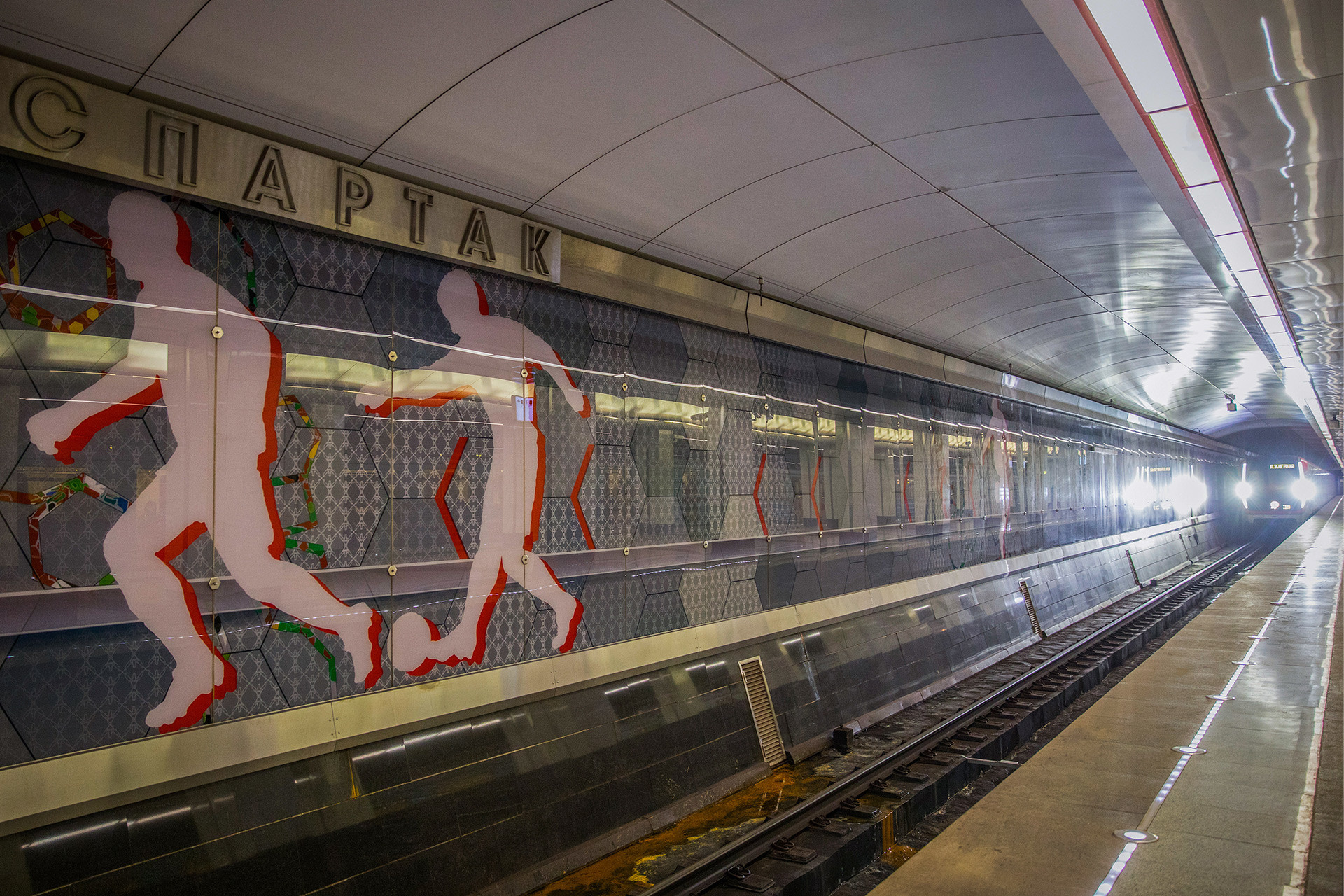 Construction began on this station in the 1970s, but the project was eventually frozen due to mismanagement. It opened on Aug. 27, 2014, the same day as the nearby stadium of Spartak Moscow. The station is decorated with soccer-themed panels, and the main colors are white and red – the colors of Spartak. 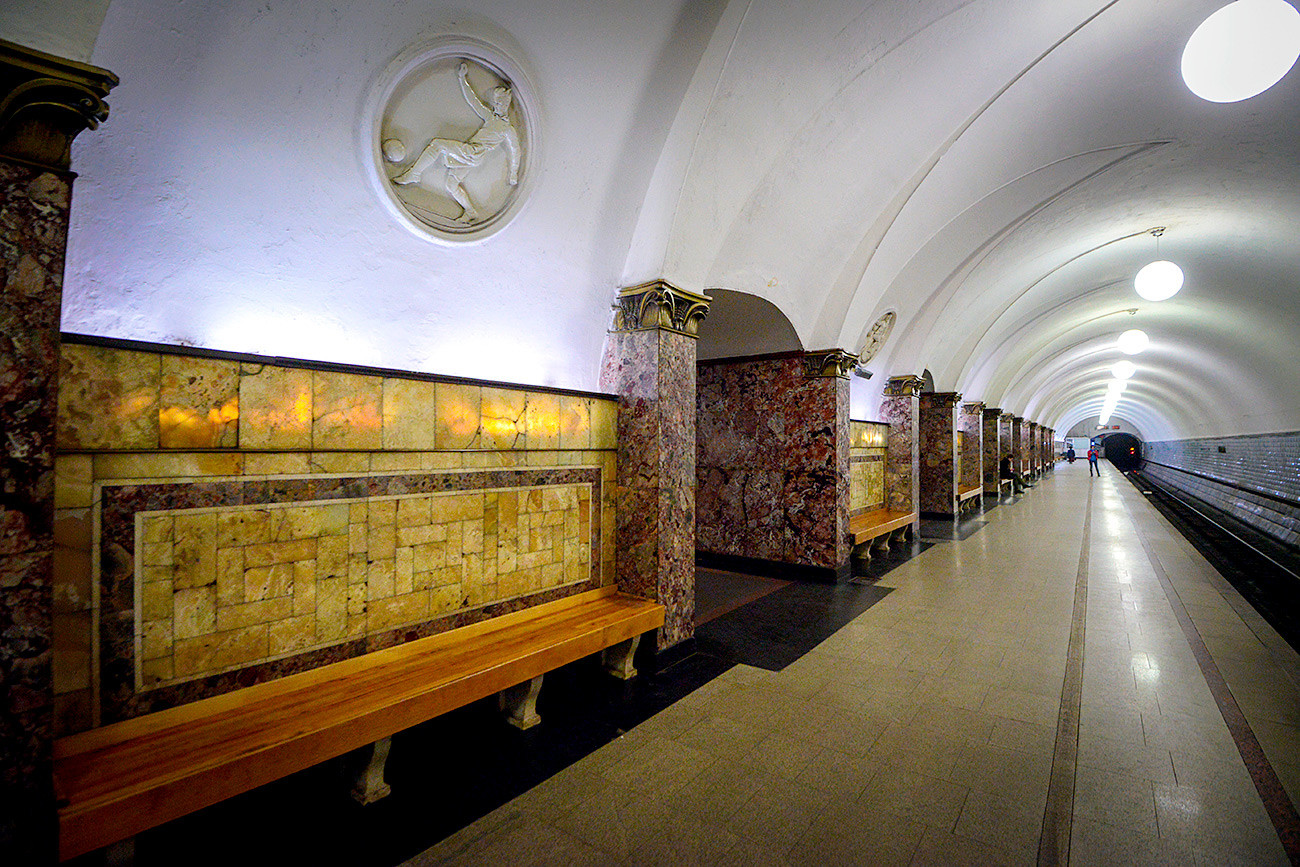 USSR’s focus on health and sports was the main theme in the decor of the Dinamo station, which is named after the nearby stadium. The design of the above-ground pavilion pays homage to Ancient Greece, the birthplace of the Olympic Games. Marble Corinthian columns are decorated with friezes and bas-reliefs depicting sports and competitions.

Underground, the decor is more restrained and includes seven types of marble. The walls are decorated with porcelain medallions that show scenes featuring different athletes. 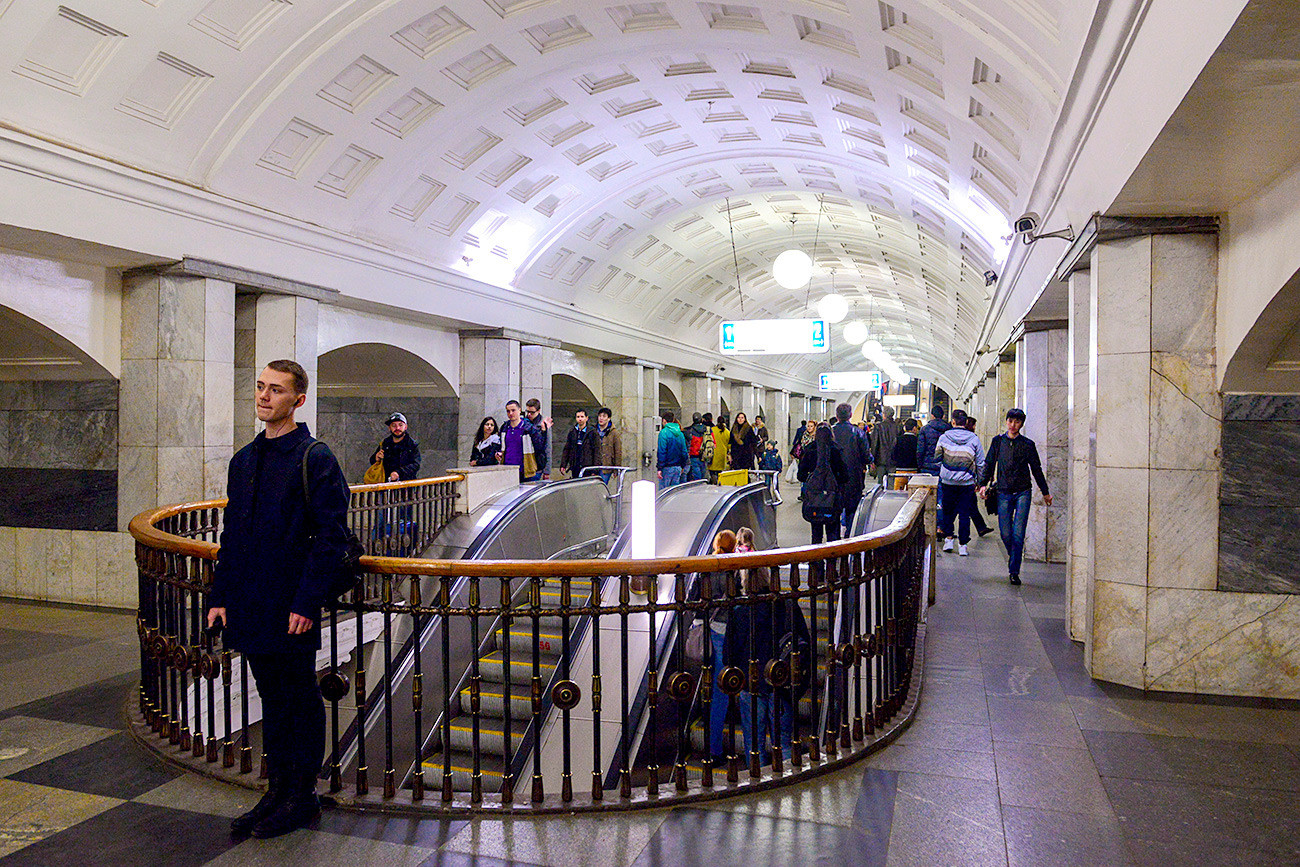 Opened in 1935, it was the world’s longest underground station at the time, but it has since lost that title. (The longest station is now Vorobyovy Gory.) Marble was used to Okhotny Ryad, and it covers the grey polyhedral columns, as well as the grey and white floor that is decorated as a chessboard. This station is the closest to Red Square and also leads to one of Moscow’s main downtown streets – Okhotny Ryad. 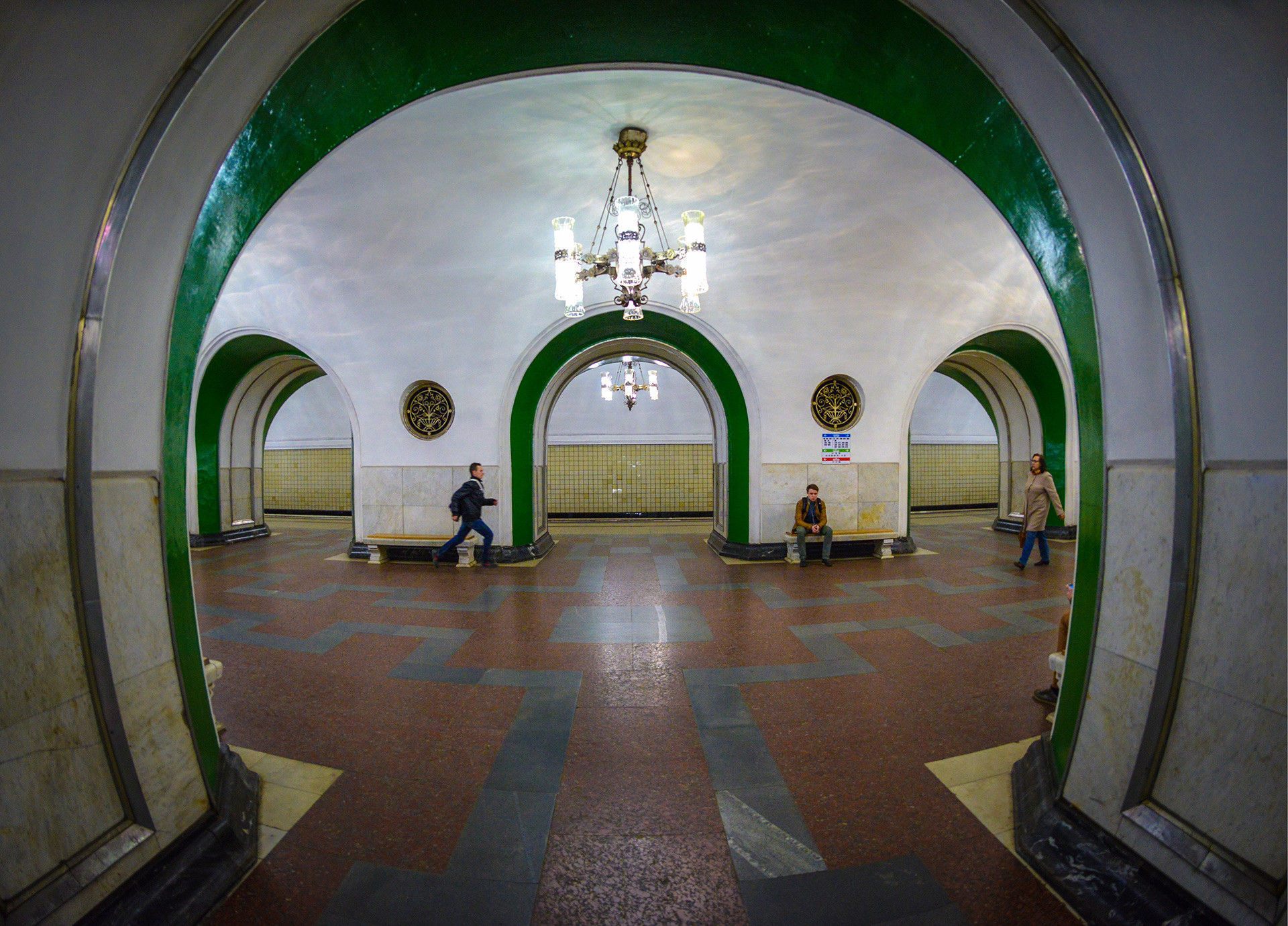 This station brings you to the famous Exhibition of Achievements of National Economy (VDNKh) that showed off the USSR’s greatest industrial successes. The multiple thematic pavilions have been renovated and offer a wide range of entertainment: museums, sports, aquarium restaurants. A huge ceramic in the Old Russian style of Gzhel was in fact only made in 1997. It depicts a market, as well as several Russian monasteries. 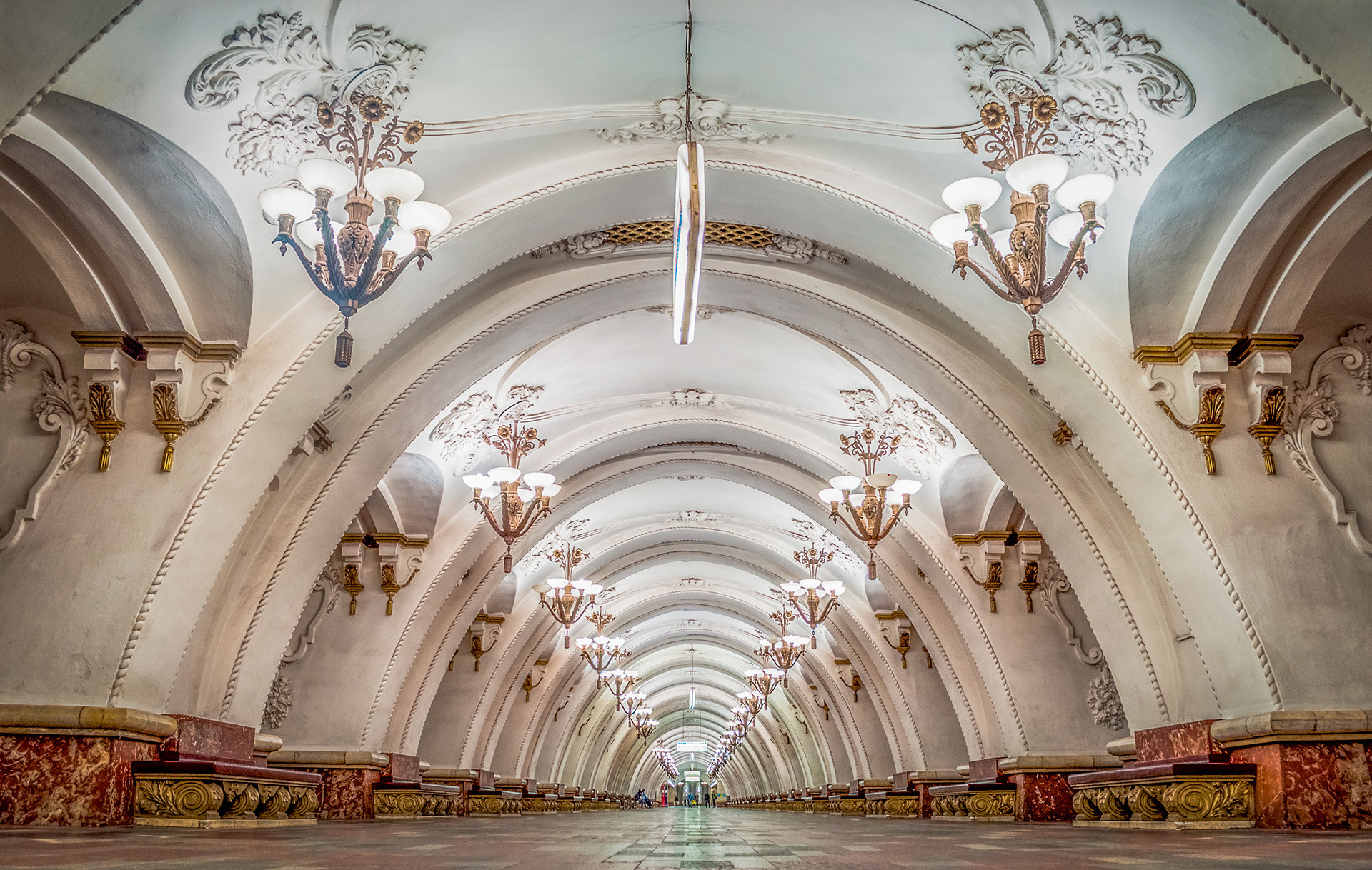 This station was designed by Leonid Polyakov, the architect who built one of the seven Stalinist skyscrapers. The station’s floor is made of multicolored granite slabs that form a distinctive carpet pattern, and its pillars are decorated with white ceramic bouquets. The chandeliers are made of gilded bronze. Since Arbatskaya is next to the Defense Ministry headquarters there is an urban legend that it was designed so that in case of a major war it could be quickly converted into an emergency bunker for military officials. 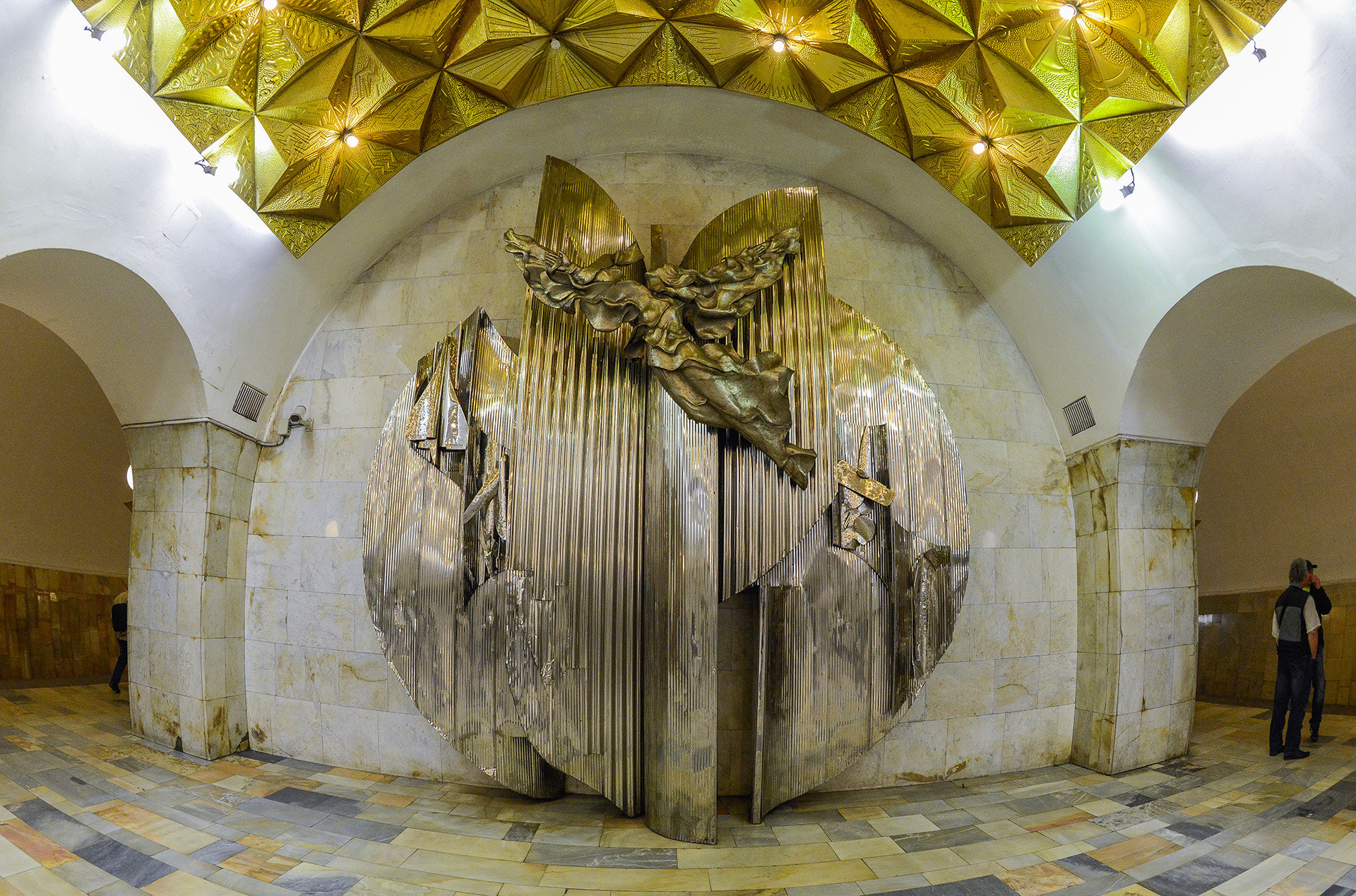 The decoration and name of this station are dedicated to aircraft engine designers. The metal sculpture at the end of the hall shows Icarus flying over ascending airflows.

The station’s roof is styled to look like a magic carpet, consisting of numerous gold anodized pyramids with two types of images: sun rays and night stars. 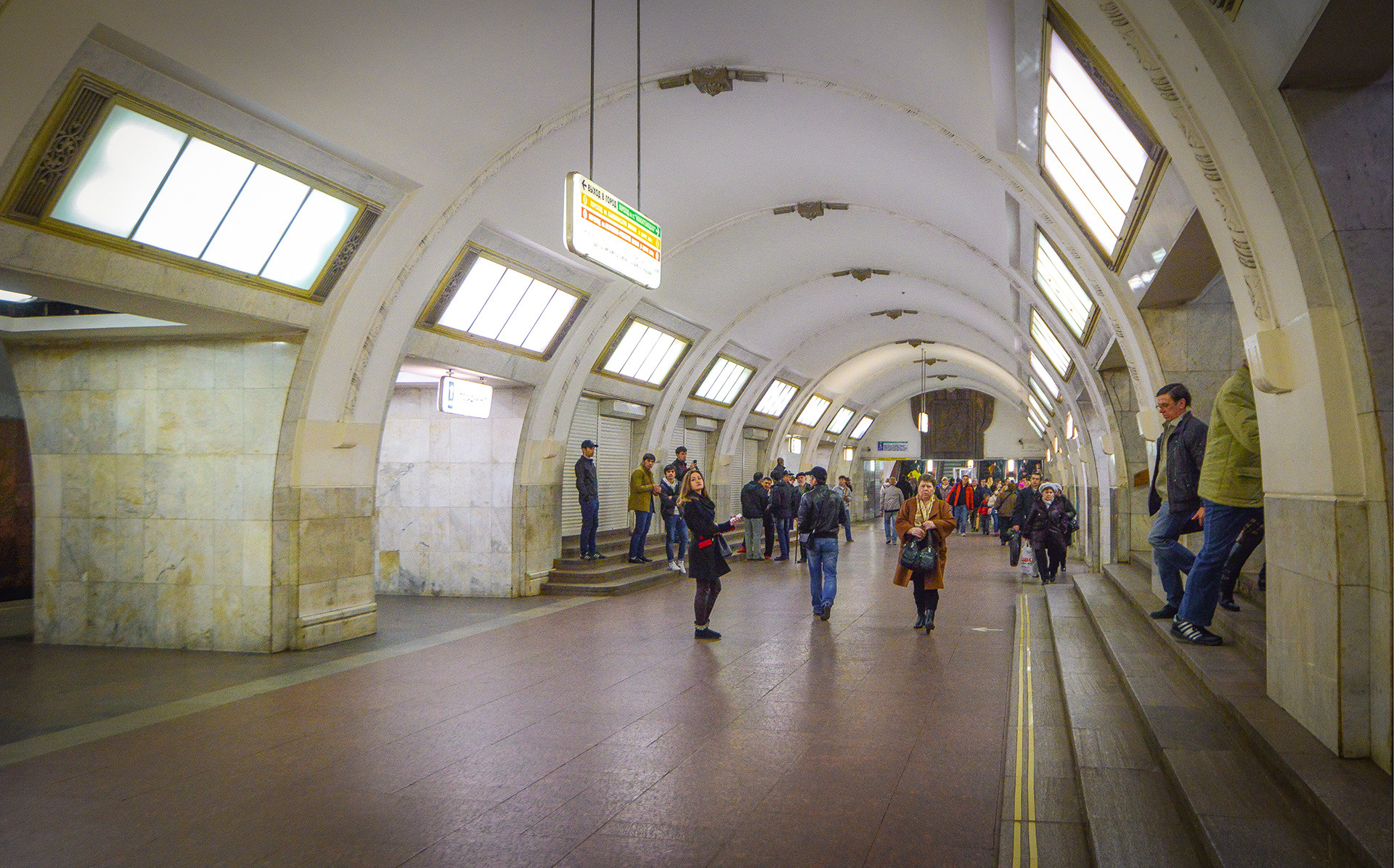 This station leads to the famous State Tretyakov Gallery, the foremost repository of Russian fine art in the world. The station walls are decorated with bronze bas-reliefs that celebrate Russian artists, sculptors and icon painters. Above the on the way to the you’ll see a large image of the Tretyakov Gallery. 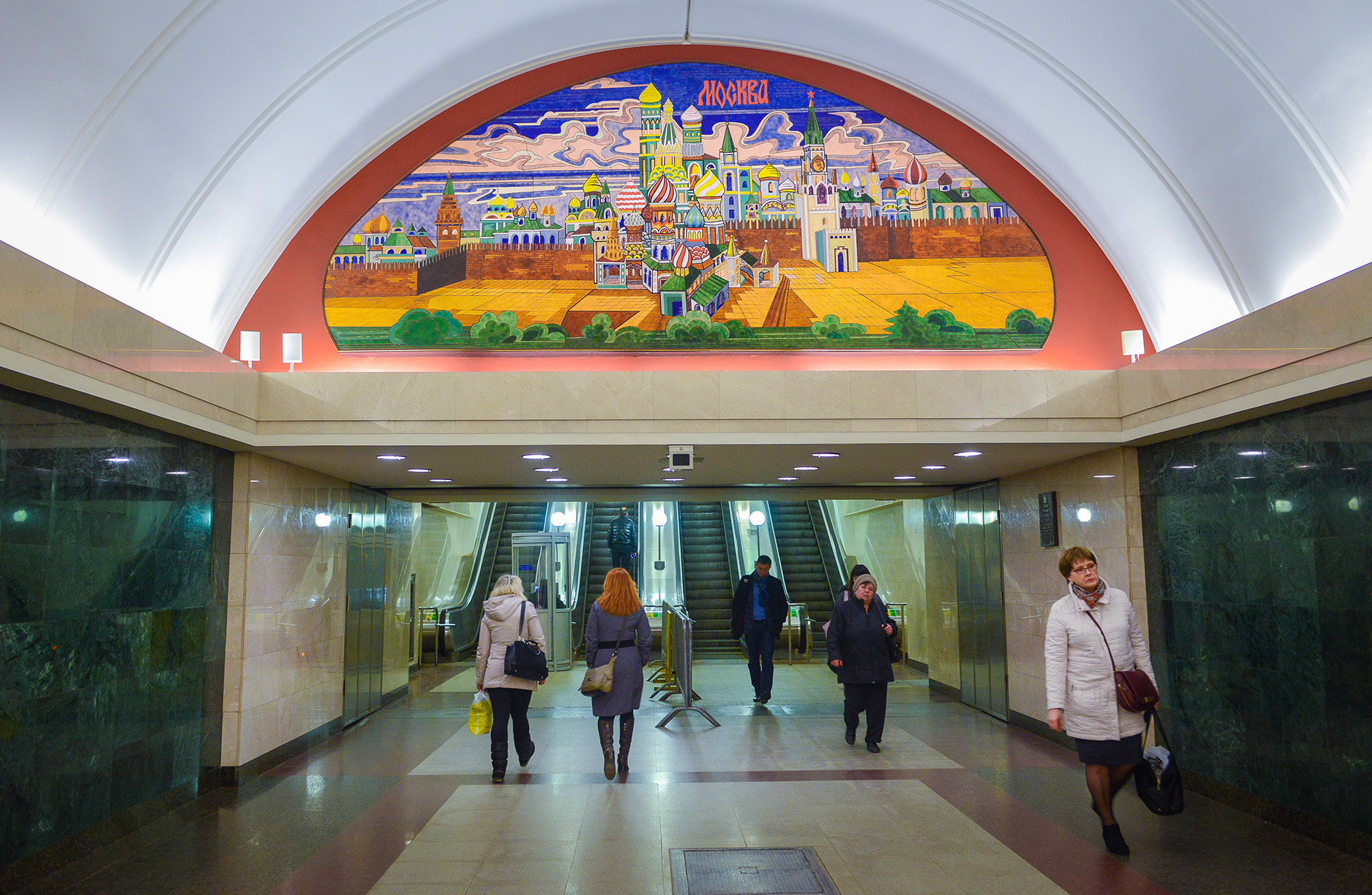 This is the closest station to one of the oldest circuses in the capital - the Moscow Circus on Tsvetnoy Boulevard, and it was designed appropriately. For instance, in the you’ll see a huge colorful illuminated stained-glass window showing сircus performers. 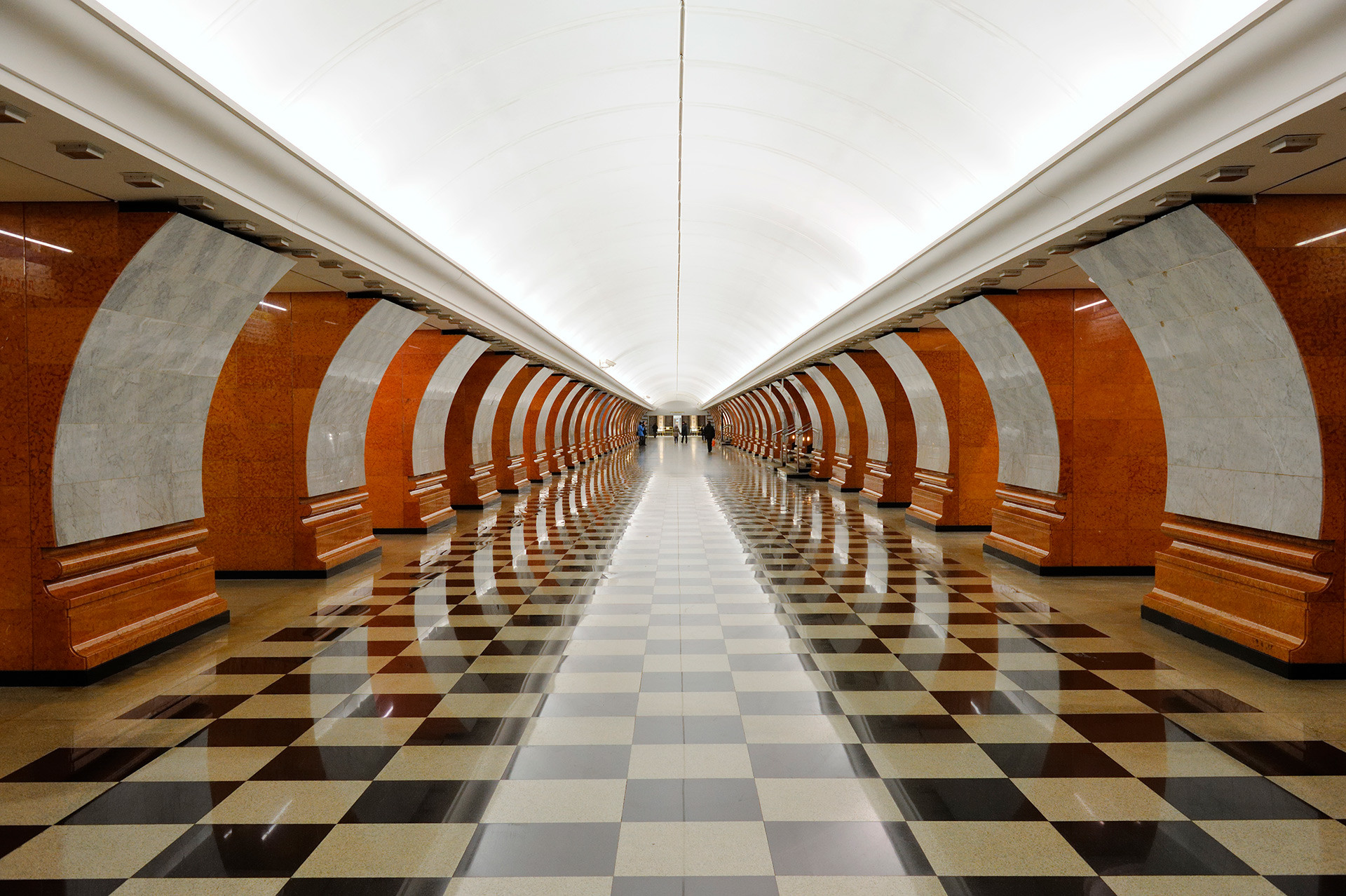 The interior is an ode to the great victories of the Russian people, including the War of 1812 against Napoleon and World War II. Designed by the famous Soviet and Russian artist, Zurab Tsereteli, the southern and northern halls each celebrate the two victories. 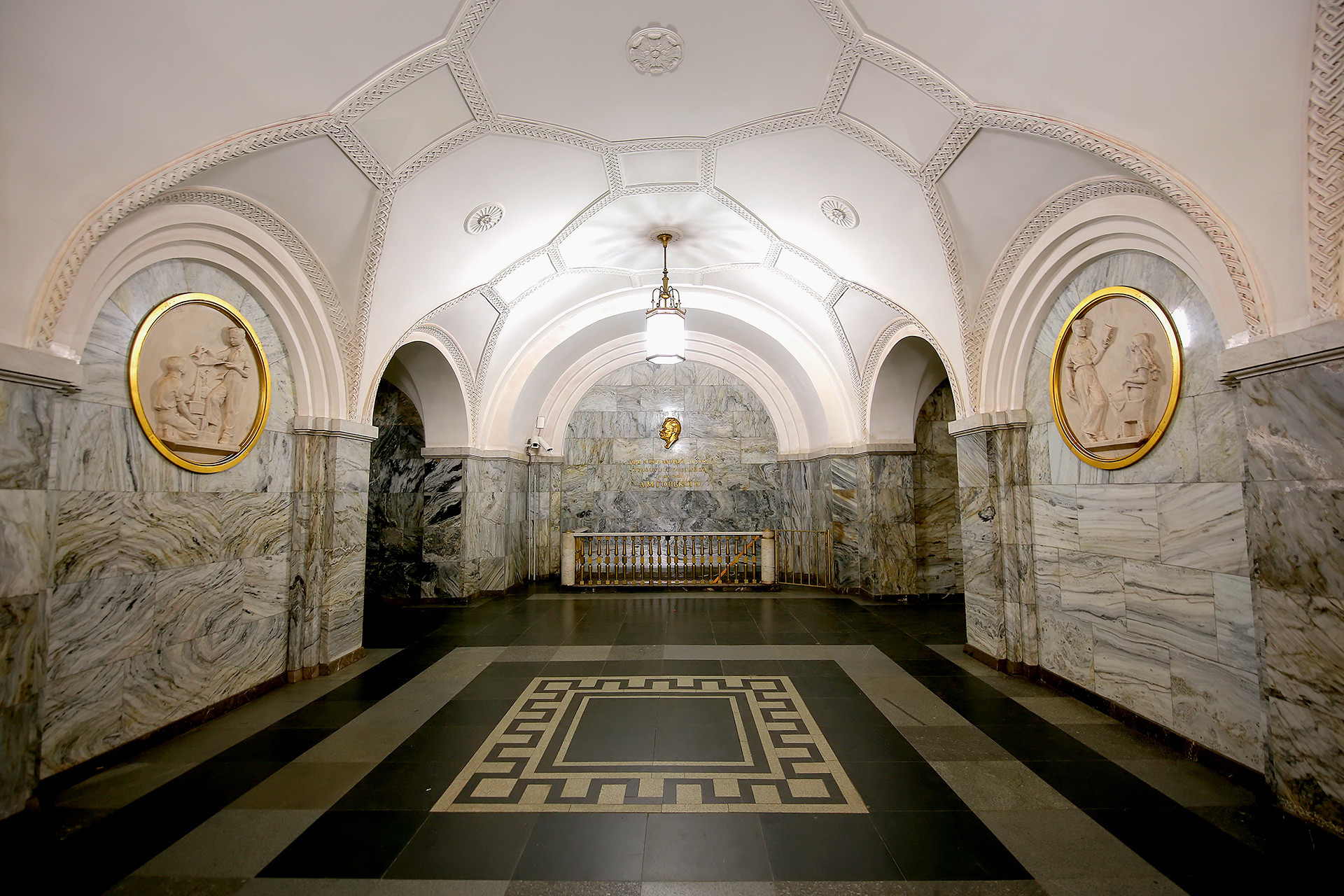 This station leads to Moscow’s main park, Gorky Park, and includes five types of marble, from veined light gray to black. Other features include chandeliers and marble bas-reliefs that depict the labor and leisure activities of the Soviet people, as well as activities at Gorky Park, including flying model planes, dancing and playing football and tennis. 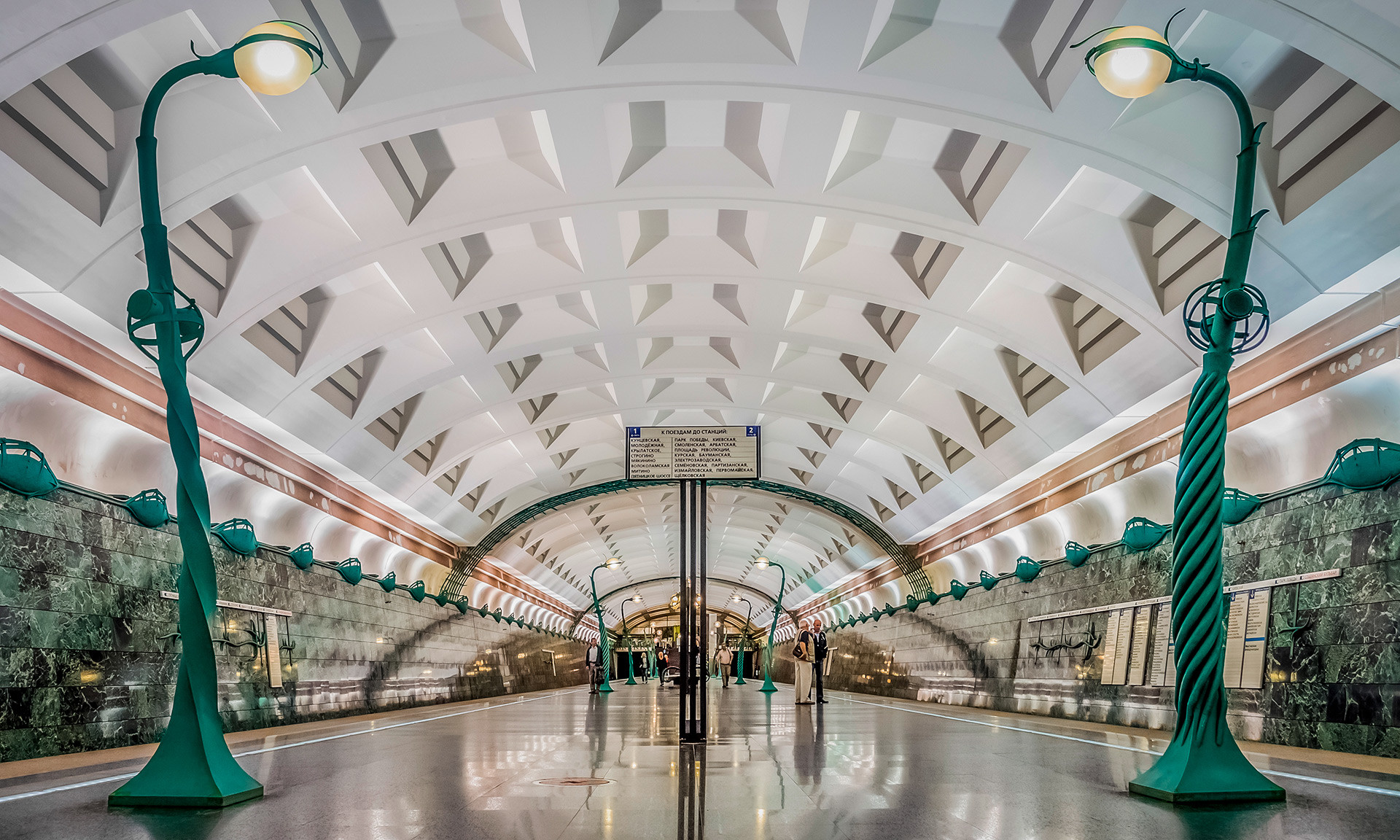 This modern station was opened in 2008. Nevertheless, it follows the aesthetic standards set by older stations. Inspired by the works of famous French architect Hector Guimard, Slavyansky Bulvar is peculiarly decorated with metal trees, branches leaves. It’s clearly reminiscent of the sophisticated metro in Paris. 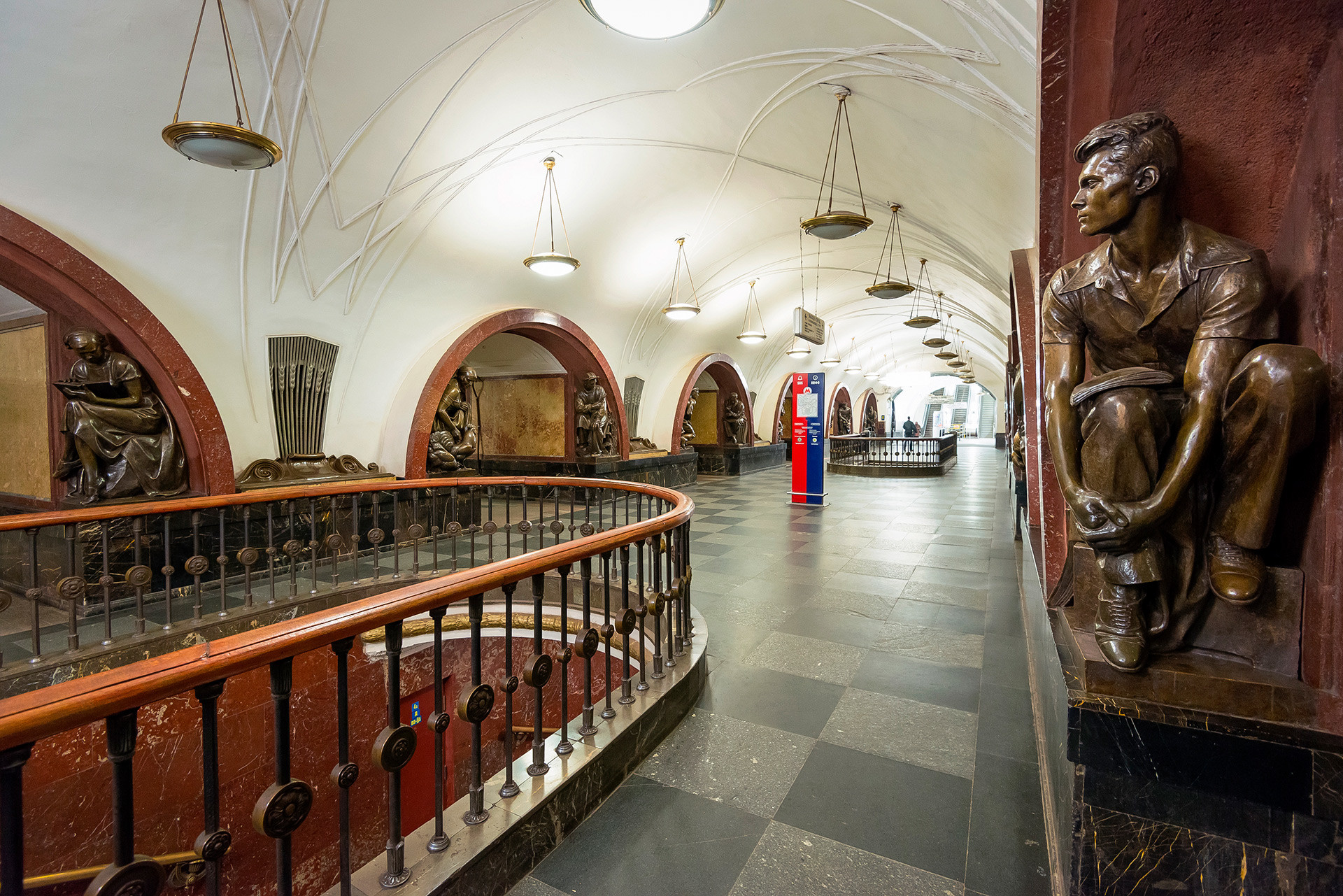 Ploschad Revolutsii is devoted to the Bolshevik Revolution of and has 76 bronze statues that depict its main participants: soldiers, peasants, sailors, workers, engineers, students and many others. Due to the limited space in the alcoves where the statues reside, many of the figures are either sitting down, or crouched. Don’t forget to rub a dog’s nose for good luck! 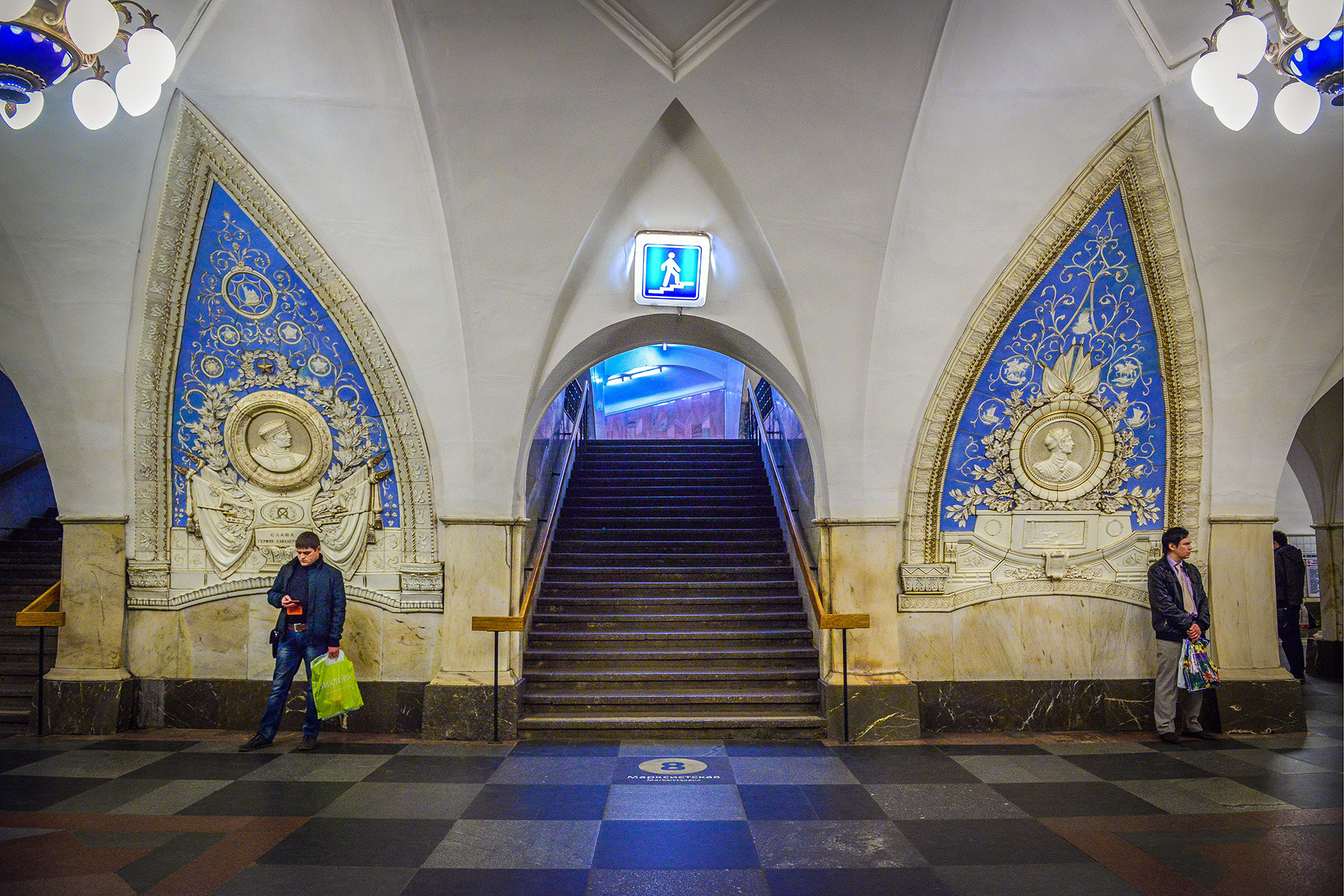 Medieval architecture is the main theme of this station's design. Intersections of the arches create a kind of cross vault similar to those found in medieval Russian boyar chambers. The pillars are decorated with majolica panels in the style of the studio of Andrea Robbia, the famous Florentine sculptor.

Instead of images of the Madonna on the walls, you’ll find profiles of heroes of the Soviet Army, such as sailors, tank operators pilots, who bask in glory with victorious banners and bayonets that are painted with enamel and gilding. 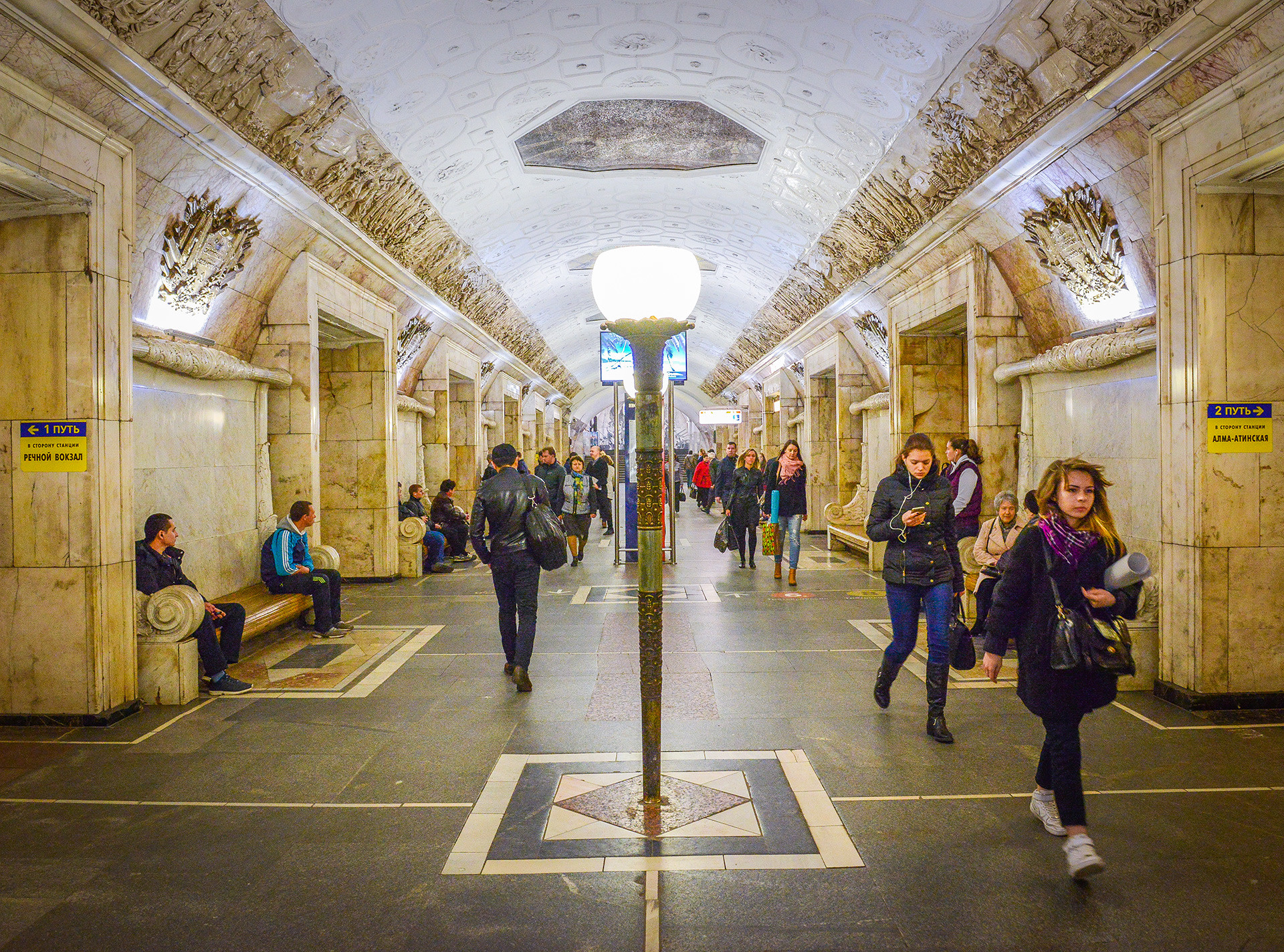 Despite being built during World War II, the station is luxuriously decorated. Enormous marble benches with Renaissance-style sculpted armrests line the platforms. Above this are bronze decorative medallions with pictures of flags, shields guns, as well as portraits of Russian military commanders.

The ceiling in the middle of the hall is decorated with giant brass chandeliers and six mosaics with motifs designed by Alexander Deineka that depict daily life in the USSR. 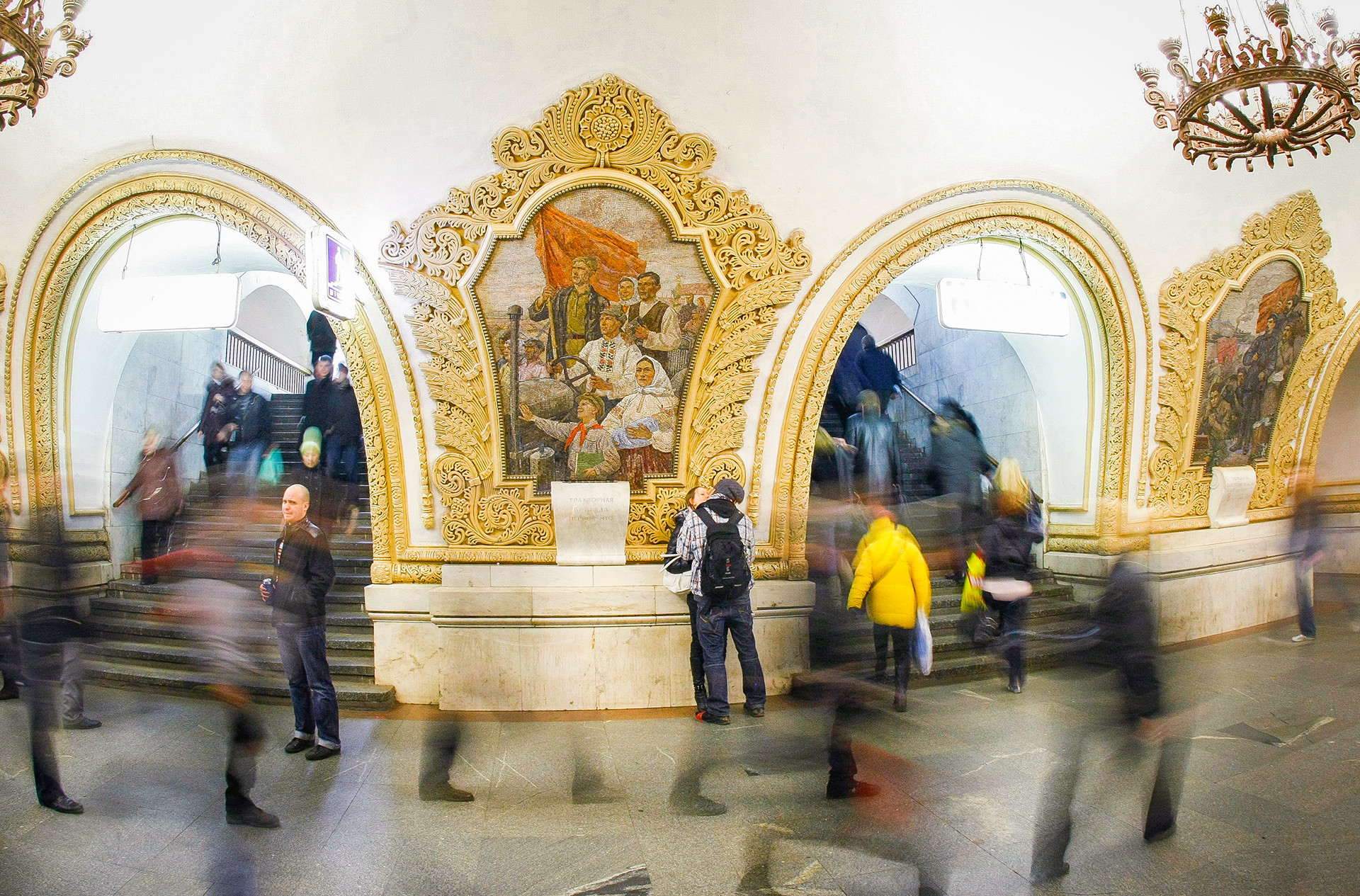 This station on the Circle Line was built under the personal supervision of Soviet leader Nikita Khrushchev. With its elegant decor and multiple mosaics, Khrushchev wanted to pay tribute to his Ukrainian homeland. Following the station’s opening, the Soviet leader fought excesses in architecture, thereby ensuring the unrivaled glory of this underground “palace.” The lobby, like those at other stations, is decorated with marble and granite, and the columns are decorated with 18 mosaic panels in the Florentine tradition. The bas-relief panels tell the history of relations between Russia and Ukraine, from the time of the Pereyaslav Rada in 1654 when the Cossacks swore an oath to the Russian Tsar, to the October Revolution in 1917. 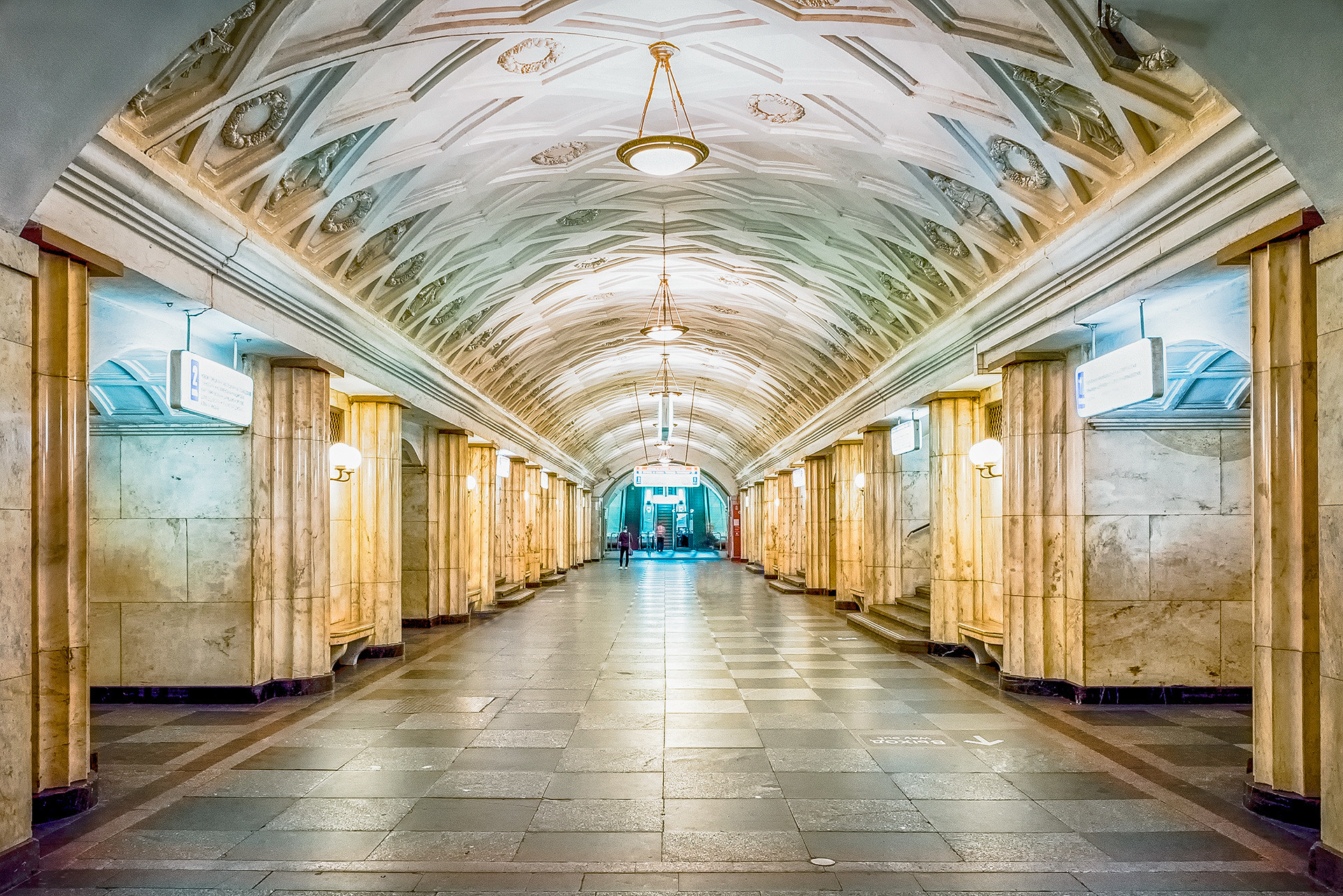 This station leads to the Bolshoi Theater, Red Square the Kremlin, so it’s no surprise that its rich ornamentation was designed to impress both Russians and foreigners. is decorated with giant porcelain reliefs that depict the dances and music of the peoples of the USSR. These dancing figures and musicians, who are wearing traditional costumes, represent just seven of the Soviet republics – Georgia, Armenia, Kazakhstan, Uzbekistan, Ukraine, Belarus Russia. 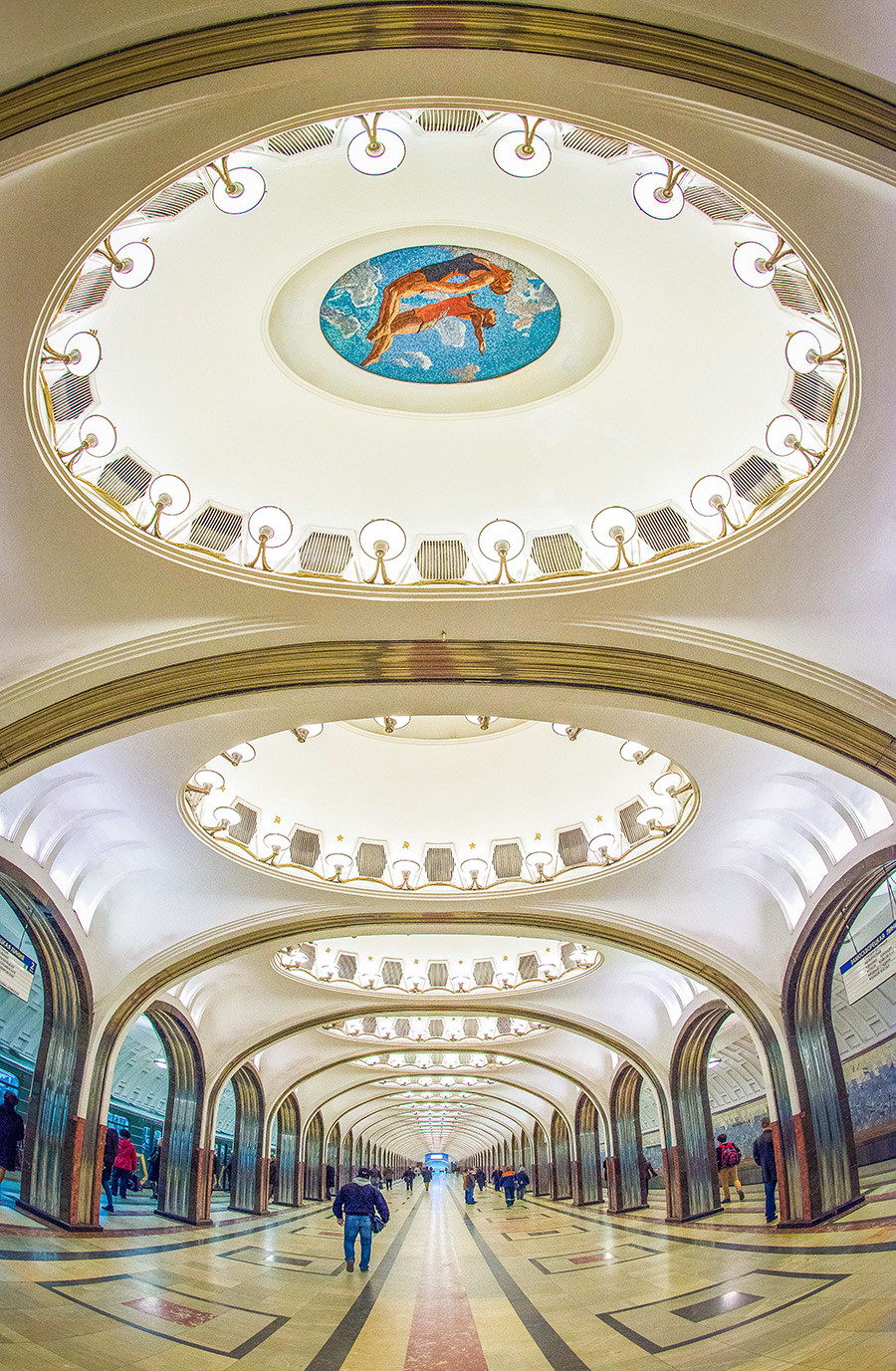 This Art Deco masterpiece opened in 1938 and was designed by architect Alexey Dushkin. During the most modern techniques of the time were used. Instead of heavy pillars, there are high, slender columns made of aircraft steel that create the feeling of a large hall. There are also numerous mosaics based on the sketches of Alexander Deineka. Their theme is “24 Hours in the Land of the Soviets,” and they depict popular Soviet themes with titles such as Two Airplanes, Grain Harvesting, Airship over the Spassky Tower, and more. 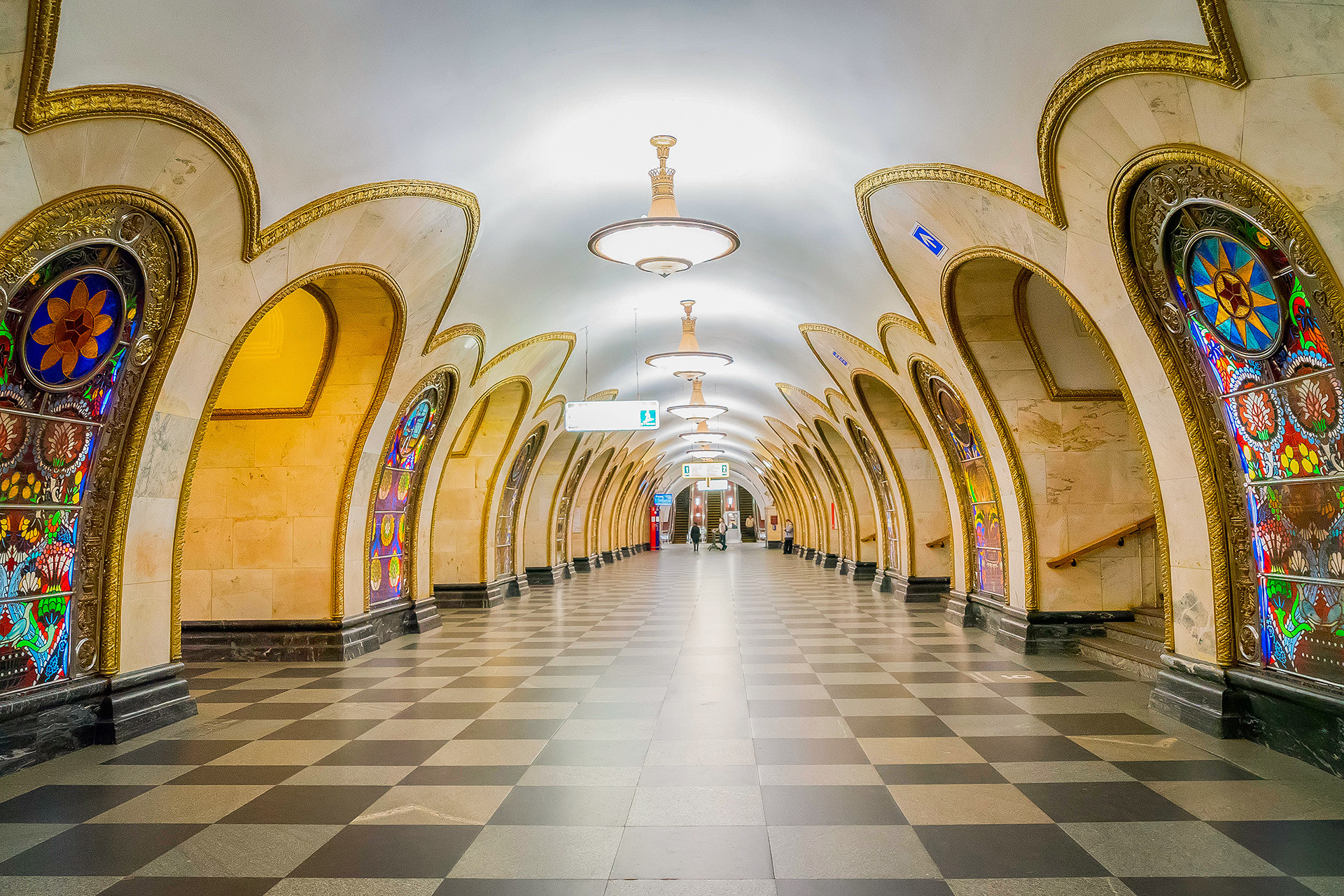 This station is best known for its 32 stained-glass panels designed by artist Pavel Korin. There is an urban legend that before its opening the architects were afraid that the station would resemble a Catholic church. Today, Muscovites liken it to an incredible underwater world.

Six of the stained-glass panels depict people from different professions including a musician, an agronomist an architect. The remaining 26 panels contain intricate geometric patterns and stars. 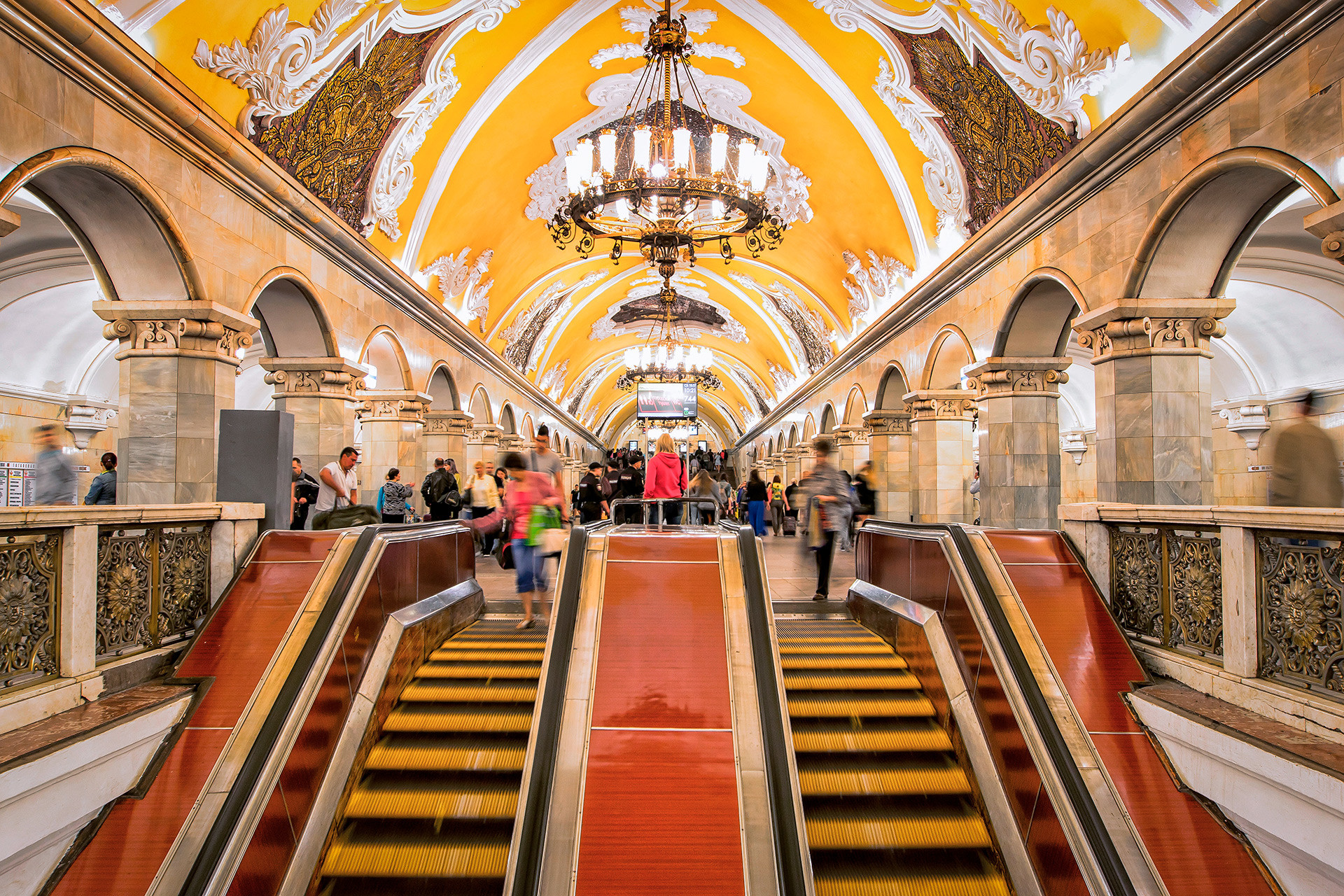 This station represents the high point of the Stalinist Empire style, with elegant bronze chandeliers, marble arcades and monumental mosaics made from smalt.

Today, the station is adorned with eight mosaic panels designed in the style of ancient church architecture. They depict famous Russian warriors, commanders, and revolutionary leader Vladimir Lenin, who is depicted giving a speech on Red Square.