What if Leo Tolstoy wrote a contemporary bestseller?

Culture
Alexandra Guzeva
Tolstoy’s books are verbose and moralize heavily. Russia's most prolific author was born 190 years ago on Sept. 9, and we started wondering what scenes from today’s popular books would be like if written by Tolstoy. 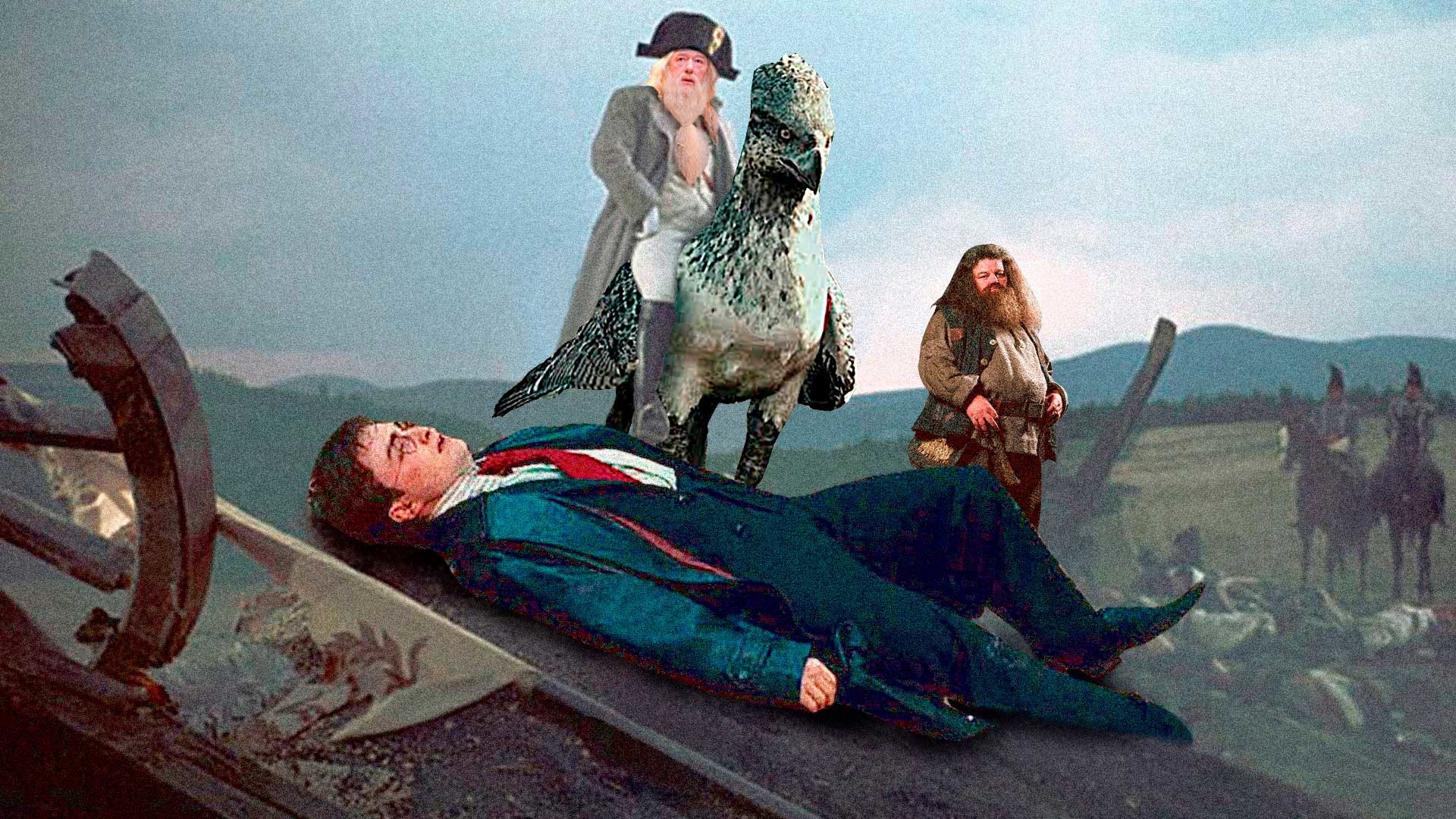 On the Quidditch field, where he had fallen with the broomstick in his hand, lay Harry Potter bleeding profusely.

He listened and heard the sound of approaching hippogriffs and voices. He opened his eyes. Above him again was the same lofty sky with clouds that had risen and were floating still higher, and between them gleamed blue infinity.

Dumbledore, accompanied by Hagrid, was riding over the field and had given final orders to remove quaffles and broomsticks left on the field.

“That’s all Voldemort’s tricks!” said Dumbledore as he gazed at Harry.

Potter understood that this was said of him but he heard the words as he might have heard the buzzing of a fly.

Not only did they not interest him, but he took no notice of them and at once forgot.

His scar was burning, he felt himself bleeding to death, and he saw above him the remote, lofty and everlasting sky. He knew it was Dumbledore, but at that moment even Dumbledore seemed to him such a small, insignificant creature compared with what was passing now between himself and that lofty infinite sky with the clouds flying over it. He collected all his strength, to stir and utter a sound. He feebly moved his leg and uttered a weak, sickly groan which aroused his own pity.

“Ah! He is alive,” said Dumbledore. “Lift this young man up and carry him to the St. Mungo's Hospital.”

Girl Who Threw Herself Under the Train 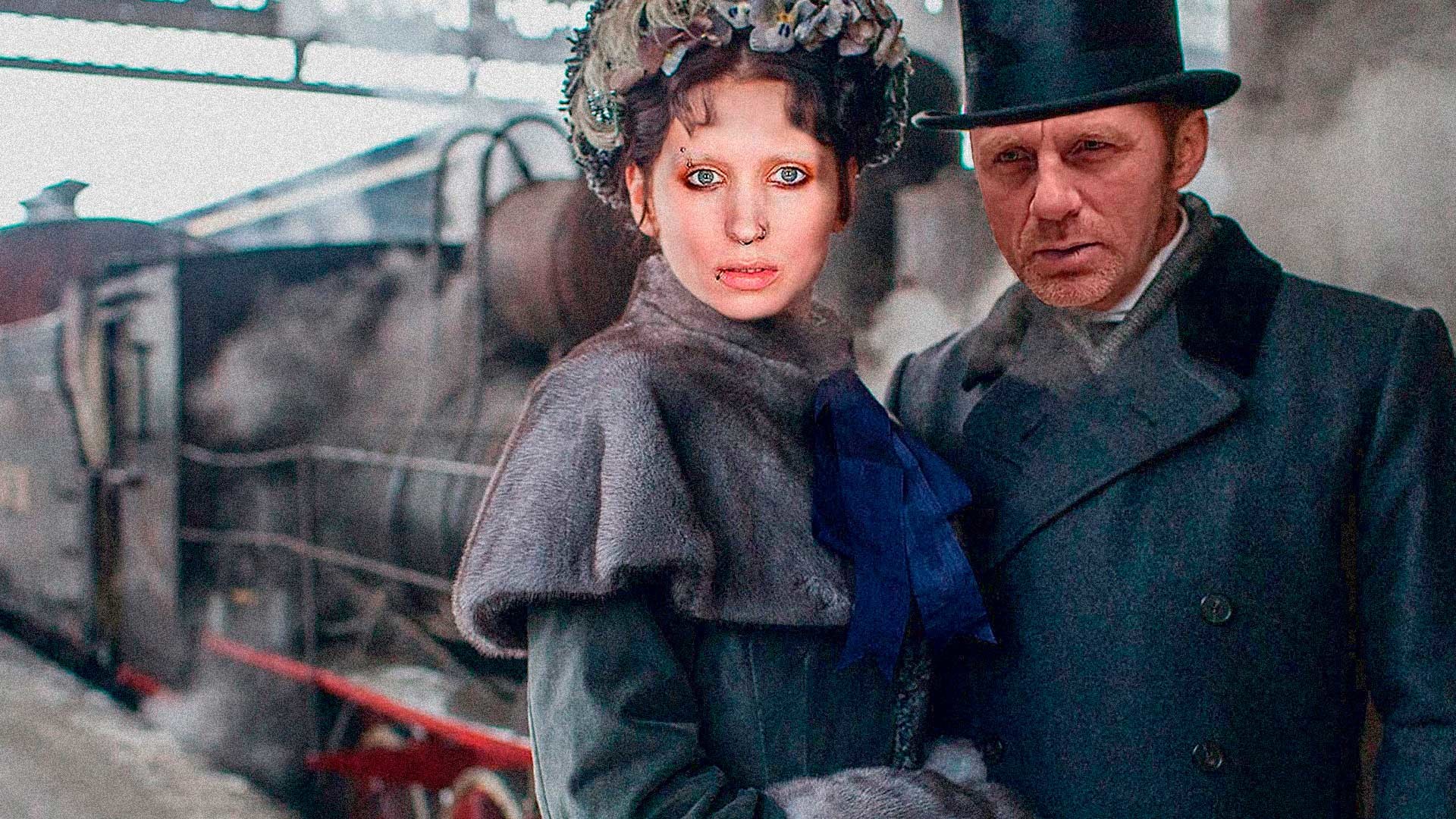 Mikael Blomkvist stepped out of the train, and as soon as his lover Erika Berger had reached him, with a gesture that struck Lisbeth Salander by its decision and its grace, he flung her left arm around his neck, drew her rapidly to her, and kissed her warmly.

Lisbeth gazed, never taking her eyes from her, and smiled, she could not have said why.

“She’s very sweet, isn’t she?” said Lisbeth. “We’ve been traveling together and talking all the way.”

“Good-bye, my sweetheart,” Mikael said. “Let me have a kiss of your pretty face. I speak plainly, at my age, and I tell you simply that I’ve lost my heart to you.”

Stereotyped as the phrase was, Lisbeth obviously believed it, and was delighted by it. She flushed, and put her cheek to Mikael’s lips.

Lisbeth eyes followed them till Mikael’s graceful figure was out of sight, and then the smile remained on her face.

Lisbeth saw out of the window how he put his arm in Erika’s, and began telling her something eagerly, obviously something that had nothing to do with her, and at that she felt annoyed.

Hobbit and The Fellowship of the Mowing 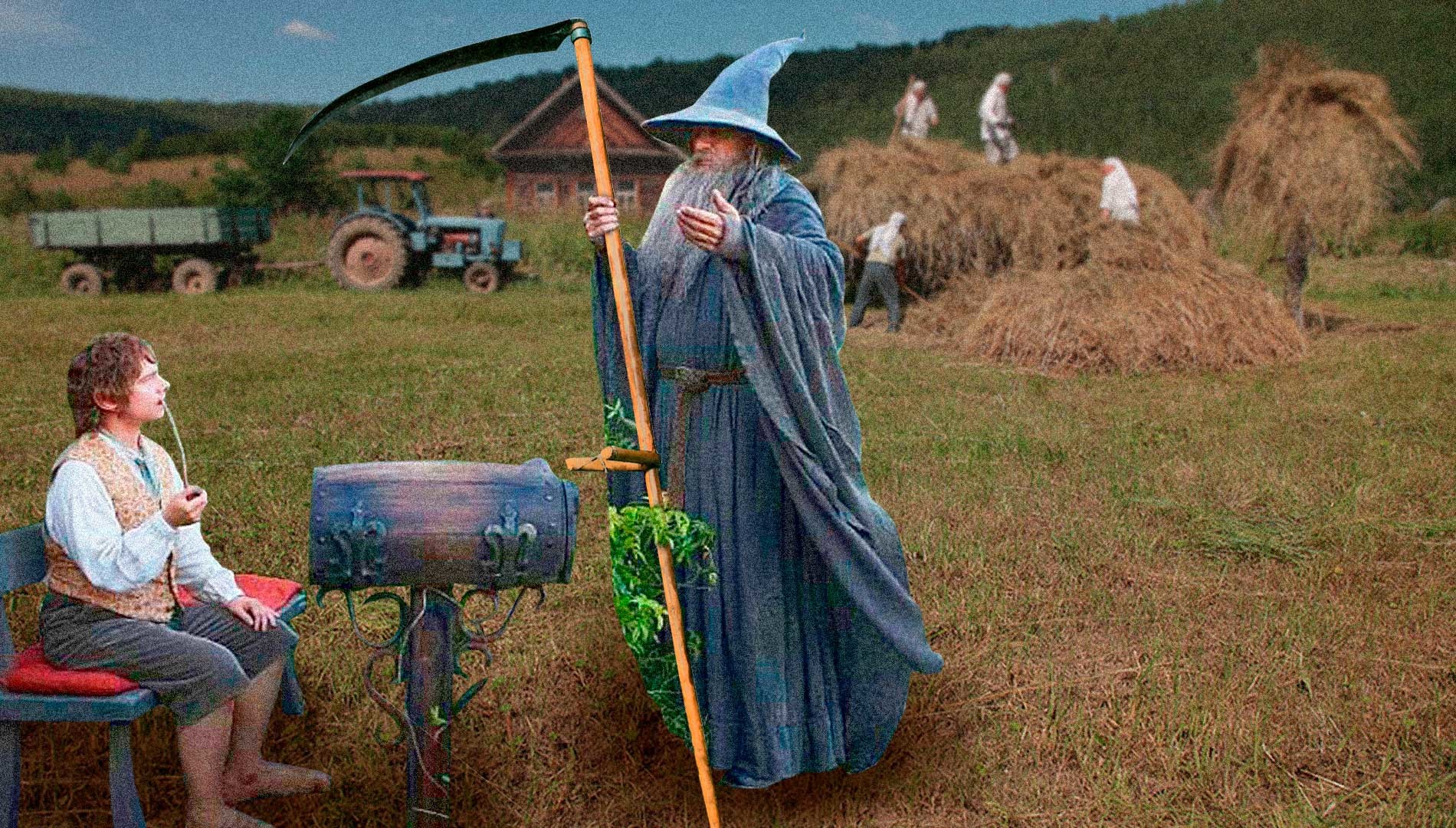 After lunch Bilbo Baggins turned back to mowing. The old man, Gandalf holding himself erect, moved in front, with his feet turned out, taking long, regular strides, and with a precise and regular action that seemed to cost him no more effort than swinging one’s arms walking, as though it were in play, he laid down the high, even row of grass.

Behind Bilbo came Frodo. His pretty, boyish face, with a twist of fresh grass bound round his hair, was all working with effort; but whenever anyone looked at him he smiled. He would clearly have died sooner than admit that it was hard work for him.

In the very heat of the day the mowing did not seem such hard work to Bilbo. The perspiration with which he was drenched cooled him, while the sun, that burned his back, his head and his arms, bare to the elbow, gave a vigor and dogged energy to his labor. More and more often now came those moments of unconsciousness, when it was possible not to think what one was doing. The scythe cut of itself. These were happy moments.

Bilbo did not notice how time was flying. If he had been asked how long he had been working he would have said half an hour—and it was getting on for dinner time.

“Come, Bilbo, dinner time!” Gandalf said briskly. Bilbo sat down by the wizard and dwarves; he felt disinclined to go back to The Shire.

All constraint with Gandalf and his fellows had disappeared long ago.

“Come, Bilbo, taste my sop,” said the wizard, kneeling down before the cup.

The sop was so good that Bilbo gave up the idea of going home. He felt everything was so changed. All the circumstances, all his business that didn’t let him join Gandalf to the Lonely Mountain and treasures guarded by Smaug the Dragon – everything became insignificant for Bilbo. 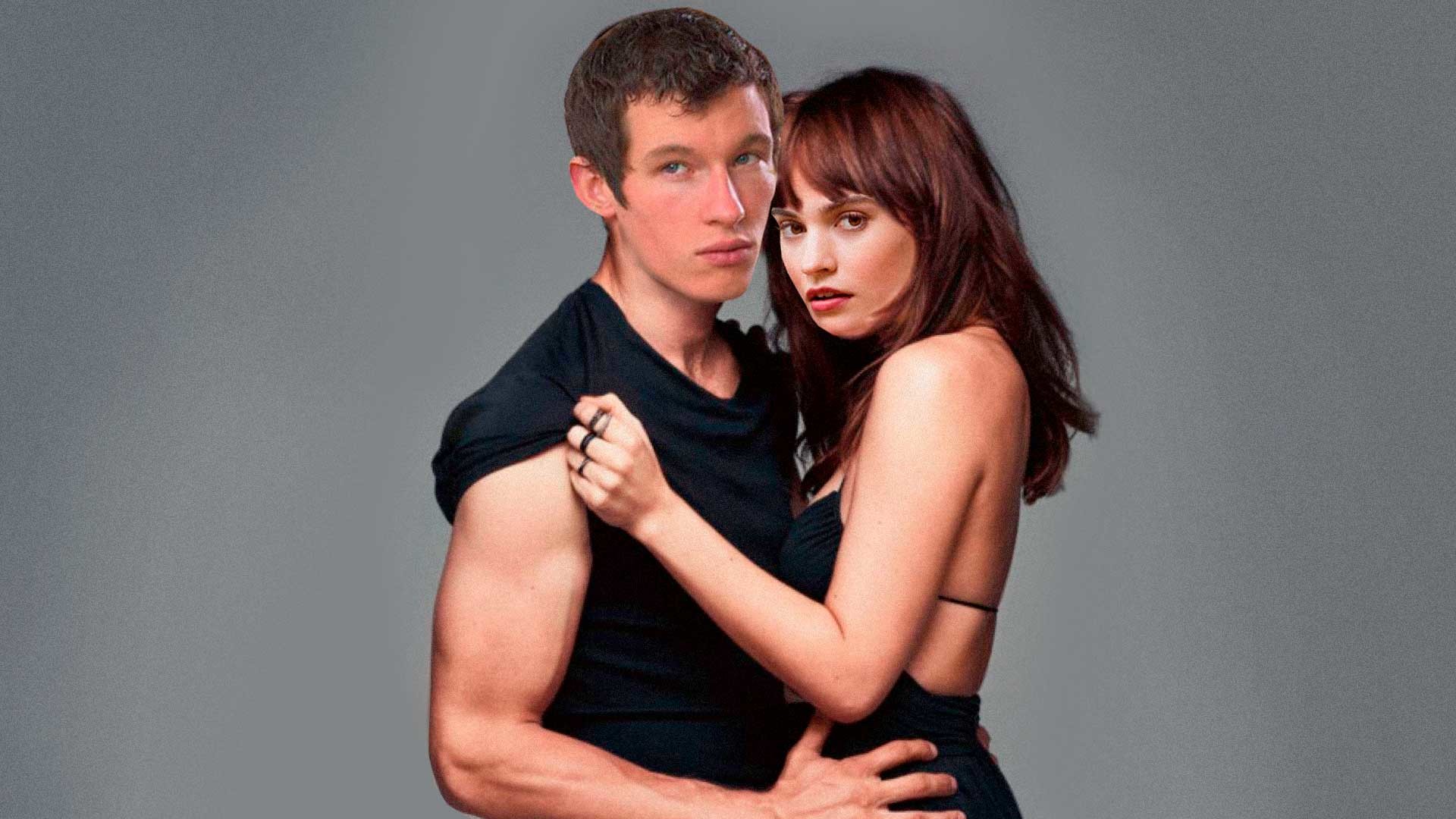 Natasha Rostova stood rather shakily trying to suppress her nerves. Gathering her courage, she abandon her glass of water and made her way to the partially open door.

While entering the door she felt tangled in the hem of the long dress, and she felt gentle hands around her helping her to stand. She was so embarrassed, damn her clumsiness. She has to steel herself to glance up. Holy cow - he's so young.

"I was expecting Mr. Rostov." He extends a long-fingered hand to her. "I'm Anatole Kuragin. Are you all right? Would you like to sit?"

So young and attractive, very attractive. He's tall, dressed in a fine gray suit, white shirt and black tie with unruly dark copper colored hair and intense, bright gray eyes that regard Natasha shrewdly. It takes a moment for her to find her voice.

In a daze, she puts her hand in his and they shake. As their fingers touch, she feels an odd exhilarating shiver run through her. She withdraws her hand hastily, embarrassed. Must be static. She blinks rapidly, her eyelids matching her heart rate.

"My brother is indisposed, so he sent me. I hope you don't mind, Mr. Kuragin."

"I see," he says simply. She sees the ghost of a smile in his expression. "Would you like to sit?" He waves her toward a white leather buttoned L-shaped couch.

"I have some questions, Mr. Kuragin."

"I thought you might," he says, deadpan. She felt he's laughing at her, and her cheeks heat at the realization. She sits up and squares her shoulders in an attempt to look taller and more intimidating.

"You're very young to have such a high rank in Kutuzov's army. To what do you owe your success?" She glances up at him. His smile is rueful, but he looks vaguely disappointed.

"War is all about people, Miss Rostova, and I'm very good at judging people. I know how they tick, what makes them flourish, what doesn't, what inspires them, and how to incentivize them."

"Maybe you're just lucky." This isn't on brother's list - but he's so arrogant. His eyes flare momentarily in surprise.

"I don't subscribe to luck or chance, Miss Rostova. The harder I work the more luck I seem to have. It really is all about having the right people on your army and directing their energies accordingly. I think it was Napoleon who said 'the growth and development of people is the highest calling of leadership.'"

"Oh, I exercise control in all things, Miss Rostova."