6 of the most massive Russian paintings

Culture
Alexandra Guzeva
Special rooms were built and thousands of sketches drawn for these canvases, which took years to complete. Some of the richest people of the time bought them. Russia Beyond presents six of the best know - but they probably won't fit in your flat…

1. Konstantin Makovsky. 'The appeal of Minin to the People of Nizhni Novgorod' 1896

The largest artwork in our list was took almost 20 years to complete. Already an experienced painter of historical canvas, Makovsky was inspired by Repin's “Reply of the Zaporozhian Cossacks to Sultan Mehmed IV” and decided to outdo the master. 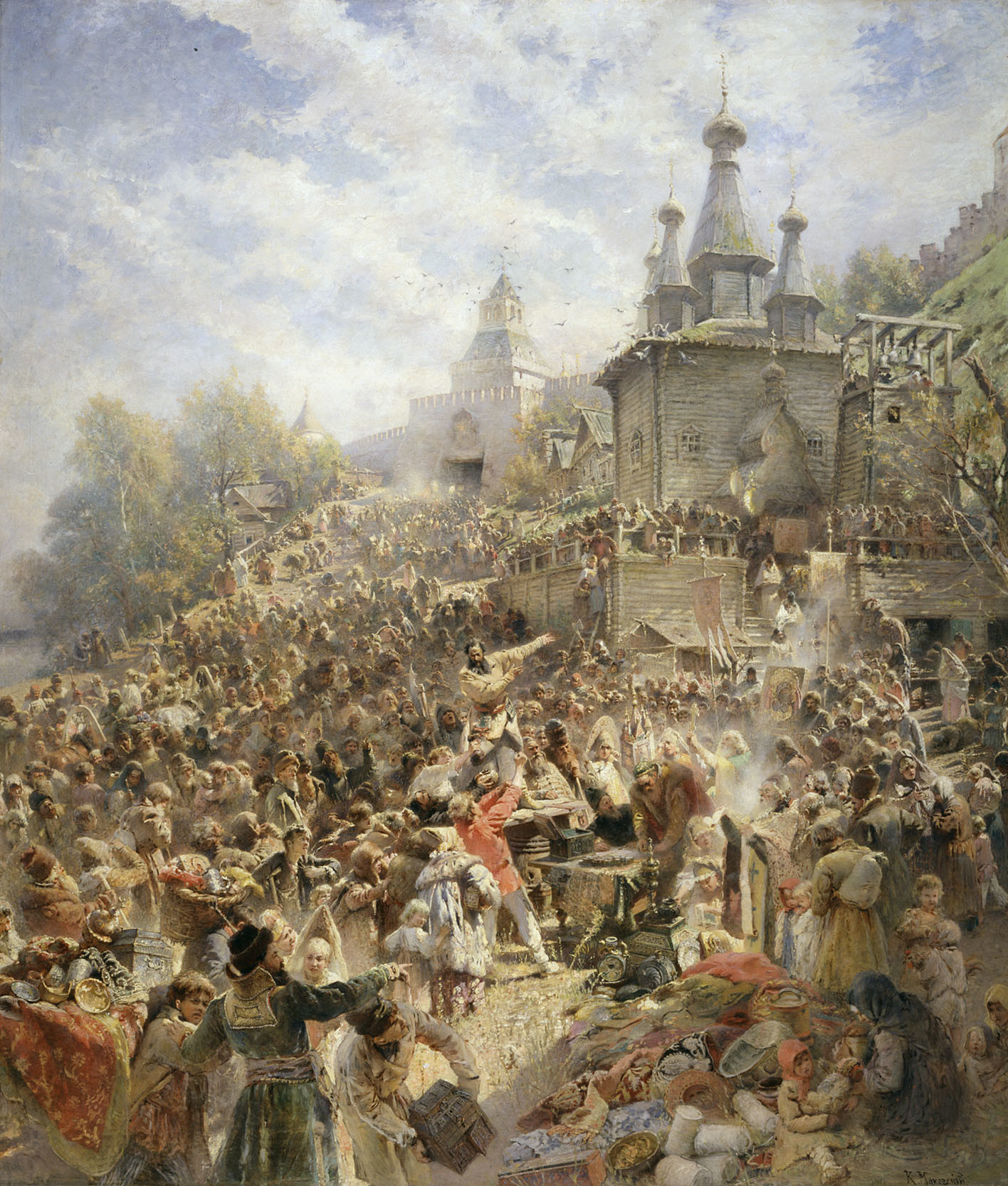 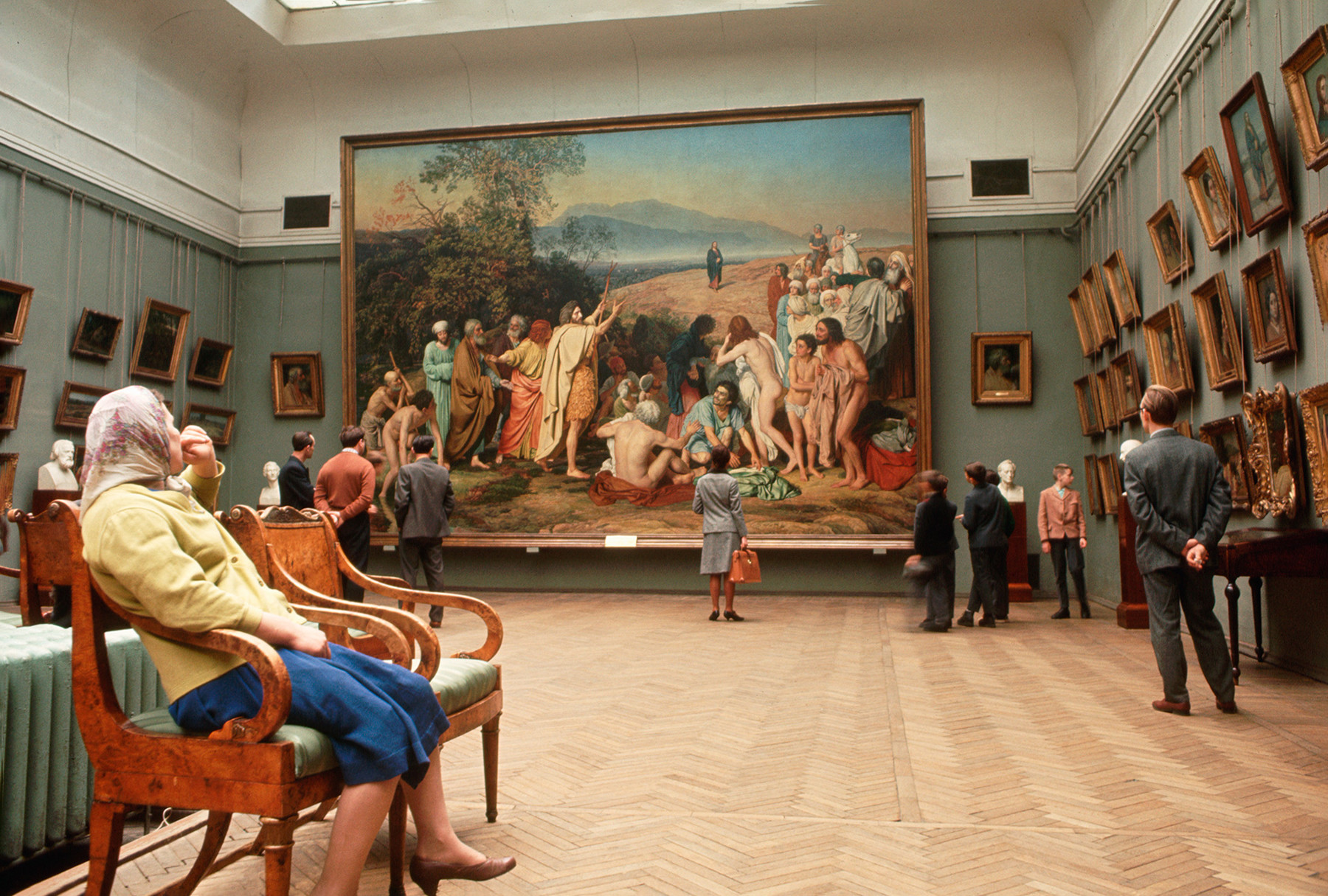 Ivanov worked on the canvas for 20 years in Italy. The Russian royal family paid to have the painting transported to St. Petersburg, where it was displayed along with numerous sketches. After the artist's death, Emperor Alexander II purchased the painting and donated it to the Rumyantsev Museum, the first public museum in Moscow.

A separate building was erected for it, and later a separate room provided in the Tretyakov Gallery, to which it was moved after the 1917 Revolution. 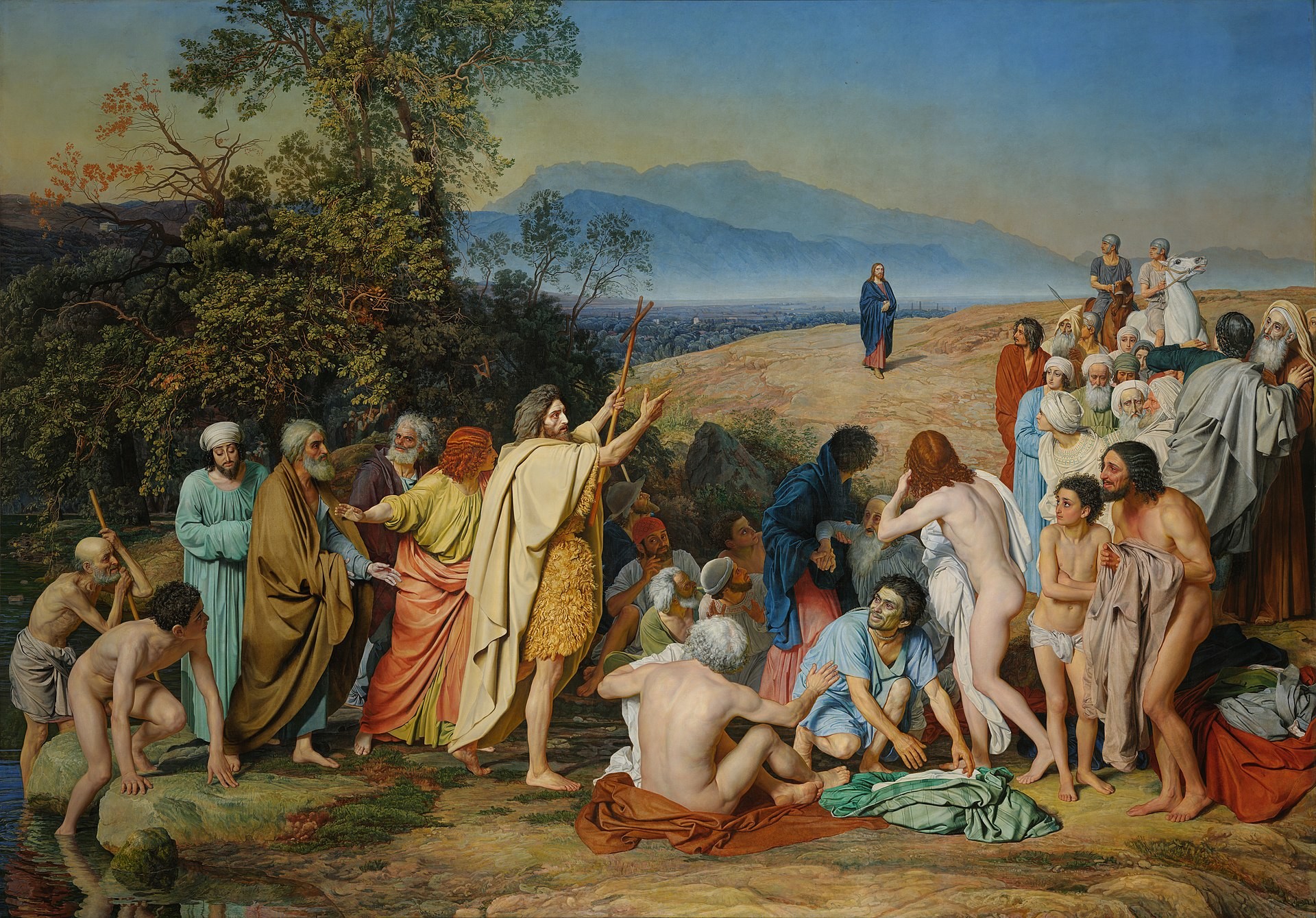 As models for the figures of pilgrims, saints and Christ himself, Ivanov used antique statues, trying to give them oriental features. And the face of a wanderer with a staff (sitting to the right of the central figure of John the Baptist) is a self-portrait of the artist.

3. Ilya Repin. Ceremonial Sitting of the State Council on 7 May 1901 Marking the Centenary of its Foundation. 1903 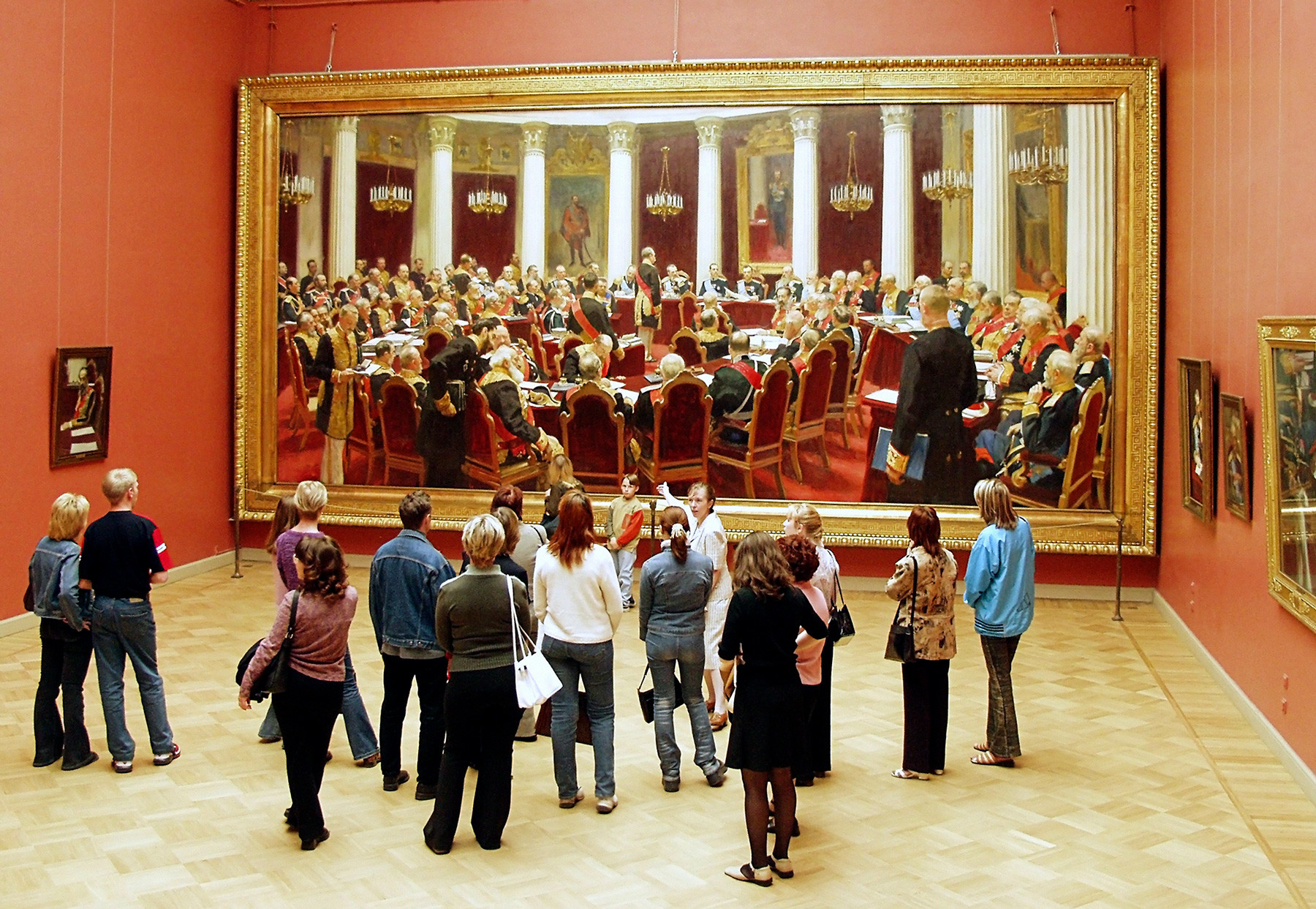 This massive canvas is by Ilya Repin. Painted in the "group portrait" genre, the work was personally commissioned by Tsar Nicholas II.

Repin attended the ceremonial sitting of the council and took a group photograph, which helped him in his work. However, for the portrait sketches, each member of the council sat separately for the artist or his assistants, Ivan Kulikov and Boris Kustodiev.

The artist had been supposed to portray Nicholas II delivering his formal address, but decided to add emotion and movement, and depicted the moment medals were being distributed. He had all the sketches personally approved by the Tsar.

The painting was initially exhibited at the Mariinsky Palace in St. Petersburg, the original venue of the council sitting. Later it was moved to the Russian Museum where, together with the sketches, it occupies an enormous room. 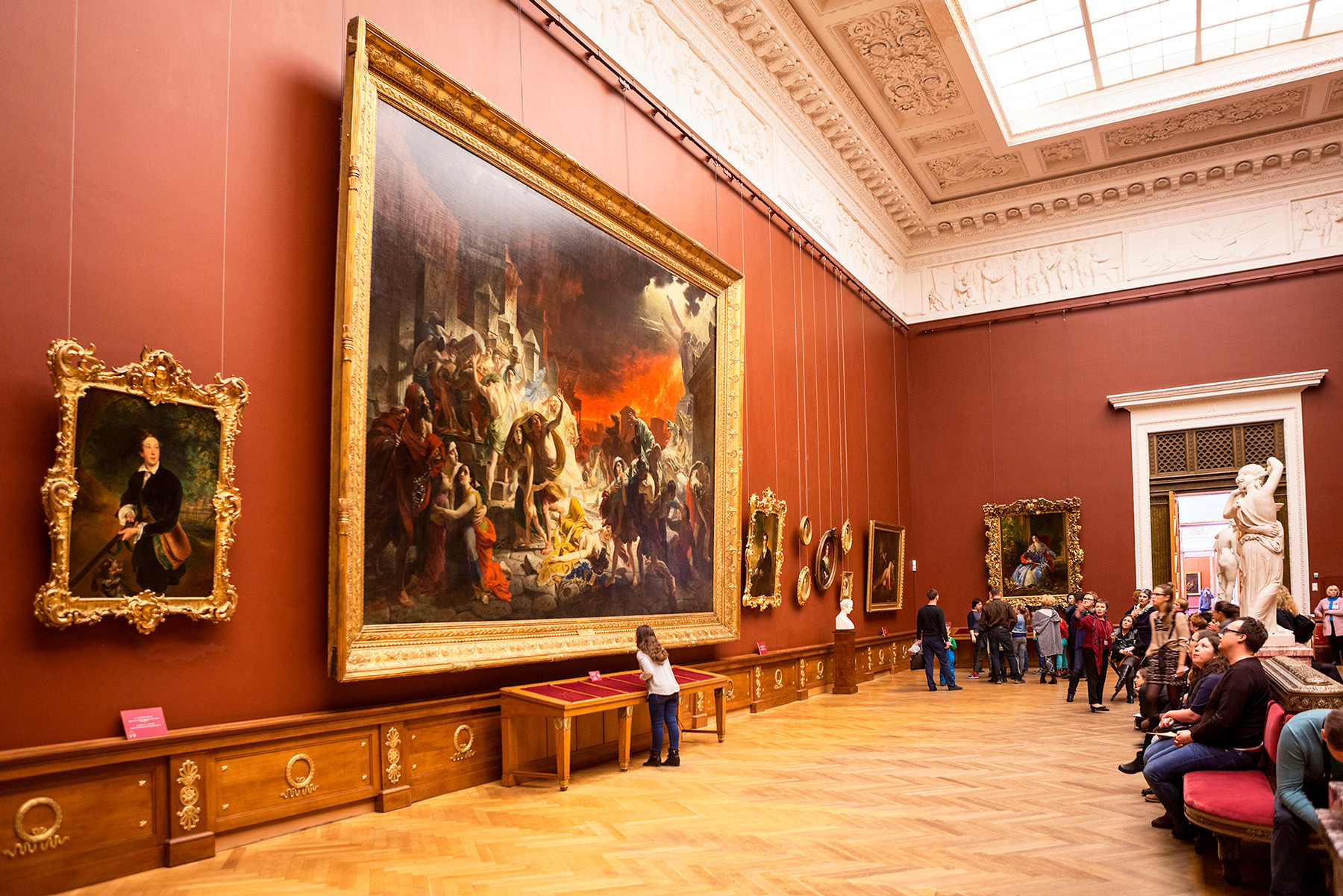 The idea of a large canvas about the destruction of Pompeii came to Bryullov during a trip to Naples. Most of the work was done in Rome over a six-year period. After being inspired when he spent several days walking through the ruins of the, then recently discovered, Roman town, the artist consulted historical sources in various archives before embarking on his masterpiece 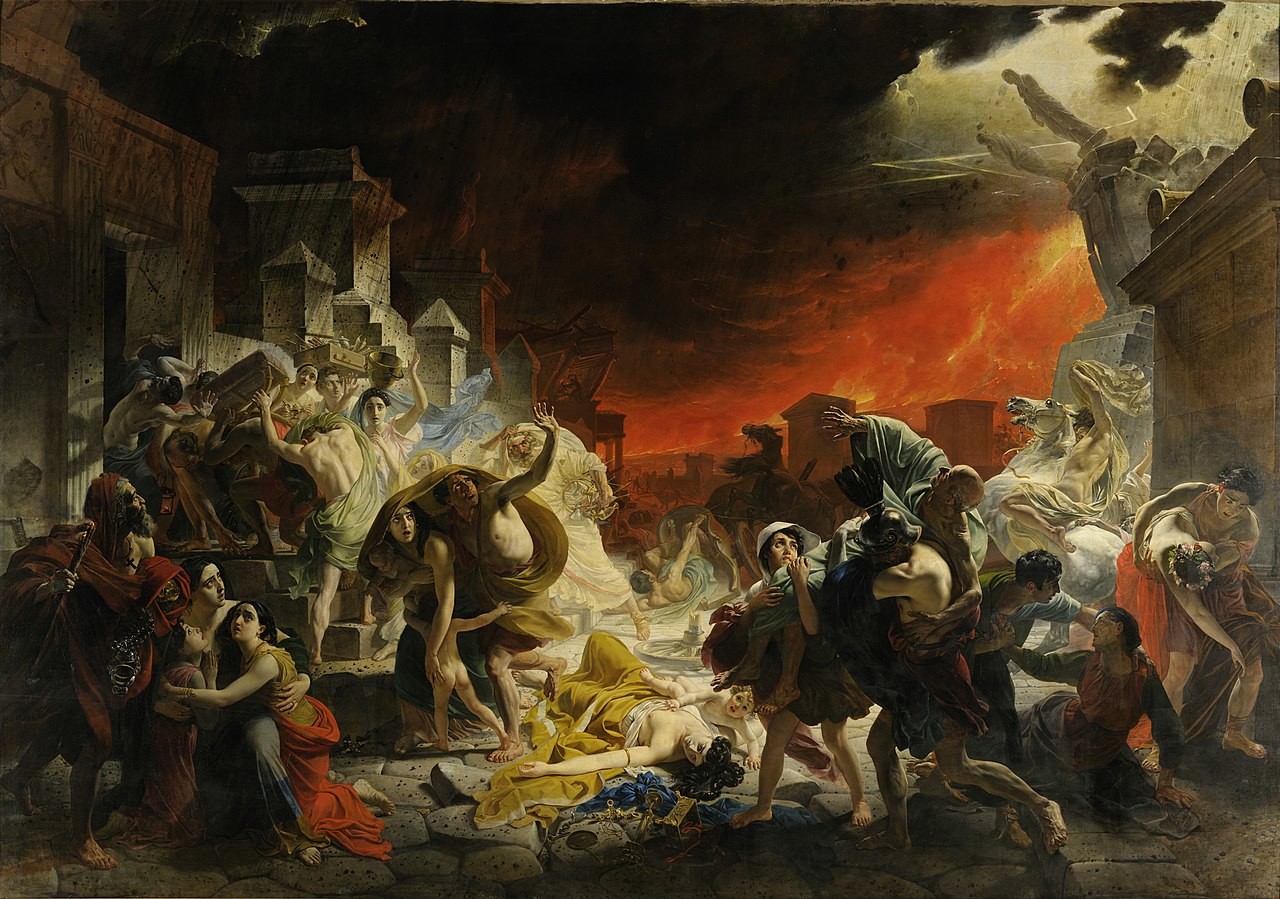 painting was a great success. It was exhibited in Milan and Paris, and then brought to St. Petersburg and presented as a gift to Tsar Nicholas I. Initially the canvas was displayed at the Hermitage, and the whole city flocked to see it. At the end of the 19th it was moved to the Russian Museum, where it remains to this day.

5. Vasily Polenov. Christ and the Woman Taken in Adultery. 1888 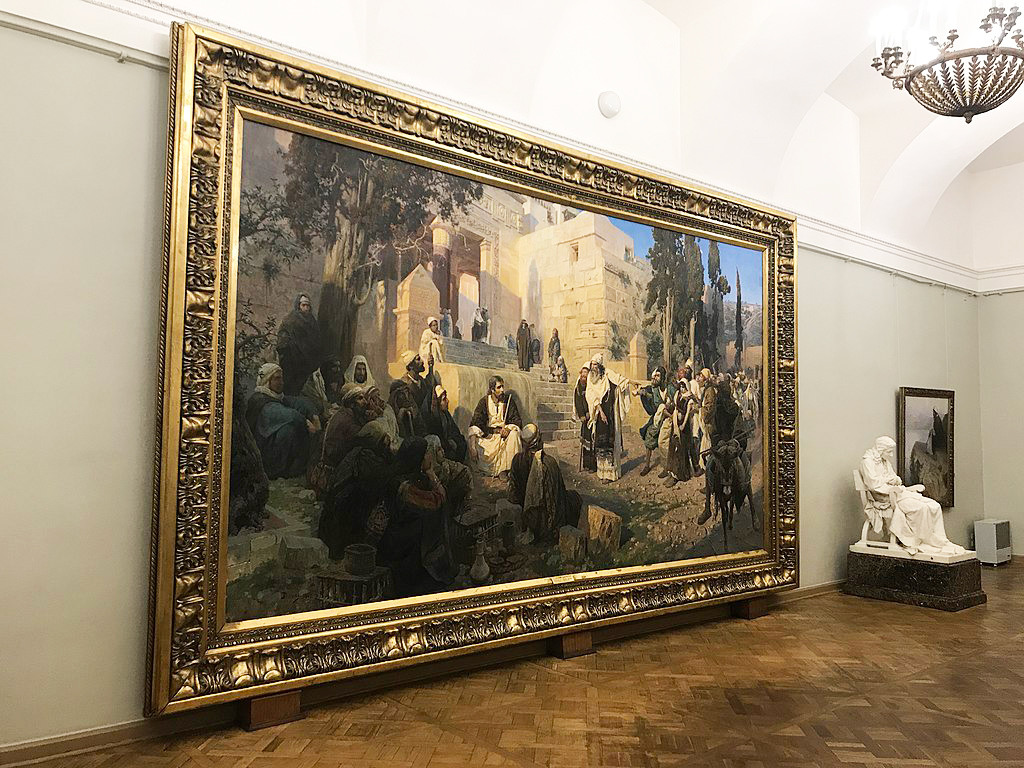 Polenov was one of the main Russian religious painters. He started his Christ and the Woman Taken in Adultery under the influence of Ivanov's The Appearance of Christ before the People. In search of inspiration, he went to the Middle East and, to aid authenticity, made a huge number of sketches of buildings and local people. Polenov's wife personally made all the costumes for the characters, which the artist painted from life. 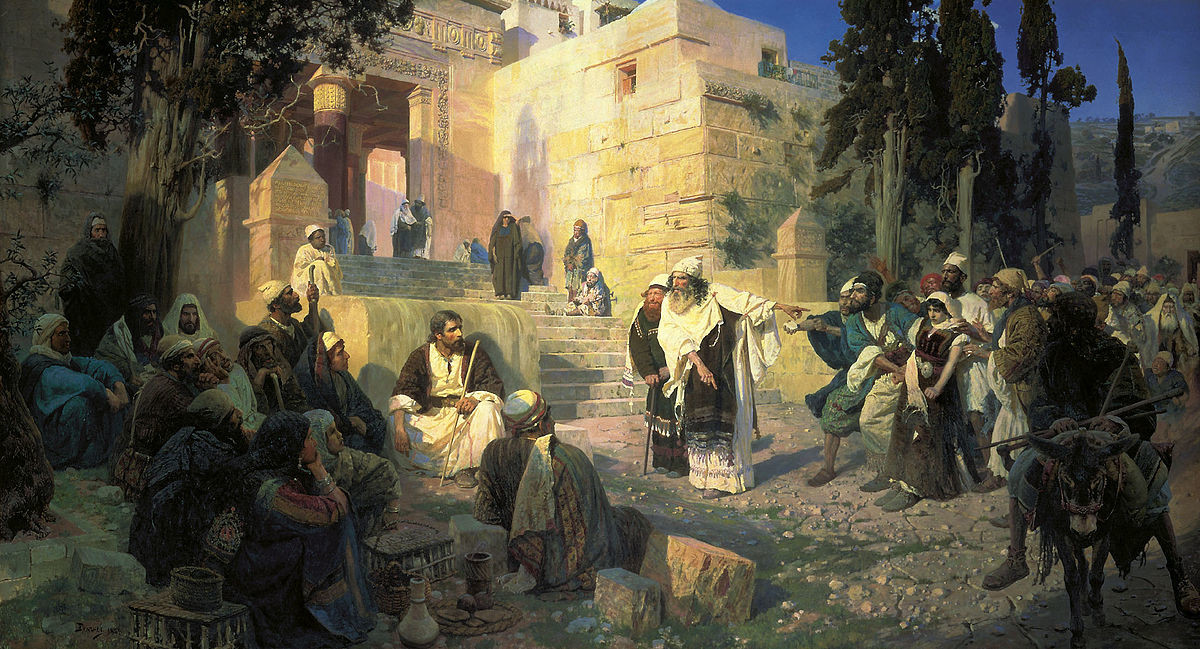 With the proceeds from the sale of the picture (it was bought by Emperor Alexander III) the artist purchased an estate and had a house built (now the Polenov Museum), where he set aside a special room for a full-scale sketch of the painting. The original is displayed at the Russian Museum in St. Petersburg. 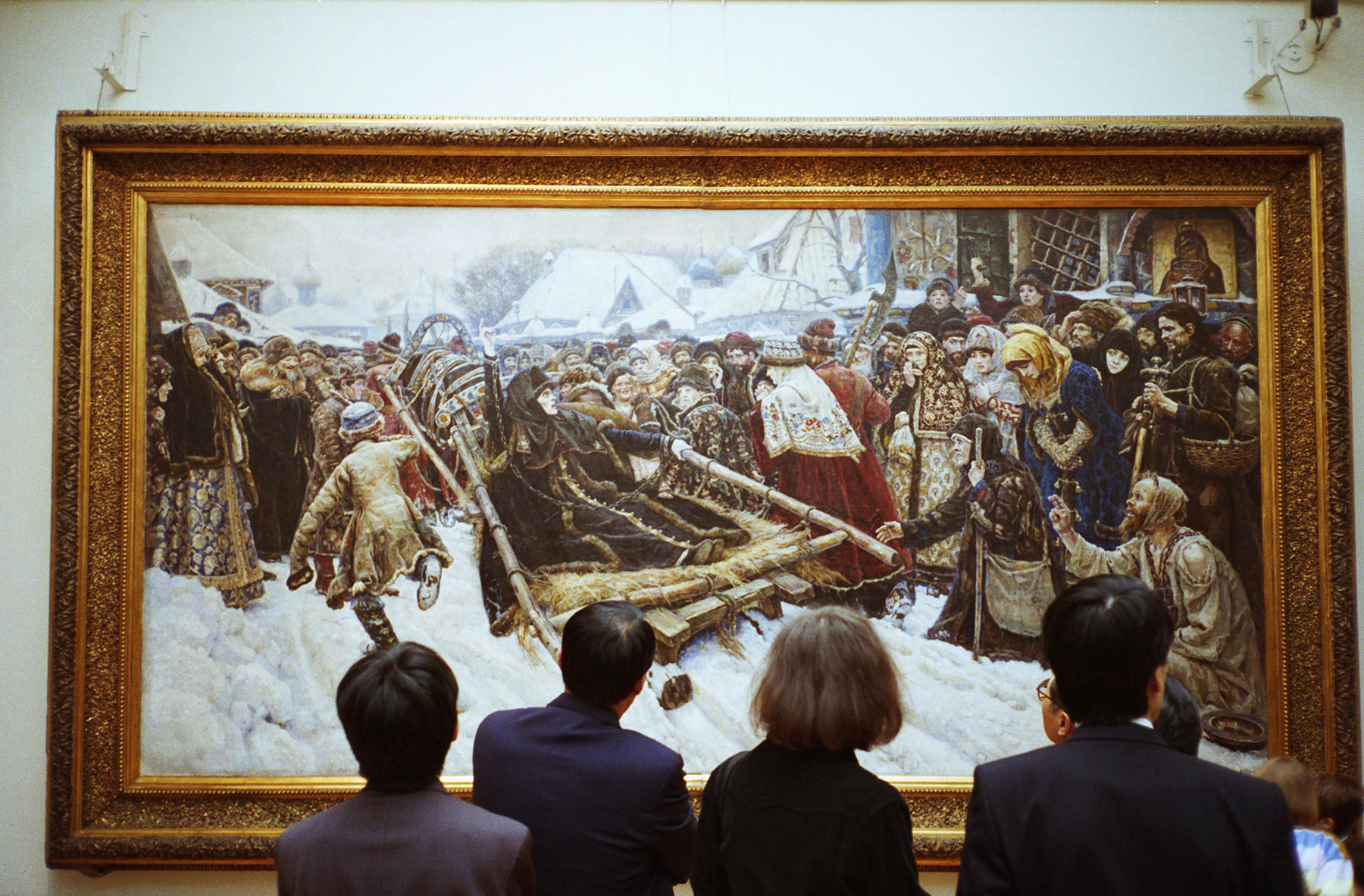 Yet another major masterpiece in the Tretyakov Gallery depicts a dramatic moment in Russian history - an Orthodox Church schism. The rich [noblewoman] who is being taken away in shackles shows two fingers as a symbol that her old faith could not be broken. 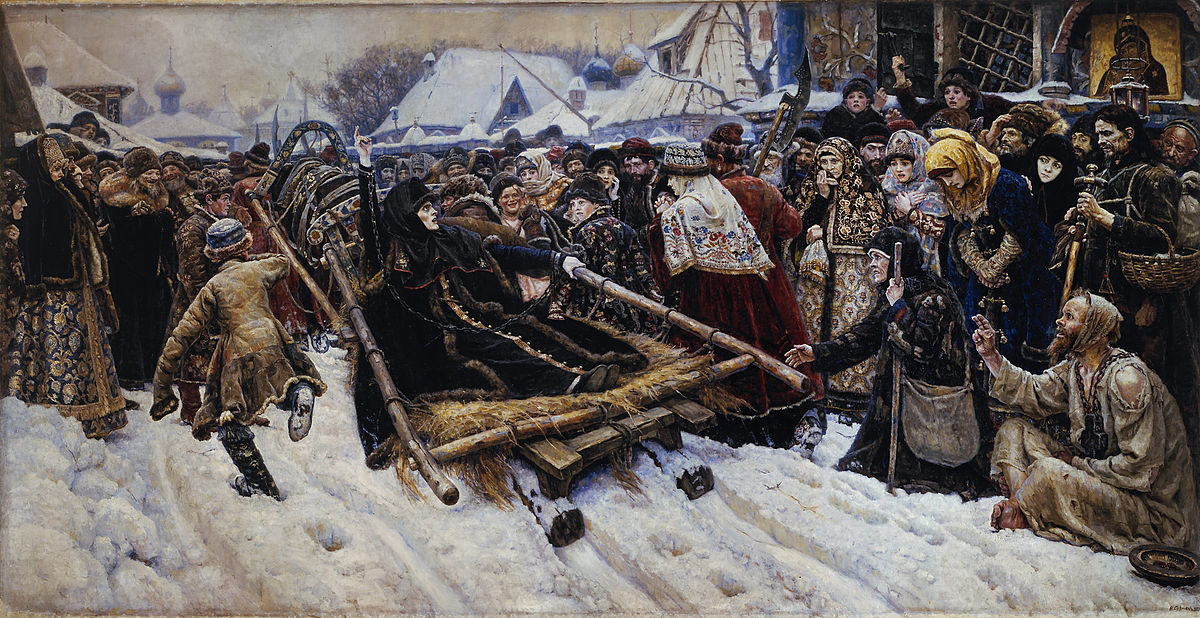 Surikov was born and grew up in Siberia where there were many Old Believers, so the topic of the schism always interested him. The characters, including the noblewoman, were sketched from random encounters. In the museum alongside the you can see the sketches for their portraits.

READ MORE: 10 of the most famous paintings every Russian knows