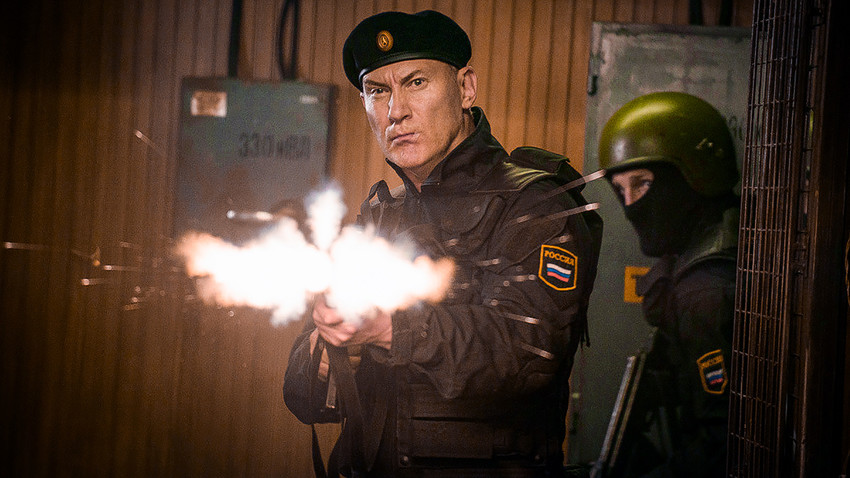 Donovan Marsh/Original Film, 2018
With the collapse of the Soviet Union and end of the Cold War, Russia ceased to be Hollywood's enemy number one. But this hasn’t stopped Western filmmakers from using every stereotype out there when portraying Russia in big blockbusters.

Goldeneye was the first Bond movie made after the collapse of the Soviet Union and end of the Cold War – but the Russian threat was still very fresh in the minds of Hollywood directors.

It’s the mid-1990s and Russia, suffering from an economic and political crisis, is slipping into civil war. The U.S. is worried about the country’s nuclear weapons amid the and sends its underwater fleet to Russia’s coast to try and control the situation, as the threat of global nuclear war looms large.

Again, it’s the 1990s and Russia is in deep crisis. Muscovites are freezing in their flats without heating. Local oligarch Ivan Tretyak, who wants to oust weak President Karpov, directs all the people's rage towards the Americans, and angry crowds besiege the U.S. embassy.

Nobody knows, however, that Tretyak is the real reason fueling the ongoing crisis. Now only scientist Emma Russell and professional thief Simon Templar can stop the mad villain.

The Cold War is over and Russia has become a trusted ally of the U.S. However, Kazakhstan’s leader General Radek dreams of restoring the mighty Soviet Union.

After Radek is seized by joint Russian-American special forces, a group of his henchmen capture the aircraft carrying the U.S. President and take him hostage in a bid to get their own leader back.

Despite the main villain of the movie being Kazakhstan, not a single Kazakh actor stars in the film. All opponents - from terrorists on the plane to enemy MiG aircraft pilots - are Russians.

According to Hollywood, any criminal worth their salt attempts to steal a nuclear bomb at least once in post-Soviet Russia. In this film, General Kodoroff takes his chances and after successful nicking a weapon of mass destruction, his men try to flog it to Yugoslavian terrorists, whose target is somewhere in the U.S.

It seems that the only person who can stop the Russian General is the U.S. Army Special Forces Lieutenant Colonel Thomas Devoe, who starts his journey into unknown and dangerous Russia.

Jack Ryan is the character created by the American novelist Tom Clancy, who in 1984 embarks on the legendary hunt for Red October. In this story, an international terrorist group is trying to spark an war between Russia and the U.S. The countries reach the point of getting ready to exchange nuclear strikes, and, as always, only Ryan can save the situation.

In the fourth part of the famous franchise a terrorist named Cobalt does what all of Russia's enemy have dreamt about for centuries - he blows up Kremlin. However, the Russians mistakenly blame the American agent Ethan Hunt and the U.S. for the crime. As always, the two countries are on the brink of the nuclear war.

To clear his name and prevent the conflict agent Hunt needs to find and stop Cobalt before the Russian special agents capture him.

The movie is a remake of 1984 Red Dawn about invasion of the Soviet troops in the US. In the new version the Soviets were replaced by the North Koreans. However, we soon find out that aggressors are backed by ultra-nationalist Russia. Americans have to deal not only with Korean invaders, but with a group of Russian Spetsnaz, which landed in their country.

Another holiday for Jack Ryan in Russia. This time the CIA analyst needs to stop Russia’s Interior Minister and powerful tycoon from fueling an economic collapse in the U.S.

This is one of only a handful movies in which Hollywood shows the Russian Army as a powerful and modern force, and not as an obsolete, ridiculous horde.

The Russian President has been overthrown by the warmonger Minister of Defense and is being kept at a naval base in northern Russia. Americans secretly send their special forces to rescue the President and prevent WWIII.