Did you know Russian poet Pushkin was a playboy?!

Culture
Alexandra Guzeva
Pixabay, Global Look Press, Petr Sokolov/Wikipedia; George Hayter/Hermitage Museum
The wife of his boss, a neighbor, a young beauty… Alexander Pushkin went down in history, not just as a poetic genius, but also as a great lover and seducer of women, with a very long ‘Don Juan list’.

In those old Lyceum days,
In the first bright flower of youth,
Apuleius won my praise,
While Cicero I loathed, in truth.

In Eugene Onegin, his novel in verse, Pushkin confesses that he was interested in erotica and love from an early age. Apuleius was a Roman author who wrote Metamorphoses, a novel about the adventures of a young Roman, containing very explicit sex scenes.

While still at the Lyceum, a young Pushkin, fascinated by the sentimental lyrics of Vasily Zhukovsky, wrote a large number of love elegies: Endless poems dedicated To Natasha, To Masha, To Her, To A Young Widow and even To The Pretty Woman Who Took Snuff, in which he dreams of ending up on the girl's fingers, taking the place of the "green toxic weed". 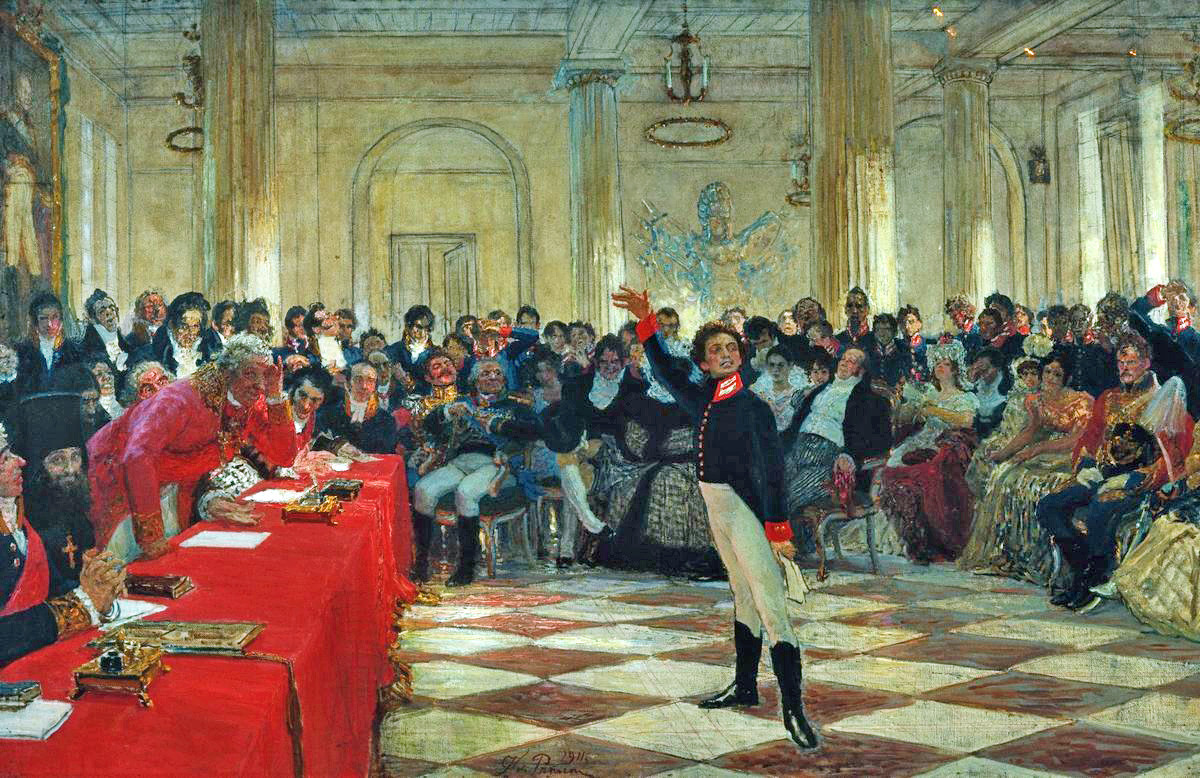 Pushkin at the Lyceum (by Ilya Repin)

He wrote about how he had come to know Eros and Cupid, how his"passionate heart was captivated", how he was burning "fiercely in the intensity of passion" and longed for the "delights of pleasure" and nocturnal embraces (he addressed each of these to different women!).

Naturally, as befits any young poet, he wrote about suffering, separation and an approaching death that would free him from the agony of love.

Despite all the frivolity of his poetry of this time, Pushkin also wrote a lot about the Lyceum brotherhood, honor and loyalty, and discussed politics. But even in his political verse he compared the expectations of freedom to amorous experience:

We still await in anguished languor
Our festival of sacred freedom
Much in the way that a young lover
Awaits a tryst that’s been agreed on.

In 1820, when Pushkin was just 21, he was exiled for his political verses (To Chaadaev, Ode to Freedom and Village). He even compared himself to other fellow banished poets, such as Byron. But despite all his suffering, and his being far from home and separated from friends and family, he was clearly flattered by the ‘special’ position he found himself in. Incidentally, the poet was lucky - he was saved from being sent to Siberia by the efforts of his patron - historian Nikolai Karamzin. Instead, Pushin was exiled to the south. 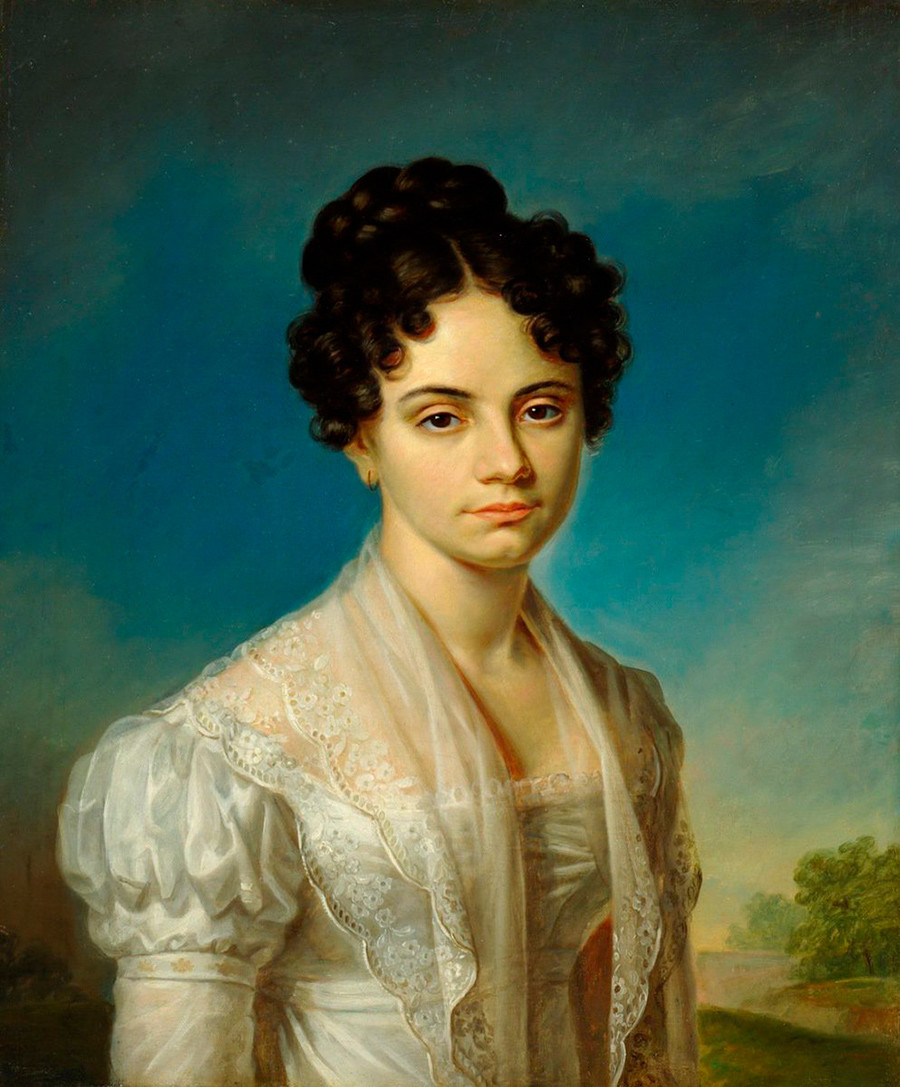 His first destination was the administrative office of the governor of Bessarabia (now Moldova, but then part of the Russian Empire) in Kishinev [Chișinău]. But, soon upon arrival, Pushin contracted pneumonia and the governor sent him with General Raevsky to convalesce by the sea.

The poet used to go on long walks in the mountains and along the coast, and, captivated by the sea, the Caucasus and Crimea, he wrote his ‘southern’ poems: The Prisoner of the Caucasus, The Fountain of Bakhchisarai and The Gypsies. Oriental motifs and spirited beauties, unlike the cold ones he had known in St. Petersburg, feature in all of them.

It was here that the idea of Eugene Onegin came to him and, of course, he wrote numerous lyrical verses here, as well. Many of them were dedicated to General Raevsky's daughters and, in particular, Maria. Pushkin scholars disagree on their relationship: there is a view that Maria had an unrequited love for the poet and allegedly was the prototype for Tatyana Larina in Eugene Onegin; other scholars believe that, on the contrary, it is Pushkin who was in love with her and that she was the dedicatee of his narrative poem, Poltava. It’s assumed that, in reminiscing about youthful frolics on the seashore, Pushkin had Maria in mind when he wrote, in Eugene Onegin, that he envied the waves that kissed "her" feet.

How I envied the waves then,
Each falling there as they form
To lie at her feet, in peace again!
How I longed to be those seas
Kissing her dear feet as they please!

In 1822, Novorossiya [New Russia] and Bessarabia were merged into one governorate and General Mikhail Vorontsov was appointed governor. Pushkin was transferred to his office, which was based in Odessa (now in Ukraine). The poet was ecstatic since Odessa at the time was second only to St. Petersburg in the Russian Empire, boasting theaters, social gatherings and other trappings of high society. There, Pushkin became one of the numerous admirers of Vorontsov's wife, Elizaveta. 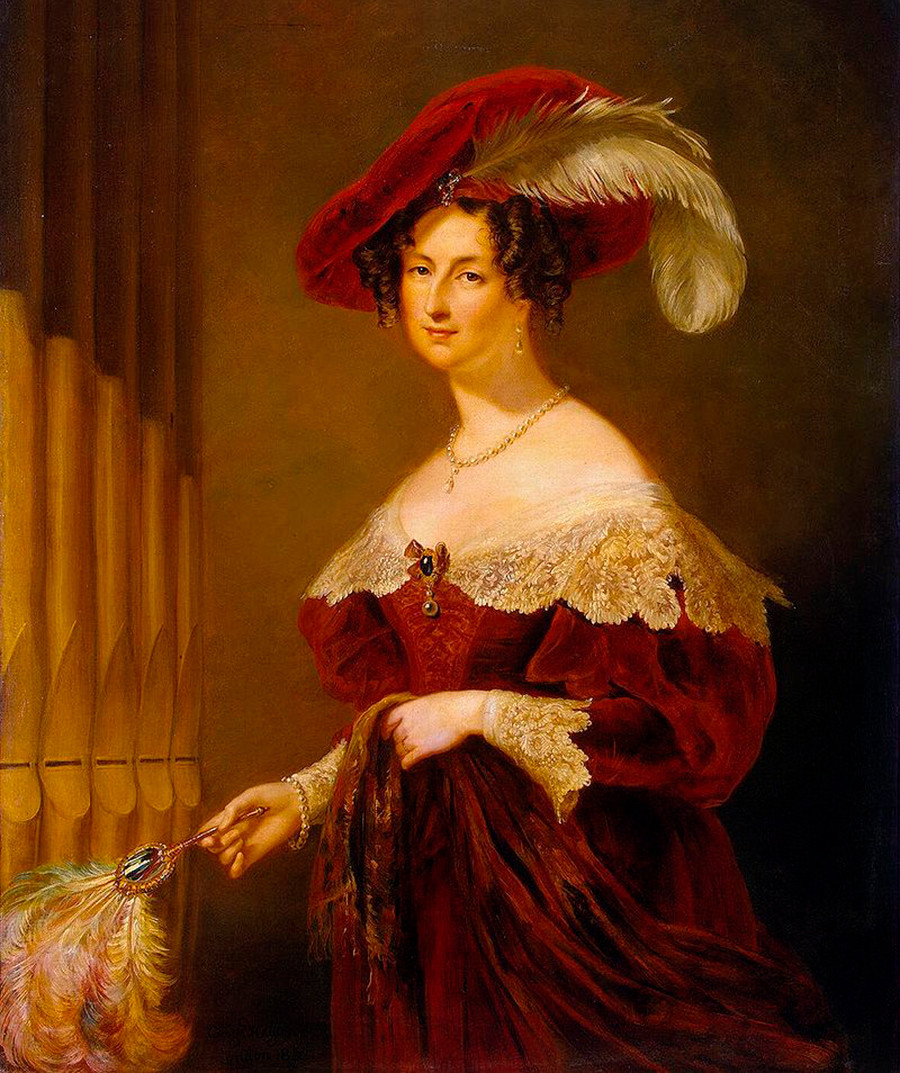 Pushkin's biographers also can't agree as to whether the poet had an affair with his boss’s wife. Some believe she had a daughter by Pushkin, while others are inclined to think their liaison was just platonic. In the poet's notebooks one can find many pencil drawings of Vorontsova.

Many poems were dedicated to her. For instance, it is believed that Pushkin described the situation with Vorontsova in his poem, Desire for Fame: The poet describes how a mistress stroked his head and asked him to pledge eternal love. And he believed they would never part:

In pure delight, I never even thought
that other days could come… the fearful time to part.

But the poem's lyrical hero learns that his mistress has been unfaithful and all that he longs for now is fame as a poet, which would come to the attention of his beloved and she would hear about it all the time and remember their declarations of love.

There were rumors in circulation that Vorontsova had a liaison with Colonel Raevsky and that he even made a scene in her husband’s house and, in order to divert suspicion from himself, slandered Pushkin. Raevsky is believed to be the addressee, as it were, of Pushkin's poem, The Demon, in which the poet describes an "evil genius" and a man essentially without principles.

His smile, and his wonderful glance,
His speeches, these so stinging,
Cold poison poured into my soul.

Pushkin’s good relations with his superior, Vorontsov, deteriorated, because of this affair and because of Pushkin’s greater interest in poetry than in work. In addition, the secret police had read one of Pushkin's letters, in which he talked about his passion for atheism, and so he was dismissed. That was how Pushkin's exile to the south ended. He was transferred to his family estate Mikhaylovskoye in the Pskov province. 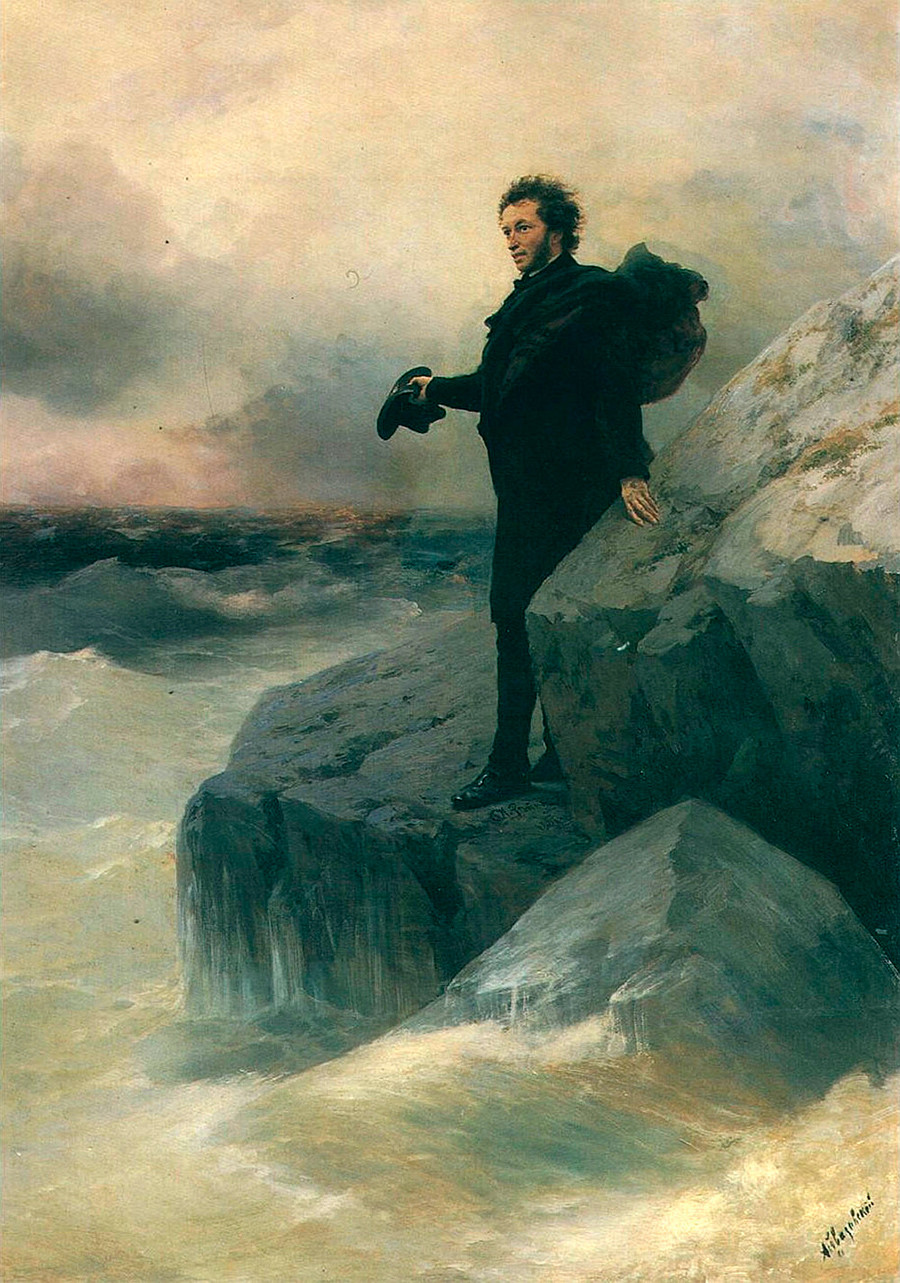 Pushkin farewell to the sea (By Ilya Repin, Ivan Aivazovsky, 1877)

When he was leaving, Elizaveta gave Pushkin a ring which remained his talisman to his final days. Vorontsova had warm feelings for the poet until her death, she read his works and later, in high society, even socialized with Pushkin's wife Natalya Goncharova (who was a very jealous person).

In an album belonging to high society lady Elizaveta Ushakova, Pushkin wrote two lists of women with whom he had been in love with or whom he had been fond of - over 30 names in total. He accompanied his ‘Don Juan list’ with a self-portrait, depicting himself as a monk and an inscription addressed to the Devil: "Do not tempt me needlessly". 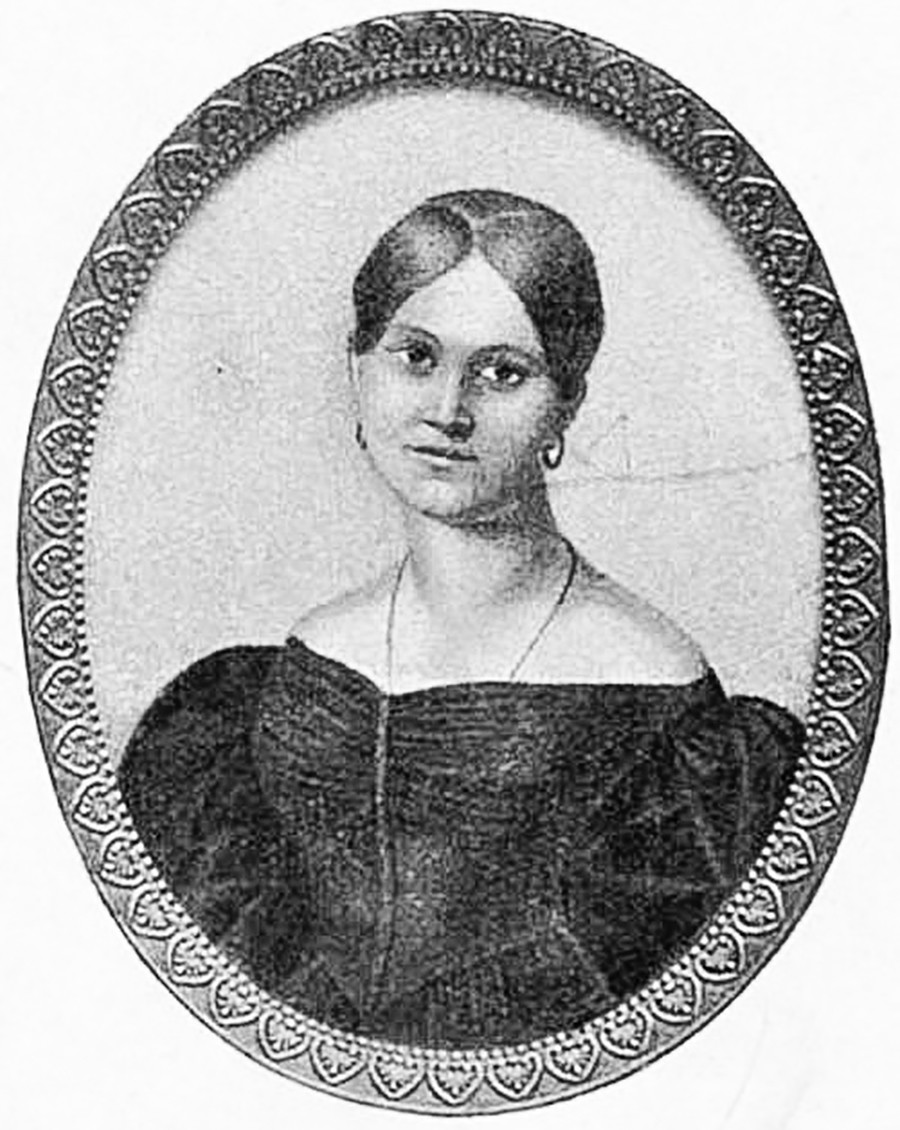 Pushkin scholars have almost fully deciphered the list, which contains quite a few significant names. There are five Annas in it and one of them is undoubtedly Anna Kern to whom Pushkin dedicated one of his most famous love poems - I Still Recall The Wondrous Moment.

After he returned from the south, the poet's exile continued at the family estate of Mikhaylovskoye in the north of the Pskov province (from 1824-1826). This period is considered to be one of the most productive in the poet's life. Nothing distracted him, he concentrated on his writing and accomplished all his plans. 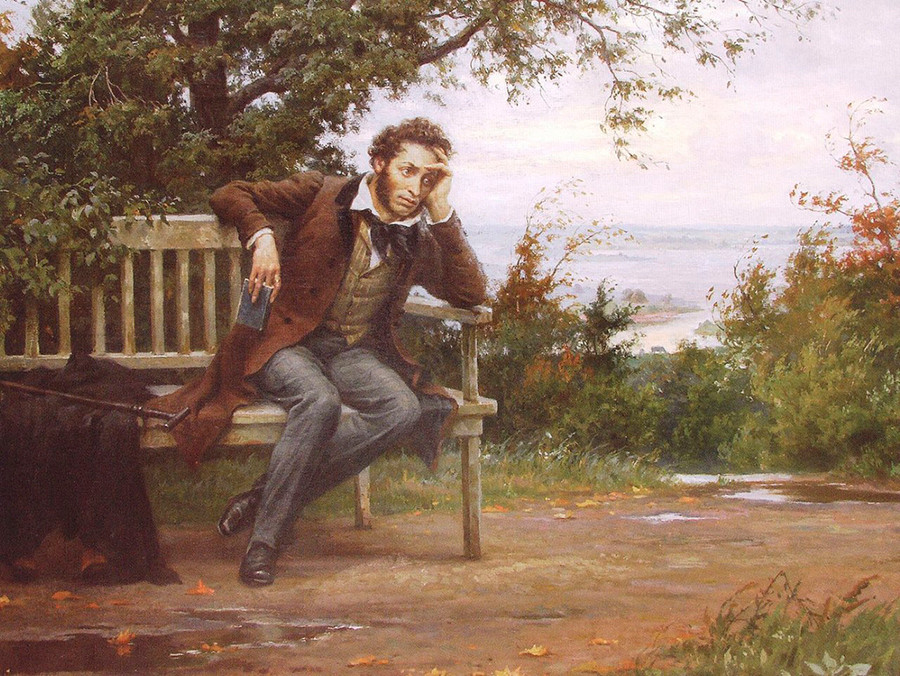 Pushkin in Mikhaylovskoye. (By Boris Shcherbakov, 1969)

e met Anna Kern at Trigorskoye, a manor house nearby, which he frequented. Their relations did not last long and were more like a game - Anna also flirted with other men. In Mikhaylovskoye, there is an alley named after Anna Kern and it is believed that the poet and his companion used to take walks there. In his various letters, Pushkin biographers have found acerbic and ironic remarks about Kern, reaching the conclusion that he most likely didn't have deep feelings for her.

Also at Mikhaylovskoye, Pushkin had an affair with a maid, Olga, a serf (he was the father of her illegitimate son who died in infancy).

In 1828, when Pushkin was 29, he was still unmarried, which was rather rare in high society. Because of his periods of exile he didn't have many potential brides to propose to. But with 16-year-old Natalia it was love at first sight. But his proposal of marriage was received coldly, although Natalia's parents did not express a categorical "no". The bride was too young and the poet had already acquired a reputation as a shameless womanizer. 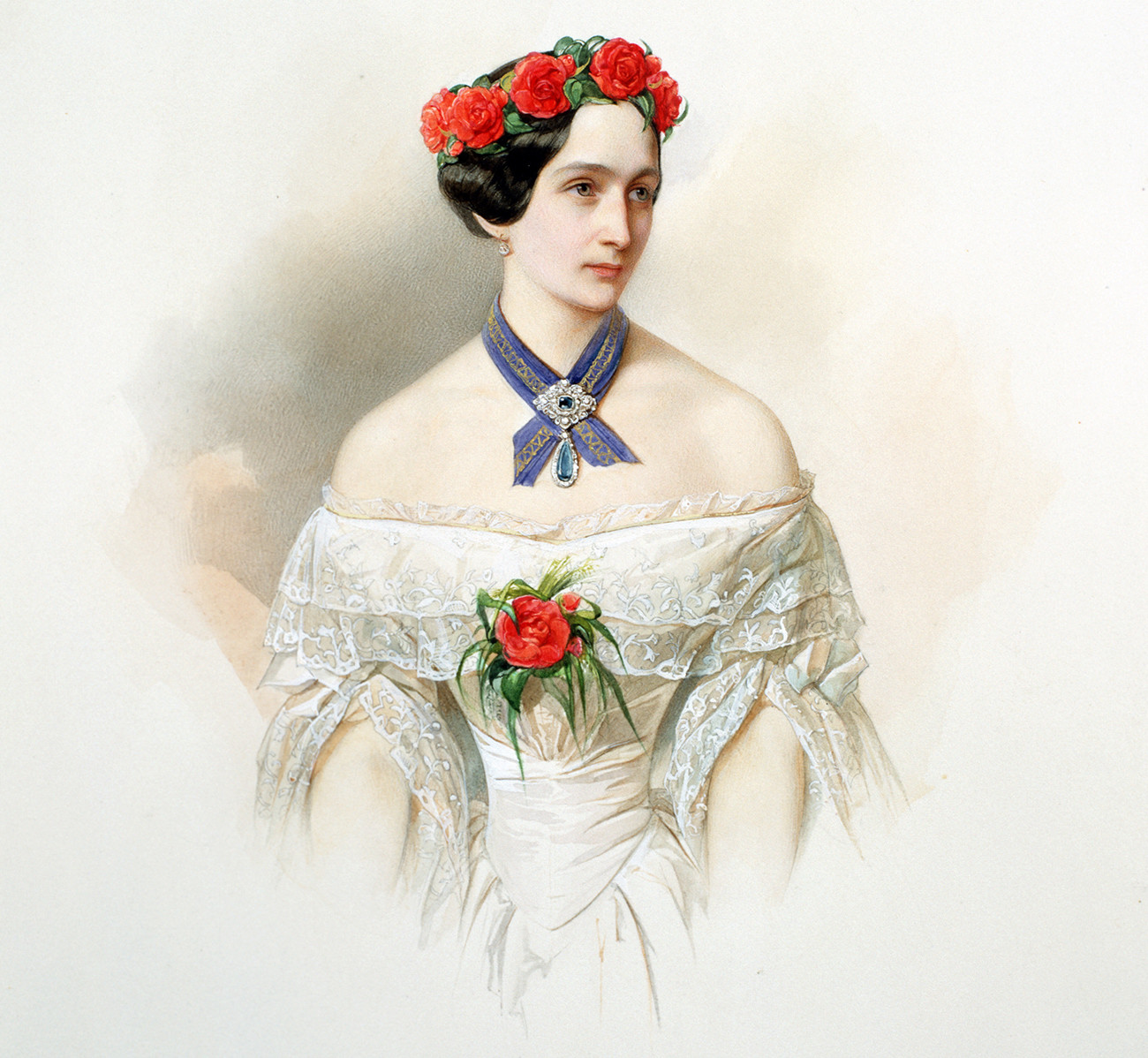 Pushkin left for the Caucasus, where a war was going on at the time; later he wanted to travel abroad, but the secret police refused to give him permission. And in 1830, he again proposed to Natalia and this time she agreed.

"My marriage to Natalie (this, I will observe in brackets, is my hundred and thirteenth love) has been decided," the poet wrote jokingly to the wife of his friend Pyotr Vyazemsky. But in reality, Goncharova was Pushkin's great love, whom he compared to the Madonna:

God has shown thy face
To me; here, my Madonna, thou shalt throne:
Most pure exemplar of the purest grace.

Goncharova gave birth to four children, but Pushkin's love and family happiness were marred by his position in society and his work. His best poems were edited out by the censors, Emperor Nicholas I granted him the insulting lowest courtier title of Kamer-Junker, and he was prevented from writing major prose works (because the authorities kept him in St. Petersburg and didn't let him take a break in the countryside or in Moscow). His readers and critics believed that his talent had diminished, his books were not selling well and gambling had landed him in growing debt.

Pushkin became nervous and very jealous, and then rumors appeared that his wife was conducting a liaison with French officer Georges d'Anthès. Pushkin challenged d'Anthès to a duel in which the poet was mortally wounded, and he died two days later in his bed (read more about the dule here). On his deathbed, he asked the Tsar for forgiveness and the latter promised to take care of his wife and children. And, true to his word, the Tsar did pay off all of Pushkin's numerous outstanding debts.

READ MORE: 10 reasons why Pushkin is so great