Russia in the movies: real or fake? 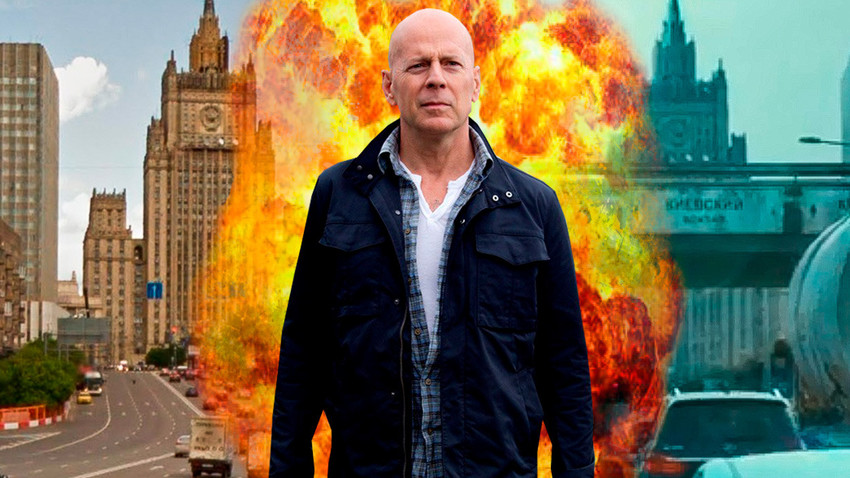 In Good Day to Die Hard, real shots of Moscow were edited into the scenes filmed in Budapest. An extra bridge (right) appeared across Borodinsky Bridge (left). The sign on it suggests that the road leads to Kievsky Vokzal. In reality, it leads away from it.

Google maps; John Moore/Dune Entertainment, Media Magik Entertainment, Twentieth Century Fox Film Corporation, 2013
“This isn’t Moscow”, or “this doesn’t look like Russia” is a common complaint Russians make when watching movies about… Russia. Can you spot the filming locations in which Russia was real and where it was faked? Here is a list of locations that actually “stood in” for Russia in popular movies and TV shows. 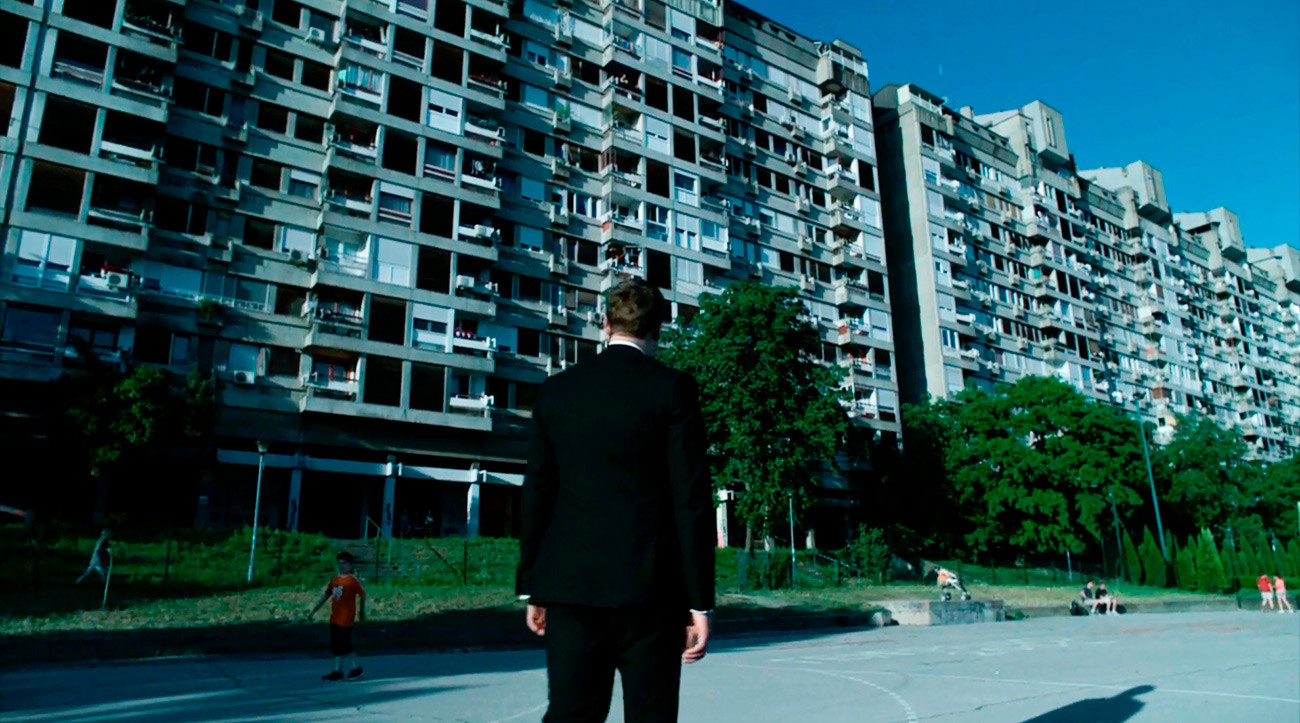 McMafia's Alex is here to visit his childhood home, but there were no buildings like this in Moscow.

The finale of the recent BBC series about an heir to a London-based expat family, who left Russia as a child and is forced to become the new kingpin of organised crime, takes place in Moscow… well, sort of. It was filmed in Belgrade, the capital of Serbia. Not a bad choice - Belgrade is somewhat reminiscent of Soviet-era Moscow. The problem is, the series takes place in the present day, and modern Moscow has moved on. 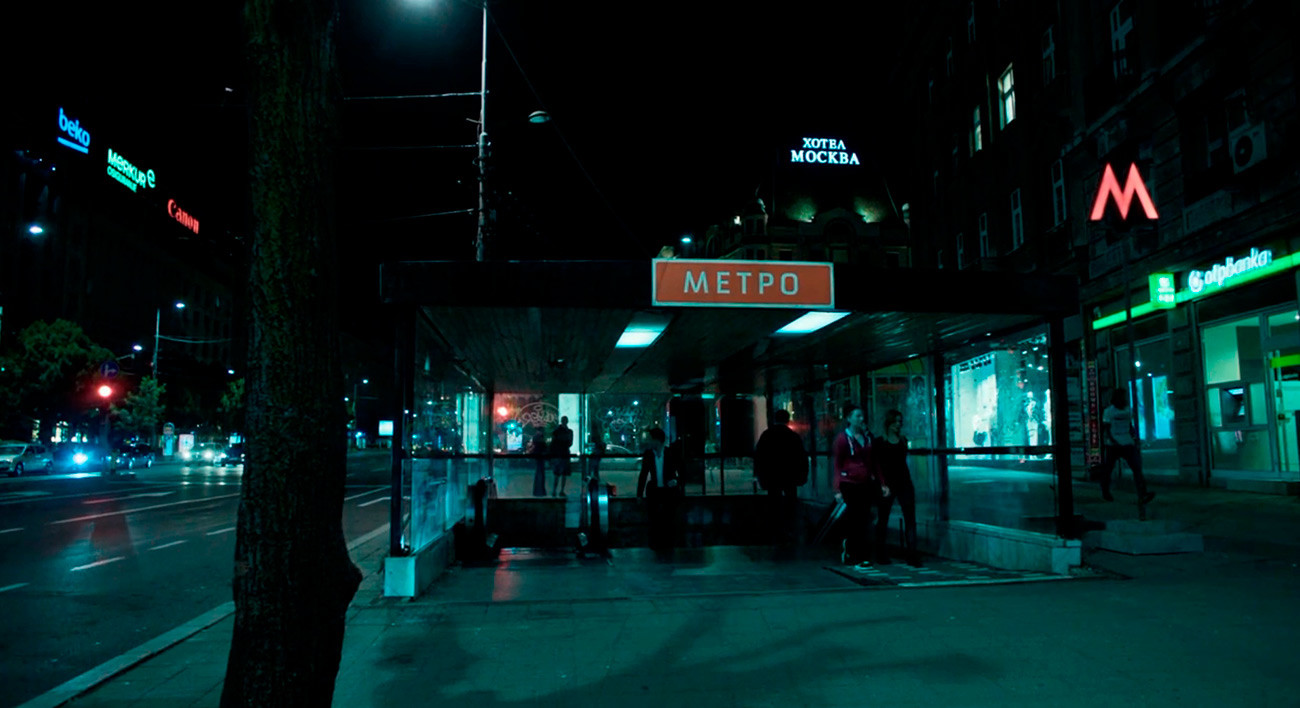 The switch becomes instantly clear once the characters descend into the subway that looks way too archaic, while the big ‘M’ logo and turnstiles are all wrong. Later, when Alex visits a residential neighborhood to purportedly look around his childhood apartment, it gets worse. The style and type of the building and those around it is not the sort that can be found in Moscow, nor could be found at the time when the character would have been a child. 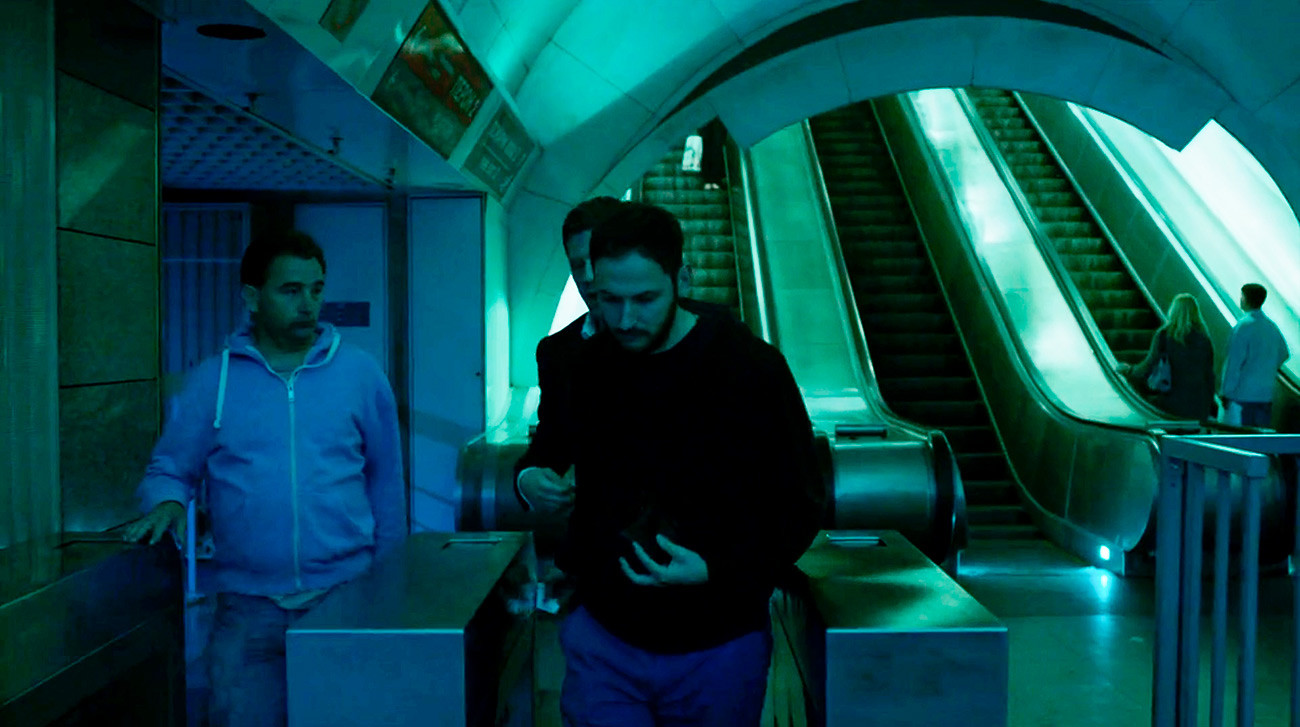 Once in the metro, Alex piggybacks behind a commuter through the turnstiles 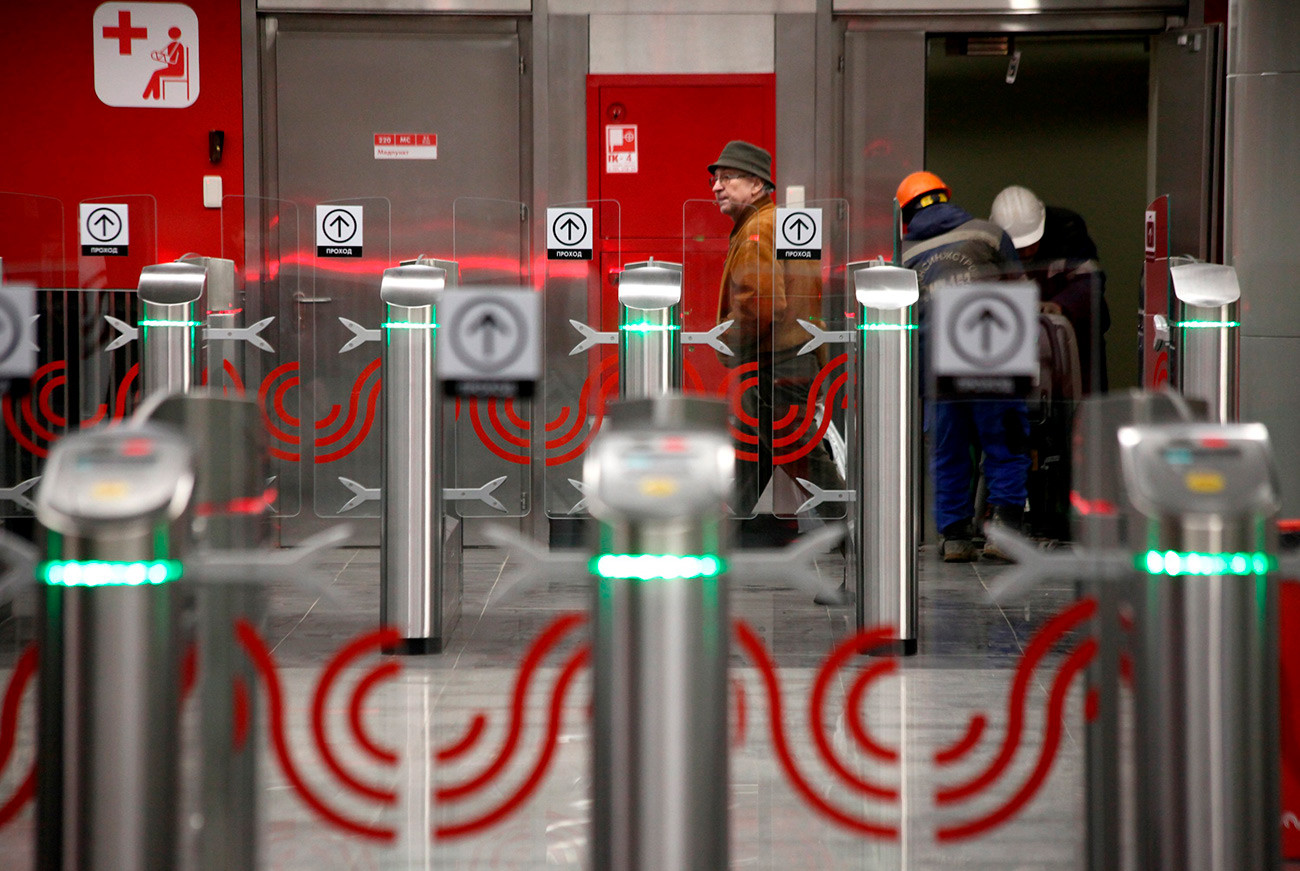 Some panoramic shots of real Moscow were used in the show, and some locations in Zagreb, Croatia - the country in which most of the show was actually filmed - also occasionally stood in for Moscow. 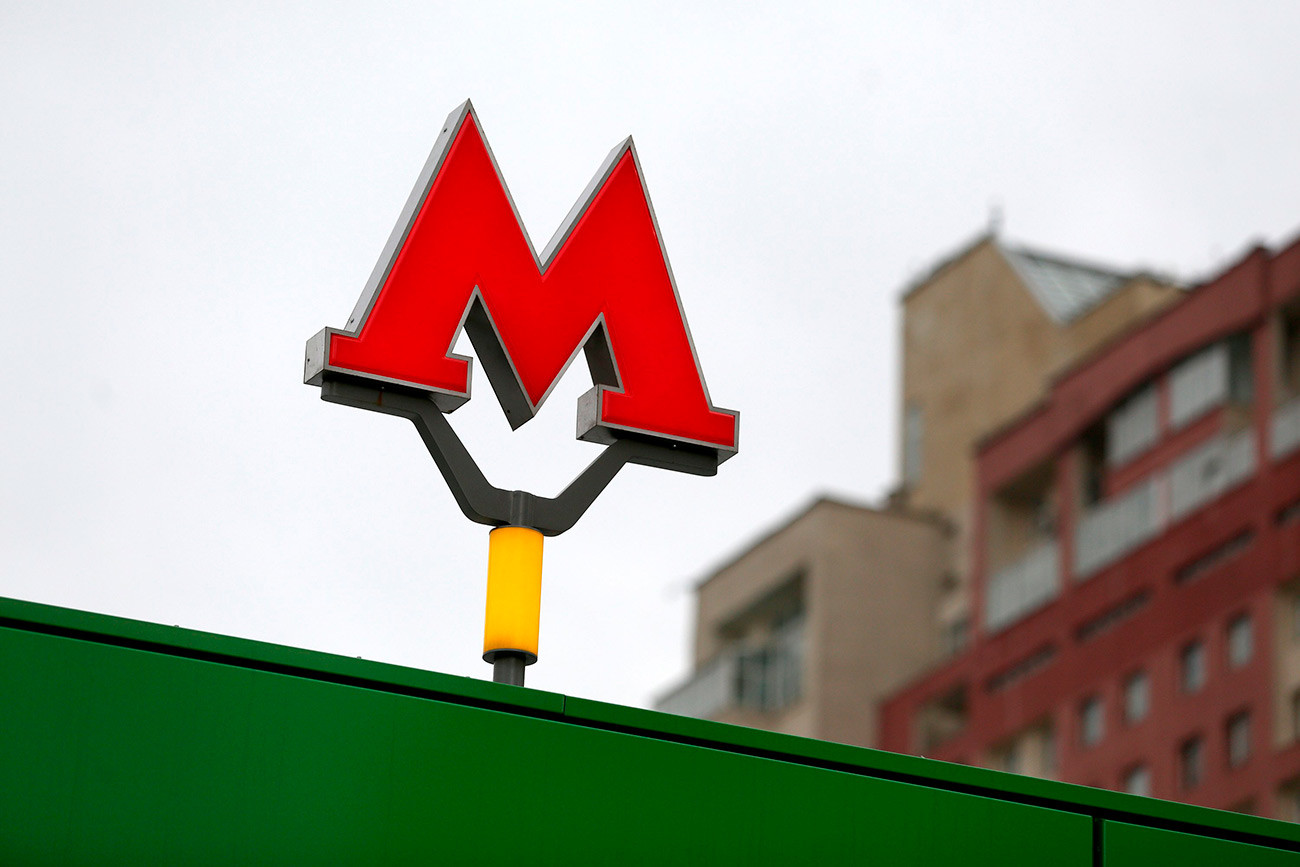 The scenes set in Moscow in season 7 were filmed in Budapest, Hungary.

The alleged headquarters of the ‘GRU’ (the abbreviated former name for Russia’s military intelligence branch) in the show are located in a historic building downtown that looks antithetical to being “the most secure location in Russia” that the screenwriters talk it up to be. People walk on its outside ledges and barge in through windows. The real headquarters were purpose-built in recent years and a bit more menacing, as you can see – that sort of behavior wouldn’t cut there at all! 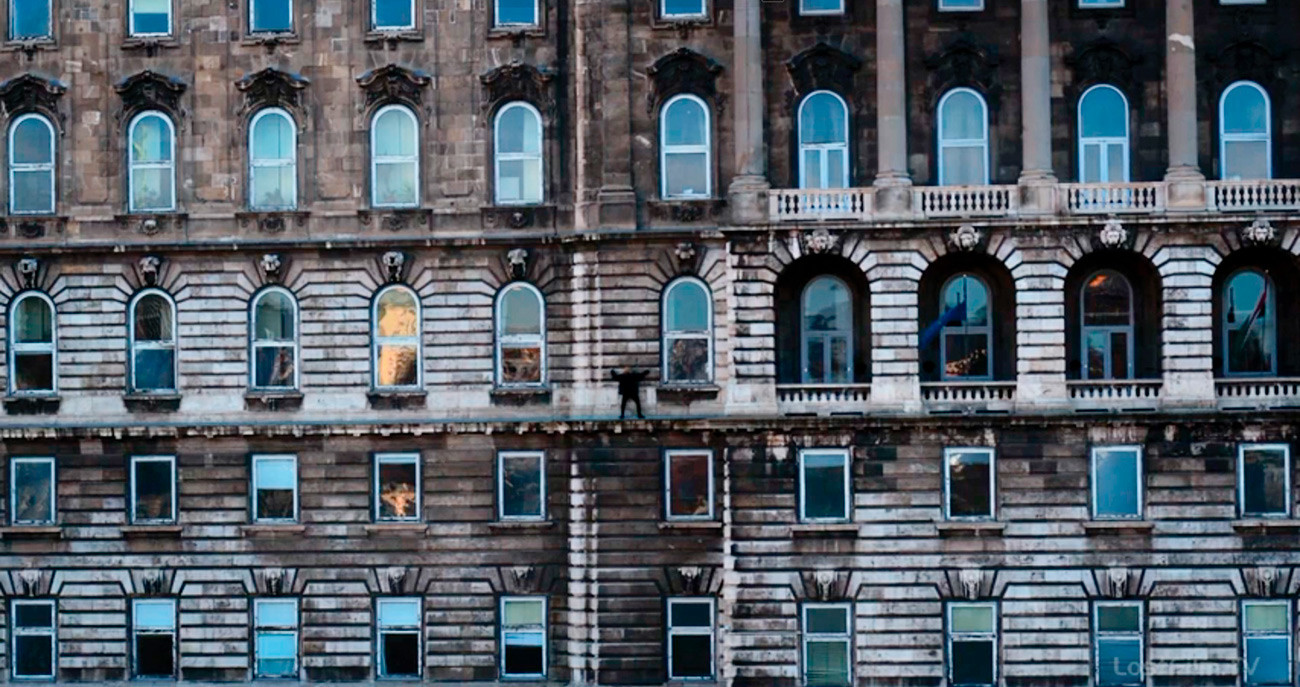 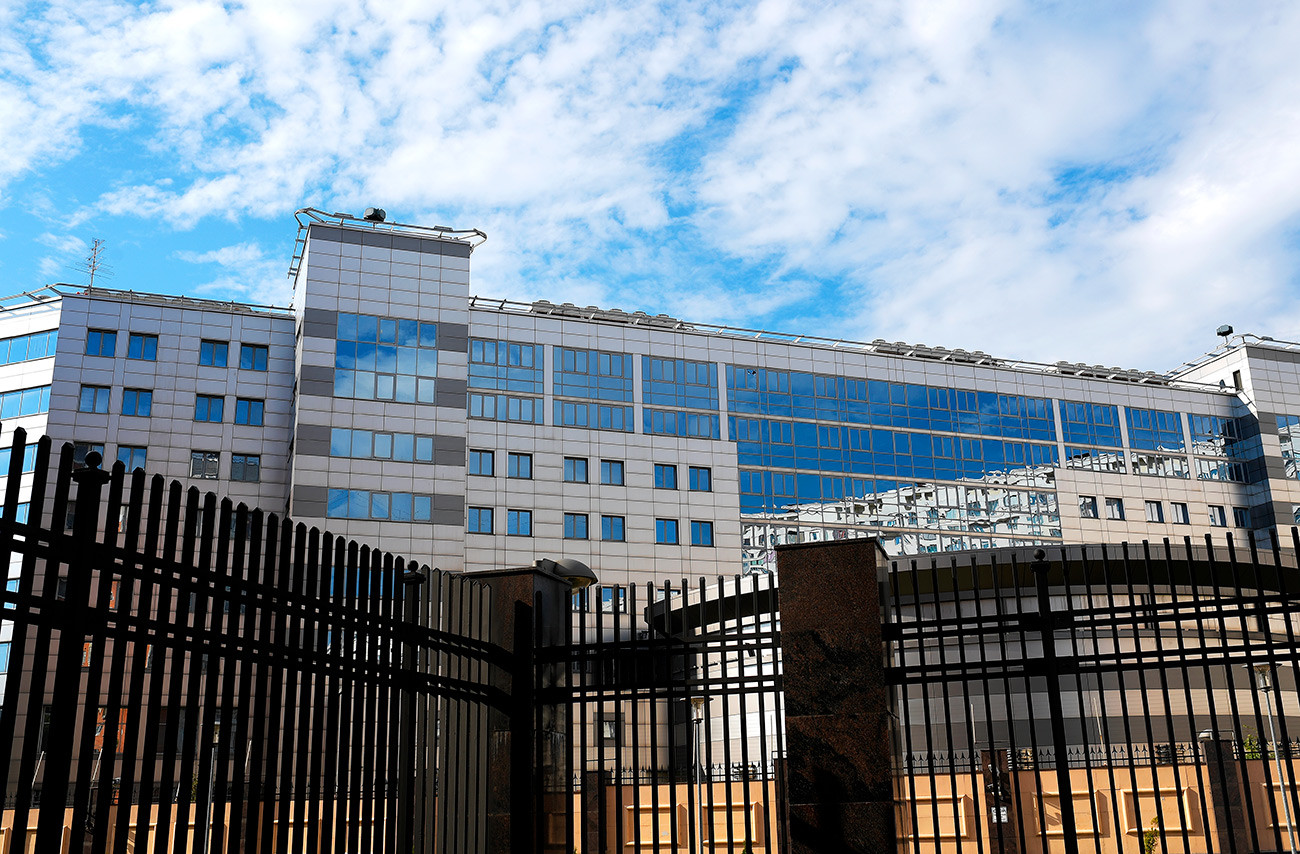 The real headquarters of The Main Directorate of the General Staff of the Armed Forces of the Russian Federation (GU) referred to in Homeland by the abbreviation of its previous name, GRU

Many Russians remarked with disbelief at the confused license plates in the supposed Moscow episodes, that were either Hungarian or appeared to be a purposely jumbled nonsense. 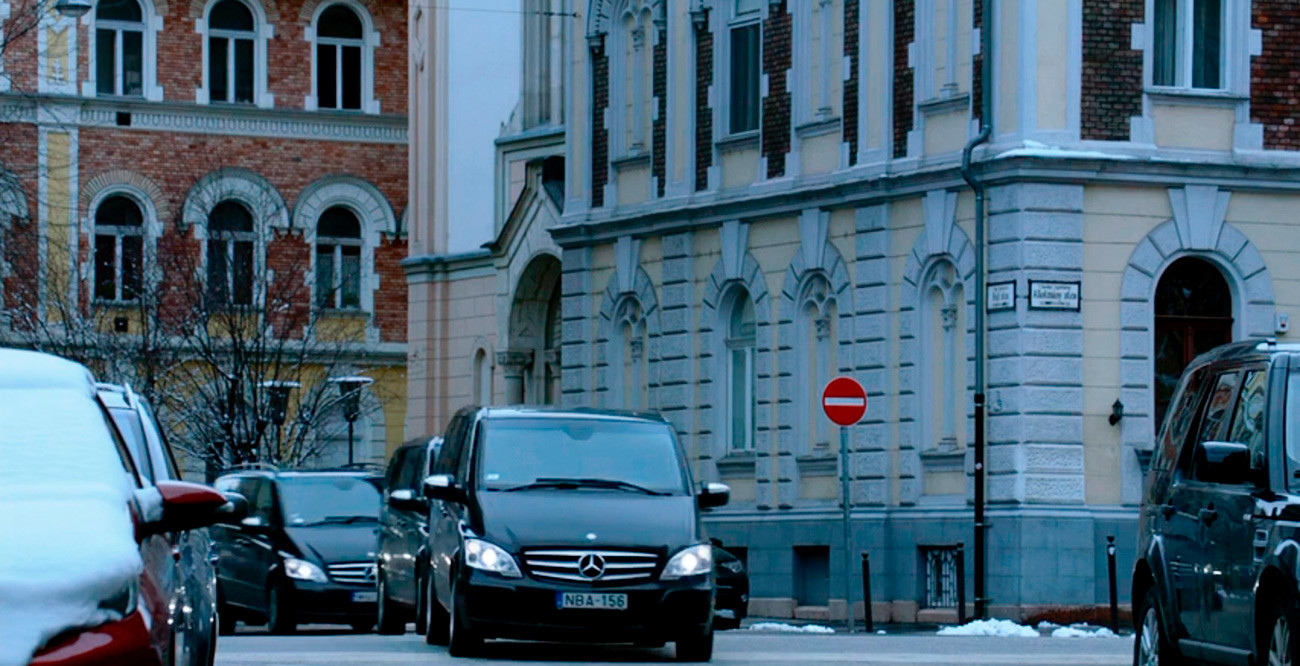 This is a Hungarian license plate, and Budapest street signs are visible on the corner of the building

This license plate was made to look sort-of Russian, but there are too many numbers

Homeland is notorious for switching locations. Its earlier Lebanon storyline was filmed in nearby Israel, and Afghanistan in the upcoming season 8 is rumored to be set in Morocco.

Although some of the Russian fans of the show would say they were “not offended” by its portrayal of Moscow, it is not Moscow - the street scenes were filmed in Bucharest, Romania. And the alleged “Russian prison” was actually just a disused prison in none other than the United Kingdom. 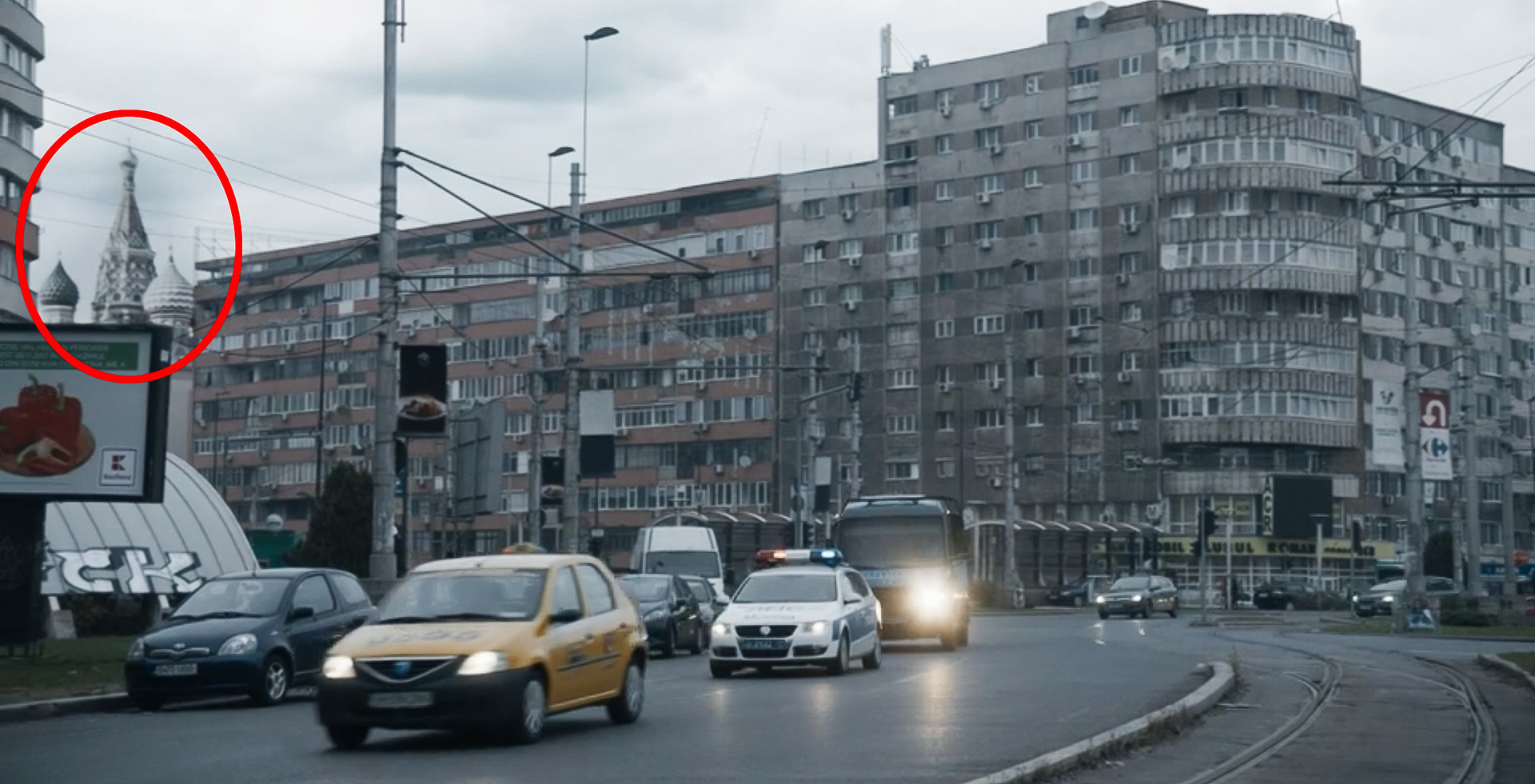 This scene from Killing Eve is pure Bucharest, complete with license plates and adverts in Romanian - but Moscow's St. Basil's Cathedral was edited into the background to make it look more like Moscow

The blockbuster movie, a lot of which supposedly takes place in Russia, was filmed principally in the United Kingdom, and many of the locations in the movie that were, supposedly, Russia, are actually… in London! This includes the Russian villain’s headquarters, and a scene in what was supposed to be a Russian Orthodox Church - it’s filmed in a Catholic Church, London’s Westminster Cathedral (not to be confused with Westminster Abbey). Liverpool city center doubled as the rest of “Moscow”.

Jack Ryan meets the antagonist, ostensibly, in the Russian Orthodox Cathedral of Christ the Savior in Moscow 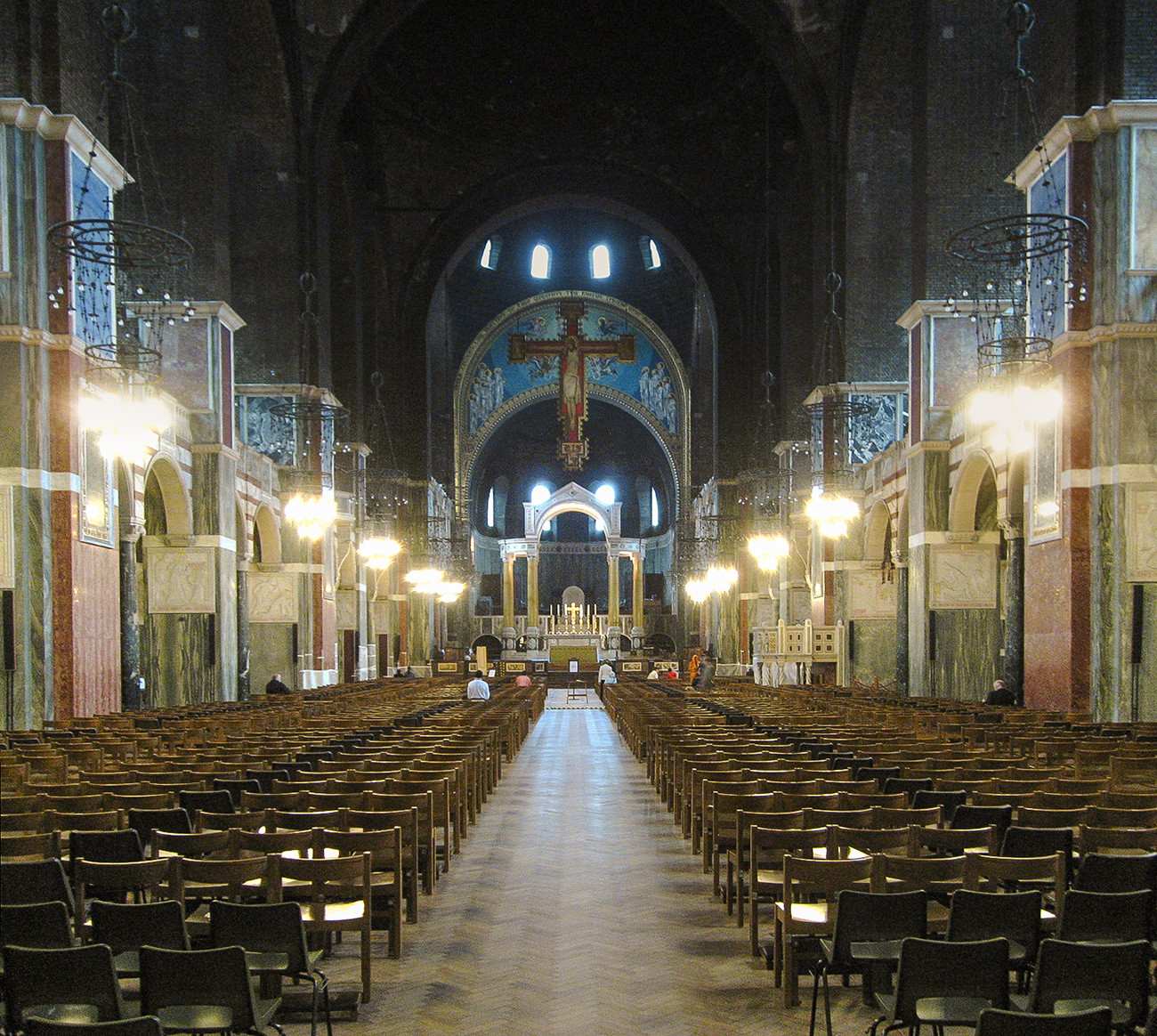 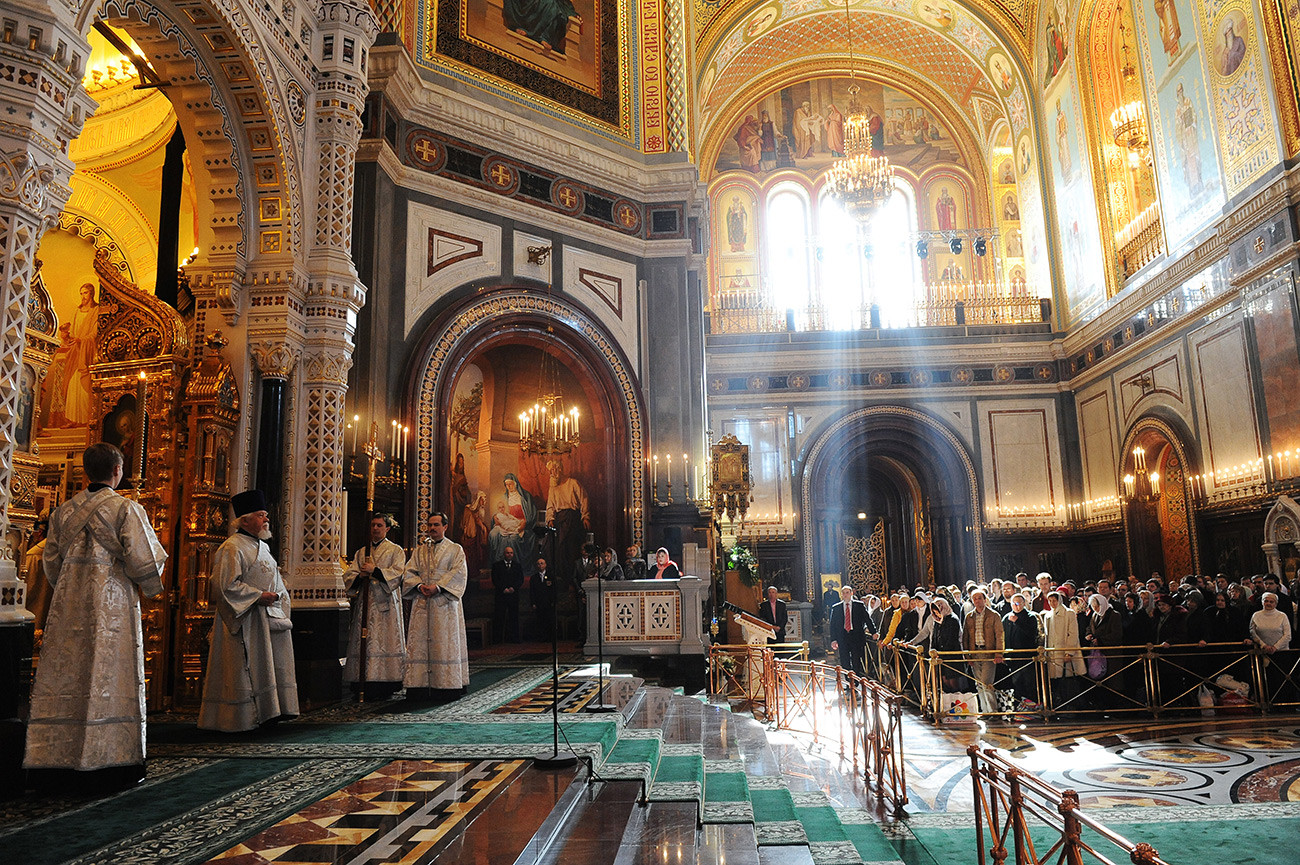 This is what Cathedral of Christ the Savior actually looks like on the inside - aside from having the seats removed, a detail that the show got right, a Russian Orthodox church would have icons on display

Some parts of the multi-award winning HBO show were actually filmed in Ukraine - where many of its events take place in reality. Its principal filming location - what was acknowledged to have been for financial reasons - was in Lithuania. The country’s second-largest city, Kaunas, stood in for 1980s Moscow. But portraying Russia’s capital 30 years ago was fraught with difficulty - whether or not Kaunas looks the part, neither does today’s Moscow.

Kaunas does have areas with Soviet-era architecture, and some Lithuanian homes would still retain elements of typical Soviet living conditions. But this is also one of the areas in which the series falls starkly short of realism. Its protagonist, academic Valery Legasov, once director of the all-powerful Kurchatov Institute, appears to share the squalor of common people’s living conditions in an old, dilapidated building - in which he also kills himself in the opening scene of the show. 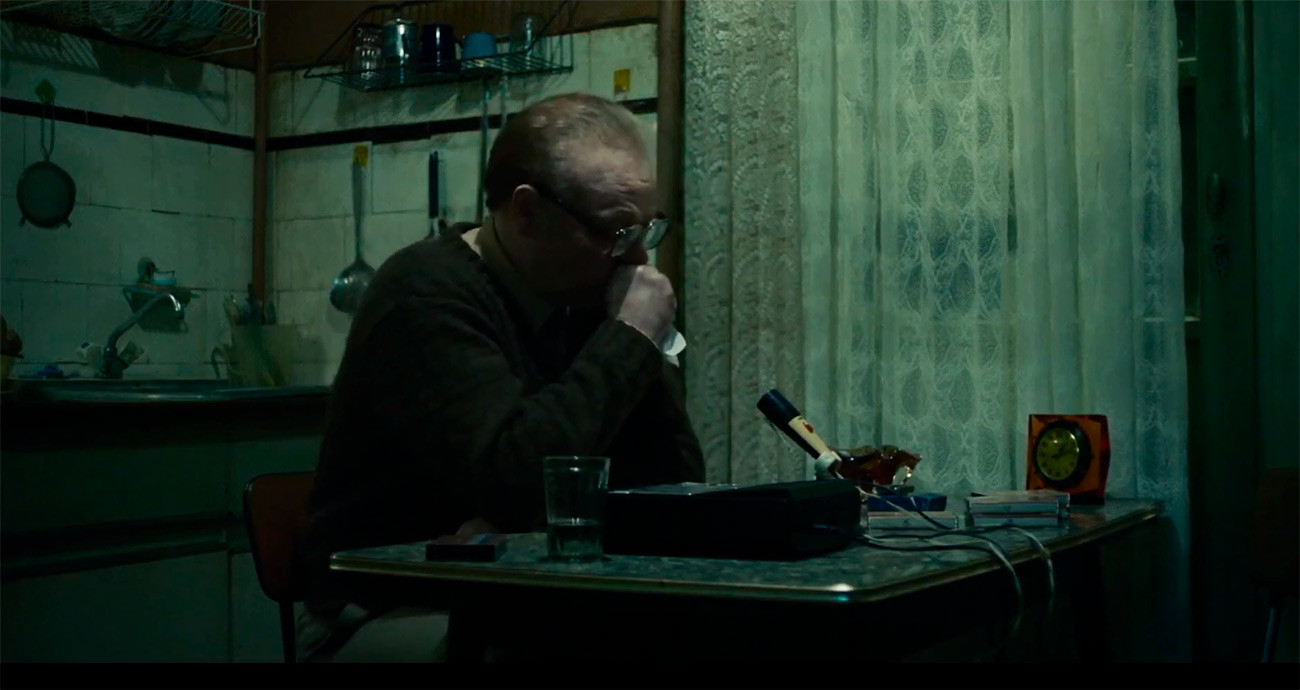 The squalor of fictional Legasov's kitchen would have been uncommon for any Moscow home, and improbable for a person of his social status

The real Legasov lived - and died - in a vast two-story single family home in the Schukino area of Moscow, not far from the Kurchatov institute. Built in the neoclassical style of the Stalin era, it was an exclusive residence by Soviet standards. The descendants continued to own the house in the post-Soviet era. 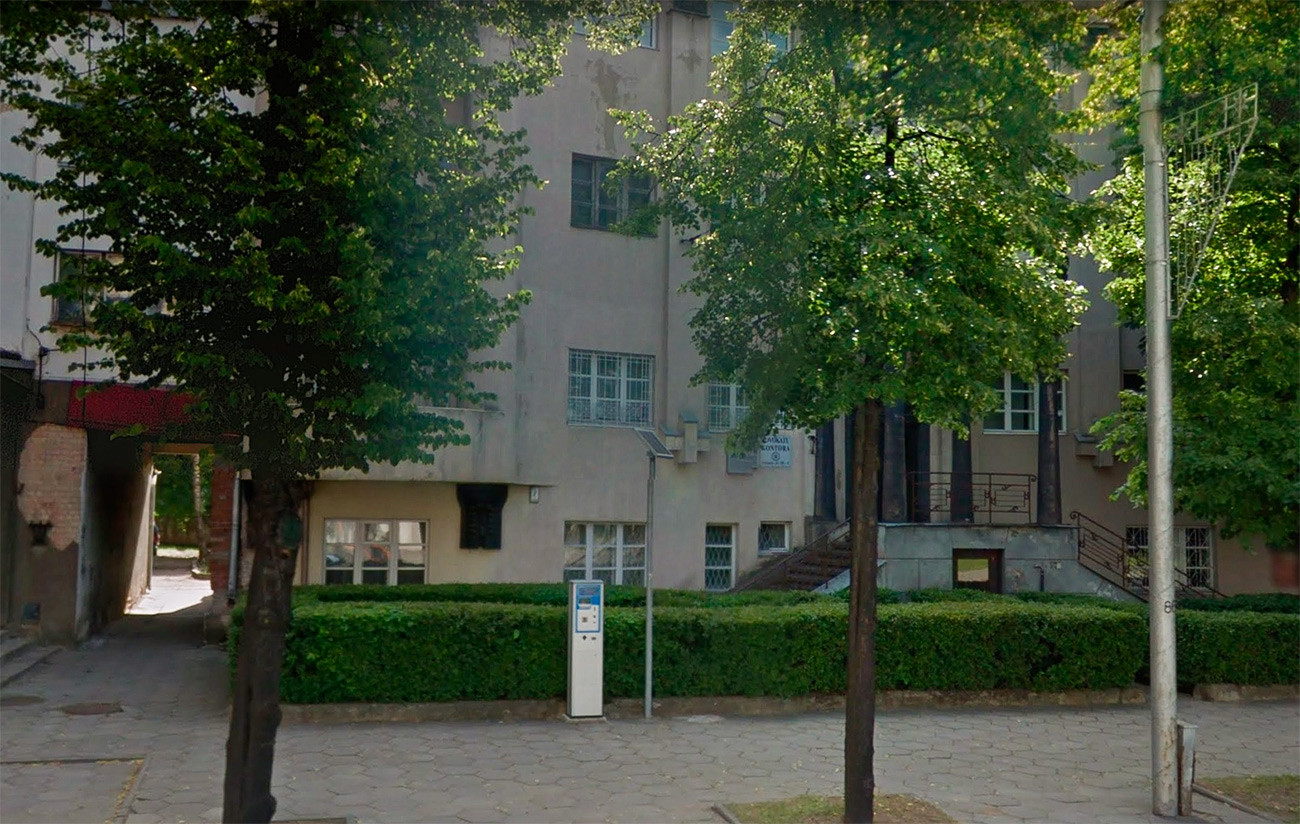 Vitauto pr, 58 in Kaunas was used as Valery Legasov's home 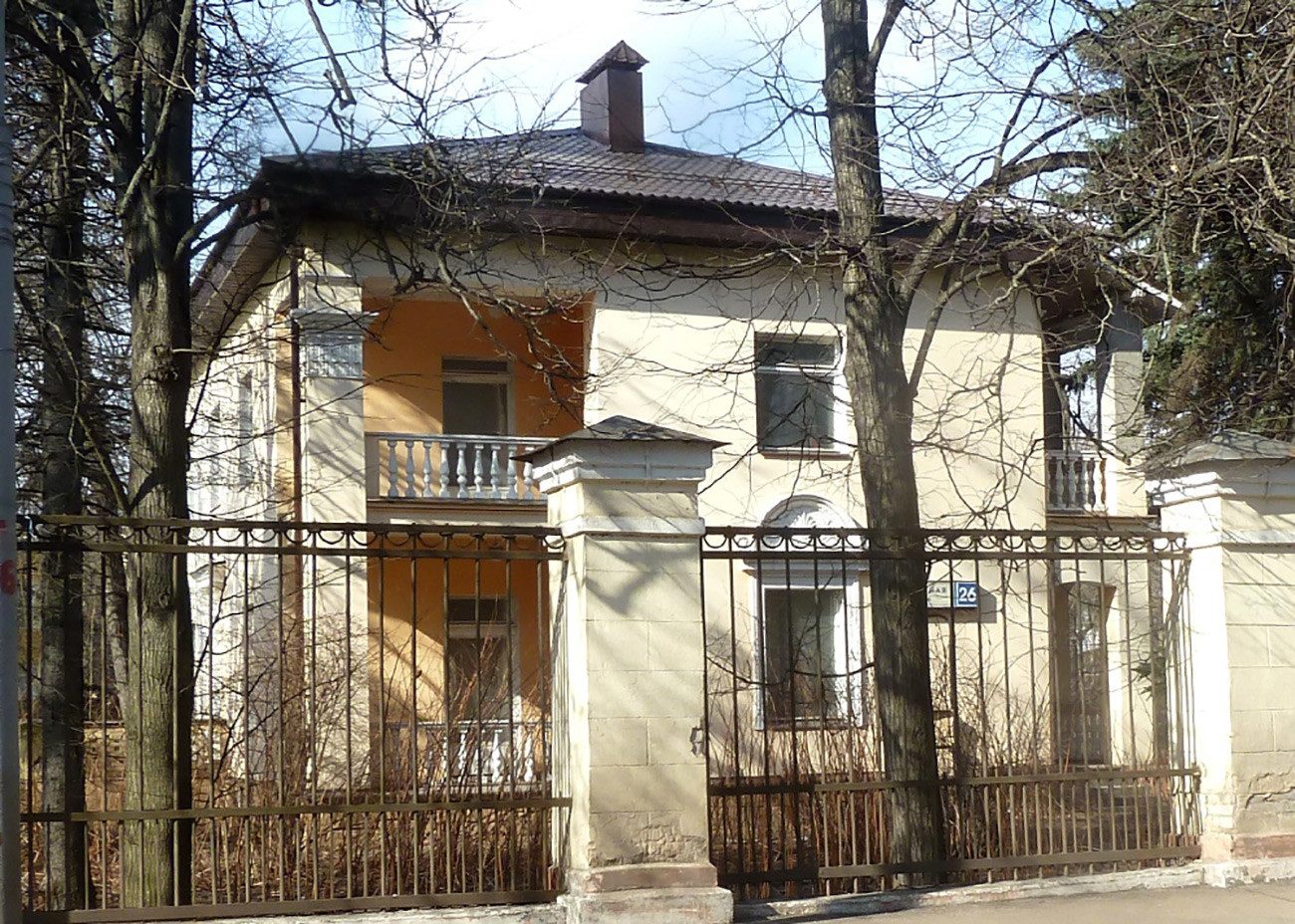 So how did Legasov hide the tapes of his recollections from the KGB behind a removable brick in the wall then, the devoted viewers will ask? He didn’t. He left the tapes in his office at the Moscow State University, addressed to his friend - the editor-in-chief of Pravda newspaper.

In the film’s finale, James Bond travels to Kazan, Russia to settle a score. The snowy drab-looking barracks used were actually a disused military site in the United Kingdom.

Although covered in snow for Quantum of Solace, Albershot military barracks did not look like Kazan to many Russians. 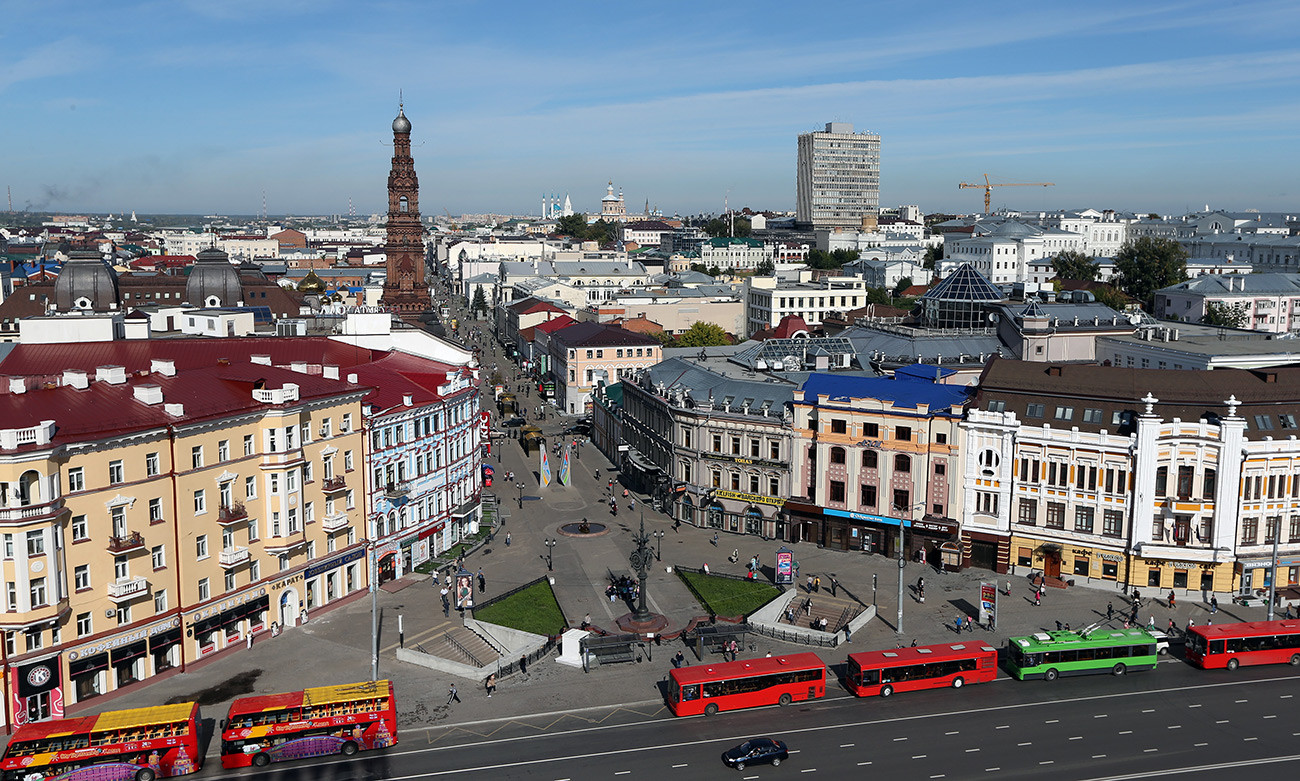 Residents of Kazan, Russia are more likely to recognize their city in this real photo

As you can probably guess, the scene in which Tom Cruise apparently blows up the Kremlin was not filmed anywhere near the Kremlin. This was filmed on set. The filming locations of most of the street scenes, as well as indoor locations of the would-be Kremlin, were in and around Prague, the capital of the Czech Republic. The runners of the multi-million dollar franchise complained that actual Moscow was too expensive to film in, compared to the Central European city -- however, they did film some of the panoramic shots in Russia, including those of the Red Square and the [intact] Kremlin. 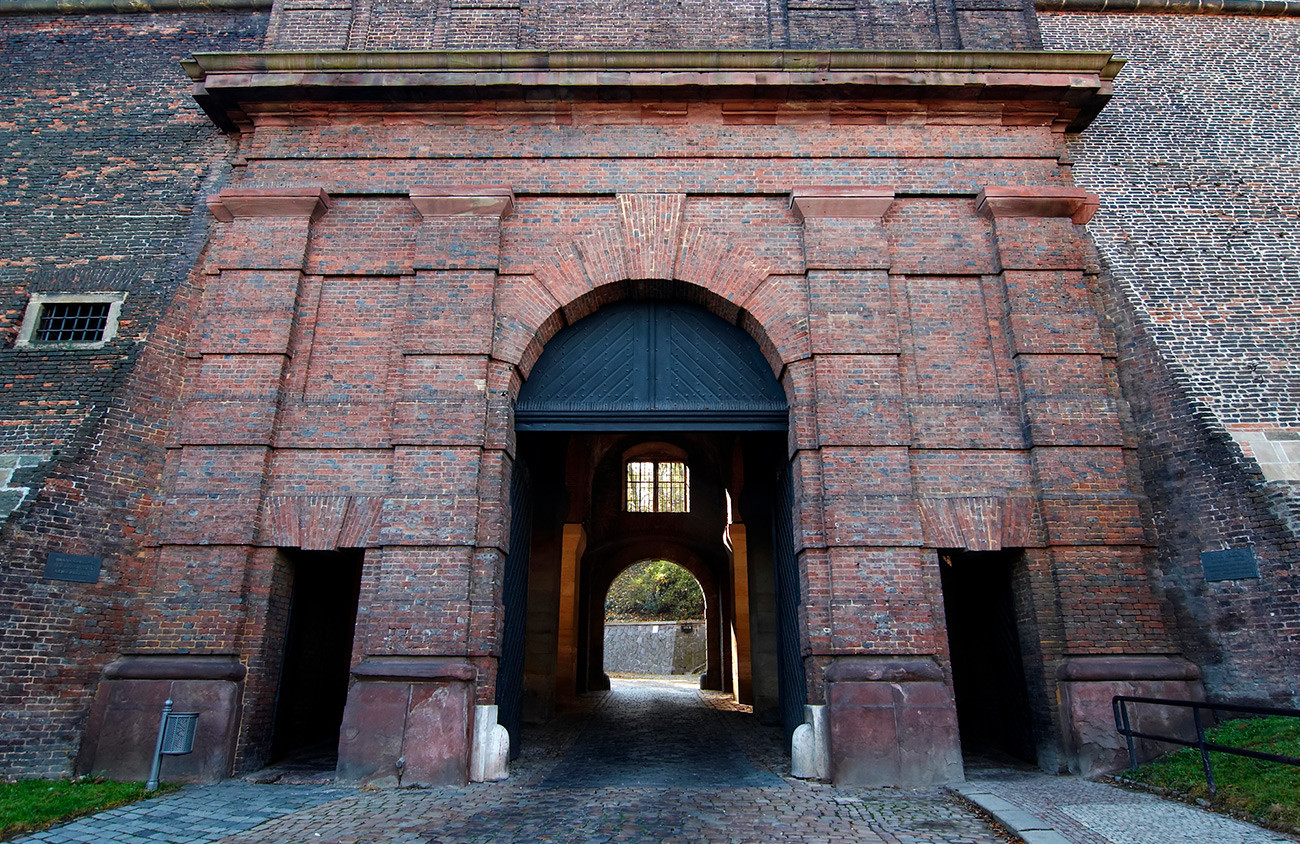 Vyšehrad in Prague, used as Kremlin entrance, is somewhat pale on the outsie compared to the original

As Tom Cruise walks away from fictional about-to-explode double of the Kremlin, the parked cars bear decidedly non-Russian license plates 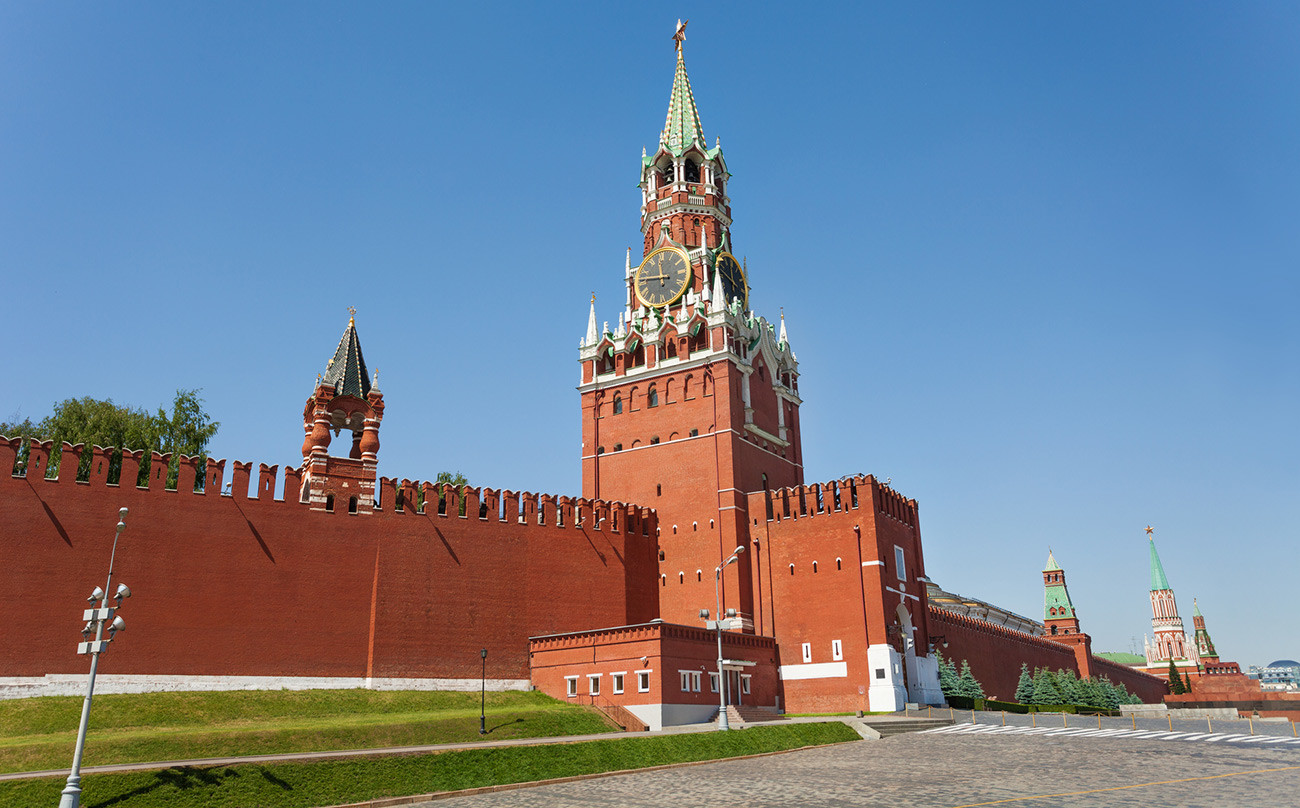 The real Kremlin, seen here from the same angle, is brick-colored and thankfully still in one piece

A Good Day to Die Hard

The fifth installment of the Die Hard series was widely rumored to be filming in Moscow, but those turned out to be premature - the producers apparently scouted Moscow locations and tried to make it work, but couldn’t, citing it was not feasible. They did dispatch a secondary crew to film a few things, including panoramic shots and the Ukraine hotel from the outside. Principal filming was moved to Budapest, Hungary, that stood in for much of Moscow in the film. 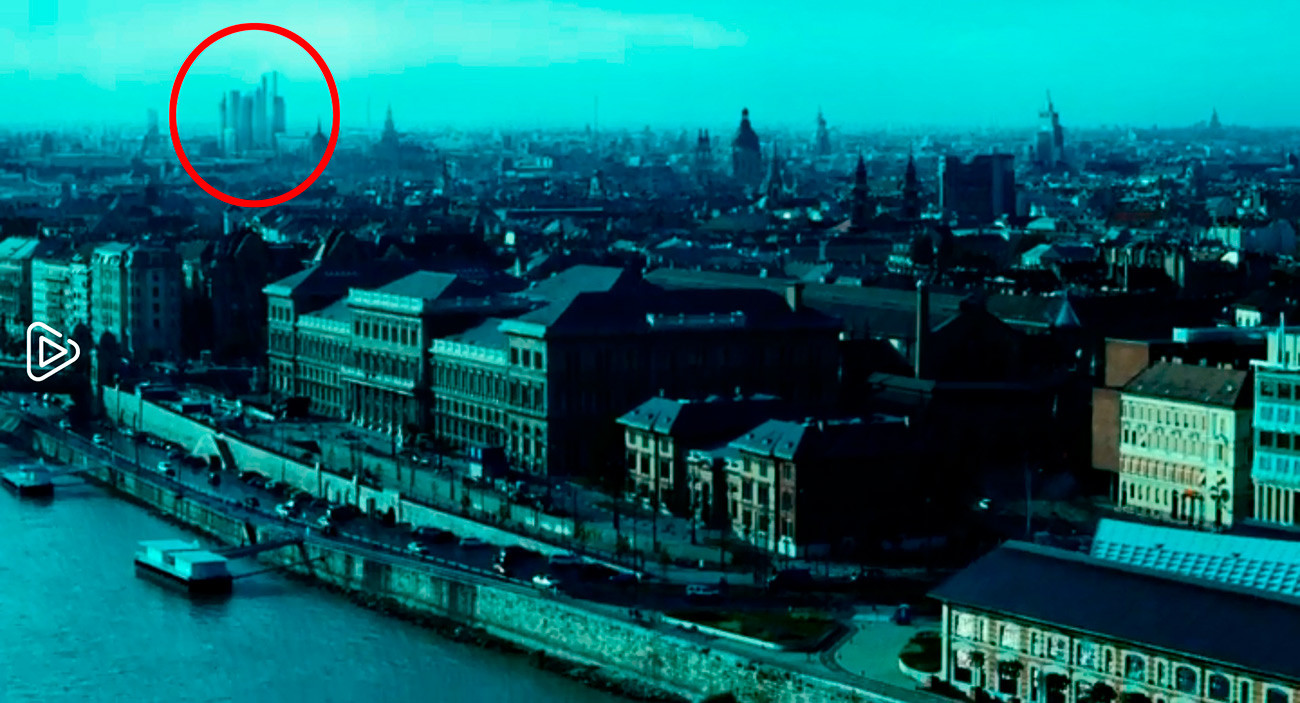 This panoramic view of Budapest, with Corvinus University of Budapest at the forefront, was made to look more like Moscow by editing the image of Moskva- City business district into the background 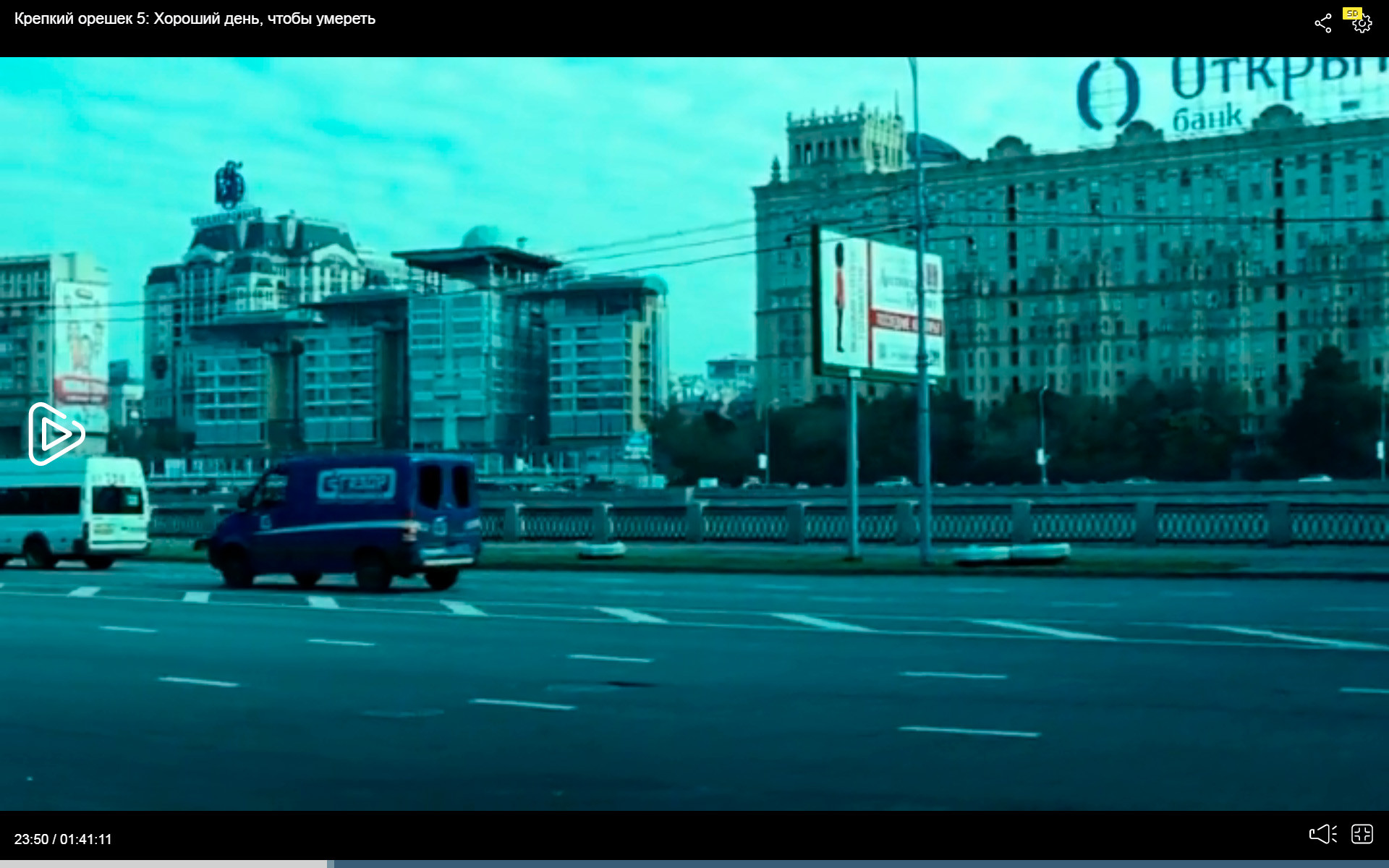 This, however, is a genuine view of Moscow, featuring the British Embassy on Smolenskaya Embankment

In this movie, Chernobyl was also filmed in Hungary, just outside Budapest - perhaps that explains to the skeptics how the characters managed to arrive there about 30 minutes after leaving “Moscow”! Otherwise, it is supposed to be in a different country and hundreds of miles away, a fact the movie quite casually ignores.

Some part of the zombie franchise’s final installment takes place in “the simulation” of Moscow, and background scenes for it were partly filmed in real Moscow. However, much of what ended up in the movie is, indeed, a computer simulation, where the position of buildings and the location of Arbatskaya metro station do not match reality. License plates on the cars are all “funny”. The crew were permitted to film some background scenes in the actual Moscow Metro subway, and the contours of Arbatskaya (line 3) station into which the characters plunge in their car, were based on the real ones. The principal metro station scene in an adjoining station was apparently later shot in…. Toronto, Canada!

The scene in Resident Evil - Retribution, that appears to be taking place in Arbatskaya metro station on line 4 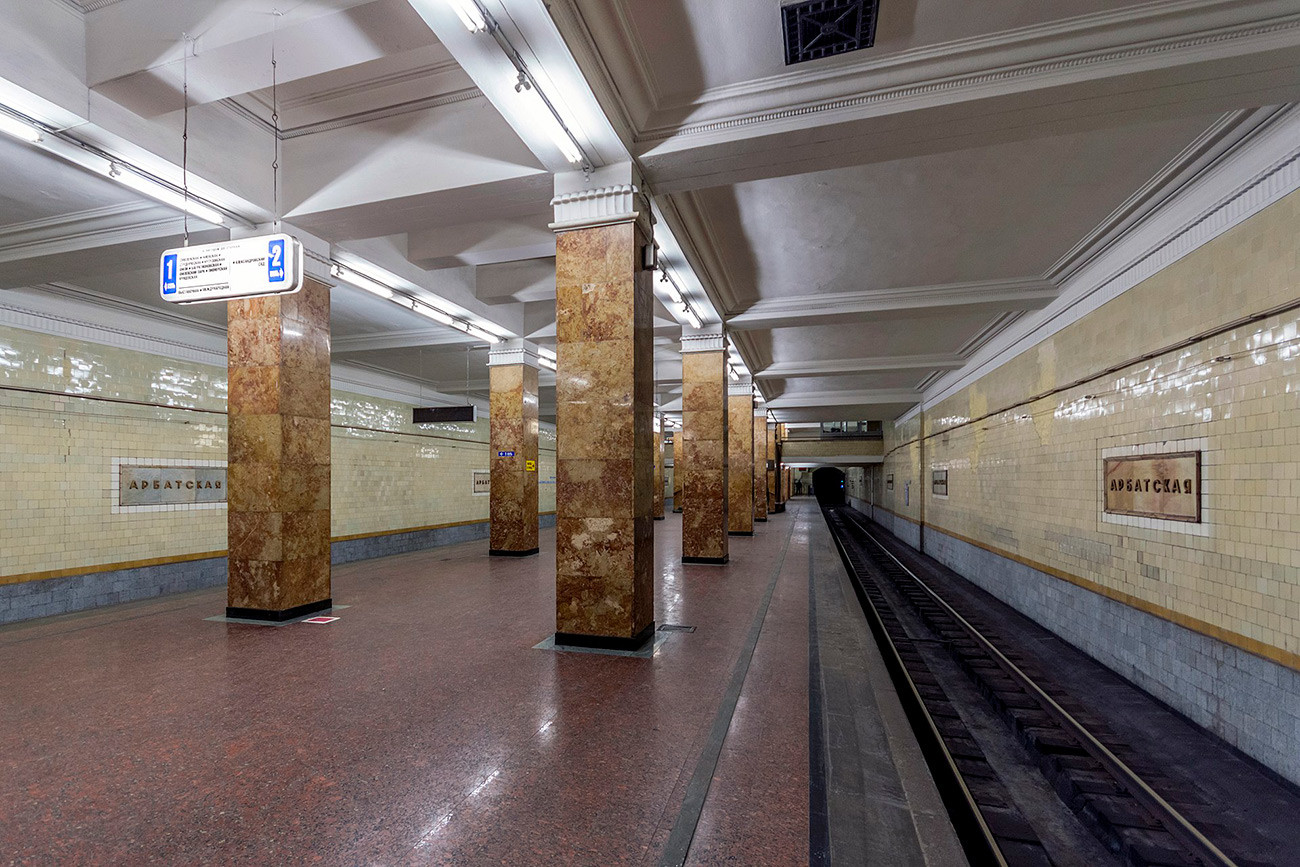 The James Bond classic with Pierce Brosnan spared no expense in its famous “tank chase scene” in Leningrad (now St. Petersburg). Most of the shots of the city in the scene are real and were filmed on location with a real tank, although understandably some of them, where most of the destruction occurs, were filmed on a reconstructed set.

Pierce Brosnan filmed the tank chase scene on location, and drove an actual tank - but the most destructive bits, like this one, were filmed on set 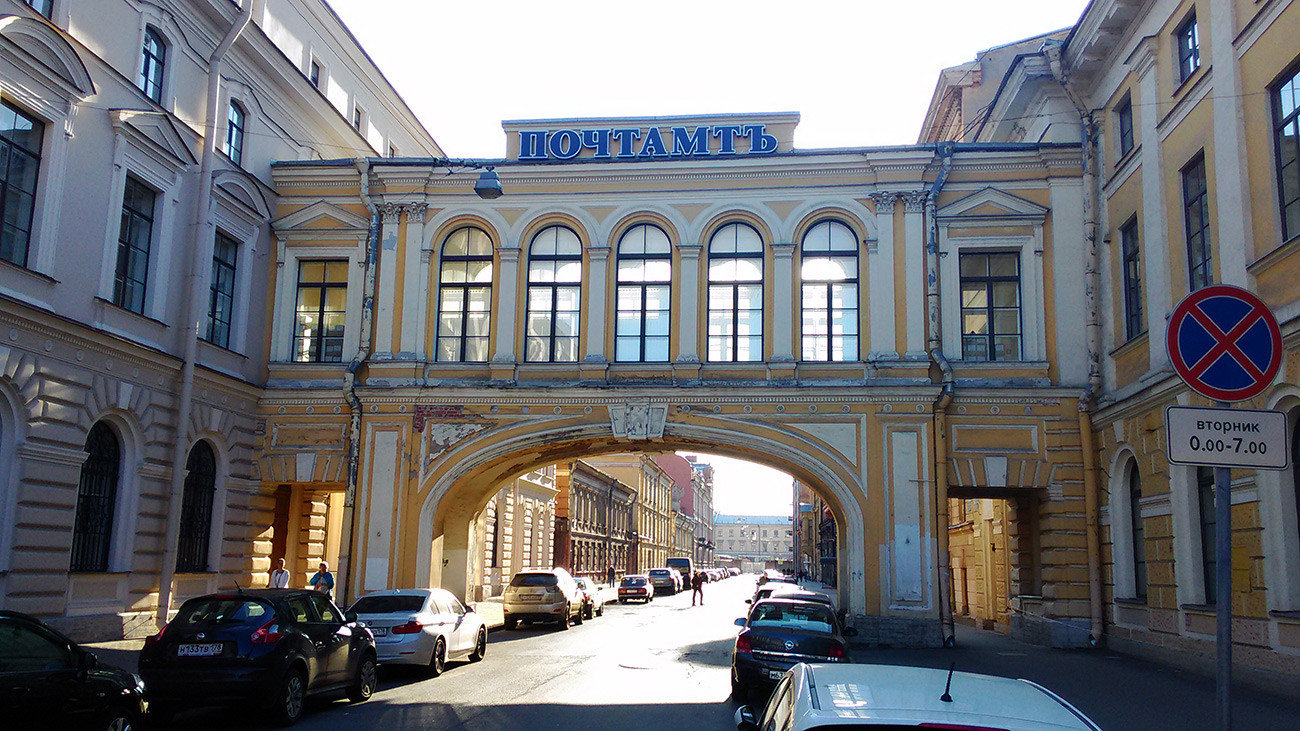 The actual Post office arch in St.Petersburg, through which James Bond, thankfully, didn't drive a tank. It is wider and has an extra window on each side.

This installment of Matt Damon’s action franchise is almost unique in that the Moscow-based scenes were actually filmed on location - in Moscow! The car chase features believable ambience and actual Russian cars - although, that was sixteen years ago, and today’s Moscow no longer has these Volga taxis. 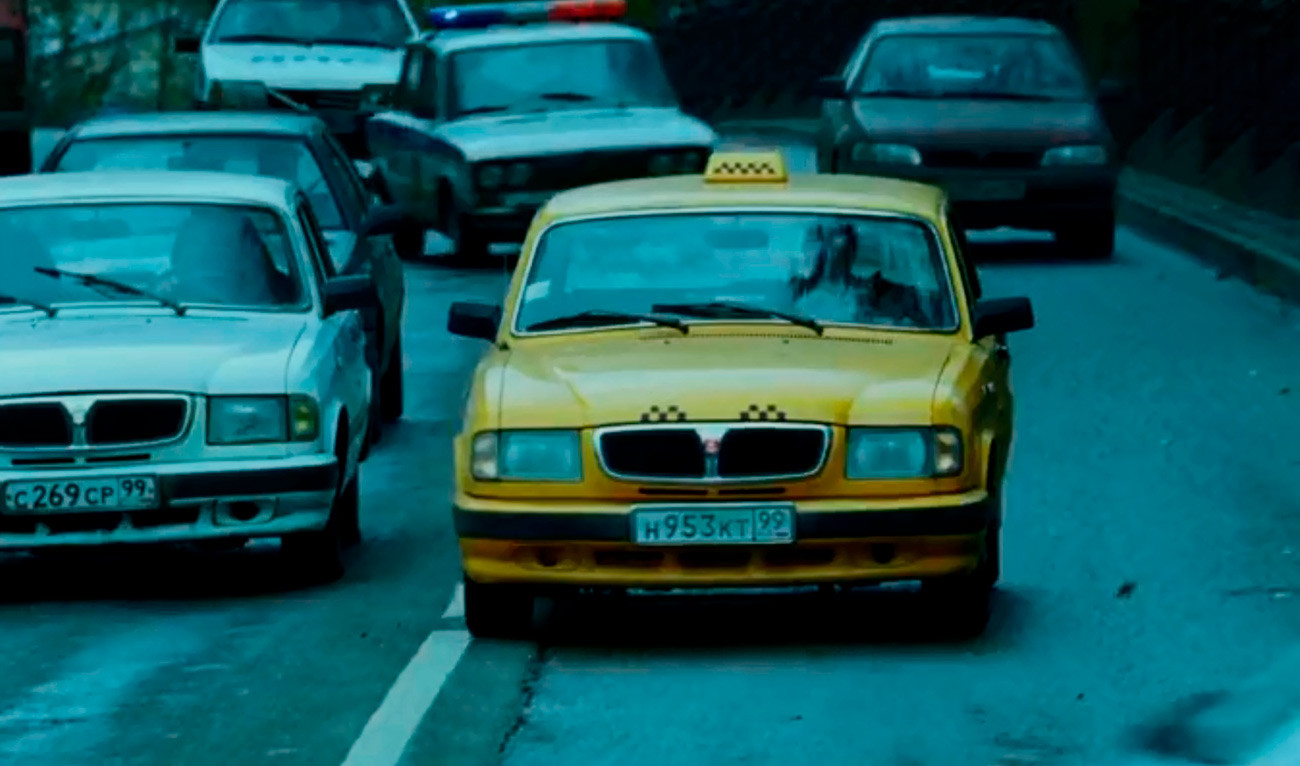 In 2004 Bourne Supremacy, Matt Damon is chased on real Moscow streets in a real Moscow taxi - but there aren't any more of those today 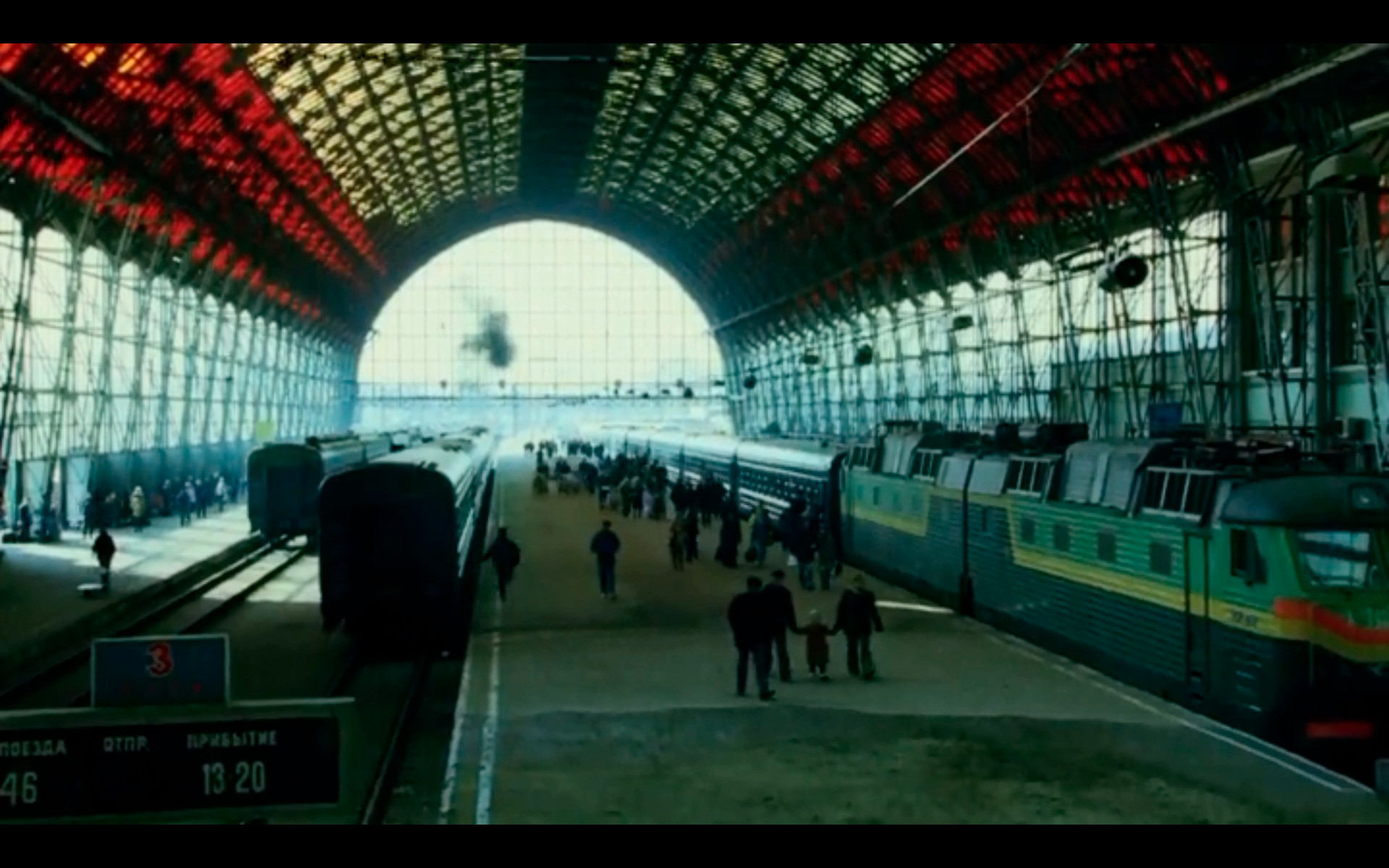 The real Kievsky Railway station where Bourne arrives circa 2004 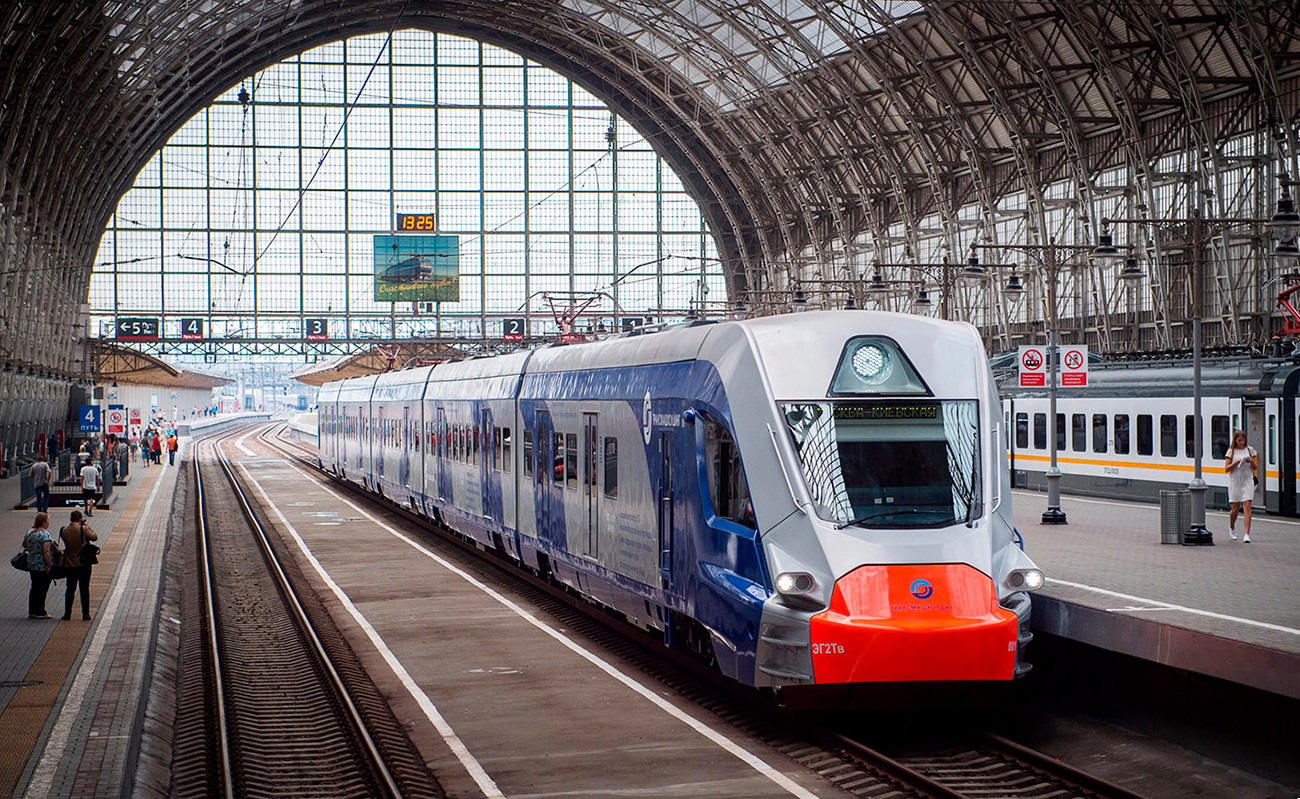 Even more endearingly, the scene where Bourne visits a high-rise residential neighborhood is genuine, filmed in the Krylatskoe neighborhood in the West of Moscow.

While many Russians will have much to say about the realism (or not, as the case may be) of the show about Russian spies overall, Moscow as it appears in Season 5 is real. It was, of course, shot now, so real present-day Moscow in the show plays the part of itself 30 years younger. In some media interviews, the producers reminisced about the difficulty of finding places that look old and unaltered enough that they pass off as the 1980s. 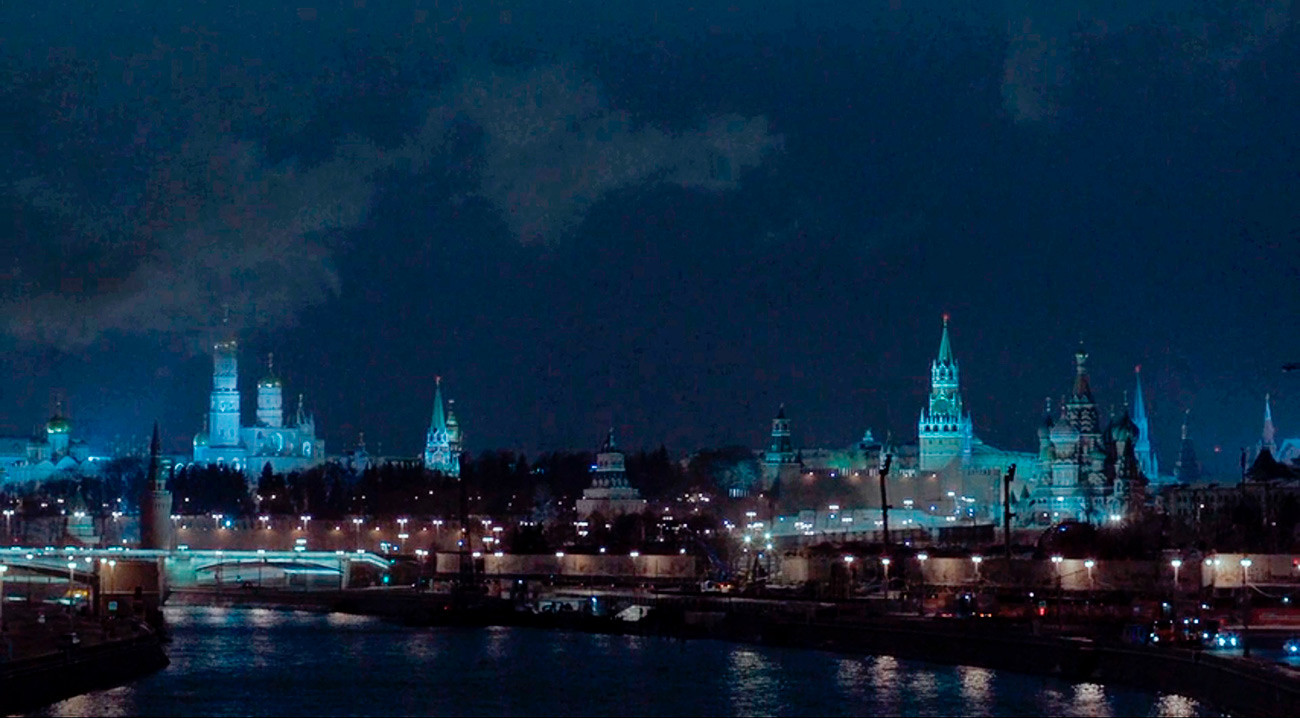 This panorama of the Kremlin in the Americans is authentic - yet, until 2010 the massive brutalist Rossiya hotel, since demolished, would have been at the forefront of it