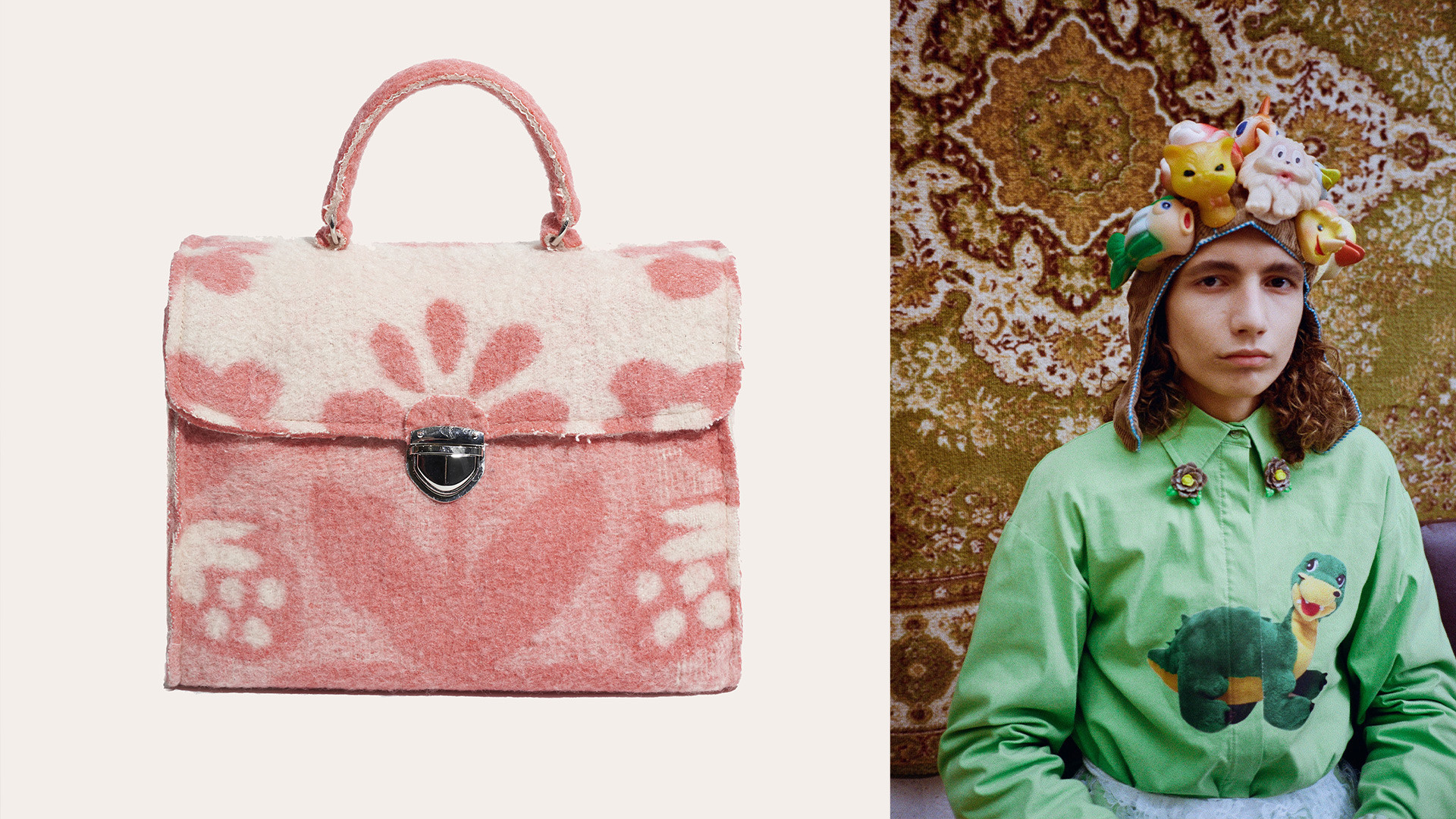 Back in Soviet kindergartens, children had bright, fluffy felt blankets. Over time, they wore out and got chucked away. Now, 24-year-old Russian designer Roma Uvarov is on a mission to recover them, having made them part of a new collection of clothes and accessories that appeared in a shoot for Vogue Russia. 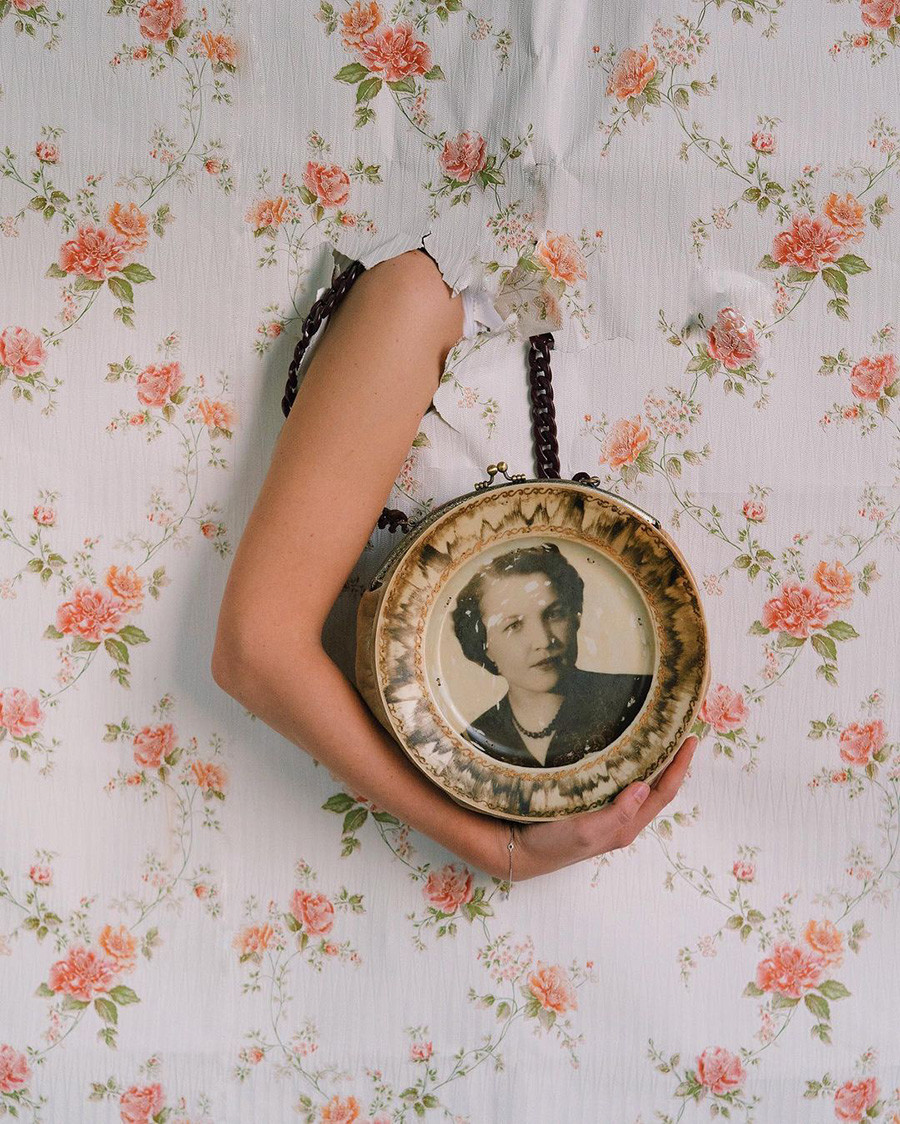 Jackets and sweatshirts were cut out from the blankets, with material too for women's handbags. The result is a matching set of items. A new batch is expected soon, in a different color. Looking at these creations, no one could guess that they originate from everyday Soviet life. Sure, for some, they will evoke distant memories of curd pancakes with kefir and the obligatory “quiet hour” (a great time to play pranks) at kindergarten in the USSR, but for the rest of us, the stylized floral print looks fresh and modern, and the things themselves are worthy of the catwalk. That is in fact where they are usually unveiled: Roma Uvarov Design regularly participates in Moscow Fashion Week, and in January the brand celebrated its fifth anniversary. Roma’s clothes are worn by various Russian celebrities, including TV presenter and ex-presidential candidate Ksenia Sobchak, fashion diva Alyona Doletskaya and pop star Philipp Kirkorov. 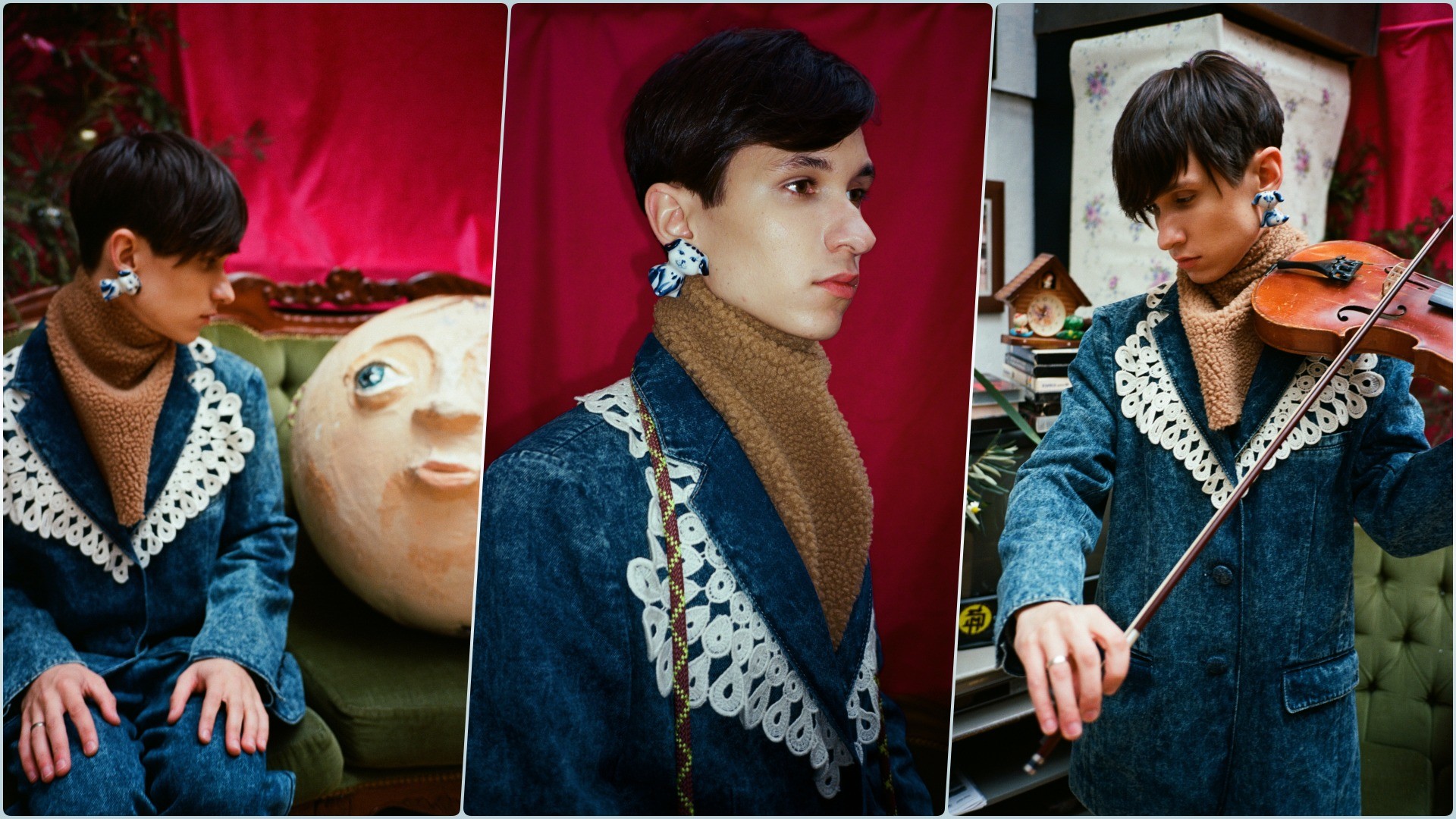 The brand also produces mass-market items, but that is the exception rather than the rule. Most of Roma Uvarov Design’s models are exclusive. It’s all about the raw materials: the DNA of the brand lies in redesigning vintage stuff, of which there is not much by definition. That said, the source material can be anything: from old photographs from a family album and threadbare textbooks found on the ruins of a burned-down house, to the most common household articles like a stack of mailbox fliers.

“Whatever catches my eye I like to turn into clothes,” the designer tells Russia Beyond. “We recycle life, taking and updating the most ordinary things, be it of Soviet or pre-revolutionary vintage, things from the recent 1990s, or even something modern.” 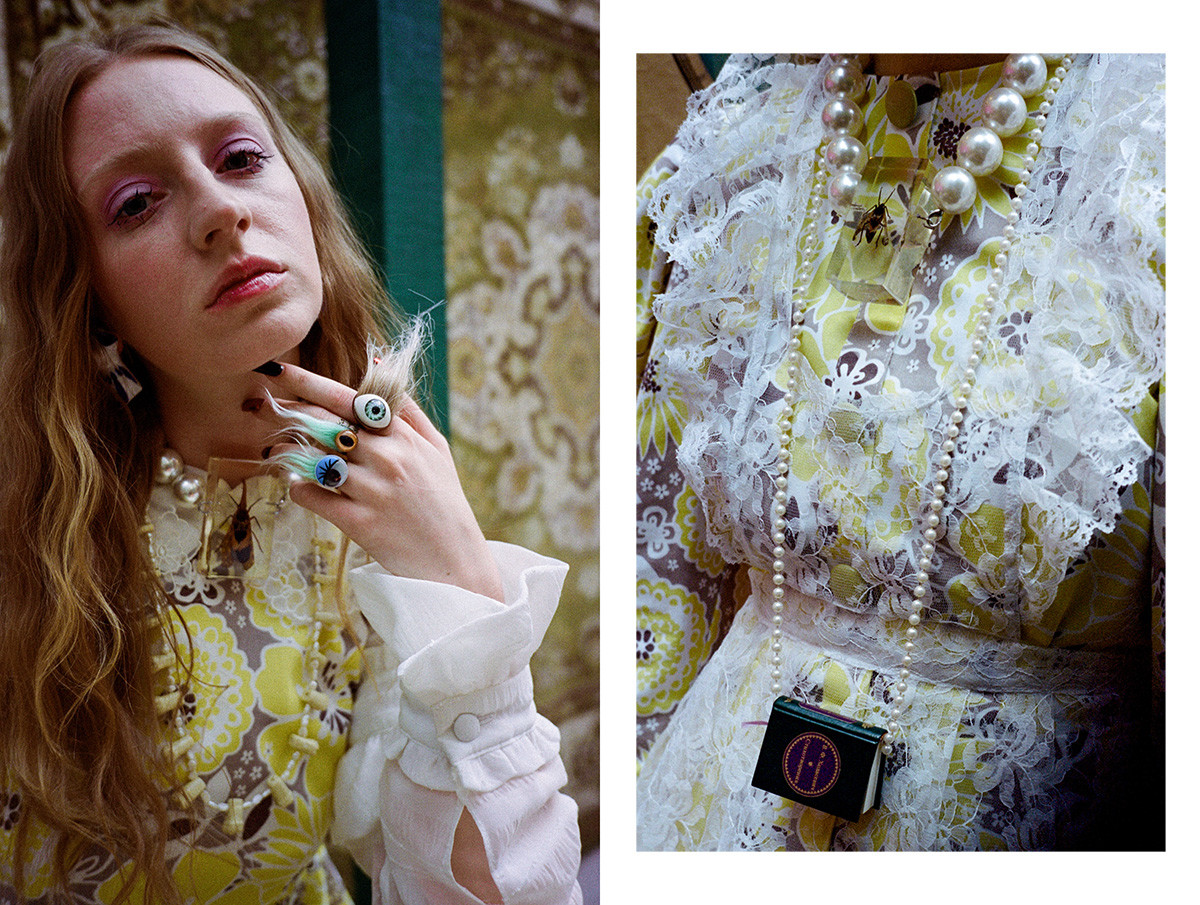 Old aluminum spoons once used in state dining rooms, lace collars (a fashion hit in the 1960s), “granny” rugs, school uniforms — all this is suddenly reborn in the form of snazzy accessories for a bohemian wardrobe. The brand’s latest project is a collaboration with the Russian State Library in Moscow, as part of which the guys made a set of souvenirs (masks, scarves, crackers) based on old catalogs, postcards and advertising posters from the library’s special department for non-book valuables. The crackers, for example, made of old paper used for wrapping books, are both a tactile and visual reference to the culture code of yesteryear. 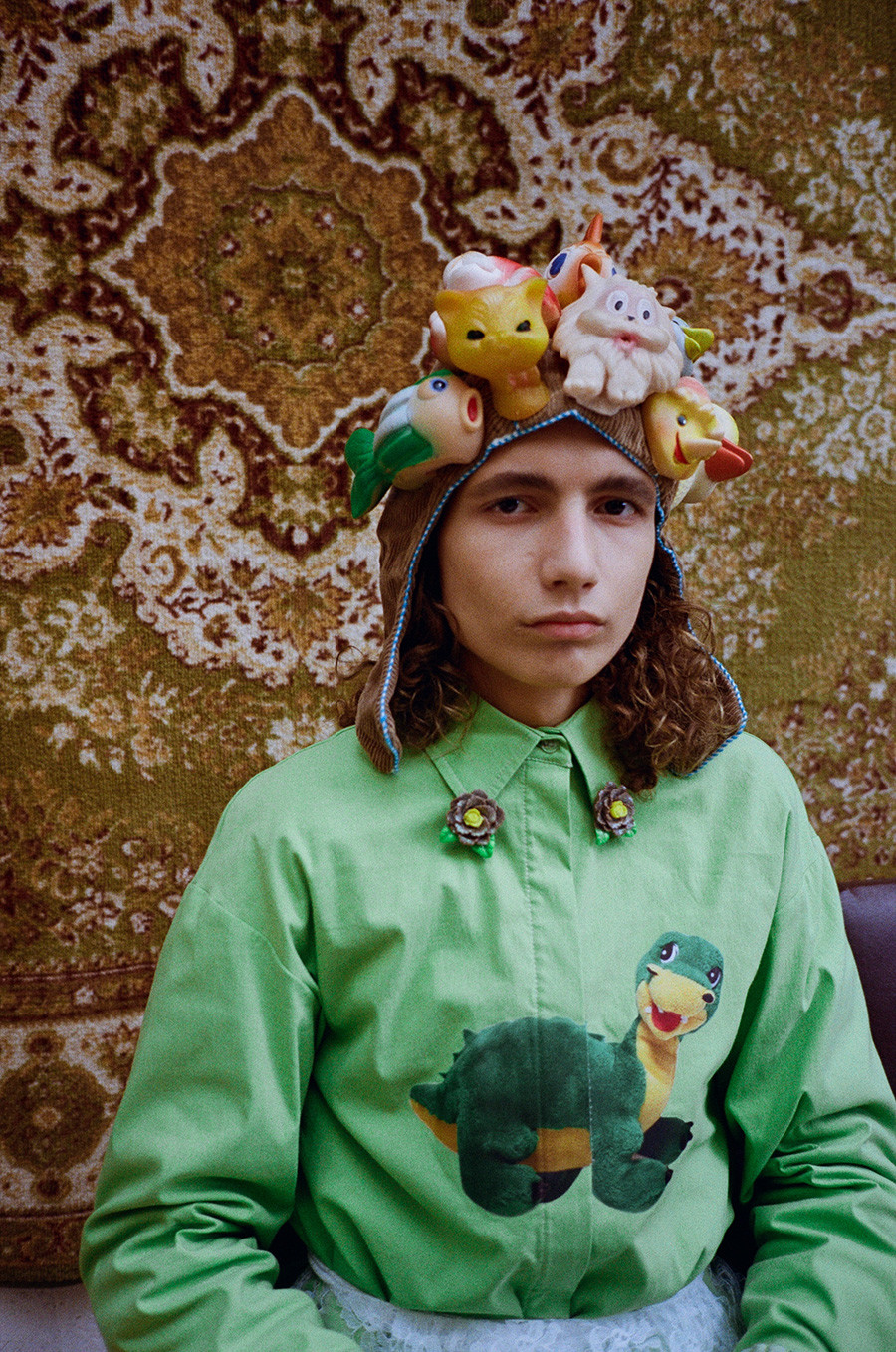 The brand’s current collection is dedicated to the theme of childhood and iconic child beauty, which (as any parent will know) can be weaponized, for it’s so hard to refuse a cute kid anything. The cut and style make it look as if an adult donned something from the wardrobe of their son or daughter, but in their own size. In all the items, patterns from the past are clearly traceable. For instance, the shape of the lace aprons is instantly recognizable to anyone who studied at a Soviet school. They are sewn from old lace, which the designer and his team found in a vintage fabric store and carefully restored. “We saw in our mind’s eye all these youth and student festivals, with girls adorned with ribbons,” says Roma. “I wouldn’t want my things to be kind of transported back 40 years. Our aim is not to glorify everything Soviet, and our clothes are not bought out of nostalgia. But we like the emotional message of unity and romance that they signify.” 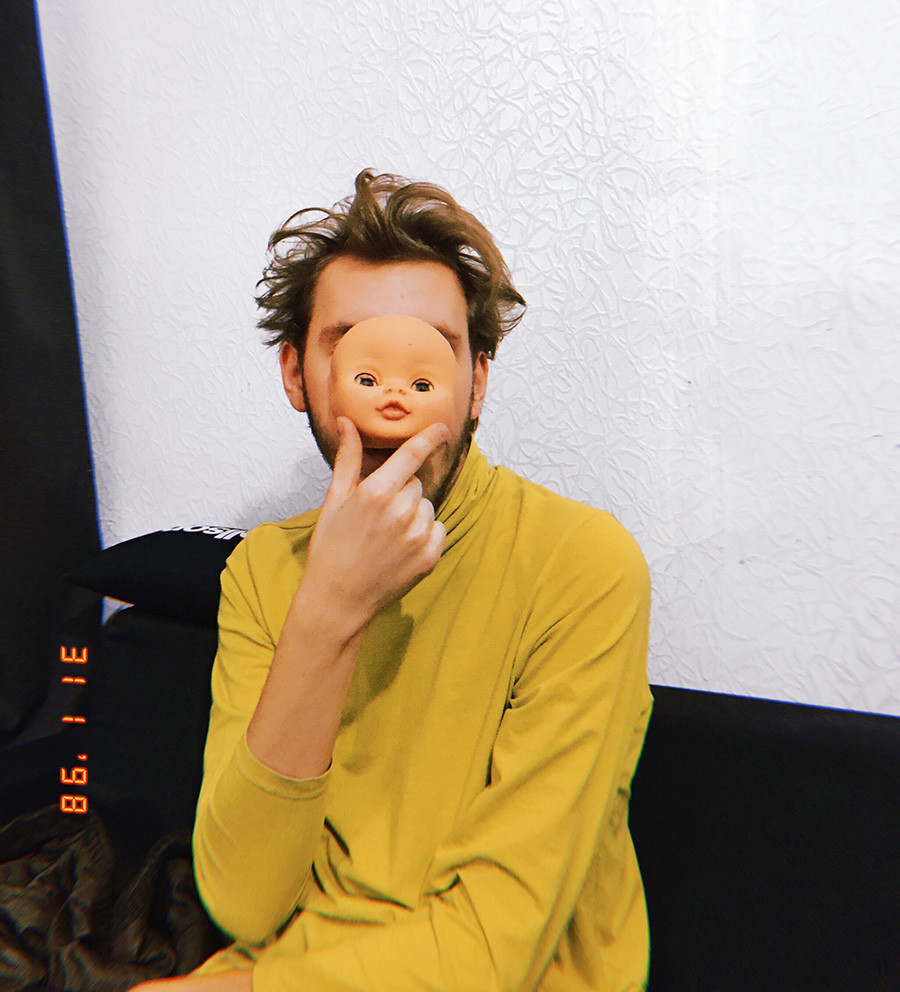 The collection includes rubber toy hats that no forty-plus Russian could be unmoved by. In addition, the designer makes “sunglasses” from cupronickel soup spoons, and fashionable mono-earrings from dessert ones, plus a series of clips in the form of porcelain dogs. 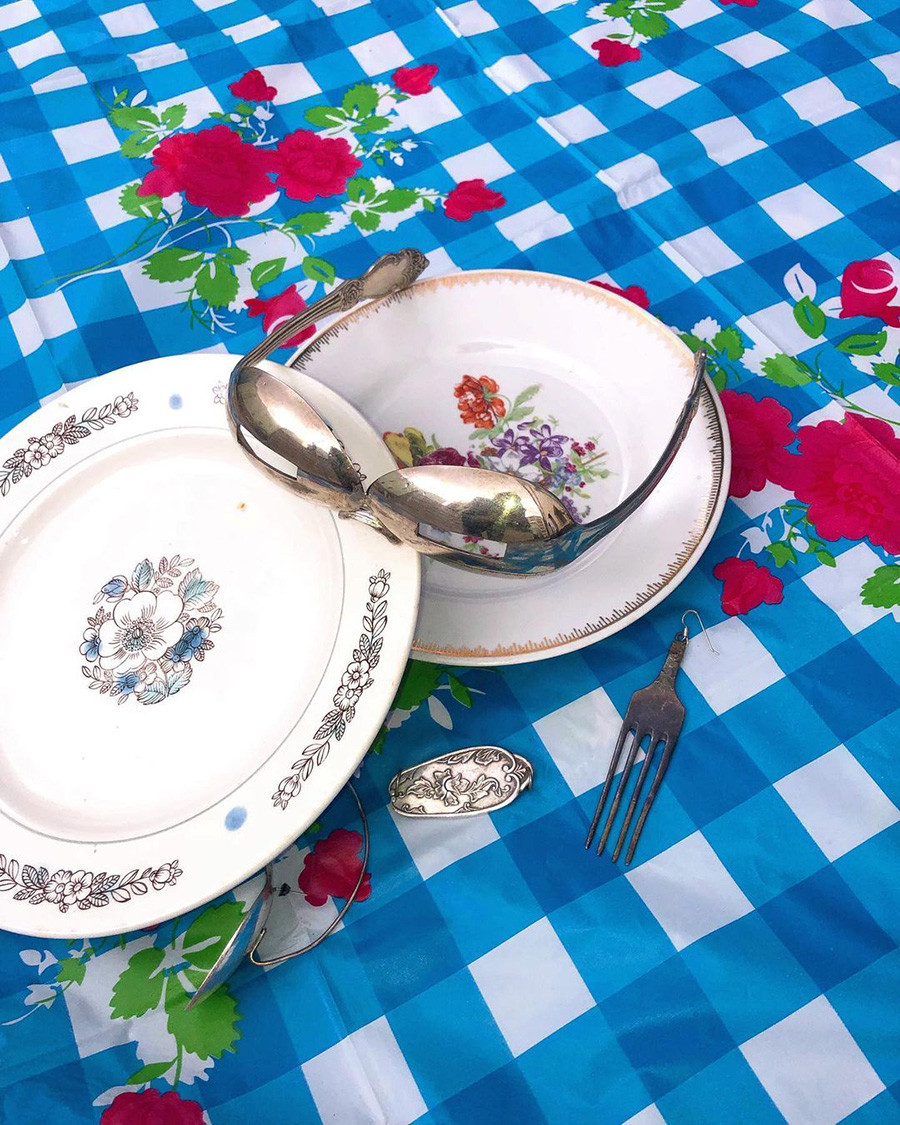 Despite having a number of vintage fabric suppliers, the designer buys a lot himself online and at flea markets. That’s where the dogs were picked up, for example. They are a series of hand-painted porcelain figurines from the famous Gzhel factory. The designer snapped up all 400 pieces on offer from a woman whose mother had worked at the factory. Back in 1990s Russia, wages were often paid in the form of goods.