What does Manizha’s performance at Eurovision 2021 actually mean? 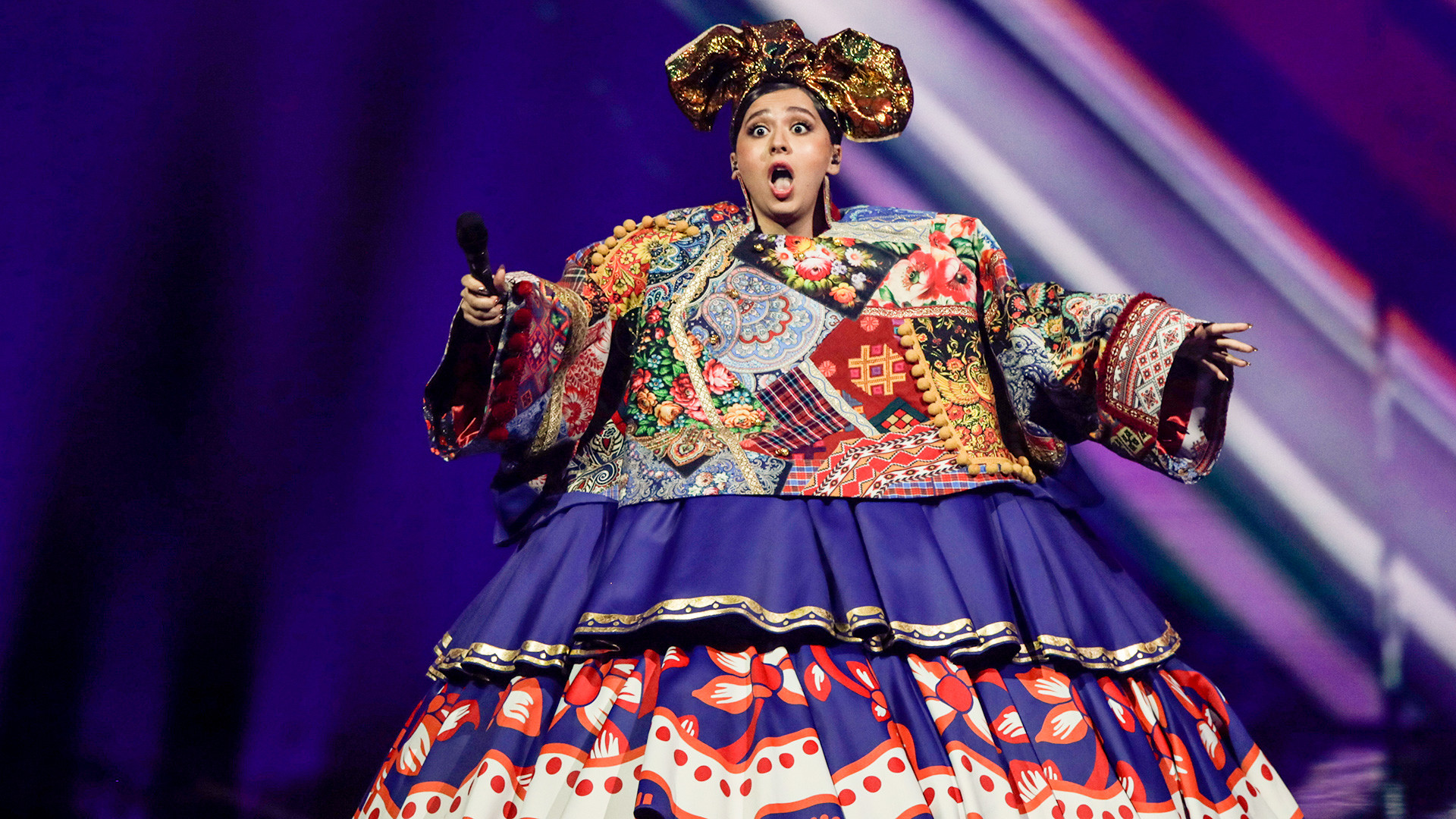 Manizha from Russia performs at the first semi-final of the Eurovision Song Contest at Ahoy arena in Rotterdam, Netherlands, Tuesday, May 18, 2021

AP
On May 22, 2021, singer Manizha will represent Russia in the Eurovision finals. Her performance uses a huge patchwork dress and a red jumpsuit, while a hundred women will sing from a huge screen together with the contestant. We explain the meaning of her performance and explain who the singer was inspired by to create it.

On May 18, the Russian singer of Tajik origin Manizha reached the finals of the Eurovision International Pop Song Contest. A video with her performance in the semi-final gathered 7.8 million views in two days.

The singer performed her song titled ‘Russian Woman’, written in two languages - Russian and English. The Russian part uses some stereotypical phrases that haunt many Russian women: “Oh, beautiful, you’re over 30, hello, where are the kids?” or “You’re generally beautiful, but you should lose some weight.” It also touches the topic of children growing up without a father - “Fatherless son, fatherless daughter, but you can’t break me.” Manizha sings the refrain in English: “Every Russian woman needs to know you’re strong enough to break the wall!”

According to Manizha herself, the song is sarcastic and mostly mocks the hurtful words that women say about the look and way of life in a patriarchal society.

“Now we know that this knowledge causes trauma and I won’t tell my daughter these things,” Manizha told The Guardian.

At the beginning of the performance, the singer appears in a huge tiered dress on wheels, consisting of different scraps - pieces of fabric were sent in from all over Russia. They all demonstrate how many different ethnicities live in the country. 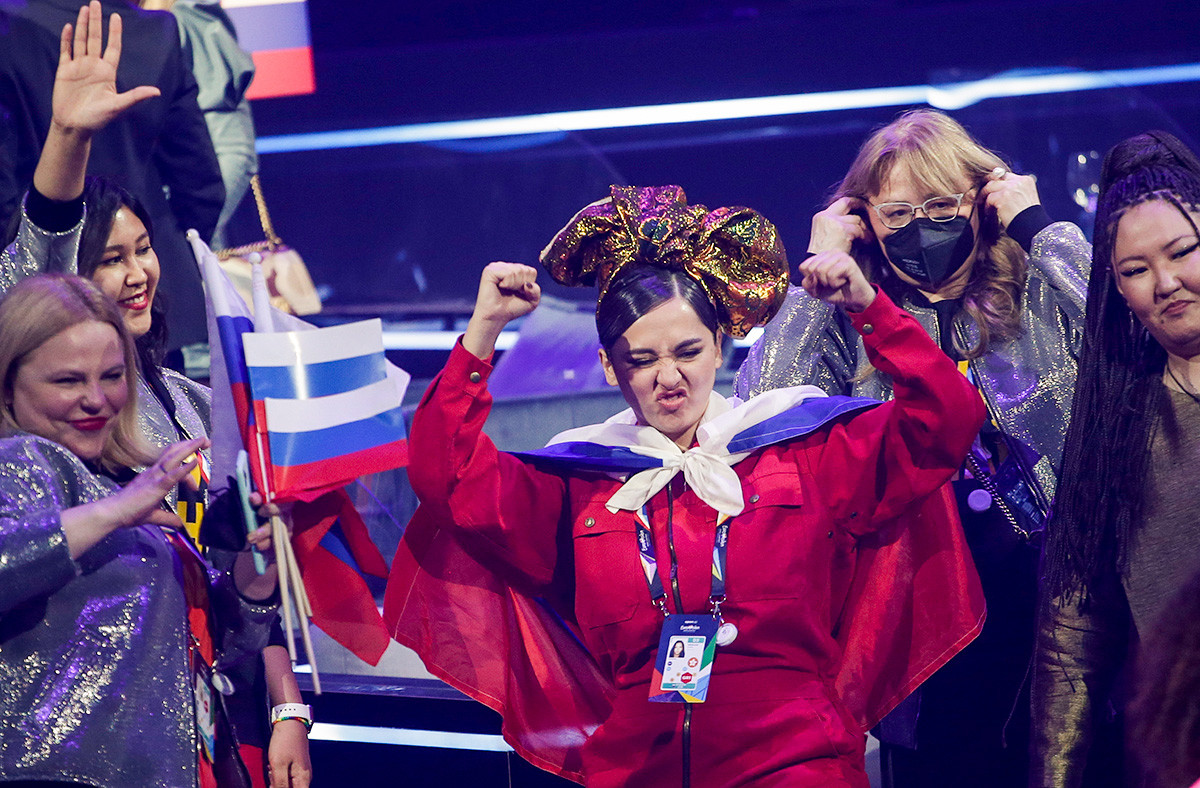 Manizha from Russia celebrates qualifying after the first semifinal of the Eurovision Song Contest at Ahoy arena in Rotterdam, Netherlands, Tuesday, May 18, 2021

“Russian women, they are different both externally - the color of their skin, hair, the cut of their eyes - and internally. And in this diversity and mix is their main strength and beauty,” Nadzhiba Usmanova, the mother of the singer, the author of the idea of the costume, said in her interview to Blueprint. According to Usmanova, one of Manizha’s fans sent three fragments of fabric woven by his grandmother a hundred years ago.

Later in the storyline of the performance, the singer “steps out” of the elaborate dress and sings in a red jumpsuit.

“It’s working class clothing. I didn’t want to be too pretty on stage. My manifesto is that I wanted to represent working-class heroes, working-class women who work hard to be successful,” the singer explained. 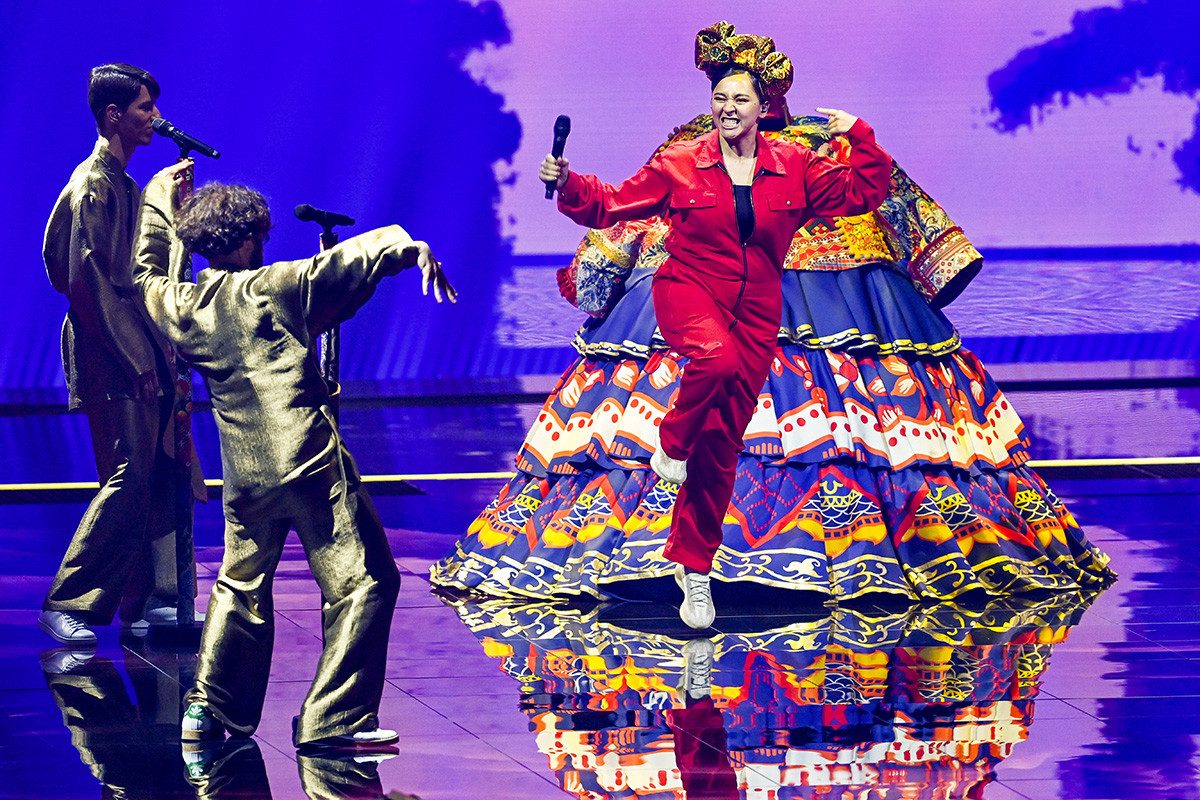 Russia's Manizha performs during the first dress rehearsal, on the eve of the first semi-final of the 65th edition of the Eurovision Song Contest 2021, in Rotterdam, on May 17, 2021

According to Manizha’s mother, this reincarnation symbolizes the process of being reborn from one state of being a woman to another.

“From stereotype to reality. From a piling up of images and expectations to who a woman really is,” Usmanova recalled.

During the performance, symbolic images of a sad woman in a kokoshnik and women carrying heavy trays appear on the screen - images from paintings by avant-garde Russian artist Natalia Goncharova.

“She (Goncharova) perfectly combined something traditional and avant-garde, East and West, she was not accepted by all her countrymen, but her talent was recognized all over the world,” Usmanova said. 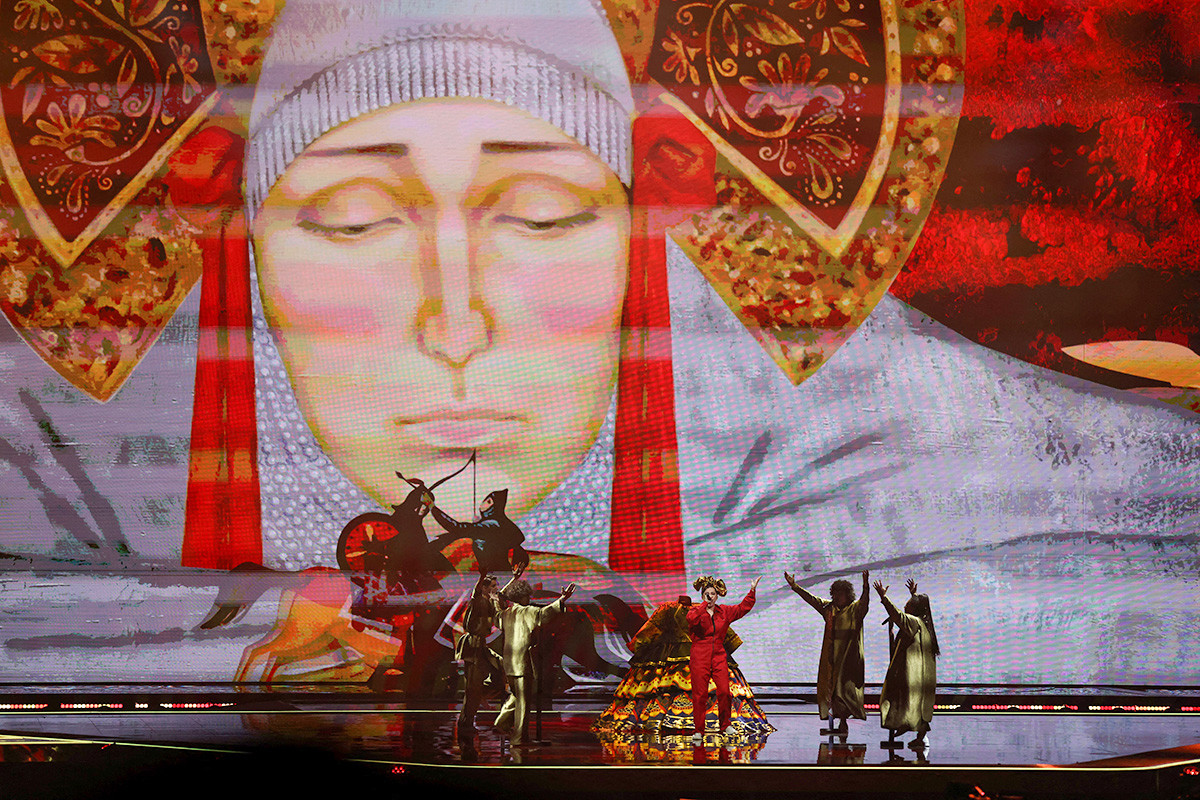 Russia's Manizha performs during the first semi-final of the 65th edition of the Eurovision Song Contest 2021, at the Ahoy convention centre in Rotterdam, on May 18, 2021

At the end of the song, Manizha turns to the screen behind her and sings along with more than one hundred Russian women joining her virtually in a Zoom-like conference call - among them famous Russian bloggers, journalists, political activists and founders of charitable foundations, who, according to the singer, inspire her by trying to make the world a better place every day.

“I decided to call more than a hundred Russian women to the stage, they will go to Eurovision with me. They will appear on those screens, they will sing the way they want, they will look the way they want and do what they want. I really want to show their freedom,” that’s how the singer explained the idea. 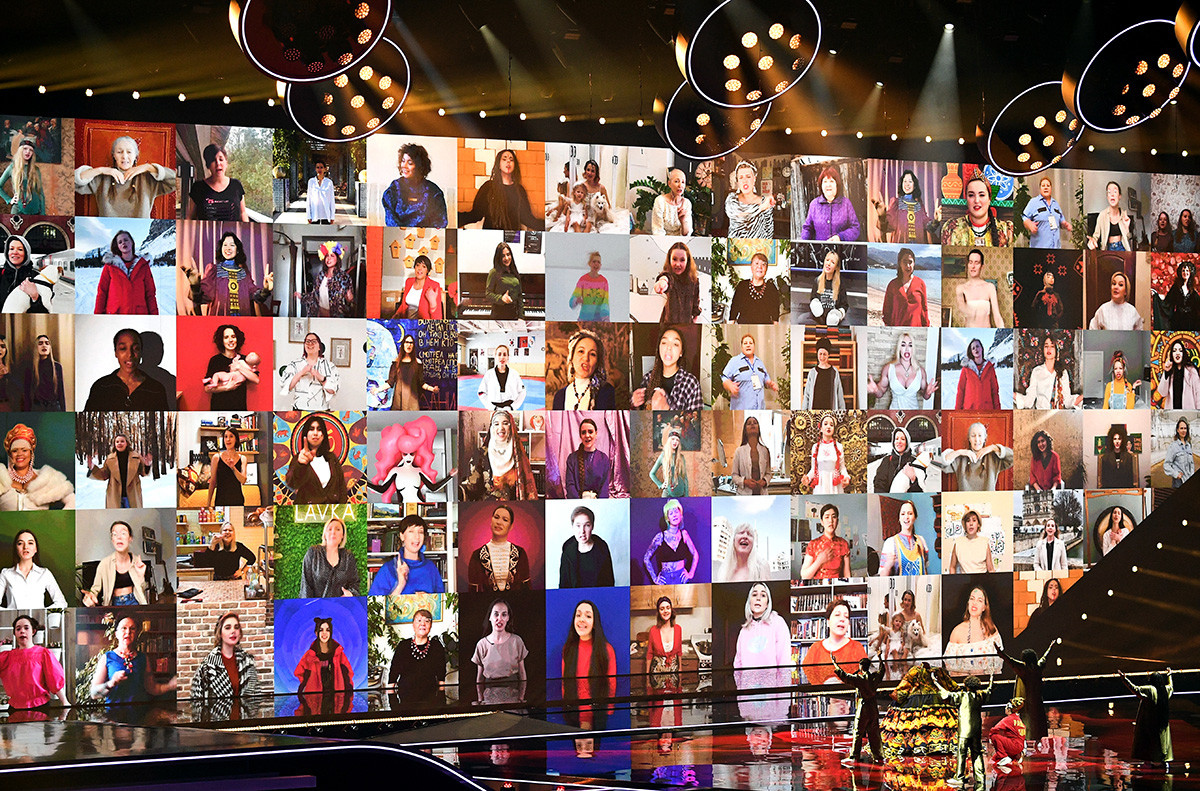 That said, her entire performance is generally aimed at achieving freedom for all women and children.

“Above all, I want all of this art, all of these songs, all of my words to lead to there being a law that would protect women and children from domestic violence,” Manizha said. 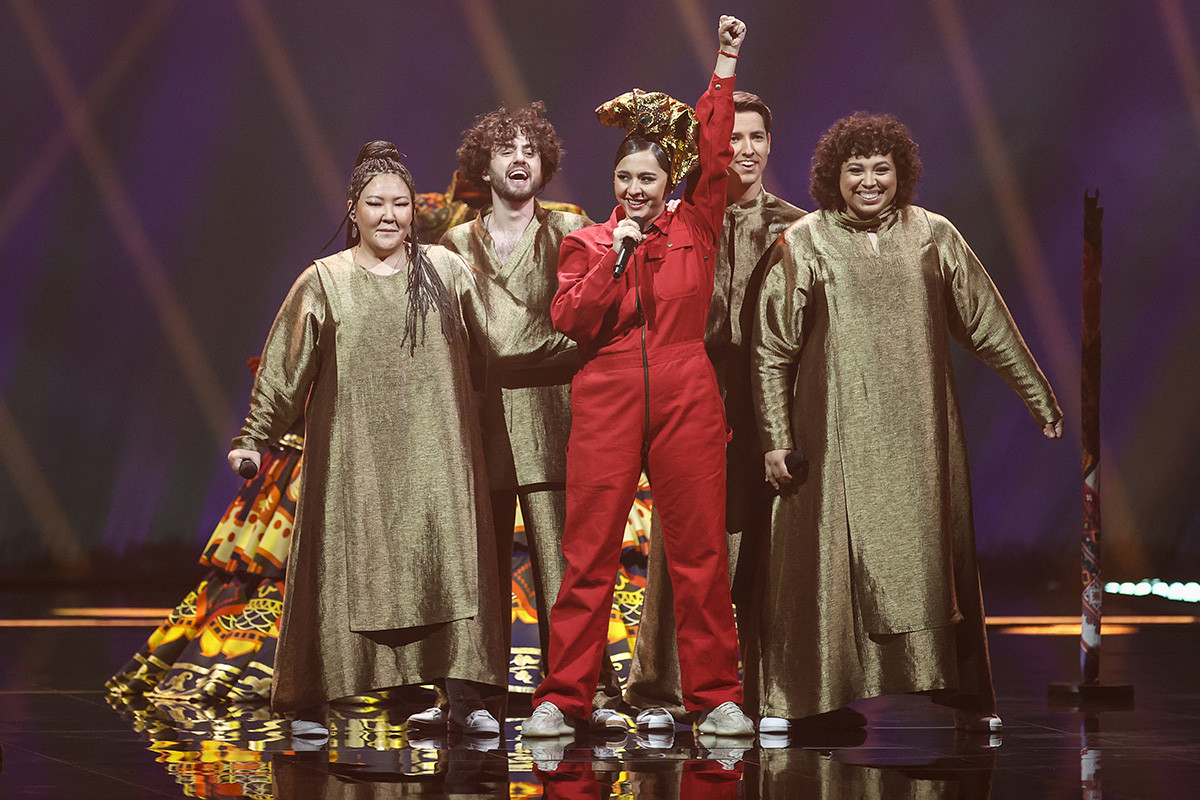 Russia's Manizha performs during the first semi-final of the 65th edition of the Eurovision Song Contest 2021, at the Ahoy convention centre in Rotterdam, on May 18, 2021