The art of dance through the eyes of Russian artists (PICS) 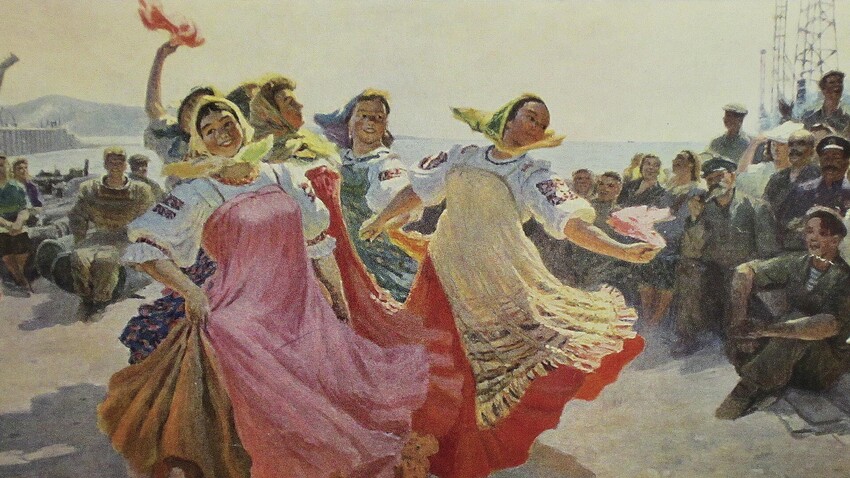 ‘Dance’, Mikhail Volodin
Russian artists believed that dance was one of the best ways of depicting the colors and variety of folk culture. 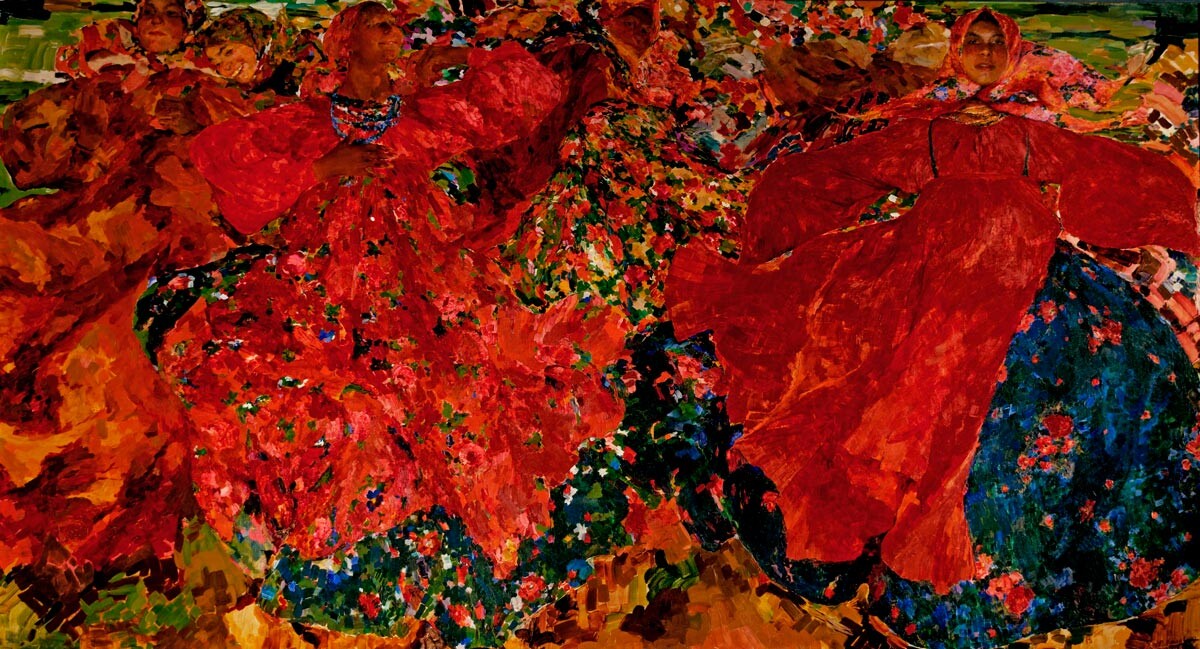 This impressionist worked to materialize the energy of dance. His dance of everyday women in bright-colored sundresses occupies the entire canvas, as if it’s about to spill over the edges. 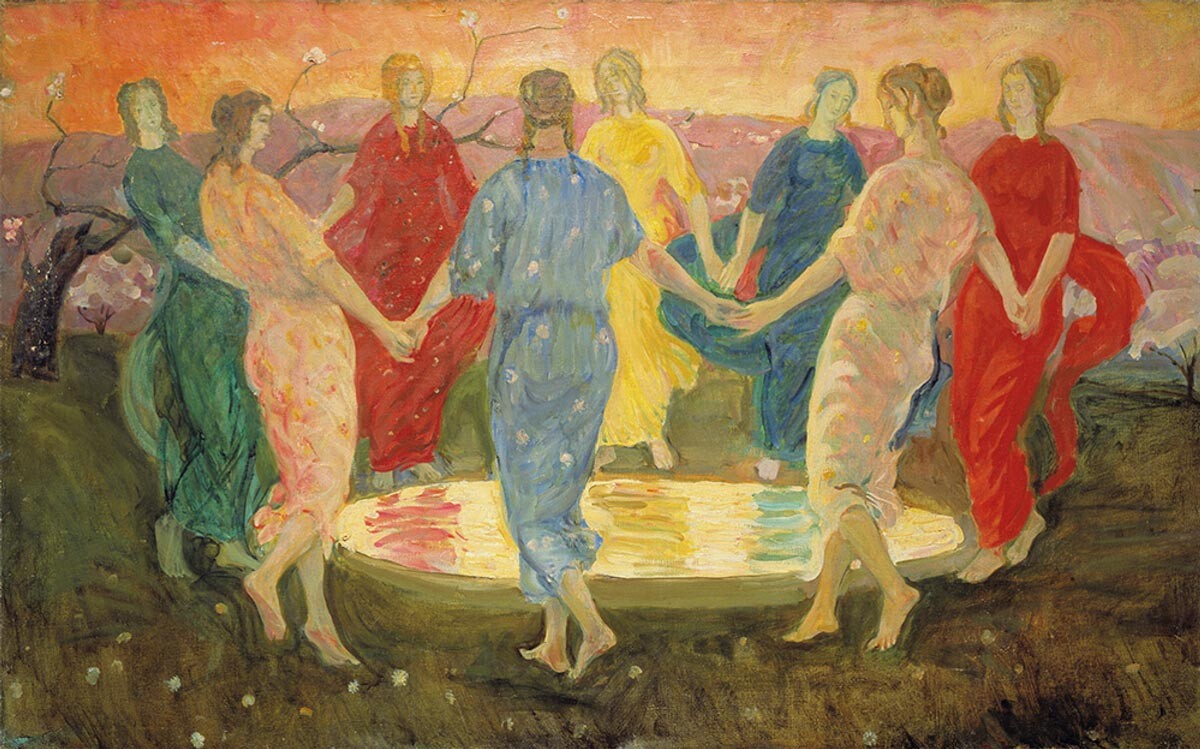 The creator of ‘Bathing of a Red Horse’ was also captivated by the magic of dance, including the folk round-dancing tradition. ‘By the Fountain’ is a smaller canvas depicting dancing women in the typical style: water colors, semi-transparent shapes and an easy hand. 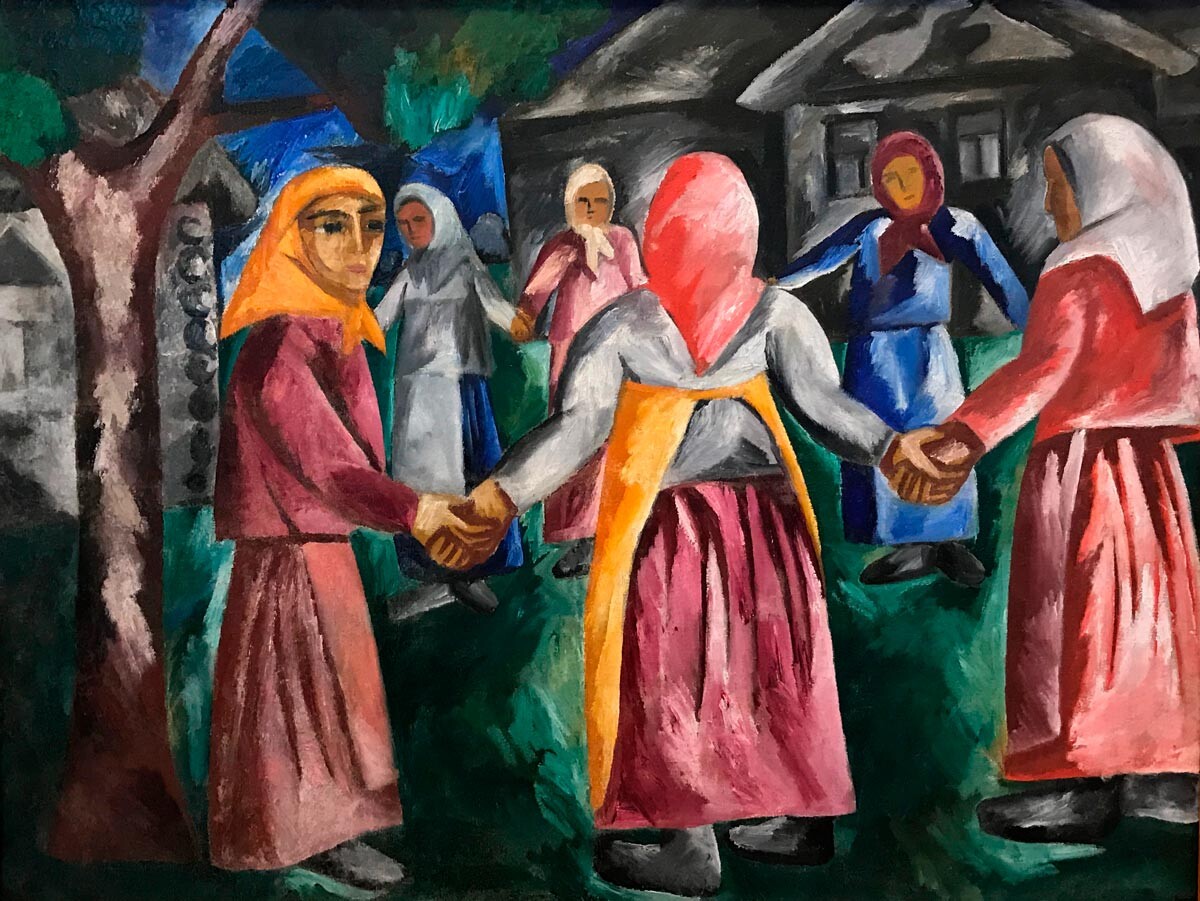 One of the key figures of the Russian Avant-Garde movement, Natalya Goncharova depicted Russian folk culture through the prism of the early 20th century. 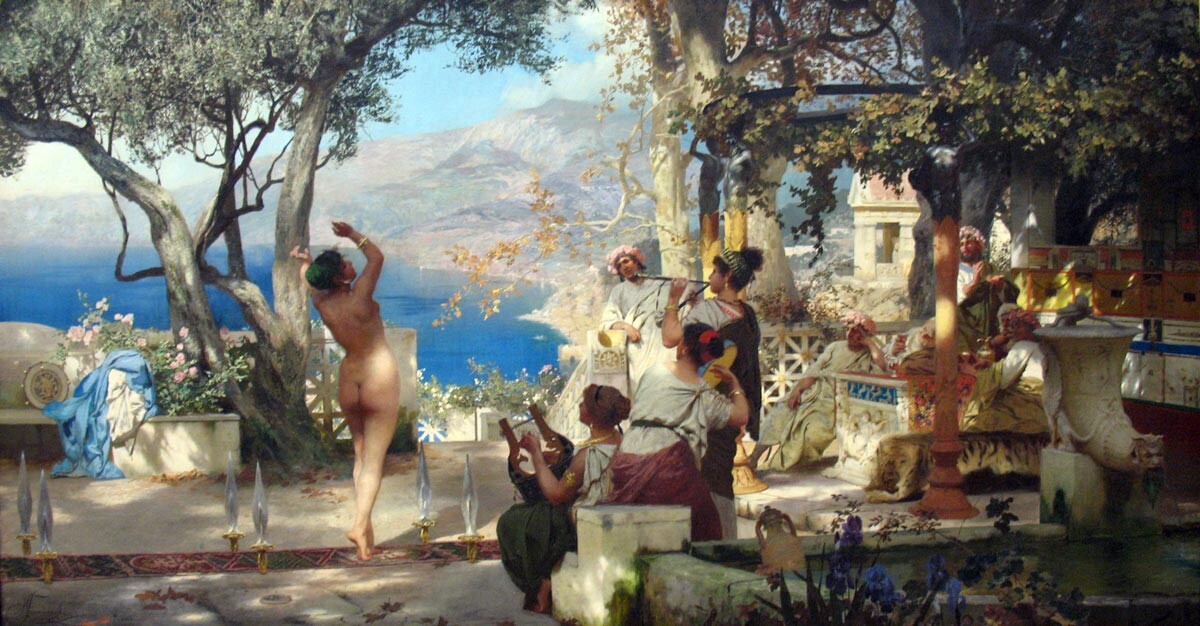 The fictional antique storyline was inspired by a trip to Rome. The work is done in the style of late academism. The late 19th century piece was treated by critics - especially the Wanderers - as a “thistle” among the regular artworks of the day and one that required getting rid of. Despite that, the reduced version of this painting became the artist’s most expensive work to date - Sotheby’s auctioned it off for $2,098,500 in 2011. 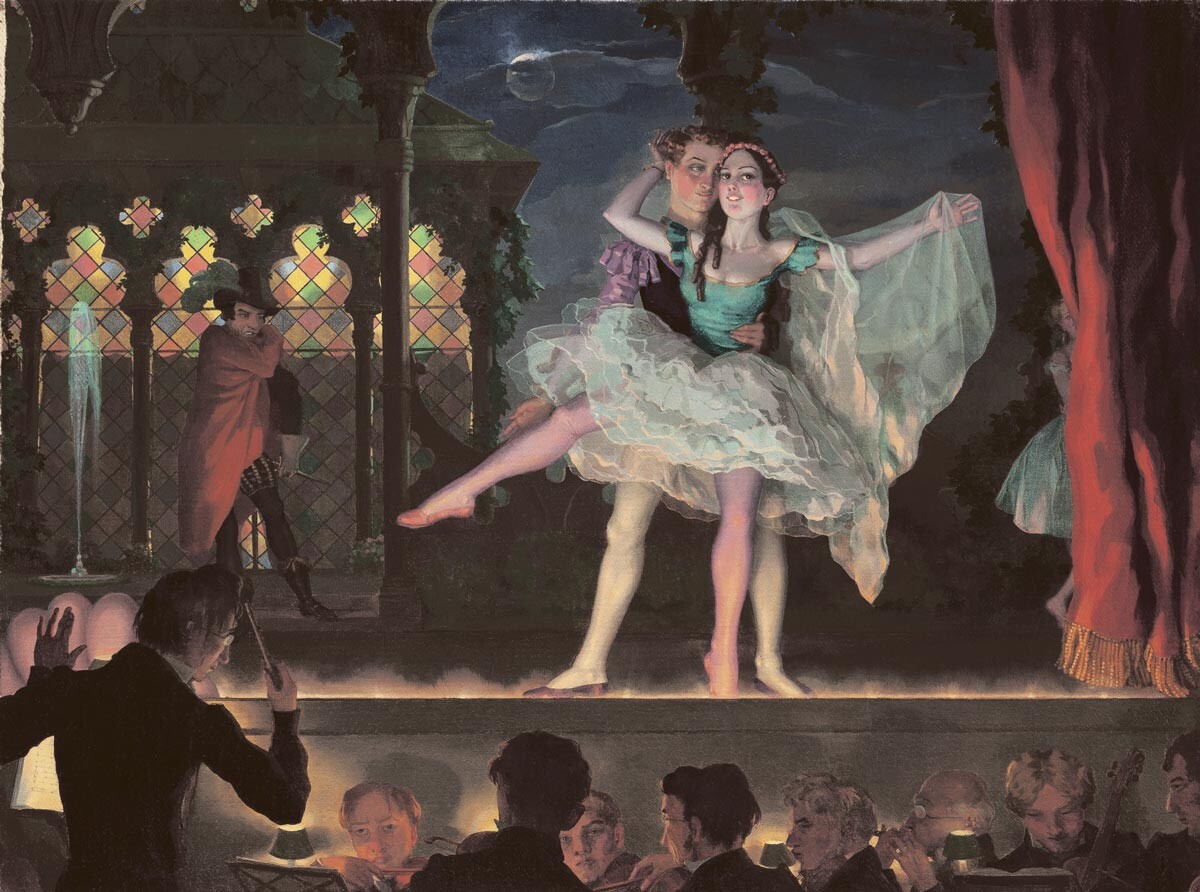 In pre-revolutionary Russia, ballet was a personification of the splendor and might of the empire and considered one of the greatest treasures of the Russian Royal court. Dante’s ‘Divine Comedy’, depicted by Somov, deals with the tragic love of Francesca da Rimini for her husband’s brother. Having achieved great success in New York, the painting was sold at an auction in 1926 and considered lost until 2020, when it once again resurfaced at an auction. 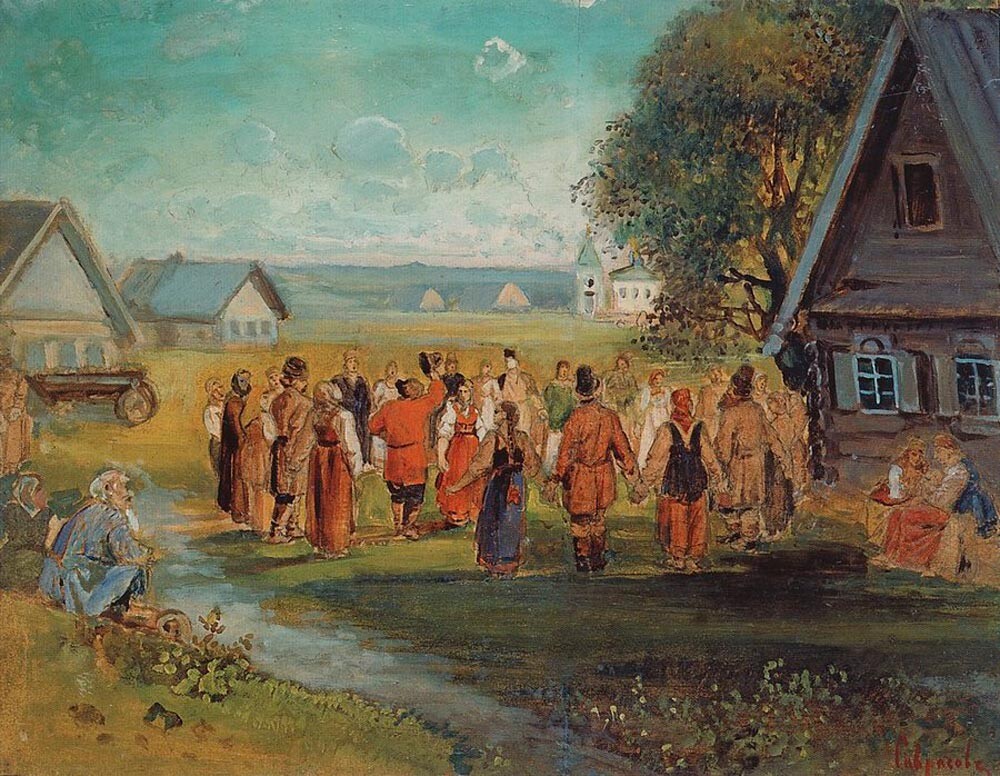 The sacred dance of Eastern Slavs - khorovod, or “round dance” - was held on just about every special occasion, be it a wedding, calling for rain, the start and end of harvest season and so on. Savrasov, who loved paying homage to Russian village life, couldn’t pass up an opportunity to depict it like this. 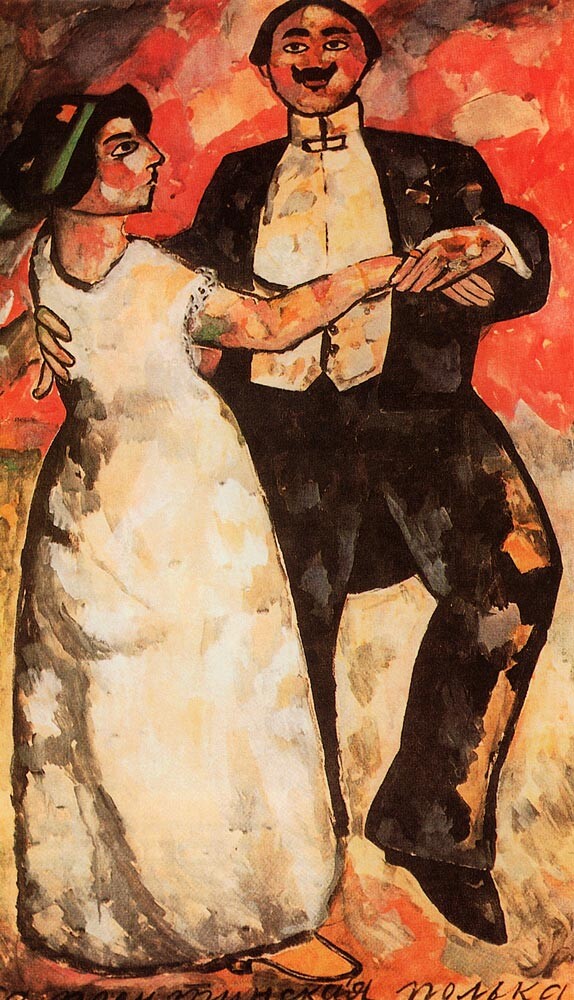 The fast and lively dance used to be an aristocratic pastime. Then, the polka - as well as the kadril - entered the masses, becoming almost synonymous with the Russian dancing tradition. Malevich depicted the “folk” polka in a very folk art style.

Volodin, as a loyal member of the Communist Party, transported his favorite theme into a very common setting of the day - a socialist construction site. 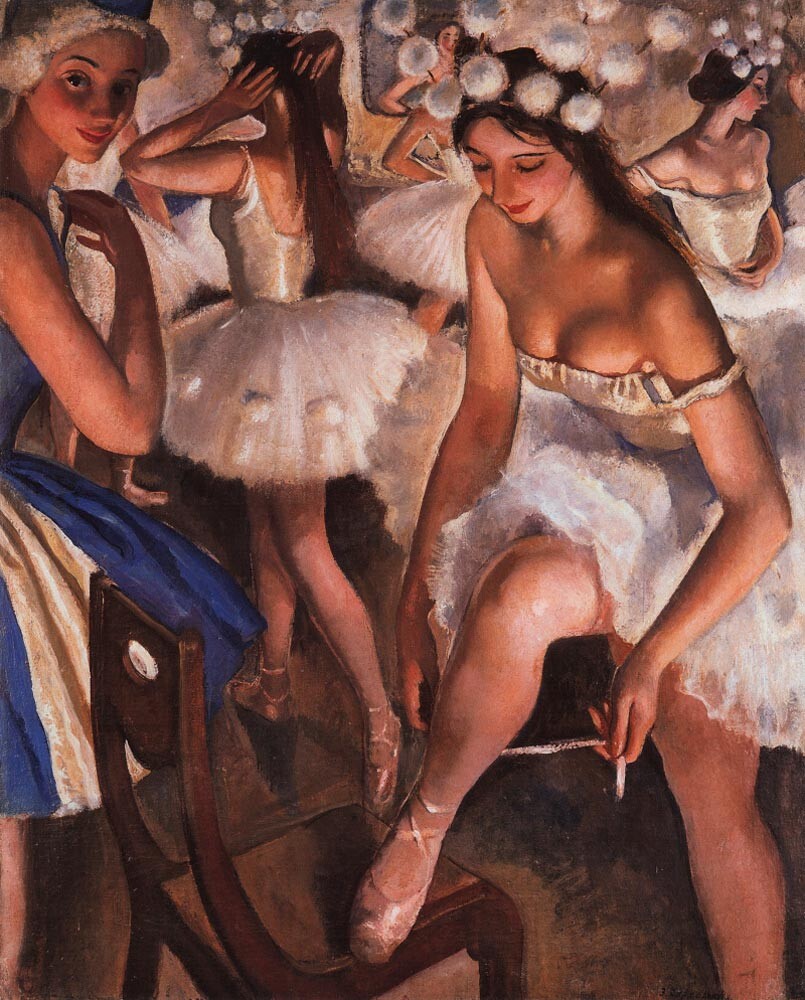 Serebryakova created an entire series dedicated to what goes on behind the scenes in the world of ballet, focusing not on the dance itself, but the celebratory and exciting atmosphere of ballet dressing rooms. The visual style of snooping and documenting was her favored approach. 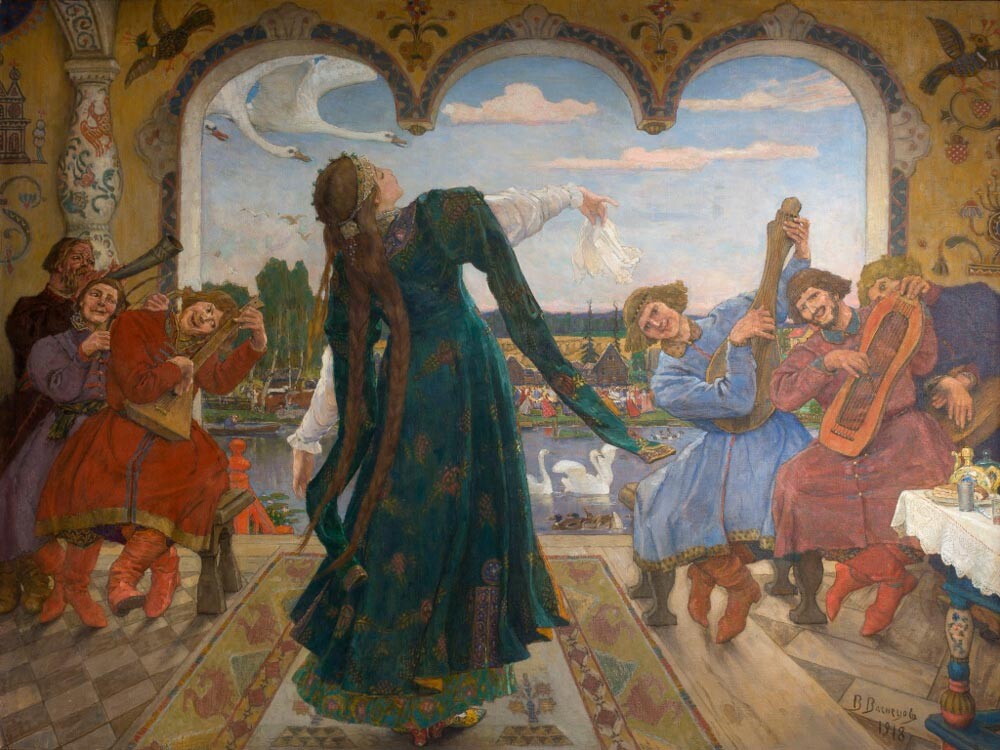 Vasnetsov is known across Russia exclusively as the main illustrator of Russian fairy tales. The tales themselves are a reflection of how he saw them. The Princess Frog is depicted at the moment of transformation, as her former form returns and she takes part in dance. 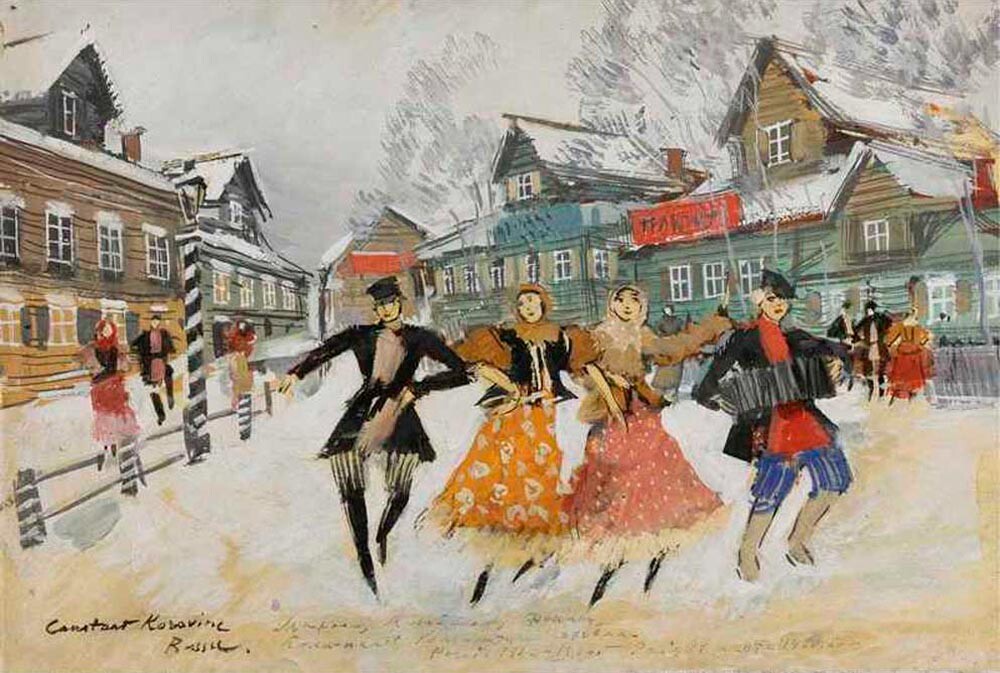 Village landscapes were done by Korovin from memories in the 1930s, while he was forced to reside outside Russia. Feelings of nostalgia prompted the artist to make a whole series on nature, troikas, celebrations and, of course, village dances. 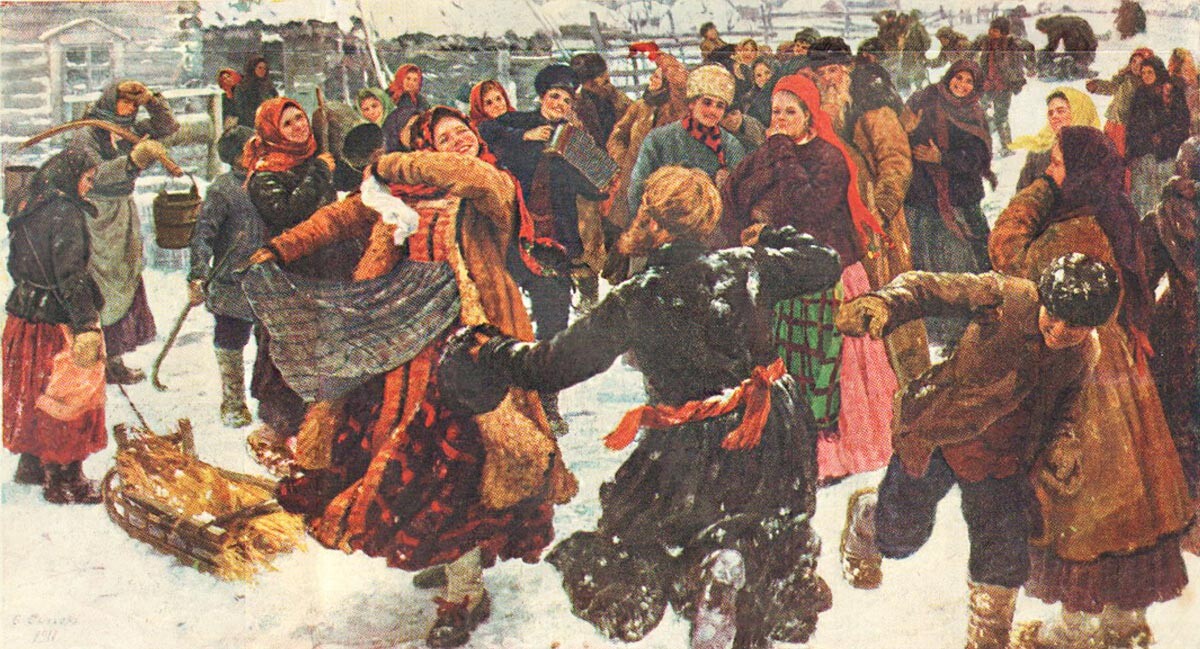 Dances during Maslenitsa (the Slavic celebration marking the end of winter) were just as important as eating pancakes and burning the wicker man. 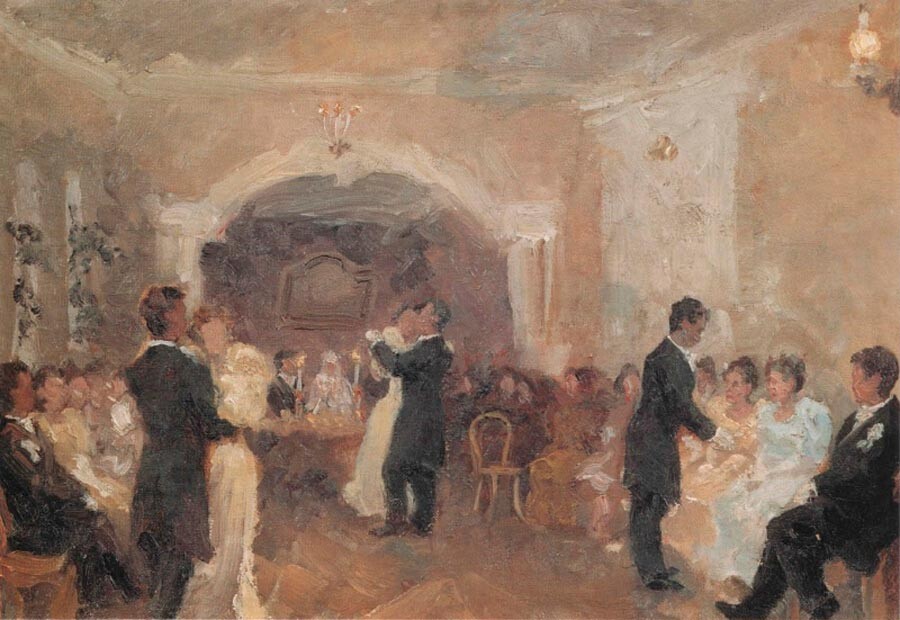 Merchant balls were extremely popular in the 19th century. Unlike the famous aristocratic balls of Tsarist Russia open only to the nobility, merchant-class balls were available to all: a fee would be paid by merchants to enter, while others had to pay for an expensive ticket. Because of that, people of all walks of life would end up at those events, be it bohemians, well-off civil servants or foreigners. This blend of classes also made for a more fun party. 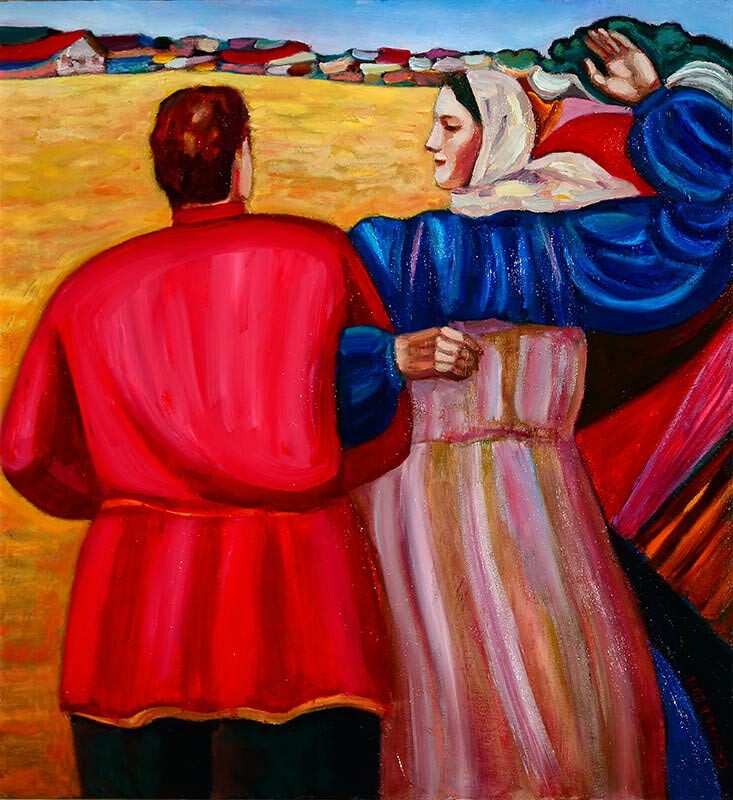 Boris Smotrov emphasized the national theme using a popular style. His “flat” approach is reminiscent of a patchwork blanket, bursting with bright colors.