To whom is the only art installation on the Moon dedicated? (PHOTOS) 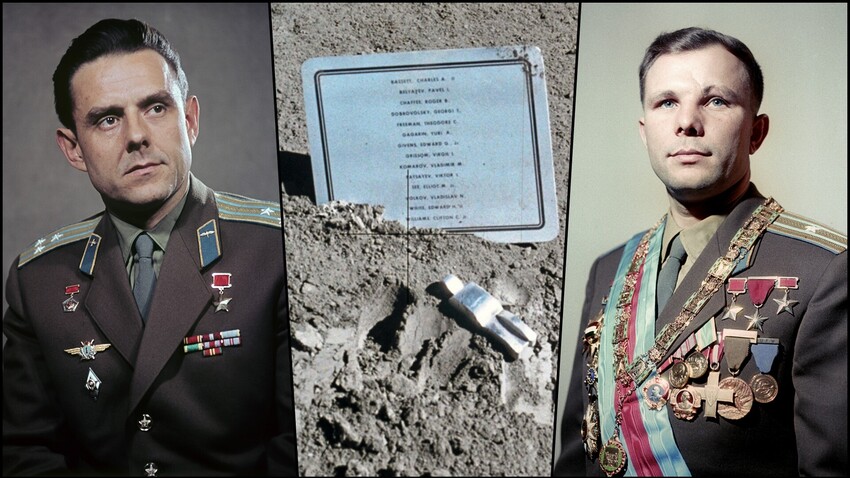 NASA; Vasily Malyshev, Vladislav Kivrin/Sputnik
In the early 1970s, fourteen people were commemorated by a sculpture that was brought to Earth’s satellite.

On August 1, 1971, at the southeastern edge of the Mare Imbrium, Apollo 15 commander David Scott placed an aluminum sculpture on the dusty surface of a small crater next to a parked lunar rover. At that moment, the moon became the largest exhibition space in the universe.

The sculpture of a man lying face down, titled ‘Fallen Astronaut’, is so far the only art installation on the moon. It is nine centimeters tall, genderless and without any racial features. The figure was made by Belgian artist Paul van Hoeydonck. David Scott brought it in the pocket of his spacesuit and placed it on the cold lunar soil. Next to it, he stuck a nameplate with eight American and six Soviet names of people who had made huge contributions to space exploration, but were no longer alive. 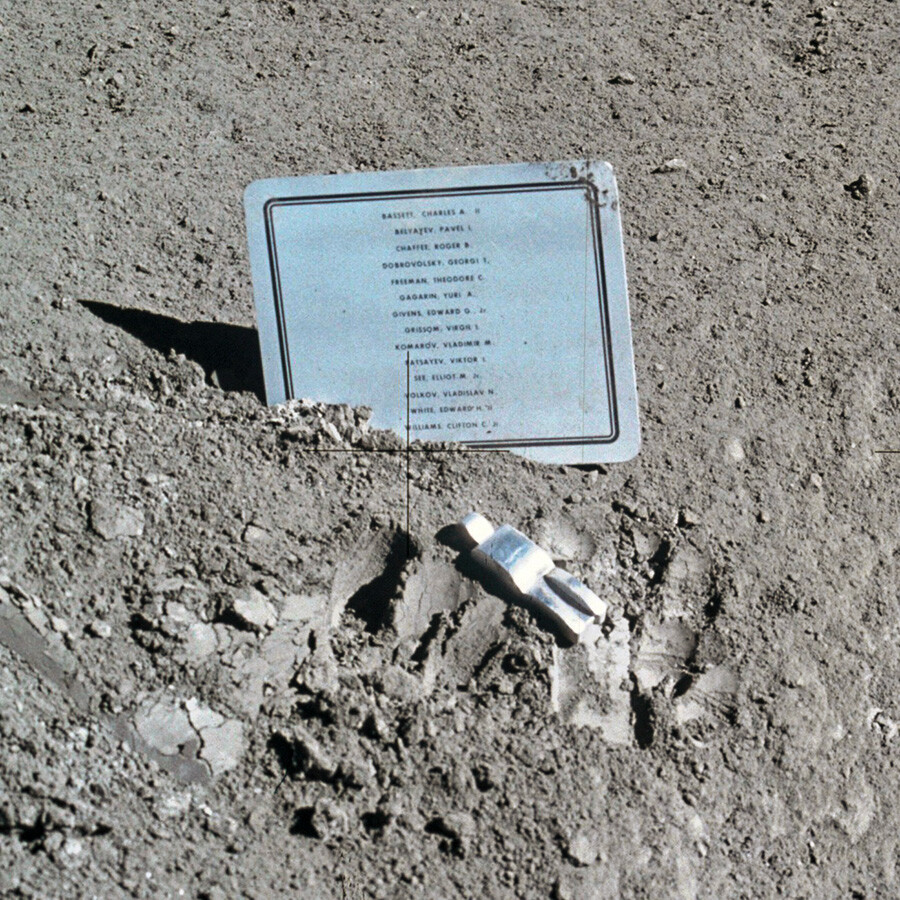 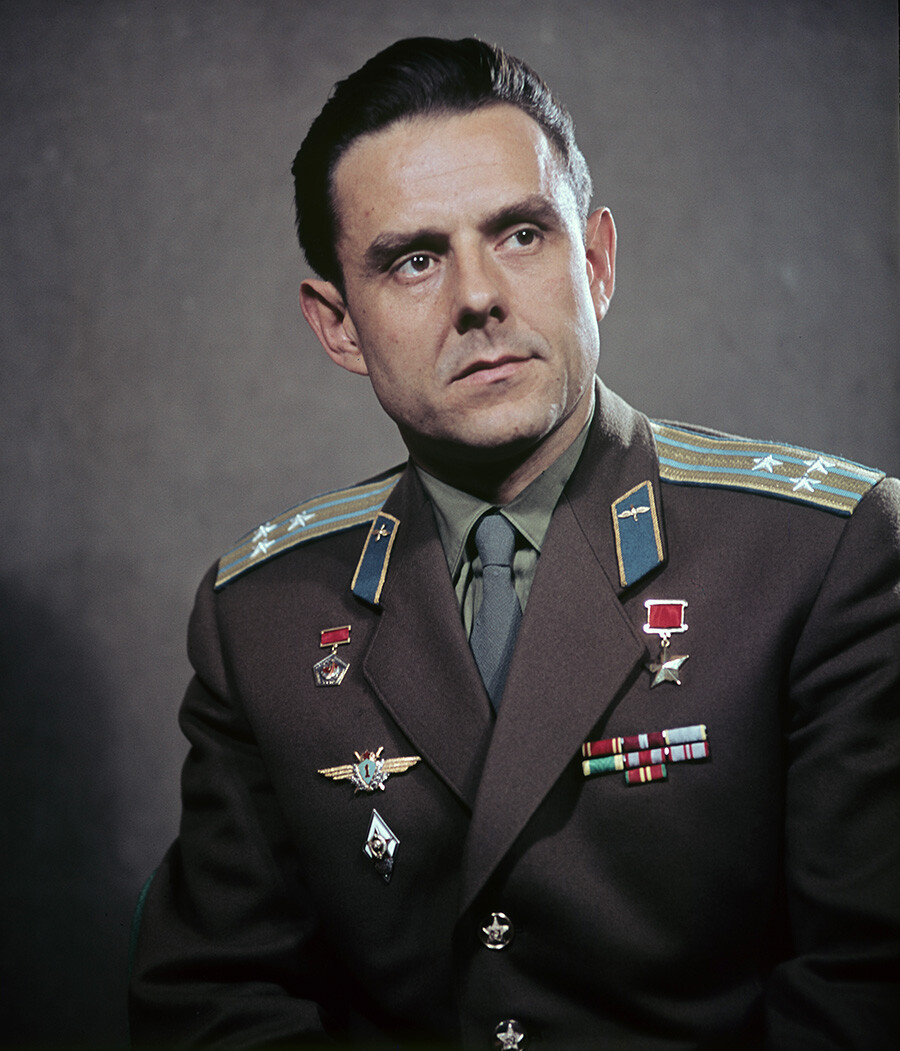 His death was the first death in space. Vladimir Komarov was the captain of the Soyuz-1 spacecraft, which was launched into orbit in April 1967. He was to carry out a unique mission: the docking of spacecraft for the first time (right after him, a crewed Soyuz-2 left for orbit). But things went off course from the very start.

First, one of the solar panels did not open up. Then, the command to steer the spacecraft using the Sun did not go through. Shortwave communication was then disrupted. It became obvious that the mission had failed and it was time to return.

A fatal malfunction occurred at the final stage of descent: the parachute slings got twisted and the Soyuz-1, descending with a speed of about 60 meters per second, crashed into the ground and exploded. Later, the engineers admitted that the Soyuz was not perfect and it was not worth sending a cosmonaut in it, because none of the three unmanned test launches were flawless. 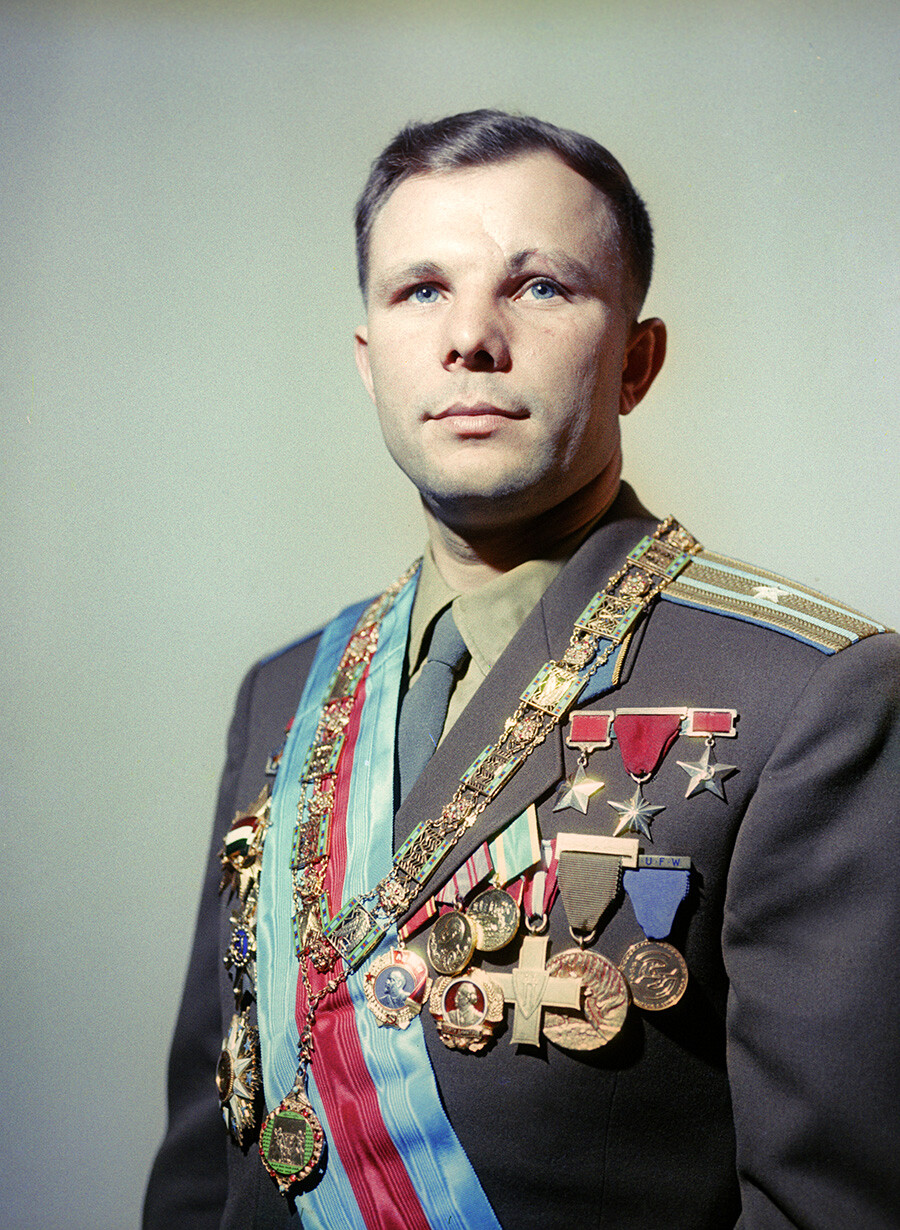 Yuri Gagarin was the first human in history to fly into outer space. His legendary flight on April 12, 1961, although exhausting and difficult (the details of which were kept secret for a long time by state propaganda), was an undeniable victory for all mankind.

Gagarin did not go on any space missions after his legendary flight. He became deputy head of the Cosmonaut Training Center and commander of the Soviet cosmonaut team. In 1966, he was appointed as Komarov’s backup. It is a known fact that Sergey Korolev, the father of the Soviet space program, promised the chair of the main pilot of Soyuz 1 to Gagarin, but Korolev’s death changed these plans. It was Komarov who flew the Soyuz and tragically died.

Gagarin died two years later, in 1968, during a training flight on the MiG-15UTI. There is still no consensus about the exact cause of Gagarin’s death. According to a version proposed by cosmonaut Alexei Leonov, the tragedy happened after the plane hit the trail of a fighter jet that flew nearby. According to another, the plane collided with a weather balloon. Losing control of the plane, Gagarin and flight instructor Vladimir Seregin both died. 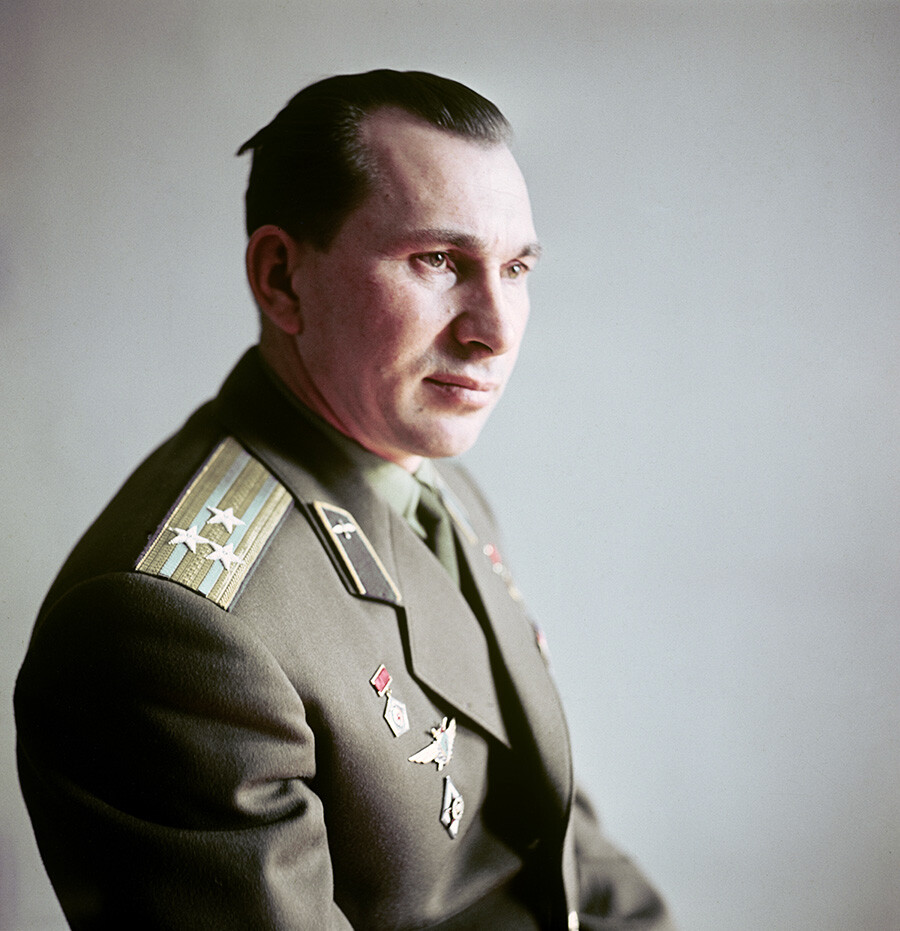 Belyaev was the first human to conduct a successful spacewalk. In March 1965, he flew into orbit together with co-pilot Alexey Leonov. Belyaev was in command of the spacecraft, while Leonov’s mission was to walk into outer space.

Several abnormal situations occurred during the mission. First, Leonov’s space suit swelled up during the spacewalk, making it impossible for him to return to the spaceship for some time. Then, at the final stage of the flight, the ship’s attitude control system malfunctioned. This made an automatic landing impossible. Belyaev had to steer the ship manually, something no one has ever done before during manned space flights. The crew landed safely, thanks to the captain’s skills.

Belyaev did not die in space or during training. He passed away in 1970 after undergoing surgery due to purulent peritonitis intoxication. 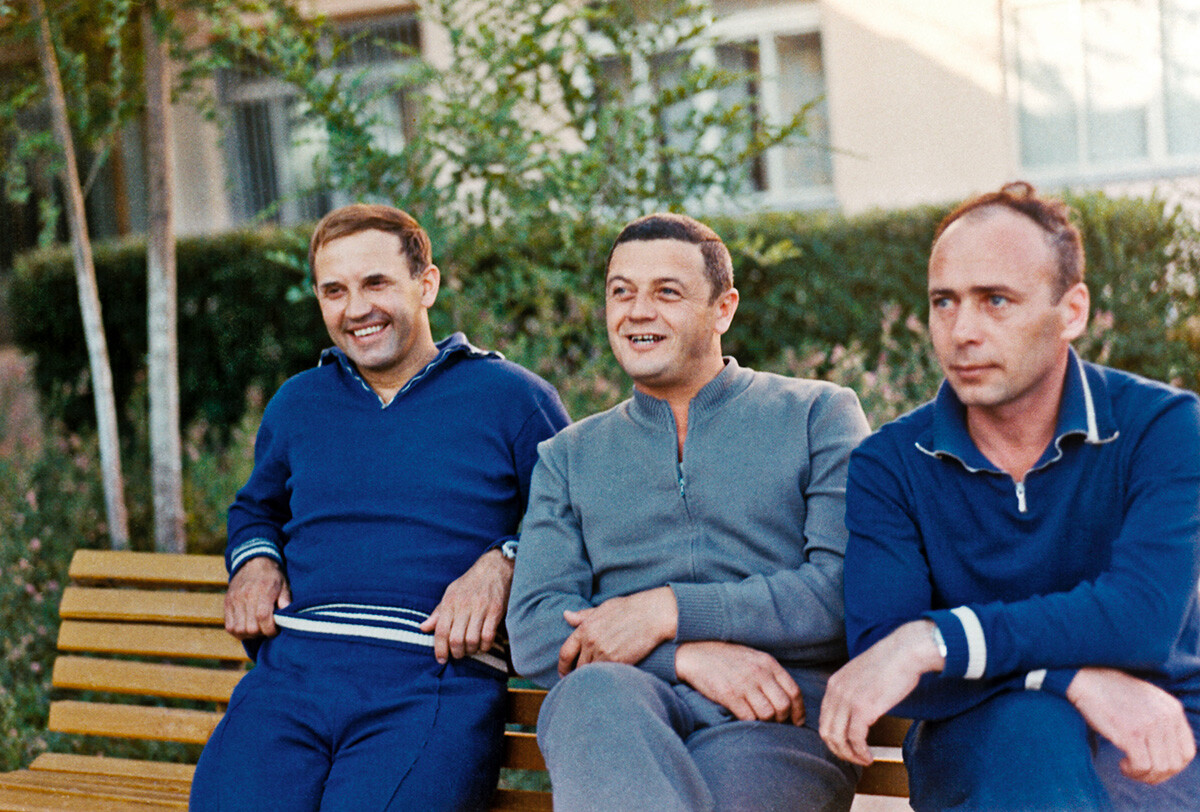 Four years after Vladimir Komarov’s death, a crew of three cosmonauts - Georgy Dobrovolsky, Viktor Patsaev and Vladislav Volkov - went to space. In June of 1971, they were the first ones to successfully dock a spacecraft at the Salyut-1 orbital station and were then ordered to return home.

Unlike Komarov’s flight, their mission took off without a hitch. Everything was going smoothly until the moment when, upon descending, 150 kilometers above Earth, radio communication with the astronauts suddenly broke down. Nevertheless, the space capsule carrying the crew continued its planned descent. It entered the atmosphere and landed in the designated area. However, when a rescue team arrived on the scene, they found dead astronauts inside.

A subsequent investigation revealed that the vent valve, which is responsible for equalizing the pressure inside the capsule, had opened at an altitude of 150 kilometers, while it normally opens at an altitude of 4 kilometers. The crew tried to repair the “leak”, but, after 40 minutes, the pressure dropped and the cosmonauts became unconscious. Their death was one of the most tragic in Soviet cosmonautics - and the last. After 1971, there have been no further Soviet or Russian cosmonaut deaths.