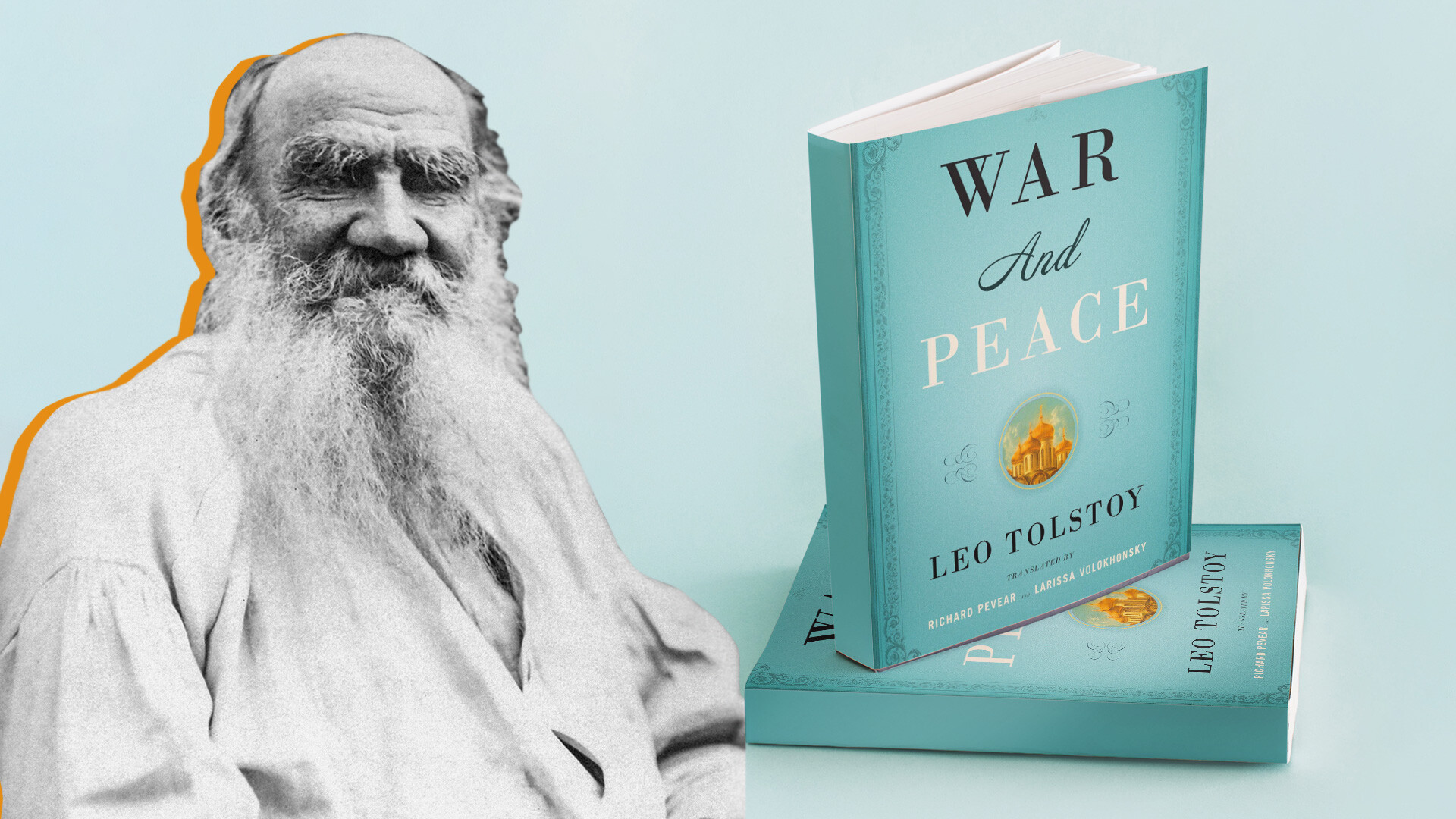 Legion Media; Vintage Classics
The four-volume novel is not an easy thing for most readers. However, knowing the plot is important to pretend to be an educated person.
Natasha Rostova is known to be a young and lighthearted girl, but finds happiness in marriage and kids, while her family suffers from debts and her first fiance dies at war between Russia and Napoleonic France.

What is the novel about in general?

‘War and Peace’ is an epic novel that tells a story of several families and another hundred characters and their private lives, while the major historical background is the war between Russia and Napoleonic France. Rewriting the novel about six times (and his wife had to do it by hand every time), Leo Tolstoy managed to show both Moscow and St. Petersburg, both noble society and peasantry and, of course, both war and peace times. In Russia, we used to laugh that school girls usually read only ‘peace’ pages flipping through ‘war’ ones, while the boys, in contrast, preferred the descriptions of the battle scenes rather than Natasha Rostova’s feelings.

What did the author want to say?

That’s the most frequent question that a Russian school kid has to answer while studying literature. Scholars have an academic view on the classic Russian novels - and one needs to know for sure who the ‘bad’ or ‘good’ guy is among the characters and what the author’s attitude to the subject matter of his writing. In general, Tolstoy wanted to show how big historical events influence lives of ordinary people, how much they are changed by turbulent situations and how bad social opinion affects destinies. Moreover, Tolstoy enters Napoleon and Russian Tsar Alexander I as characters and tries to show their psychological portraits, as well as inner thoughts of the rest of the characters. So, the scale of the matters Tolstoy is writing about is really huge, just like the size of the book. He created an epic poem (in prose, for sure) of the nation’s feat, the one that relatively young Russian literature had lacked before.

The author manages equally natural writing on behalf of young girl Natasha and old grumpy Prince Bolkonsky, Andrei’s father. Of course, in our short summary, we couldn’t mention all the dozens of characters that Tolstoy created with great love and attention to the most minute details of their image and psychology. But, below are some important plot lines and scenes you need to know.

The novel begins in 1805 with a scene from a party in the house of the empress’ maid of honor, Anna Scherer. St. Petersburg high society is discussing the threat of Napoleon, even calling him the Antichrist. Here, we meet two important characters. First is Prince Andrei Bolkonsky, who is about to set off to the war seeking great military glory, despite having a pregnant wife. And another is Pierre Bezukhov, an illegitimate son of a count who received a huge inheritance (critics often consider Pierre to be the “voice” of Tolstoy himself). Due to his financial condition, he becomes an attractive man to marry and, finally, marries a beautiful “femme fatale” of high society - Helene Kuragina.

Then, the novel moves to Moscow and we meet the Rostovs’ noble landlords and their kids, one of which is Natasha Rostova, a beautiful young girl, full of life. 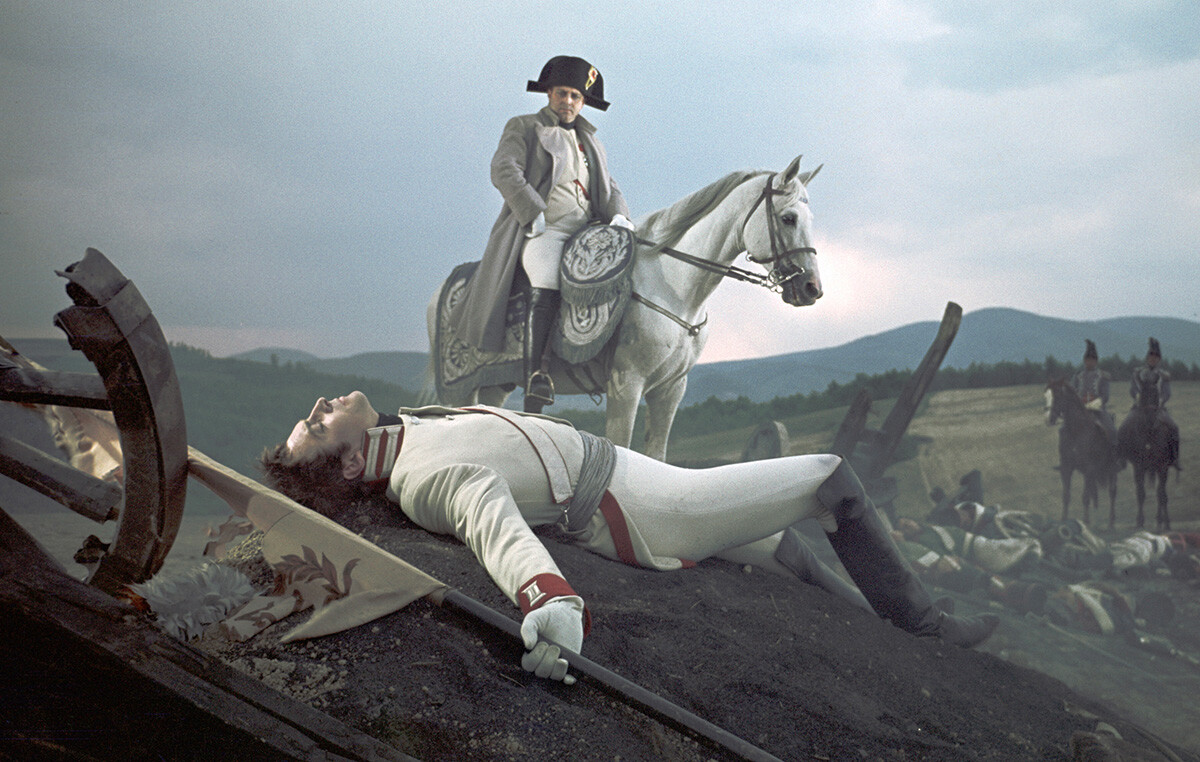 Vyacheslav Tikhonov as Bolkonsky (in the foreground) and Vladislav Strzhelchik (on the horse) as Napoleon in Sergei Bondarchuk's film "War and Peace", 1966

Finally, the reader is taken to the war in Europe. The Russian army takes part in the Battle of Schöngrabern (Hollabrunn) and then in the Battle of Austerlitz. Andrei Bolkonsky doesn’t feel any of the glory of war that he expected and gets a serious injury in the second battle. The volume ends up with the description of how Napoleon observes the battlefield at Austerlitz after his defeat and notices Andrei lying among dead bodies, but still alive and orders to take care of him and other wounded.

Andrei’s family doesn’t know if he is alive, but he returns on the night his wife is giving birth (and dies during labor).

Pierre finds out that his beautiful wife has committed adultery (and probably has many lovers). Challenging her lover, a brave officer, to a duel, he injures him. Pierre breaks up with his wife and… joins a Masonic lodge. 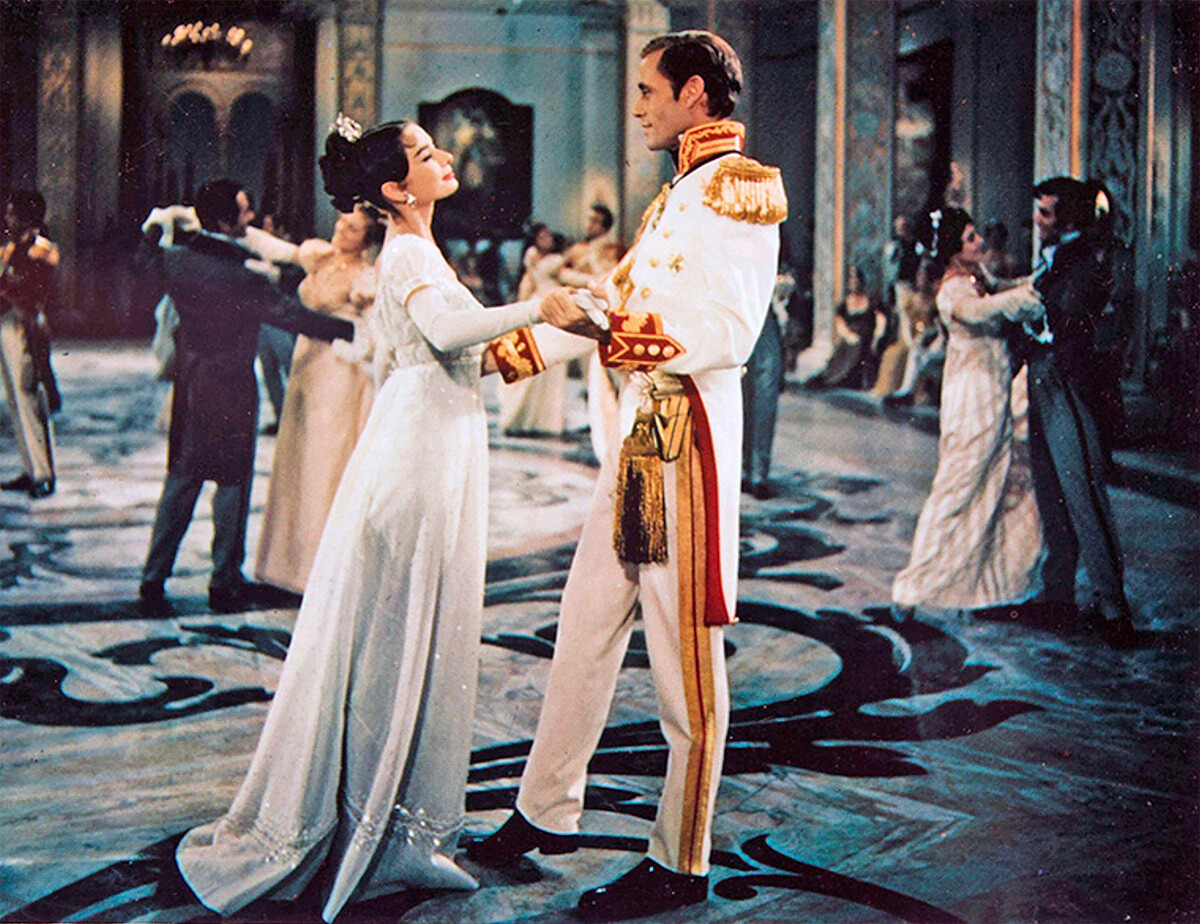 Sad Andrei leaves the army and takes care of his household and his estate - and meets the Rostovs’ father. An important scene of the novel is how Andrei stays at his house and, at night, by accident eavesdrops on the conversation of Natasha Rostova, so full of joy. Suddenly, he feels that life has turned its back to him, too. Soon, he proposes to Natasha and she agrees, but he takes a gap year before the wedding, saying that he is going to travel Europe.

Missing Andrei so much and for a long time, young Natasha meets handsome Anatol Kurakin (brother of Pierre’s wife, Helene) at a party… and he woos her and finally asks her to leave her parents’ house and secretly marry him. Eventually, this doesn’t happen (the parents find out about Natasha’s plan and stop her and it appears that Anatol already has a wife). And, feeling very bad, she reveals everything to Andrei who has just returned.

After Natasha and Andrei break up, Pierre meets the girl in tears and says the now iconic words: “If I were not myself, but the handsomest, cleverest, best man in the world and if I were free, I would be on my knees this minute to beg for your hand and your love.” 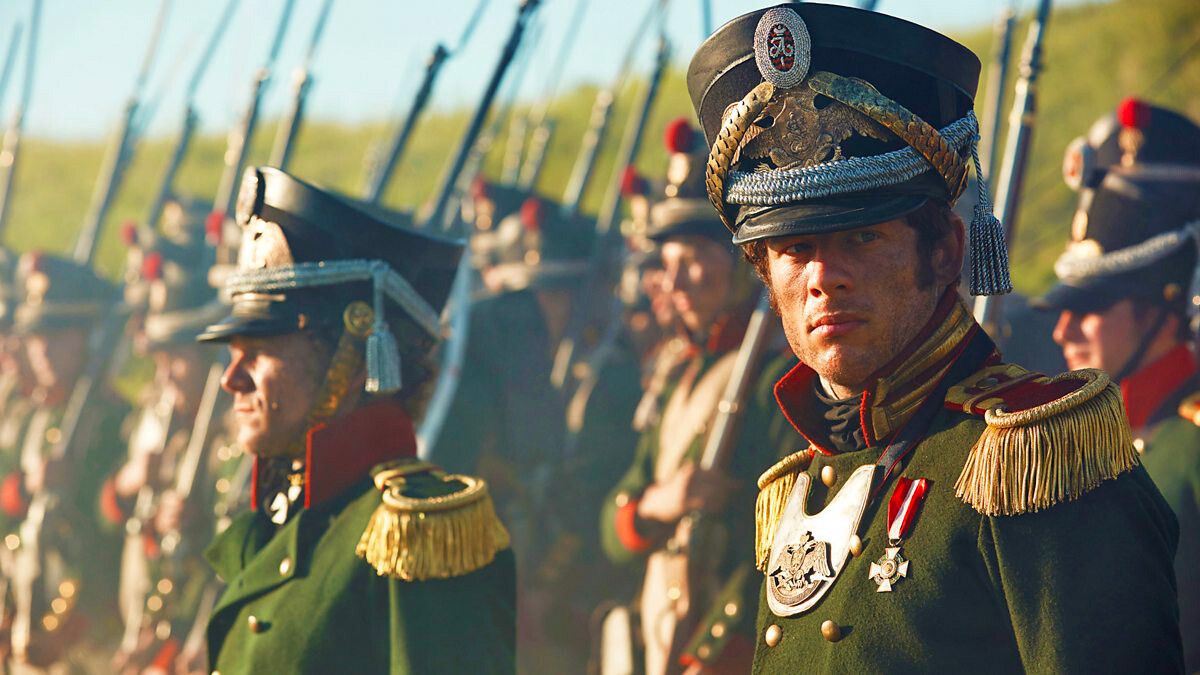 The War of 1812 begins and Napoleon is on his way to Russia. Andrei has to return to the army and is being adored by the whole regiment. Even Kutuzov, Russia’s chief commander, asks him to work in his staff, but Andrei refuses. Getting a serious injury, he appears on the next hospital bed with Anatol, who lost his leg… and surprisingly to himself, Andrei doesn’t feel anger about this poor man, his recent foe.

Pierre also goes to war and soon also meets his foe, Helene’s former lover, who asks Pierre for forgiveness. In the face of great danger, the Russian nation seemed to have united and forgotten minor insults.

The important scene is the Battle of Borodino where the Napoleonic army gets defeated and, first of all, because of moral reasons - they are invaders, while Russians are fighting for their land. However, the French army keeps on the offensive towards Moscow. Muscovites have to leave their homes in a hurry… Somewhere along the route, the Rostovs meet the injured Andrei. And Natasha takes care of him.

At the same time, Pierre decides not to leave Moscow - and he thinks that his mission is killing Napoleon himself! But… he gets captured by the Frenchmen. 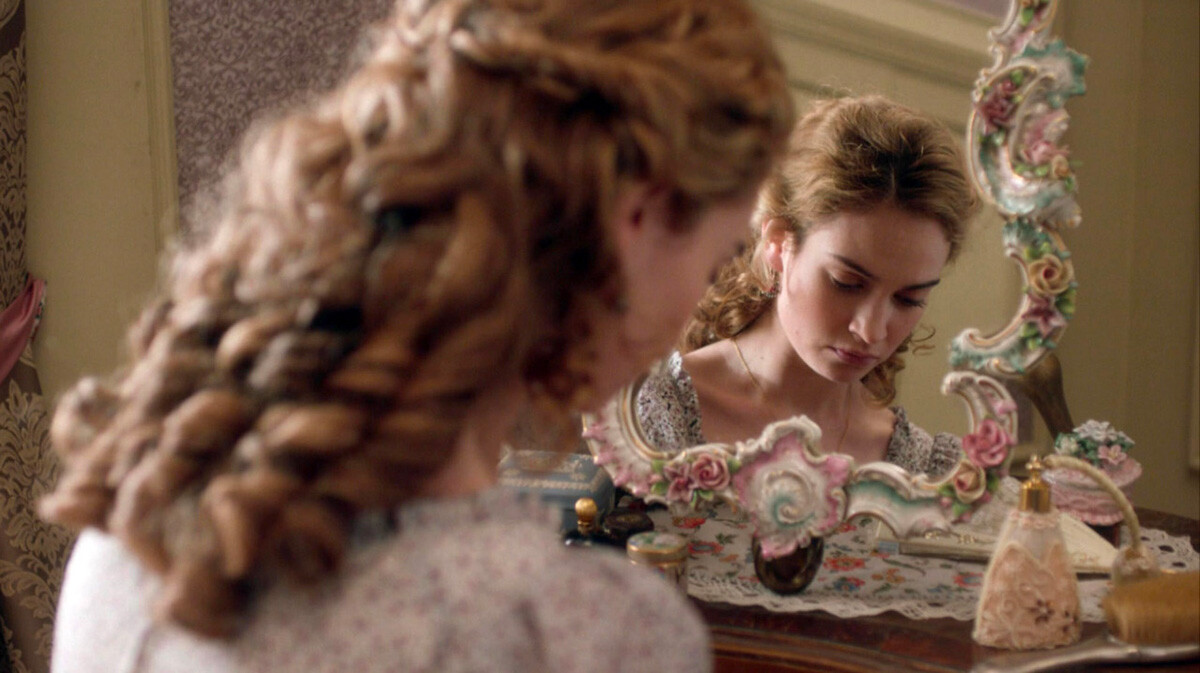 Just like Volume 1, the readers find themselves in Anna Scherer’s high society party in St. Petersburg. But now, the talks about Napoleon are not abstract and philosophical any more. Noblemen read news about the huge fire arranged in Moscow after the Russian Army retreated. Finally, exhausted Napoleonic soldiers flee Russia - and Kutuzov’s troops drive them further and further.

Andrei then dies and Natasha is absolutely heartbroken with this loss. Moreover, she receives news that her younger brother Petya has also died at war.

Being captured by Frenchmen, Pierre follows them as a prisoner of war. However, almost on the border with Russia, a partisan group recaptures a unit of prisoners from Frenchmen. And Pierre is set free. He thinks about marrying Natasha… and, on the other side, Natasha still feels something about him, too.

Pierre and Natasha get married in 1813, a year after war and have four kids. Natasha finds absolute happiness in marriage and kids (Tolstoy’s perception of the perfect woman’s role and mission). At the same time, Natasha’s brother marries the sister of Andrei Bolkonsky. They all spend time together talking about hopes, new life - and politics, of course. 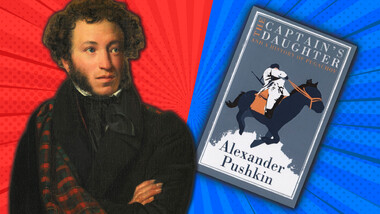 What’s behind ‘The Captain’s Daughter’, the iconic piece of Russian literature by Alexander Pushkin?

At the same time, Tolstoy ponders about history… “Seven years had passed [since the 1812 war]. The turbulent sea of European history had lay down on its shores. It seemed to have calmed down. But the mysterious forces that move mankind (mysterious because the laws that determine their movement are unknown to us) continue to operate.”

Pierre appears to join the secret society, criticizes the authorities and hopes for big changes.

This ending could be the beginning of another novel that Tolstoy kept in mind and wanted to write even before ‘War and Peace’, a novel about the Decembrists, noblemen who arranged the big uprising in St. Petersburg in 1825. But, investigating the issue, he found out that roots lay in the 1812 war. So, he first wrote a novel about that war. He did start to write the ‘Decembrists’ novel, but, after finishing three chapters, gave up the idea, because he couldn’t find the “common human interest” he was always looking for.