Meet the Russians behind the AMAZING shows by Billie Eilish, RHCP & others (PHOTOS + VIDEOS) 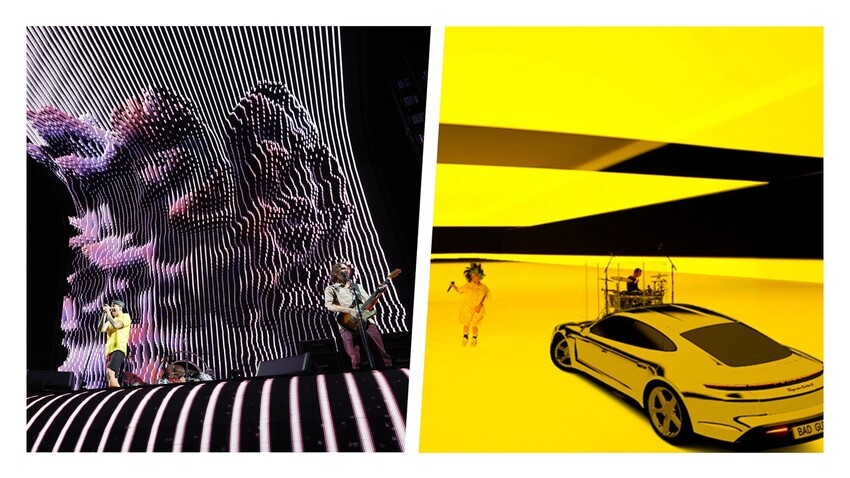 Jason Kempin/Getty Images; Billie Eilish “ WHERE DO WE GO “ The Livestream
Strong visuals are half of any show’s success. Russia has its own headliners in that field. They’re popular in Western show business, where they are creating epic shows for millions of dollars.

Canadian singer ‘The Weeknd’ has finished his ‘The After Hours til Dawn Tour’ with a concert in his native Toronto. Russian multimedia and design studio ‘Sila Sveta’ (‘Power of light’) – that has collaborated with international show business stars for a long time – was responsible for the video accompaniment to the two-hour show. The studio’s video content accompanied all the show’s various stage sets: a panoramic view of the city appeared on a giant IMAX screen, changing its shape and color depending on the track, the rhythm and the melody. 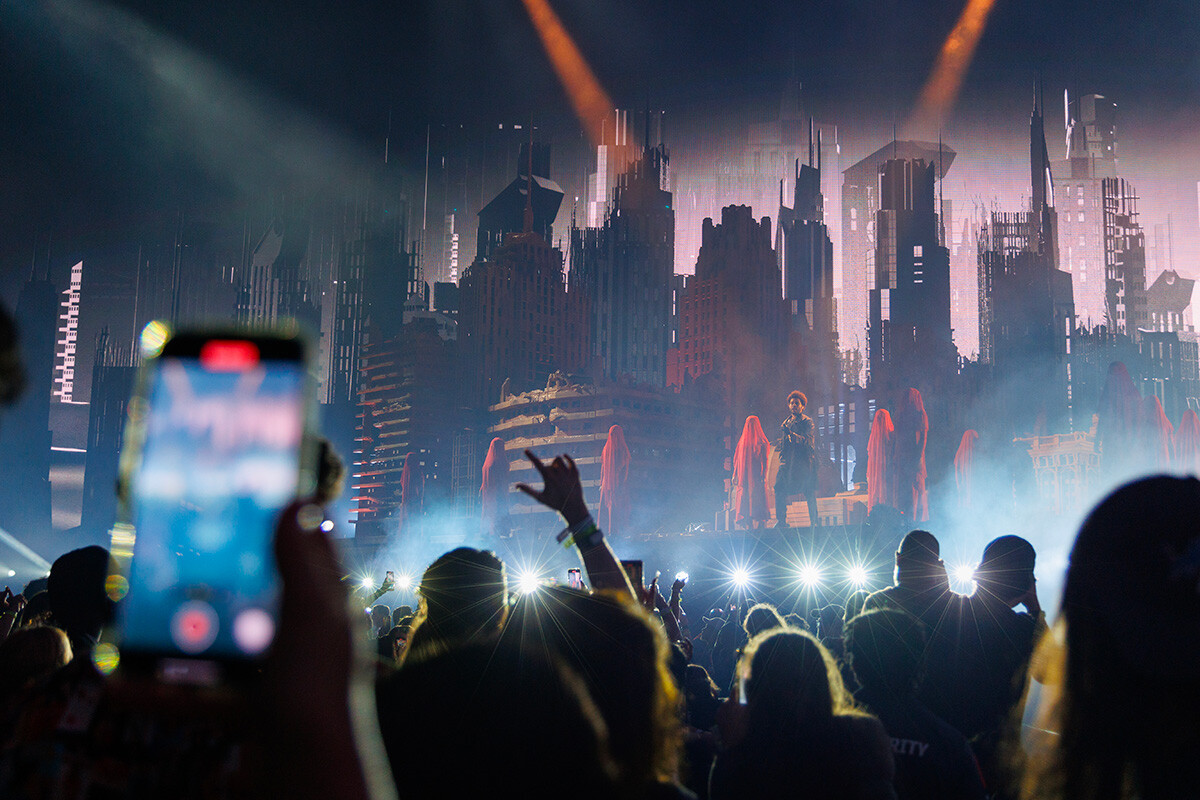 The Weeknd Performs At Ford Field On July 27, 2022 As Part Of His After Hours Til Dawn Tour

According to the show’s concept, ‘The Weeknd’ moved from Hell to Heaven, through ruined cities where one can see the features of many different metropolises (for example, the famous CN Tower in Toronto).

The main highlight of the show was an optical illusion, where the border between real physical objects and the projection screen became indistinguishable. The audience couldn’t understand when the smoke was real and when it was on screen, when pyrotechnics were used and when the lightning was drawn. 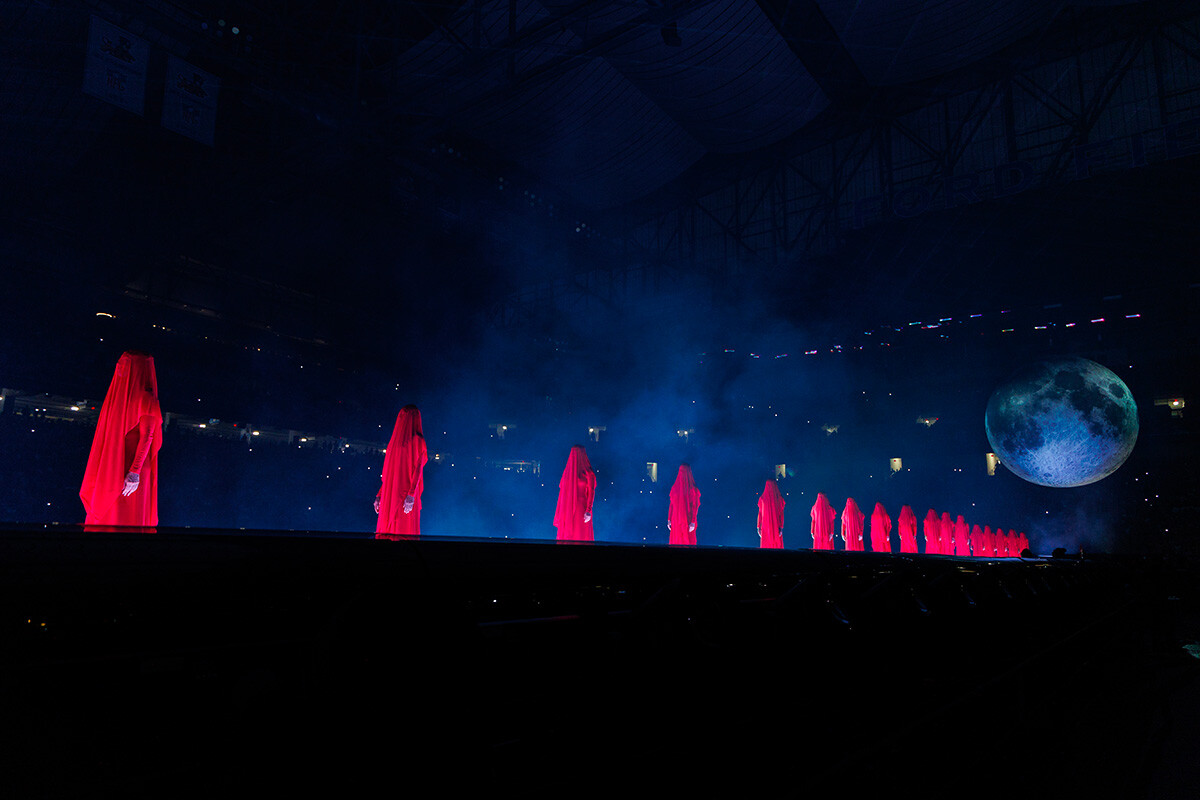 The Weeknd Performs At Ford Field On July 27, 2022 As Part Of His After Hours Til Dawn Tour.

‘Sila Sveta’ is far from being the only popular video artist group in demand in the West. So, read on to find out about them and other impressive Russian projects in video art abroad.

The first Western star to sign a contract with ‘Sila Sveta’ was rapper Drake in 2018. The Russian lighting designers prepared the scenic design for his tour in support of his album ‘Scorpion’. 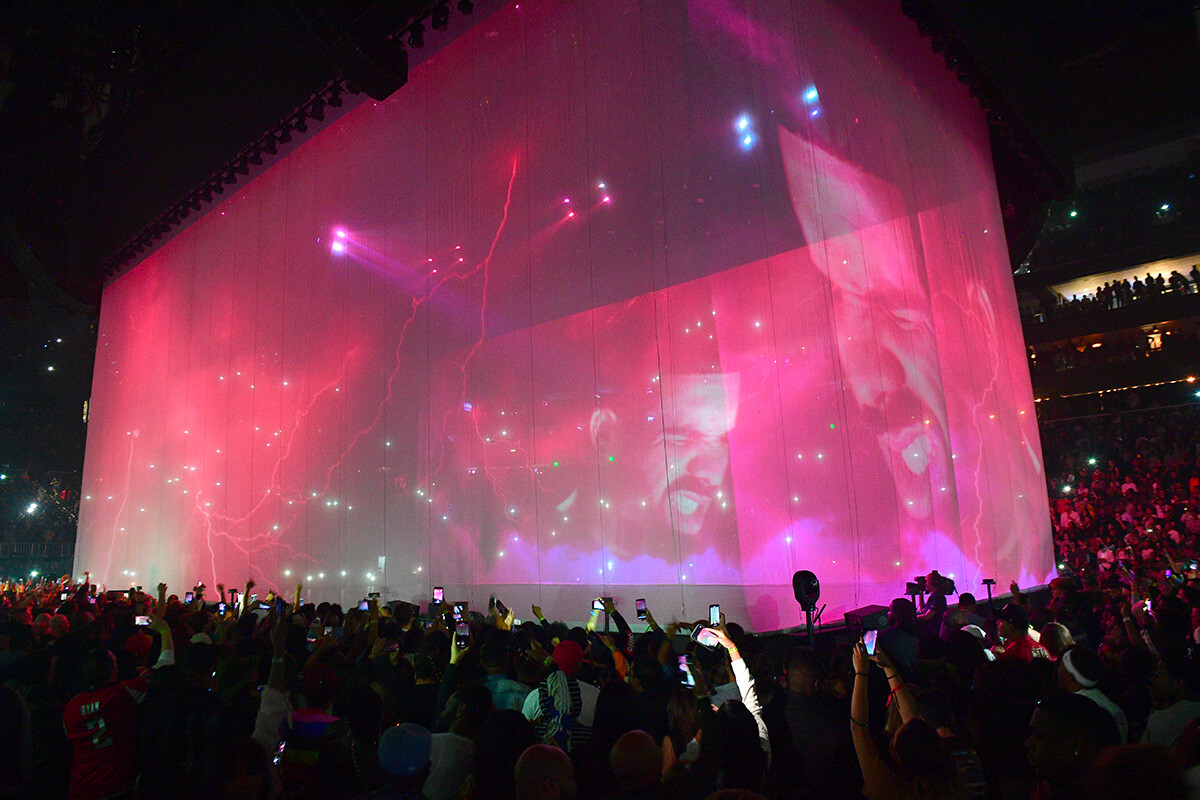 The show had many highlights: realistic lava, Drake’s own holographic projection and a colossal basketball court, among other features. For example, at one moment, Drake appeared inside of a pyramid made of drones and, at another moment, a luminated cross floated above his head. In addition, there were sensors on the artist; no matter where he went, the content reacted to his movements. When Drake trod on ice, it split in his path.

It’s unclear how much it all cost, but just one change of the stage design (right at the end of the working process, the artist changed his mind and decided to change everything) cost Drake a cool $1.5 million.

Billie Eilish among spiders and sharks

In 2020, ‘Sila Sveta’ was hired by pop singer Billie Eilish. The studio created virtual decorations for three songs in her online concert – her first solo concert in XR (extended reality technology) format. The point of XR or “cross reality” is that video content is not limited by screens and goes beyond them, which makes it possible to put giant objects even on a small stage and create a full virtual world around the artist.

Live broadcast cameras circled around Eilish and the background showed different scenes. To the song ‘You should see me in a crown’ giant spiders appeared on the screen – as large as the famous sculptures of Louise Bourgeois. 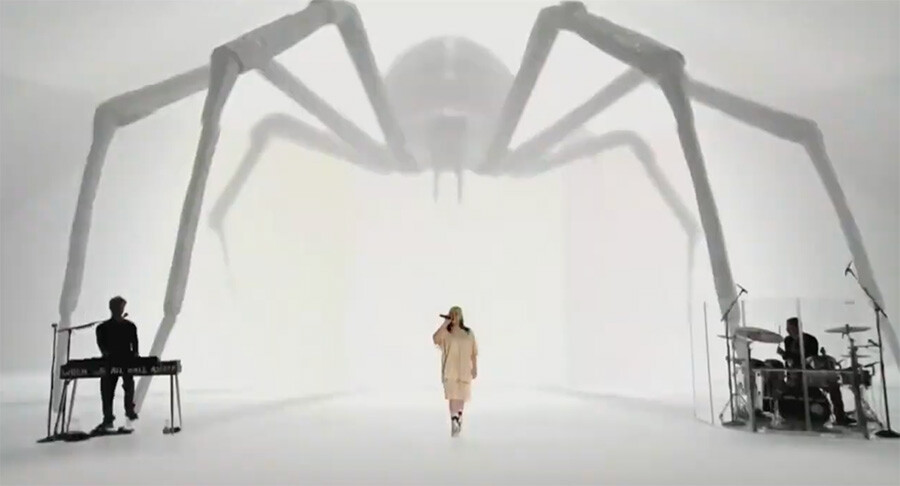 During the song ‘Ilomilo’, the singer plunged into a virtual, incredibly detailed underwater world with giant sharks: 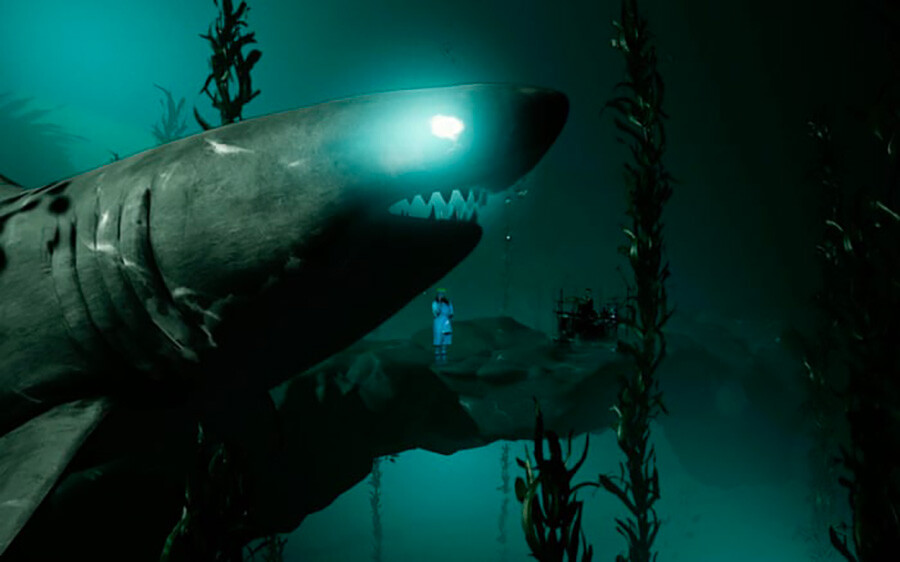 A virtual Porsche rolled out onto the stage during the track ‘Bad guy’: 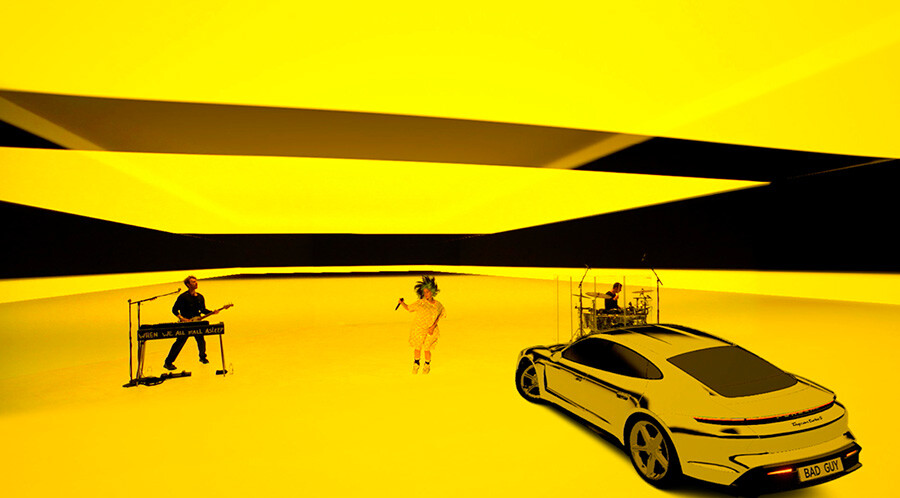 But show business stars are only a part of what ‘Sila Sveta’ works with overseas. The studio has two offices – one in Moscow and another in West Broadway, New York, and they make immersive exhibitions and projects for Western clients regularly. The studio’s works have decorated Times Square, were exhibited at the Met Gala at the New York Metropolitan Museum of Art, supported the digital campaign of fashion designer David Koma, etc.

‘Red Hot Chili Peppers (RHCP) is still on a world tour in support of their first album in six years – ‘Unlimited Love’; and another Russian studio called ‘SETUP’ is responsible for the video accompaniment of their show. The studio was founded in 2018, taking the following concept as its basis: To invent a new visual language for concerts and festivals. 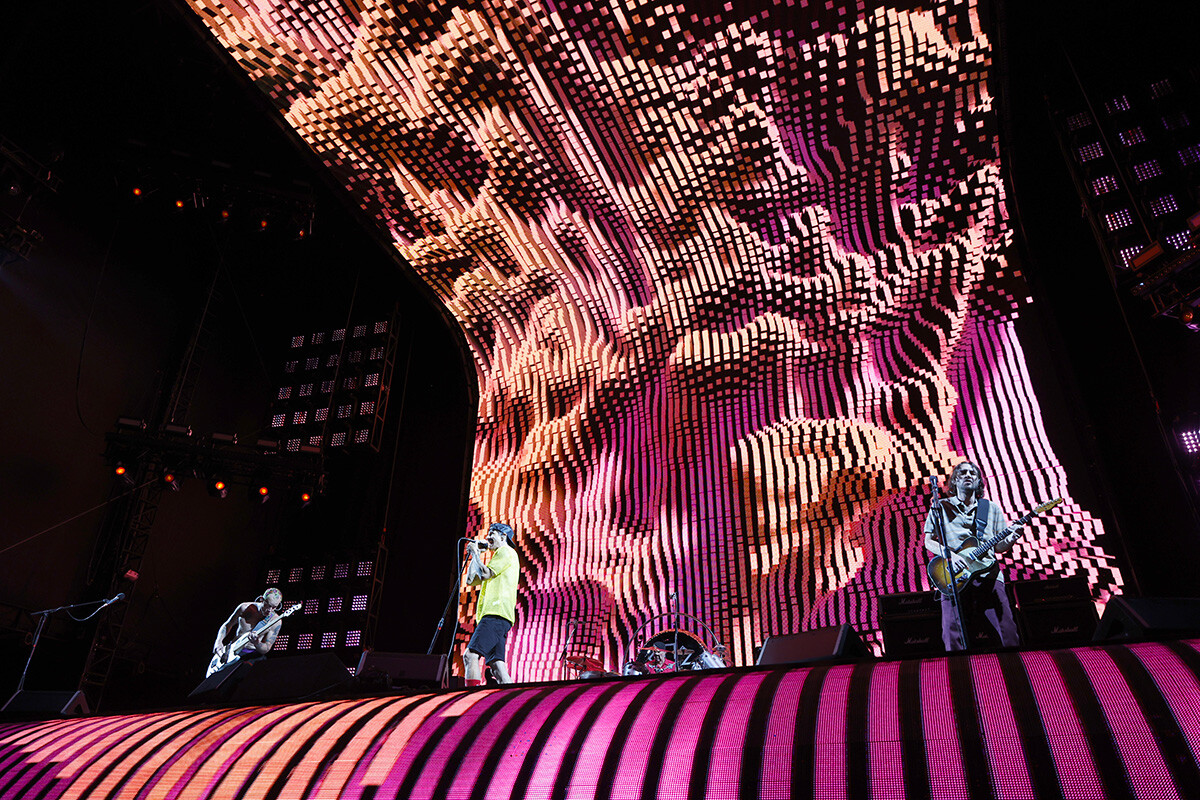 “At the majority of events, VJs [people who manage the show’s visuals in real time] work with content a major part of which is prepared in advance; they only need, relatively speaking, to loop it and apply different effects,” Dmitry Znamensky explains, the studio’s founder. “The VJ can’t significantly change the content over the course of an event. Our content is generative, we have software algorithms prepared and we can change anything in this stream – depending on how the music at an event changes.”

‘SETUP’s fundamentally new approach to a show’s video accompaniment has already been appreciated by DJ Solomun, DJ Boris Brejcha, techno DJ Dixon (‘SETUP’ once created 12 hours of content for one of his parties) and Swiss project ‘Adriatique’.

Now, RHCP has joined them, too. The band’s live performances differ greatly, at times; so, one day, they can play slower, another day – faster or go off on an unplanned jam session. That was both a difficulty and a challenge for ‘SETUP’. Hence, the content for RHCP is created in real time on a server and synchronized with a light panel.

A couple more examples of the same type: the recent musical video shoots for Cardi B, Kanye West and Lil’ Durk for the song ‘Hot Sh*t’ under the leadership of Lado Kvataniya, a Russian director of Georgian-Ukrainian descent. Or a long-standing cooperation of the Russian-Georgian team of Dmitry Vorobyov, Pavel Pavlyukov and Georgy Molodtsov with Jean-Michel Jarre, the father of electronic music.

For Kvataniya, it was a debut work with a foreign artist. Before, the director worked with top artists in the Russian rock and hip-hop scene: ‘Leningrad’, ‘Husky’, ‘Dolphin’, ‘Oxxxymiron’, ‘Manizha’ and others. “This experience was akin to a trip to space – I realize that I am one of the very few who was lucky enough to work with artists of this scale,” Kvataniya described his impressions in an interview with ‘Kommersant’ newspaper.

In the music video, Cardi B scales a skyscraper, defying the laws of gravity. Lil’ Durk ignores weapons aiming at him, while Kanye West raps with a backdrop of futuristic locations.

Georgy Molodtsov and his partners, in turn, created a visual design for Jean-Michel Jarre – a virtual model of the cathedral Notre-Dame de Paris, which in reality has not yet been restored after the fire of 2019.

Software company ‘Ubisoft’ spent several years scanning the interiors of Notre-Dame for their game ‘Assassin’s Creed’. After the fire, they shared this model with cultural projects – and Russian video artists took advantage of it. Jarre’s performance was in the VR format: while the artist himself was in his studio not too far from the cathedral, his virtual model was giving a concert at a virtual Notre-Dame de Paris.