Embassy of the Russian Federation in New Delhi 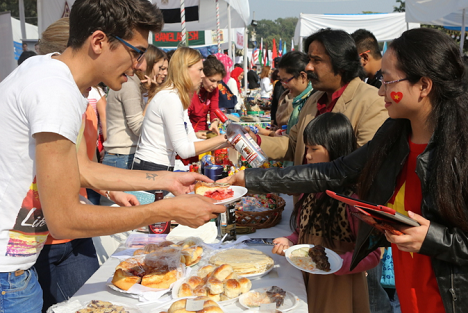 Visitors to the stall were treated to festive food and drinks from Russian national cuisine.

Embassy of the Russian Federation in New Delhi
Products at the Russian Stall sold like ‘hot cakes’ at the annual International Bazaar held for charity in New Delhi. 40 countries participated in the day-long festive event on Sunday, December 13, organized by the Delhi Women’s Association. Russian school students made a special effort to make the event memorable.

The Russian “pavilion” of Christmas products was among the most visited on Sunday, December 13, at the annual International Bazaar 2015, in the Indian capital. This is the city’s major charity fair, held for the 27th time in the Indian capital, in which more than 40 countries participated.

The Russian Embassy in India is a regular participant in all the International Bazaars for charity. The stand it puts up attracts many Indian and foreign guests.

Visitors to the stall were treated to festive food and drinks from Russian national cuisine. The most popular were traditional pancakes with caviar, prepared by T.S. Piven, blueberry pies made by Ekaterina Brovina, Russian kvass brewed by Diana Alipova. The crowds were huge at the lavishly laid tables and, in a very short time, not only was the Russian “magic tablecloth” emptied, but also the counters filled with souvenirs.

Source: Embassy of the Russian Federation in New Delhi

“The Russian Embassy in New Delhi has a long tradition of creating, during this annual fair, a festival of Slavic culture for the Indian public and foreign visitors,” said Diana Alipova, who organized Russia’s participation in this fair. She said: “This year, around 5,000 people visited the fair, and they all came to see us.”

A special event was a unique campaign organized by the students of all classes of the Russian Embassy School in New Delhi. With great interest and warmth, visitors embraced the souvenirs and Christmas decorations that the students specifically prepared to assist the children’s department of the capital city’s Medical Centre in Zamrudpur. Decorative tiles made of paper mache in the shape of Matryoshka dolls, touching cards in Christmas decor, wreaths and festive balloons were a great contribution by the young philanthropists to the common cause. The senior students were not satisfied with just this activity, so, for Christmas, they plan to give toys, collected by employees of the Russian Embassy, to needy young patients.

The youngest visitors to the Russian stall were delighted with the delicate work of Svetlana Khilova, who delighted guests with crocheted Christmas trees, snowmen, exquisite hand-stitched dolls in fancy dresses, hats and slippers, as well as a magical teahouse that seemed to have appeared right from a fairy tale. In huge demand were Soviet Army caps, which adorned the heads of the fathers of Delhi families. Their children appeared delighted with dis-assembling and re-assembling ‘Matryoshka’ dolls. Mothers and grandmothers enthusiastically mastered playing melodies on the traditional ‘Khokhloma’ wooden spoons.

The event provided Indians with a rare opportunity, for an entire day, to walk through the festively decorated lawns in front of the Ashoka Hotel, one of the capital’s iconic buildings, and to sample delicacies and buy souvenirs from around the world. Participating at this year’s event were Kazakhstan, Kyrgyzstan, China, Cuba, Pakistan, Australia, Egypt, Ireland, Serbia, Syria, Vietnam, Pakistan, Czech Republic, Argentina, Mexico, Nepal, and many others.

Source: Embassy of the Russian Federation in New Delhi

The initiator of the Christmas international charity bazaars was the Delhi Women’s Association, established in 1952 to promote cultural interaction of women from different countries living in the Indian capital. What began as a “circle of housewives” has, over the years, transformed this ‘improvised union’ into a full-fledged charity that provides assistance to low-income Indian families, supports its own medical centre with a laboratory and a pharmacy, a day care centre and primary school for children with disabilities.

The Russian stall raised more than 240,000 rupees ($4,000) through sales at the fair. The Russian Embassy in India will give the proceeds of these sales to the Delhi Women’s Association Foundation. Additionally, at Russia’s initiative, everything that was not sold at the stall will be given to the day care at the Association’s medical centre.

First published by The Embassy of the Russian Federation in New Delhi.