From Kerala to St. Petersburg, following the essence of Dostoevsky 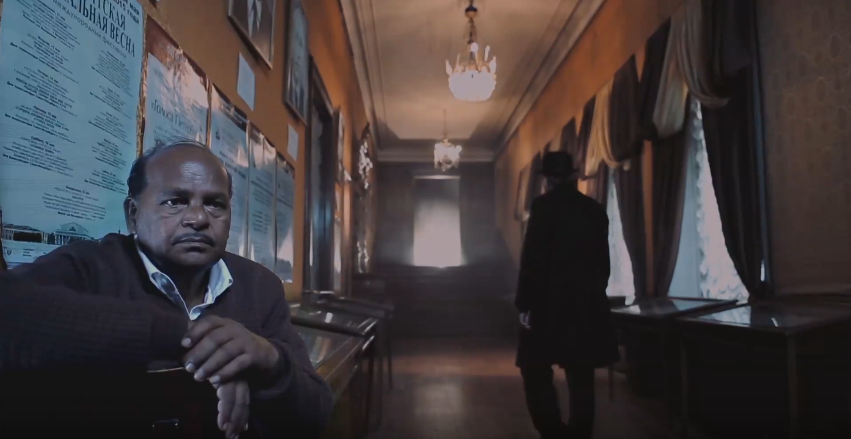 'In Return: Just A Book' exposes greatness and loneliness of Dostoyevsky.

YouTube
A short film 'In Return: Just A Book', inspired by Perumbadavam Sreedharan’s novel on Dostoevsky and his relationship with Anna Snitkina, reveals many dimensions of a literary universe which has no language, cultural or geographical borders, and can only be limited by the author's imagination.

Shot partly in Kerala and in St Petersburg, a 45-minute docu-fiction 'In Return: Just A Book', written by Malayalam short-story writer, novelist and essayist Paul Zacharia, and directed by award-winning filmmaker Shiny Jacob Benjamin, unveils the story of two novels and the peculiar relationship between their authors – one, living in Kerala among coconut trees and paddy fields, another – having lived in 19th century Russia.

The film shows the journey of prominent Malayalam writer Perumbadavam Sreedharan, who is now 77 and Chairman of Kerala Sahithya Academy, from conceptualizing his bestseller novel, 'Oru Sankeerthanam Pole' in 1993, and making his first trip to St. Petersburg, which he explicitly describes in his novel, after almost two decades, in 2015.

Perumbadavam's novel set in St Petersburg of the mid-19th century, unveils the story of the creation of Fyodor Dostoevsky's novel 'The Gambler” and his relationship with his stenographer, and then wife, Anna Snitkina. “The Gambler” was written in just 26 days as Dostoevsky, addicted to gambling himself, was under a pressure of an offensive contract with publisher Stellovsky who would acquire the rights to publish Dostoyevsky's works for nine years without paying writer's compensation if 'the novel was not delivered by set deadline. Anna, who was hired by the writer as stenographer to speed up the work, had become his wife with whom he lived till the end of his life.

Perumbadavam's book has sold more than 100,000 copies in past decade and has recently been translated into English. The English edition is expected to be released by end of this year. According to Perumbadavam , more than 300,000 people read the novel in Malayalam.

Perumbadavam's relationship with his characters who lived in a distant Russia 150 year ago, his relationship with the city that he had never visited before writing the novel but which he knows as his own - by reading Dostoevsky's books, and finally, his bond with the culture that he has never experienced but learned through reading, inspired Ratheesh C. Nair, director of the Russian Cultural Centre in Trvandrum, to make a film. Conceptualized a decade back, the film shaped up only in 2016 after the efforts of several prominent artists and producers from Kerala.

“Perumbadavam could imagine Russia and the time, geography, architecture, people without ever visiting the country. Just by reading Dostoevsky's novels and critics, he could create a very different reality of Dostoevsky in his novel,” Ratheesh Nair said in a conversation with RIR. “When we realized that Perumbadavan has never been to Russia, we were surprised, and we decided it would be a great experience to capture Perumbadavam's visit to St Petersburg, the city he knows through Dostoevsky, to capture his feelings and impressions.”

Nair said Perumbadavam’s feelings and emotions while writing the novel in 1993 were masterfully captured by another famous Malayalam writer, Paul Zacharia who wrote a script for the film. “This is why I always say this is a union of three writers, Dostoevsky, Zacharia and Perumbadavam,” Nair said.

The producer of the film, Baby Mathew Somatheeram, Chairman and Managing Director of Somatheeram Ayurveda Group, in the interview with RIR, said: “I have been to Russia many times for business, I also have a lot of Russian guests coming from Russia to our resorts, and I know and appreciate Russian culture. I have a great connection with Russian culture through Mr. Ratheesh, through Perumbadavam's book which was really famous in Kerala, and I must say that Dostoevsky as well as other Russian authors have always been very popular among Malayalam readers”.

Somatheeram has previously produced The Black Forest, an environment movie directed by Joshy Mathew, an Indo-Austrailian film Force of Destiny directed by Paul Cox, a Sanskrit film Priyamanasam and a Malayalam romantic film Pinneyum written, co-produced, and directed by Adoor Gopalakrishnan. 'In Return' was co-produced by Cherian Eapen, the founder-president of ROY International Consultancy Inc., a Moscow-based IT company.

Shot in St. Petersburg and Kerala in May 2015, 'In Return,' which is mainly in Malayalam and Russian with English subtitles, premiered in Kalavhavan Theater, Trivandrum, in November this year and  featured in the Indian panorama section of the International Film Festival of India (IFFI). The producers are now planning to show the docu-fiction to the public in Kerala through a network of government cinema halls as well as release the film in Russia.

“I began my reading from childhood with the works of Dostoevsky, Tolstoy, Chekhov, Pushkin. I was fascinated by “Crime and punishment” when I read it as a teenager. According to me, Dostoevsky is not only a writer, but a scientist studying people's souls,” Perumbadavam told RIR in a telephone interview.

“It was an unforgettable experience for me to visit St Petersburg, to see the places of Dostoevsky, where he lived, worked, where he is buried. St. Petersburg is a beautiful city which stores the stories of the past in itself,” Perumbadavam added.

According to Nair, during the shooting of the film, when the whole team would rest after the long working day, Perumbadavam would roam around the streets of St. Petersburg, witnessing the famous white nights and visiting the places where Dostoevsky and his characters have walked by, again and again. “In Return” artfully captures two worlds of Perumbadavam – the real world, in sun-drenched Kerala, and the imaginary world of Dostoevksy's city and his novels, his relationship and his agonies.

Rummaging into Dostoevsky's soul and restless mind, the Indian author exposes his greatness and his loneliness, his pain and his relief brought by Anna's love. Perumbadavam believes that Dostoevsky's alcoholism, epileptic fits, his gambling craze should not be considered as his weaknesses, but as symbols of creative agony and internal conflicts of a great writer and personality.