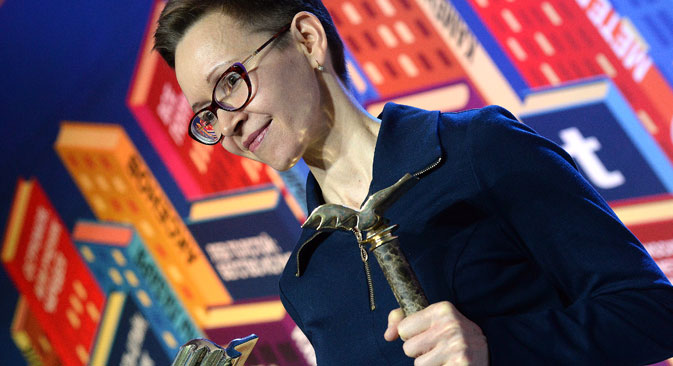 This sensational debut novel is the main talking point of this year’s award, which saw a newcomer to the literary scene take first prize ahead of such established writers as Victor Pelevin and Alexei Varlamov.

Guzel Yakhina was born in Kazan in 1977 and now lives in Moscow. She used to work in PR and graduated from the Moscow Screenwriting Academy this year. Zuleikha Opens her Eyes has already received the Yasnaya Polyana Literary Prize and the Big Book online readers’ selection.

The novel is about Zuleikha, a peasant living in a remote Tatar village in the 1930s. The villagers are sent to a Siberian camp along with dispossessed residents from neighboring settlements. At its heart, this is a family story, which the author herself is keen to emphasize. Jury member Lisa Hayden describes it as a “moving novel” that “deserves all the praise and awards it has won”, while the critic Pavel Basinsky writes that in this novel “relating what the grandmother says is not enough; the author has had to actually become the grandmother for a while.”

Valery Zalotukha had planned to spend a year writing a novel about the suffering of a modern-day job, Moscow vet Evgeny Zolotorotov. However, it ended up taking him almost 12 years. He passed away in February 2015, at the same time as the publication of his long-awaited novel, which claimed second place in this year’s Big Book Prize.

Zalotukha was born in a mining town in Tula Region (125 miles from Moscow) in 1954. He moved to the capital, where he worked as a journalist and screenwriter. He won the Nika National Cinema Prize for his screenplay of the film Muslim, which was directed by Vladimir Khotinenko, before turning to prose in 1992. His novella The Last Communist was nominated for the Russian Booker in 2000.

The Candle is a 2,000 page novel about faith and faithlessness. It relates the story of a man who enters a church to light a candle and ends up falsely accused and imprisoned. The book caused intense discussion and a mixed critical response. According to the critic Mikhail Edelstein: “It makes an audacious claim on the epic form, with obvious biblical allusions, and the desire to respond to the most pressing questions of modern life. Its less obvious narrative weaknesses are a treasure trove of material for discussion and interpretation.”

Roman Senchin has been shortlisted for the Big Book Prize on several previous occasions, but this is the first time he has placed in the award.

The Flood Zone is an homage to the novel Parting with Matera by Valentin Rasputin, an exponent of the so-called “village prose” genre. The novel is set in contemporary Siberia and follows the tragic lives of villagers who are forced to leave their homes and move to the city to make way for a hydroelectric power plant that will result in the entire area being flooded.

Read an excerpt from The Flood Zone>>>

The novel’s overriding subject is the helplessness of ordinary people in the face of all-powerful oligarchs, and can be compared to Andrei Zvyagintsev's film Leviathan, which was a hit with viewers last year.

In 2009, Roman Senchin gained wide recognition for his novel Yeltyshevy, which was shortlisted for all the major Russian literary prizes, from the National Bestseller to the Big Book. It did not win any, however.

Senchin's novels have been translated into many languages and he often visits large international book fairs. He presented the Chinese translation of Yeltyshevy at this year’s Beijing Book Fair.

Read more: How much do we know about contemporary Russian writers?