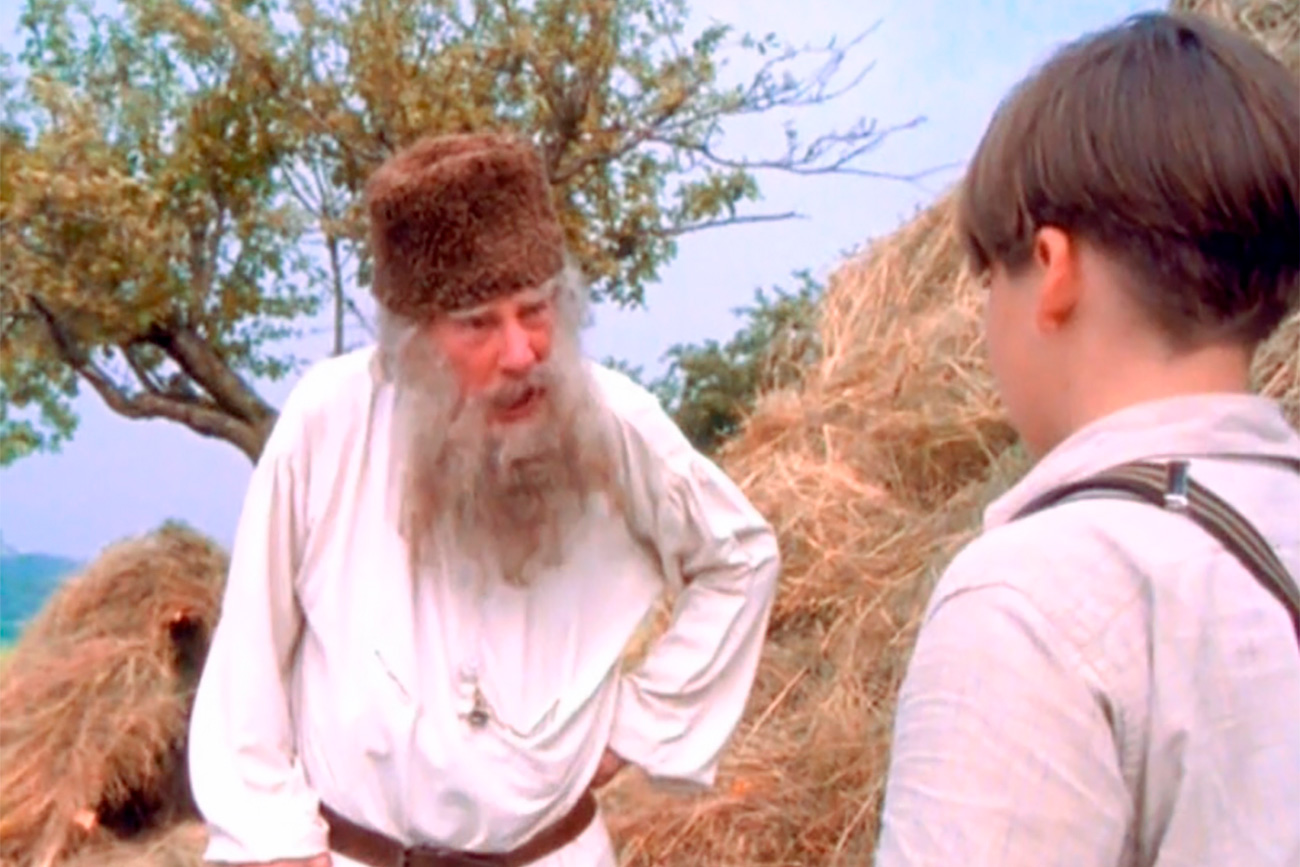 kinopoisk.ru
Leo Tolstoy's influence on Russian culture and society has been so great that the image of this elderly, bearded man, known for advancing moral principles, has become an archetype, a meme and a part of the cultural landscape. 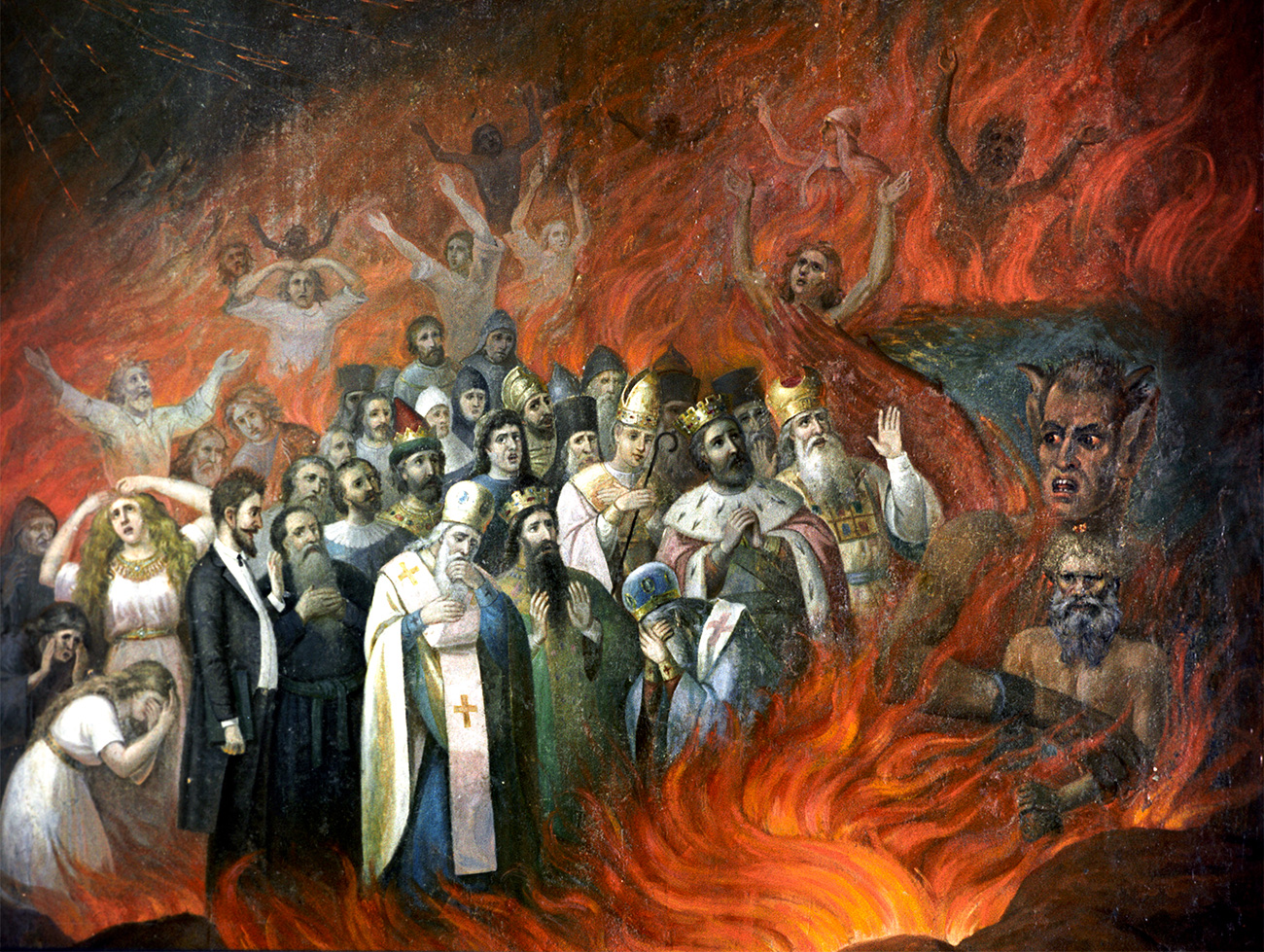 'Leo Tolstoy in Hell' Fragment of the fresco 'The Omen' by church artist M. Andryushin, 1883. The Museum of Religion and Atheism History of the Academy of Sciences of the USSR. Leningrad (St. Petersburg currently). Source: Balabanov/RIA Novosti

The fresco depicting Judgment Day, from a church in the village of Tazovo (Kursk Region, 500 km south of Moscow), shows Tolstoy burning in the fires of hell. The writer spent a lot of time criticizing church dogma and the church as an institution. As a result, he was excommunicated and acquired enemies among religious believers. The fresco was painted with the agreement of the church parishioners. 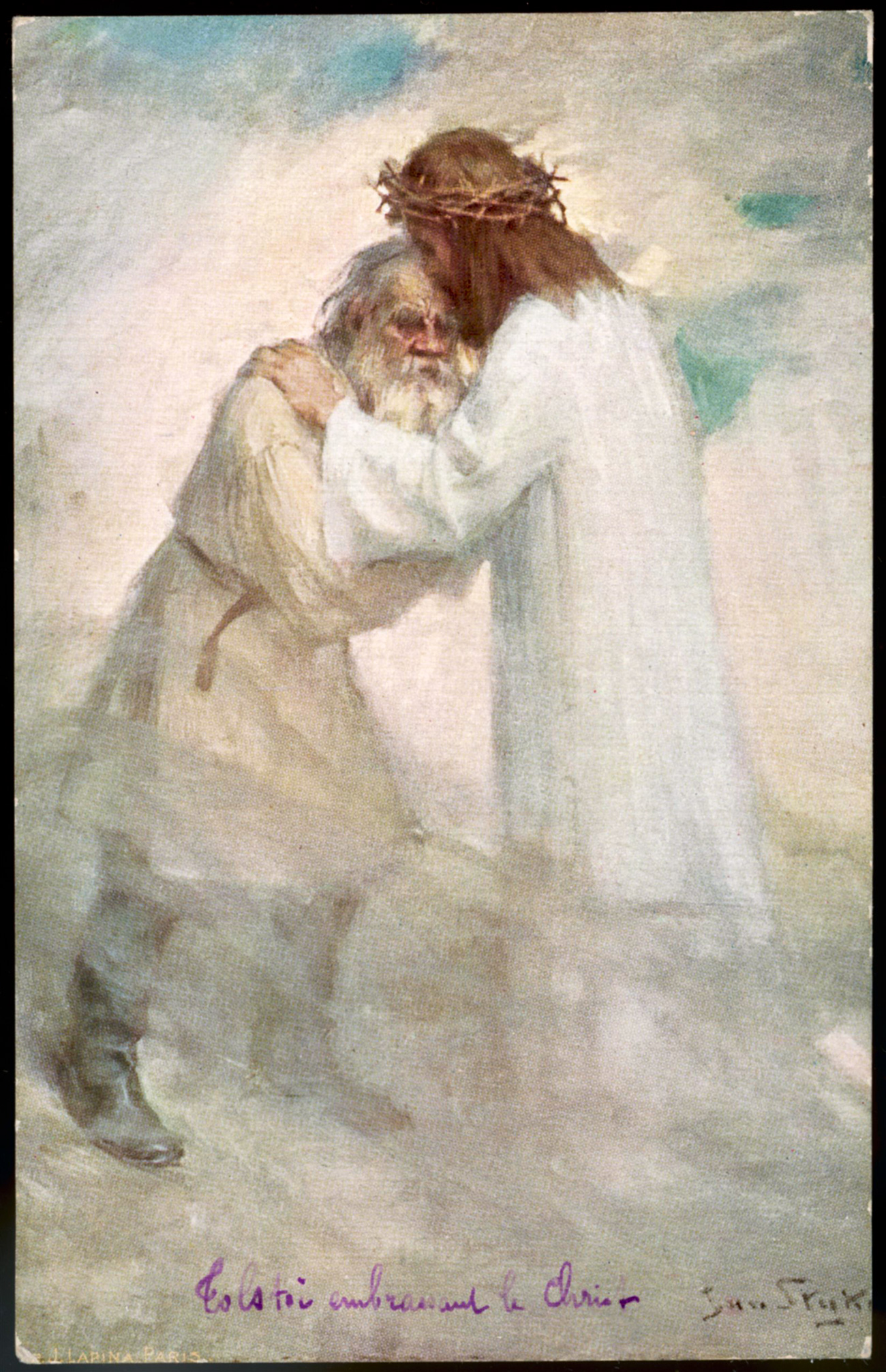 The painting, which is also known as “The Excommunicated One,” depicts Tolstoy, not as a preacher of heresy who rebelled against Christ, but as a Christian, bowing his head to the Lord in submission. 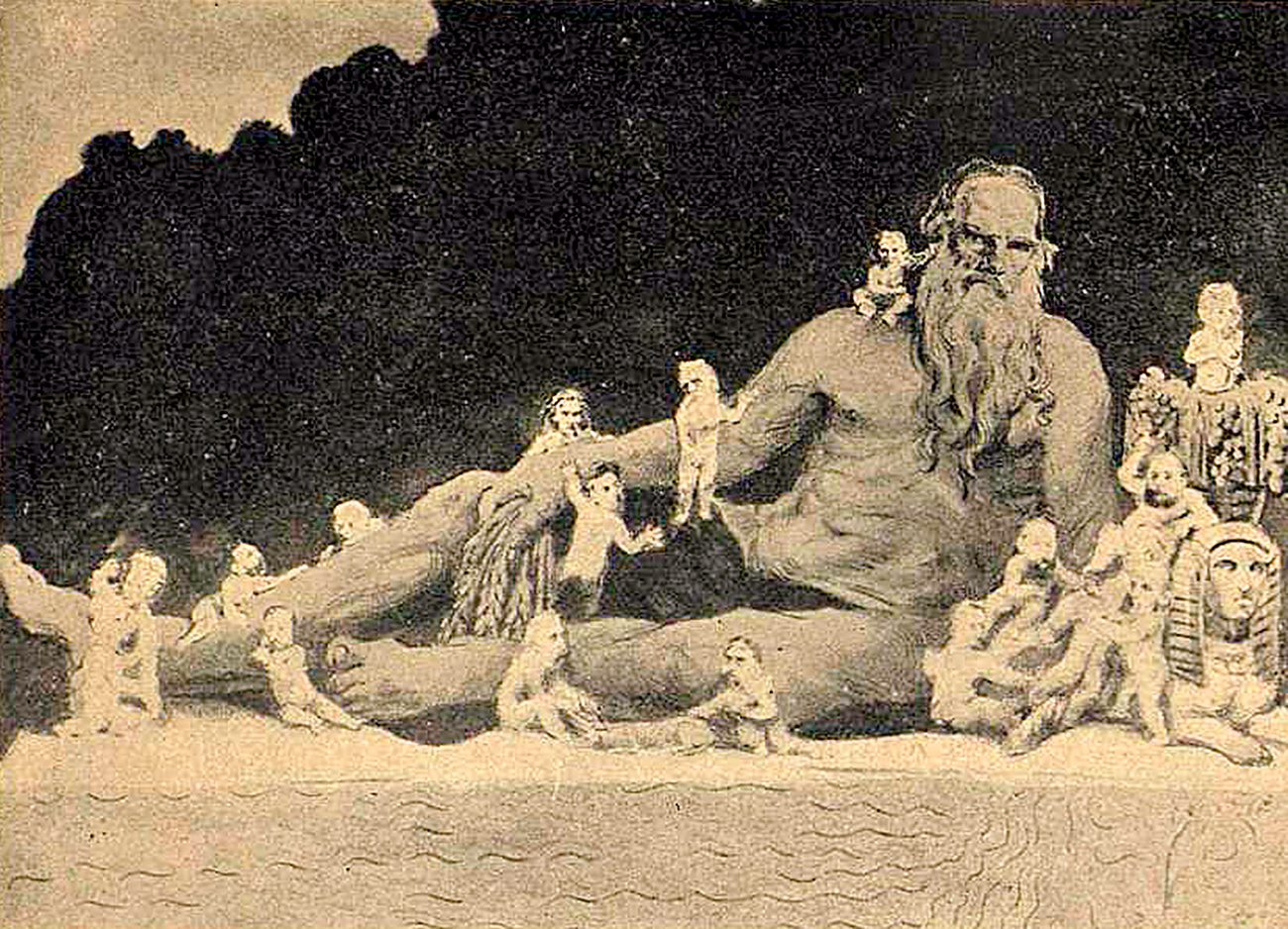 'A Giant Among Pygmies' - Leo Tolstoy and contemporary writers. Caricature by an unknown artist from the collection of Fyodor Fidler, 1903. Source: Volf partnership publishing house

The caricature is a reference to the Nile River God sculpture found in the Vatican Museums, which is a personification of the Egyptian river. In this caricature, Tolstoy's bulk contrasts with the small figures of the other writers, evidently indicating his literary superiority.

The writer Maxim Gorky also compared Tolstoy to a god and said that Tolstoy knew the secrets of creation.

4. Tolstoy without his trousers 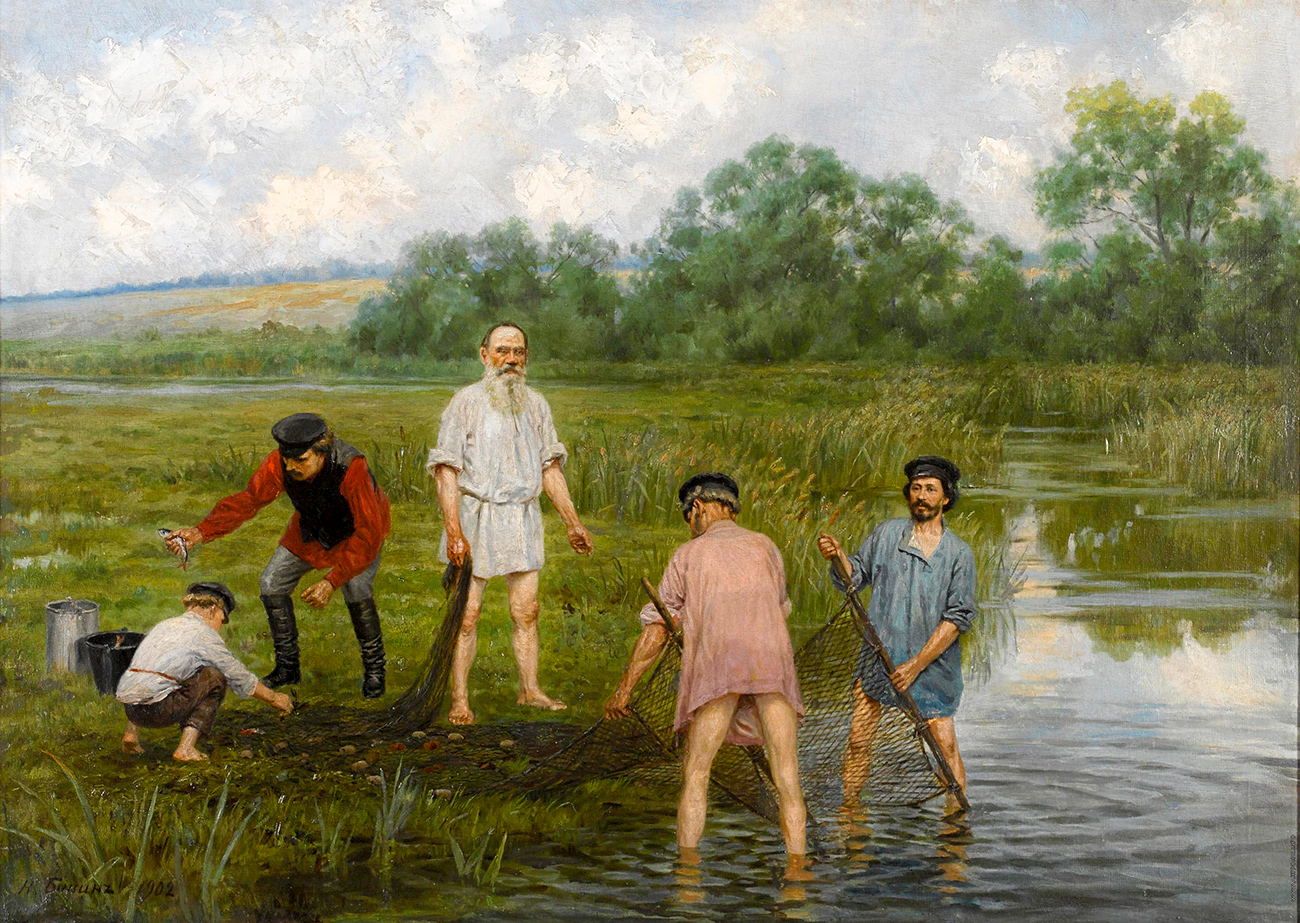 Narkiz Bunin's painting left a strong impression on his contemporaries and many were outraged at this depiction of Tolstoy in only a shirt. Next to the writer, Bunin has placed the artist, Ilya Repin (the figure in the light blue shirt), who devoted quite a number of canvases to Tolstoy and, according to Bunin, contributed to the formation of the cult of Tolstoy.

5. Tolstoy as the conscience of the nation 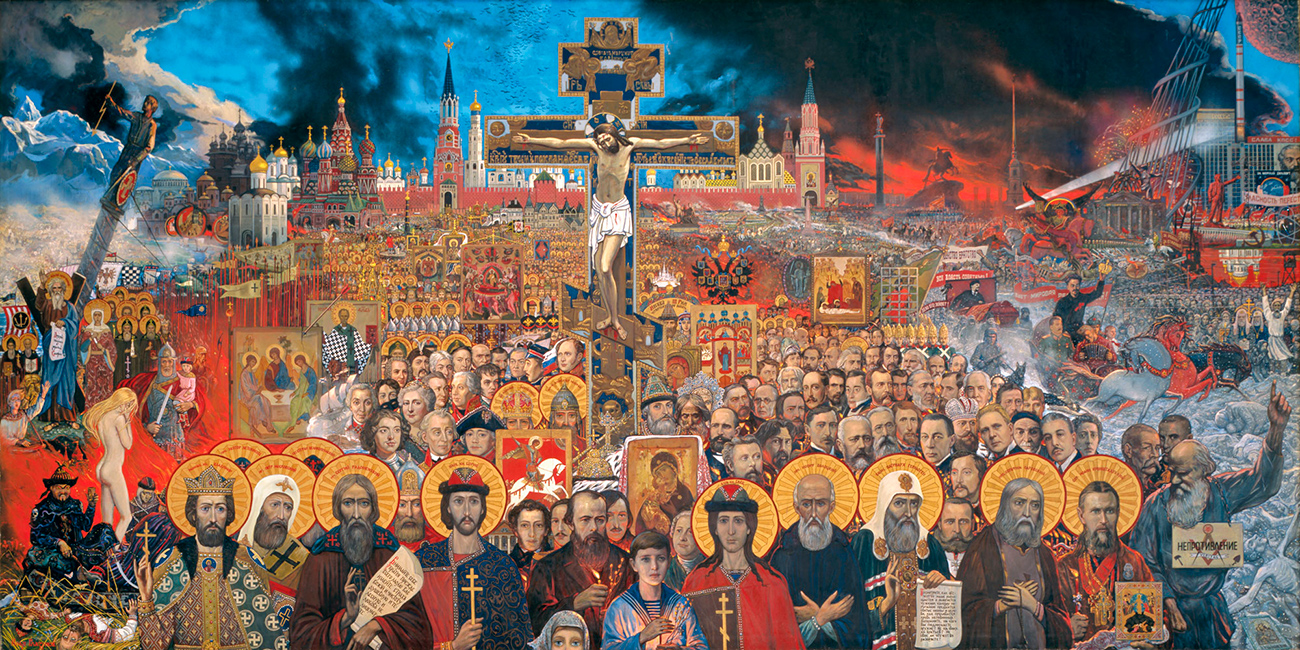 Artist Ilya Glazunov’s intention was to capture the whole of Russian history in one painting, while also showing her place in the overall arch of time. Leo Tolstoy is seen here (lower right corner) among others who exerted a colossal influence on their contemporaries and followers. On his chest is a sign proclaiming "Nonresistance," a summation of one of the main principles of his religious and ethical teaching — that evil must not be resisted by violence. 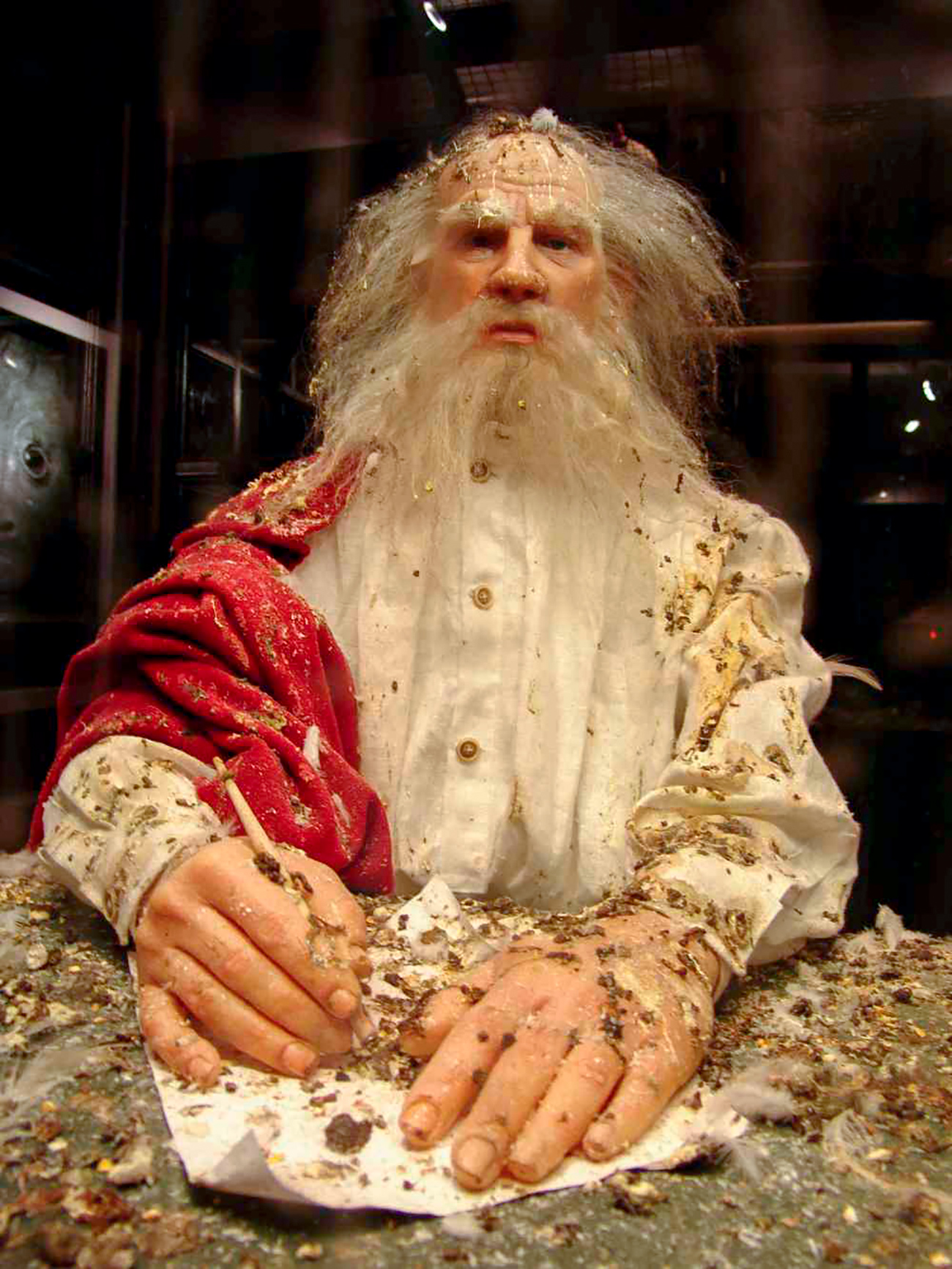 The contemporary artist Oleg Kulik admits that he has always admired Tolstoy's work. He decided to use the image of the writer to explore mankind's cultural heritage, which combines the "high" (in other words, the natural — hence the hens) and the "low" (in other words, culture — hence Tolstoy). After all, the writer himself rated the natural above the cultural.

7. Tolstoy the victim of slander

Tolstoy’s contemporaries, including his son Lev, found the film shocking. The film was criticized for its insinuations, including the way it portrayed the intimate parts of the writer's life and the way that all the protagonists were "presented in the most repugnant light." The final scene was lambasted for its portrayal of Christ receiving the deceased writer into heaven.

8. Tolstoy the mentor and friend of Indiana Jones 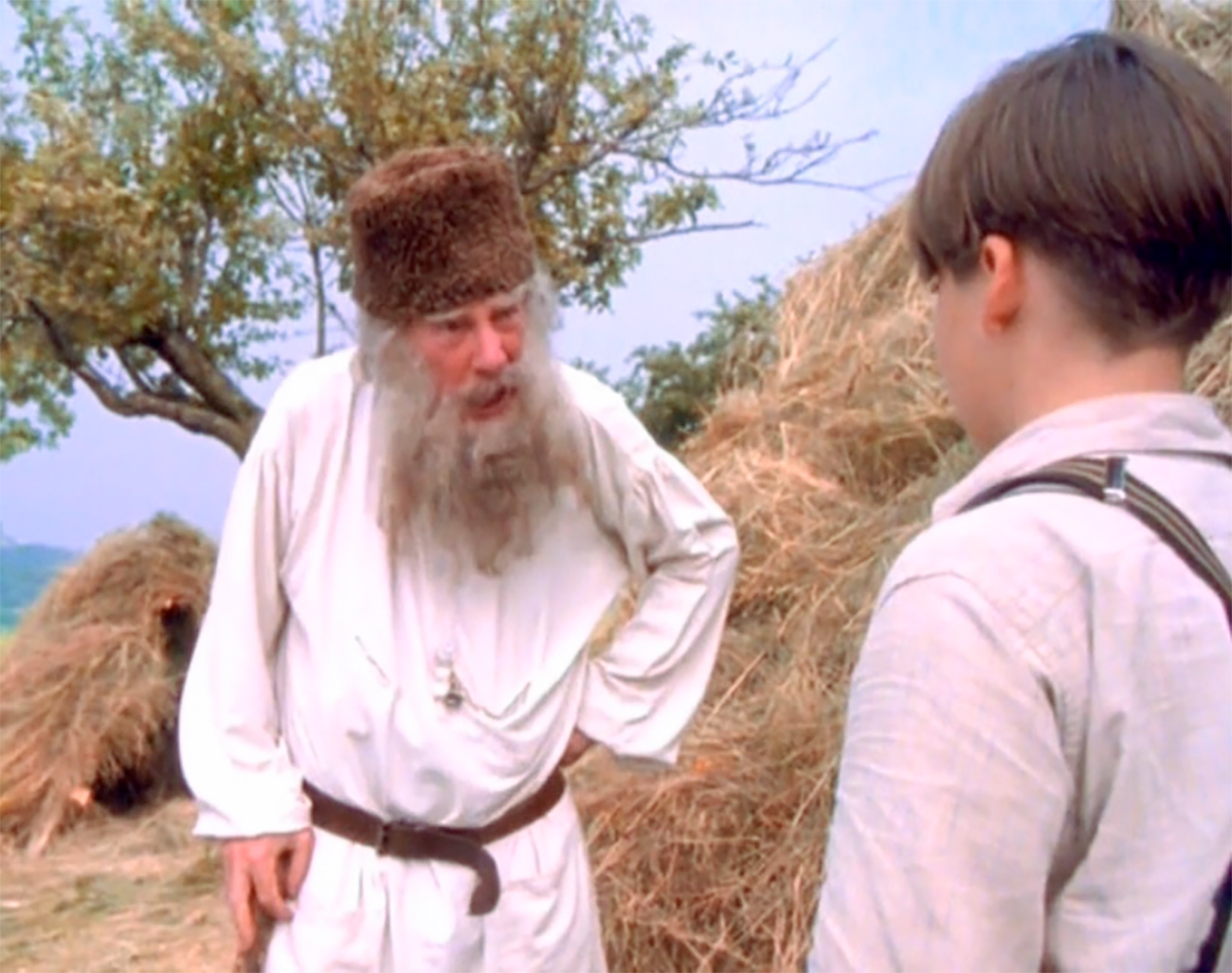 Having run away from his family, the hero meets Tolstoy, who has also left home. The writer and the boy initially find they have little in common, but decide to travel together and proceed to get involved in a variety of adventures before finally deciding to part ways and return to their homes. Tolstoy is portrayed as Indiana Jones's mentor. He shares his wisdom with the boy and, upon parting, gives him his Bible (or rather exchanges it for the young Jones' baseball cards). 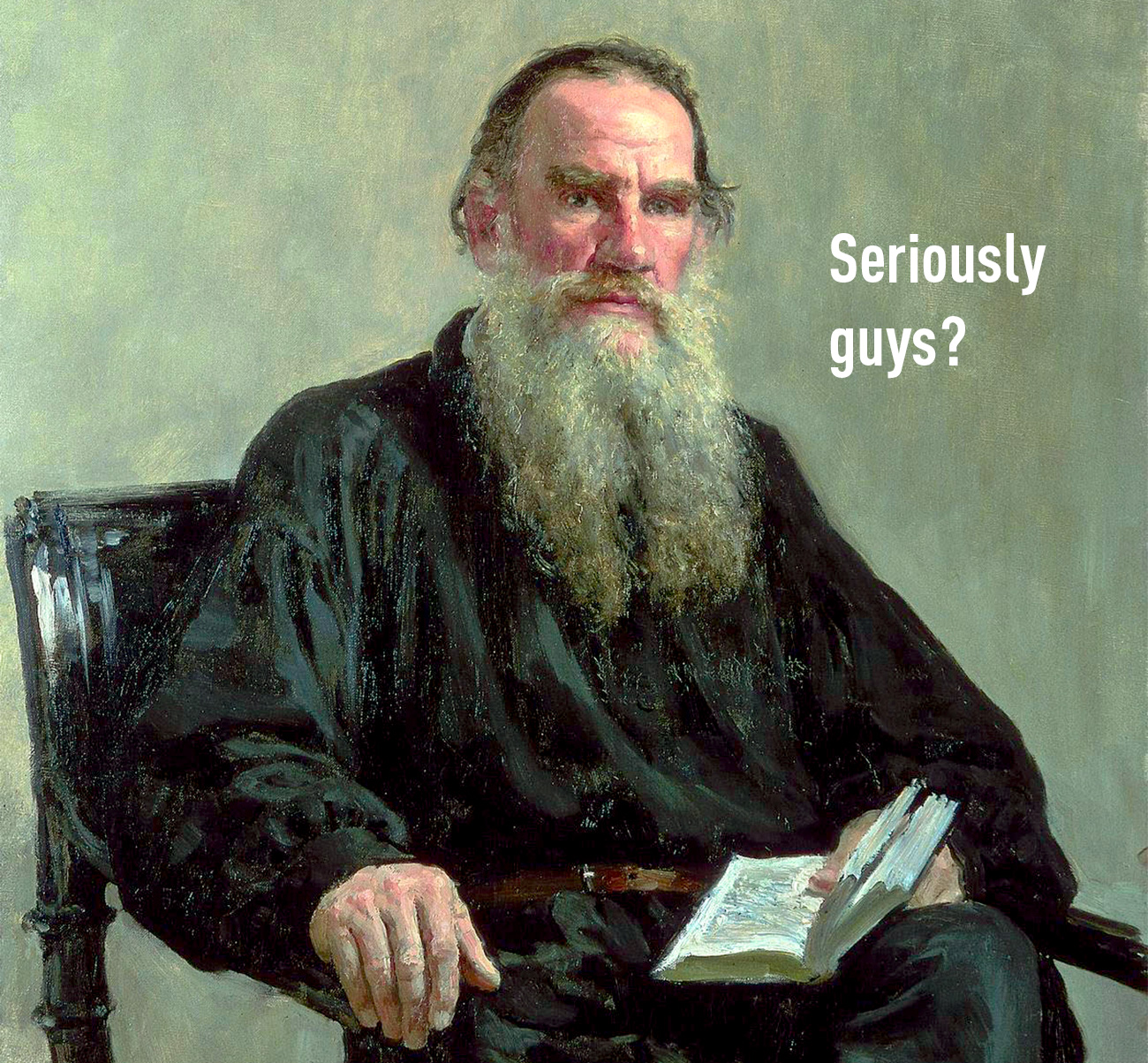 Tolstoy has given rise to a large number of memes. The most well known is somewhat obscene and can be roughly translated as "You say you're Leo the Thick, but in fact you're just a pr*ck" (the translation relies on the fact that the surname Tolstoy literally means "thick" or "stout"). But there are many others. By and large, these memes refer to the intellectual superiority of Tolstoy, who is often pictured looking condescendingly at a foolish interlocutor or doing a facepalm. 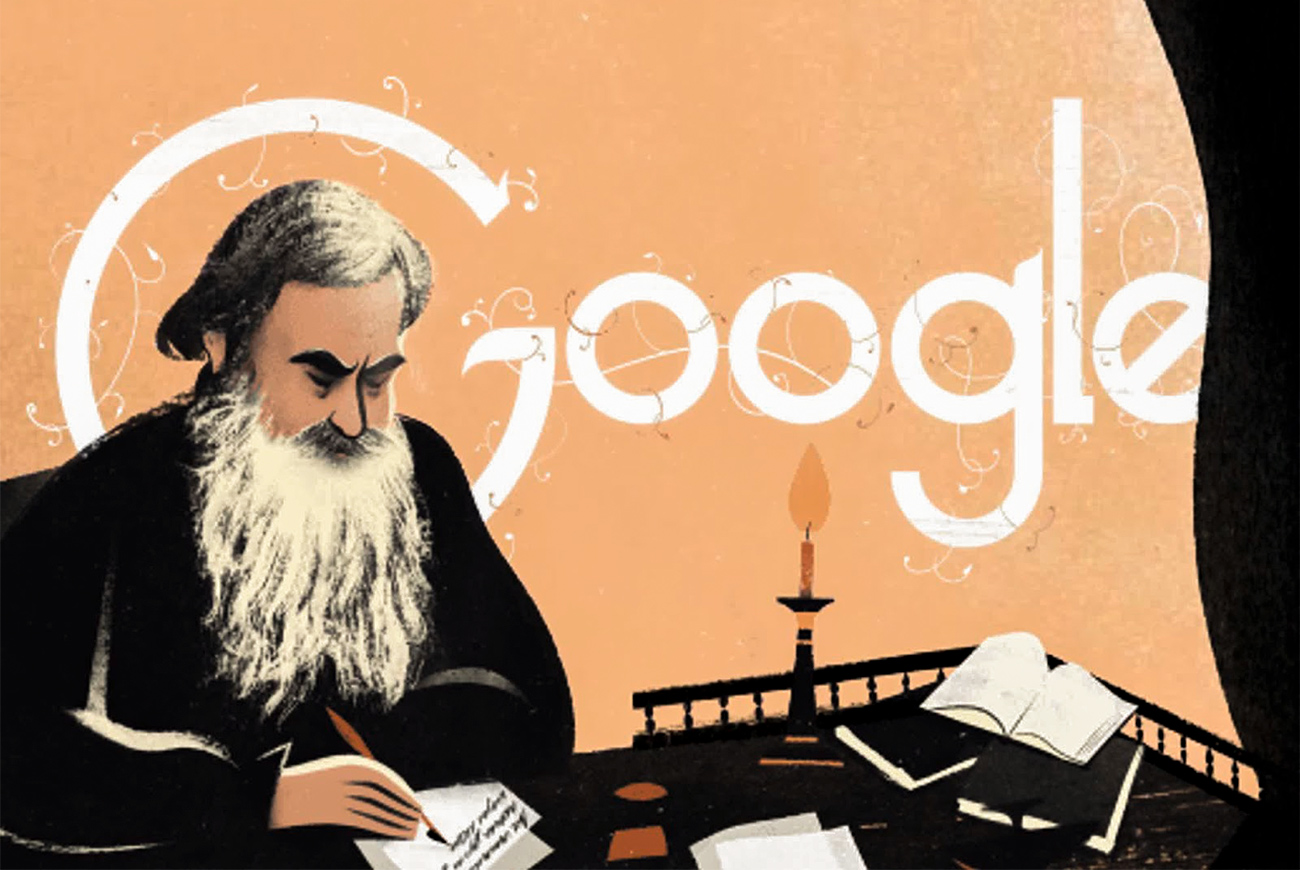 A Google Doodle was made to mark the 186th anniversary of Leo Tolstoy's birth. It tells the tale of the writer and his most famous works: War and Peace, Anna Karenina and The Death of Ivan Ilyich.

This is a shorter version of an article published in Russian on the Arzamas website. Prepared by Anastasia Tulyakova