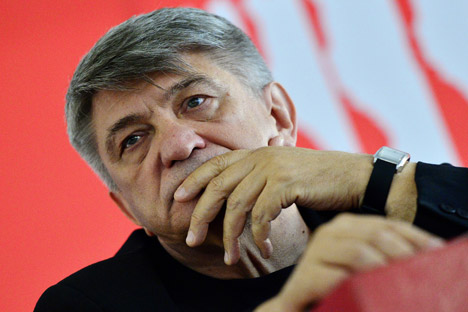 The European Film Academy has presented Russian film director Alexander Sokurov with the Lifetime Achievement Award, the official website of the Academy reports. The award was given “for his outstanding work in the field of directing, dramaturgy, and cinematography.”

One of his first feature-length films, Mournful Unconcern, was in competition at the Berlinale in 1987, and in the same year his film The Lonely Voice Of Man, his 1978 debut which was prohibited in the USSR, won the Locarno Bronze Leopard.

Sokurov’s trilogy on the effects of power was also recognized across the world. The first one, Moloch, about Hitler, was in competition in Cannes in 1999, awarded for the Best Screenplay. The second, Taurus, about Lenin, again premiered in Cannes in 2001. The third, The Sun (2005), about the Japanese Emperor Hirohito, was in competition in Berlin. Finally, the film Faust received the Golden Lion in Venice in 2011.

In 2015, he presented in competition at the Venice IFF Francofonia, his film about the French Louvre during the Nazi occupation.

“As a writer and director, Alexander Sokurov continues to be an important and inspirational voice in Russian and European cinema, not just artistically but also through his courageous commitment for the freedom of speech and artistic expression and humanistic values”, the web-site reports.

He will be an honorary guest at the 30th European Film Awards Ceremony on Dec. 9 in Berlin.