Gymnastics star hangs up her ribbon? 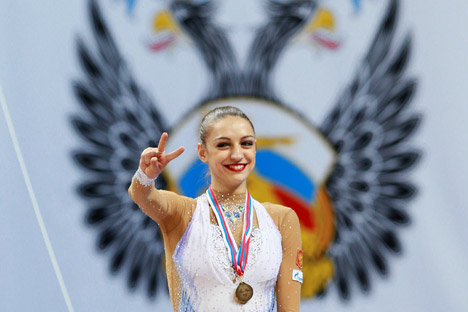 Evgenia Kanaeva: “The emotions that you experience when you compete build up inside you, and sometimes they suddenly pour out like a wave.” Source: Anton Denisov / RIA Novosti

Russian media claimed that top international rhythmic gymnast Evgenia Kanaeva would bid farewell to her sporting career. Yet according to R-Sport agency, Kanaeva is only taking a break to focus on her health.

“No one is unbeatable in sport – but some people are unforgettable,” says gymnast Evgenia Kanaeva. “That’s the kind of competitor I always wanted to be: no, not in 2003, when I won my first junior international title, but in 2012, when I got my second Olympic gold.”

During her successful career, Kanaeva was undoubtedly a worthy recipient of the most flattering descriptions and compliments that came her way – unbeatable, unforgettable, inimitable, champion, queen and star. Nonetheless, after the London Olympics, any hopes her fans may have harbored of seeing her triumph again faded.

“I’ve barely had time to enjoy this win and you’re already asking me about the Games in Rio de Janeiro,” Kanaeva said, trying to explain her feelings. “In sport, one day you’re an idol, the next day you’re no one – nothing lasts. I had reached the top, and it was very difficult to stay there for four years.

"Of course, I also trained a lot before Beijing; but after Beijing, everyone expected something new from me. Many people also expected to see a new person, someone who could be the leader in rhythmic gymnastics. Life doesn’t stand still. I had to find more striking styles, learn more complex elements. In a word, I had to grow. It wasn’t easy for me, but I had a goal – to reach the heights that I had already once achieved,”  Kanaeva has said.

There are other peaks besides Olympus, and it seems Kanaeva is going to be focused on them now. She is nearing the end of her studies, learning English, and getting used to her new responsibilities in the Russian Rhythmic Gymnastics Federation (RRGF). She is now a member of the executive committee and vice president of the RRGF. Kanaeva was thinking about her new career when she first decided to share her thoughts about retirement.

“I think I’ve come to the end of my career,” Kanaeva told journalists after the RRGF electoral conference last December. “I could have stayed on and continued working, but I want to experience something other than the training process. I don’t rule out the possibility of continuing my career in the federation and as a coach.”

Interestingly, when Kanaeva’s personal coach, Vera Shtelbaums, commented on the official news that came out a month ago, she gave new hope to the graceful Russian athlete’s millions of fans.

At the 2009 world championships in Mie (Japan), Kanaeva won six out of six possible gold medals, breaking the record set in 1992 by another Russian, Oxana Kostina (who won five golds).

On October 16, 2011, in the final of the rhythmic gymnastics Grand Prix in Brno, Czech Republic, Kanaeva got a perfect score from the judges – 30 points out of a possible 30 for the ribbon.

At the 2012 London Olympics, she became the first double Olympic individual rhythmic gymnastics champion in history.

“She can’t be sure about anything yet,” said Shtelbaums. “She seems to have retired, but on the other hand… Nothing is certain in these matters. Take Alina Kabaeva, for example: she took up competing again after two years. If Evgenia decided on a comeback, she could still win: she’s fit enough to do that. But it’s impossible to say how it would all work out.”

When Kanaeva is competing, she is always extremely focused, serious, and closed off from journalists and supporters. To pirouette with apparent ease in front of spectators is very difficult work. The athlete has to leave all her strength, emotion and smiles on the mat.

In a one-on-one conversation, however, Kanaeva comes across not just as a gymnastics virtuoso, but also as simply an open and sincere person.

“The emotions that you experience when you compete build up inside you, and sometimes they suddenly pour out like a wave,” she says. “It’s a moment of ‘déjà vu’ – a strange, but very pleasant sensation. The medals and the prizes are all of secondary importance. You see, I simply love being in the hall, training and performing – gymnastics is such a pleasure for me.”

The floating ribbon, the energetic ball, the dynamic clubs and the flexible hoop… Evgenia Kanaeva always gives a thank-you kiss to the objects that help her to dazzle on the mat. Hopefully, we will see her do it again, even if only in demonstration performances.

What other top athletes see in Kanaeva

“Gymnastics are a part of life for Evgenia. I can imagine how difficult it was to go through two Olympic cycles and come out on top all the time, to stay in the lead. It’s a big responsibility, and it takes a lot of work and endurance. She’s a very talented person, so she’s bound to be successful outside sport too. Sport strengthens and trains your character and your attitude to work.”

“For me, Kanaeva is the best athlete in the entire history of rhythmic gymnastics. She’s special in every way. She’s also an absolute maximalist, and always puts 100 percent into her training, not to mention her performances. And you can always see that and feel it. That’s why it’s such a great pleasure to watch her perform.”