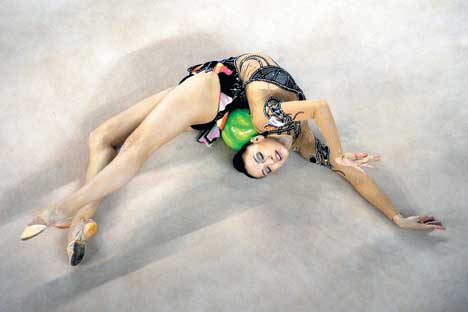 Women gymnasts from the Russian team know how to spring surprises both on the mat and off it.

Russia’s rhythmic gymnasts come into every Summer Olympic Games as top contenders for the gold. And the competition within the team itself is just as stiff as within the international gymnastic community. Coming into the 2012 Games, coach Irina Viner had a difficult time deciding which gymnasts would make the trip to London.

The Russian team  for the Individual competition:

It was clear from the beginning that Yevgenia Kanaeva, who won the gold medal for individual rhythmic gymnastics in Beijing, would lead the team, but the competition for the number two spot was fierce. Alexandra Merkulova, a winner at the Youth Olympic Games in 2010 in Singapore, and Daria Dmitrieva, the world senior women’s champion were in contention, but they both had suffered injuries and had different strengths. Viner made her final decision only 10 days before the competition began. Dmitrieva won the spot and performed her program in London along with Kanaeva.

Two hoops in one hand

The secret of Russian rhythmic gymnastics cannot be defined only in terms of its complex routines and the number of hours spent training in the gym. Viner believes that the main difference between the Russian competitors and others is their mental toughness. “Neither physical capacity nor brilliant arrangements are a substitute for the right psychological mood. Therefore I try by hook or by crook to explain and to show by example what the highest level of skill is. It means having the right attitude to the work, a good attitude; it means practice done with love, getting into that unforgettable ‘flow’ where time has no power over you and no technical problems are of interest to you,” Viner said.

But both Viner and the gymnasts themselves want to experiment beyond the current boundaries of the sport. Although they excel at performing routines with the requisite elements, they are interested in trying for example, to perform with two objects at the same time: with two ribbons, two hoops or a ball and a hoop. The Russian athletes are ready not only to demonstrate showcase numbers, but also to compete in a new discipline.

Ready for the unknown

The preparations for the latest Olympics were nerve-racking for the rhythmic gymnastics team. Many members of the team that went to the Beijing Olympics left the squad and the new team members were not considered as strong: They dropped objects and lost in both the world championships, in the Grand Prix stages and in the World Cup stages. At the 2011 world championships, after a brilliant victory in the five-ball exercise, the Russian girls made so many mistakes in the program with three ribbons and two hoops that they ended up at the bottom of the tournament table. These kinds of mistakes also occurred during the Olympic qualifiers.

Viner experimented with the team and changed coaches twice. She removed Valentina Ivanitskaya, who had led the team to two victories in Sydney and Athens, from her post and tried out Tatyana Sergayeva, the coach of the junior team, before taking control of the team herself.

Both Dmitrievna and Kanaeva passed through the qualification round and are prepared for the finals, which take place Aug. 10 and 11.

Russia’s rhythmic gymnasts are beautiful as well as athletic. They have taken part in two large-scale photo shoots: in 2010, the athletes posed in luxury dresses, and in 2011 in beach wear during a training session in Croatia. Photographs from the first project were displayed in a special exhibition entitled “The beauty of victory,”and both photo sessions will again be shown as part of the Sochi 2014 Cultural Olympiad project.

Kanaeva: “Zhenya is a very positive, good and hardworking sportswoman. On the mat she can be simply inimitable. In some routines she is so airy and unearthly, she flies like an angel, like a butterfly.”

Dmitrieva: “Dasha is a girl with character: she is such a feminist, a real woman, a real Siberian.”

Merkulova: “Sasha is emotional beyond her years, and in that she’s very similar to Alina Kabaeva. But sometimes her emotions get ahead of her technique, so she has to be ‘held by the tail. There’s a storm inside her and outside her, but in sport you have to control yourself well. But that is bound to come with experience.”