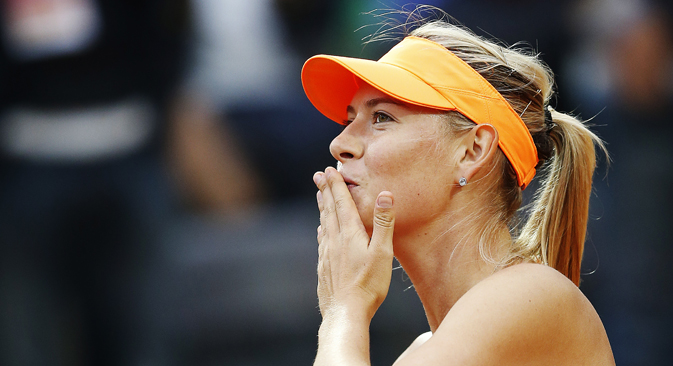 Maria Sharapova blows a kiss to spectators after defeating Garbine Muguruza of Spain in their women's singles match at the Rome Masters tennis tournament on May 15. Source: Reuters

Roland Garros, the second season of the Grand Slam tournament, started on May 26. Russia's hopes rest on Maria Sharapova.

The season’s second Grand Slam tournament — Roland Garros — started on May 26. Sharapova, the current holder of the French Open title, is considered the main rival for Williams, who has been nothing short of invincible this spring.

In the men's competition, Spain's Rafael Nadal is the clear favorite. After more than six months out, he has regained his previous form with incredible speed.

Maria Sharapova, whose ascent began on the Wimbledon grass, used to dislike clay (and especially Roland Garros clay) to such an extent that she once described herself on such courts as a "cow on ice."

Now she looks as at home on clay as on any other surface. Five of her six most recent tournament titles have, in fact, come on clay or hard courts, including last year’s cherished title. Despite that, Sharapova is not the number one seed. After all, Serena Williams will be competing at Roland Garros.

Women's tennis of late can best be described as "Williams against the rest of the world," and the latter's first pick at present would probably be Sharapova.

In terms of consistency and tournament successes, at least (she topped the podium at Indian Wells and Stuttgart), she has left the recently top-ranked Belarusian Victoria Azarenka and other notable names trailing on the WTA Tour this season.

That the bookmakers are strongly tipping Williams for the title makes absolute sense. Serena arrived at Roland Garros with a suitcase already bulging: 24 straight wins and four consecutive tournament victories.

Three times this year — in Doha, Miami, and Madrid — she has fought Sharapova in the final, winning through on each occasion and bringing their head-to-head tally to 13:2, not in the Russian's favor.

Many elite players consider the "warm-up" for Roland Garros to be the Rome Open in mid-May. In five matches, Williams gifted her opponents just 14 games — an average of three per match.

However, Williams, now 30, is known to suffer bouts of mid-game blues, during which she becomes sloppy. It just so happens that the last such incident occurred one year ago in Paris, when the American was dispatched in the first round by Virginie Razzano of France.

However, it is grasping at straws to hope that she will again self-destruct on the red earth of Paris.

The men's tournament, from the bookies' point of view, is very similar to the women's — although men's tennis is commonly regarded as being a tad more competitive. Nevertheless, Rafael Nadal is strongly tipped.

Following his record seventh Roland Garros title in 2012, Nadal was out of action for a long time with knee trouble. Sidelined for more than six months, he returned only last winter, having missed the Australian Open.

Yet no one could imagine how quickly the Spaniard would get back into the swing — almost instantly.

This year, Nadal has set a magnificent "record" — his match win-loss ratio is 36:2, with a tournament ratio of 6:2.

There is, however, one potential fly in the ointment: Novak Djokovic is in the same half of the tournament. This means a likely encounter in the semi-finals. These two juggernauts wear each other down to such an extent that the spoils of war can (and often do) go to the dark horse.

Another dark horse, incidentally, is the great Roger Federer — yet to win a prize this year but still able to sparkle when it matters.