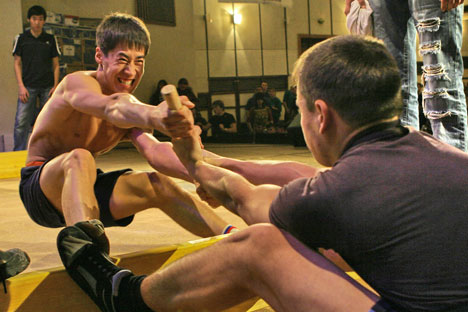 The Russian wrestling tradition dates way back. Mas-wrestling, a sport that originated in Yakutia with roots in the Eskimo tradition, is still popular in the Russian Far East.

Picture the following scenario: Two toddlers find a stick in the yard and start pulling at it, trying to wrench it away from one another, each refusing to yield. With mas-wrestling, the situation is completely different: In a huge sports hall, two broad-shouldered, adult athletes are pulling the stick. And, in this case, the stick is much longer and heavier, and the athletes have a much more technical approach.

Mas-wrestling is the national sport of the Russian region of Yakutia. Its rules are fairly simple: Two wrestlers sit opposite each other and try to pull the stick out of their opponent’s grasp or drag them over with it. Their feet rest on a special board. If an athlete’s hands make contact with the board, he or she loses the match. The athletes are allowed to move their feet around the board in order to help reposition their wrists and bodies. The stick can be moved vertically or horizontally, but its angle may not exceed 90 degrees.

The match begins as soon as the referee blows the whistle—although the wrestlers are already pulling the stick with full force even before the whistle sounds. The first second is very important, because it is at that precise moment that competitors can throw their opponents off balance and win the match. Wrestlers with two losses are knocked out of the tournament.

It is not uncommon for absurd—and, at times, dangerous—occurrences to take place at competitions. Vladimir Sannikov, the undisputed mas-wrestling champion in the 150-pound weight class in 2013, recalls: “One time, I pulled the stick and my opponent let go. It flew right into the crowd. Fortunately, they escaped with just slight shock. They made fun of me for a while afterwards. Of course, you have to try to avoid these things, but sometimes they just happen.”

Mas-wrestling is extremely popular in Yakutia: Almost every resident of this snowy region has tried his hand at the sport. Strength, agility (mas-wrestling involves all of the body’s muscle groups) and quick thinking help not only in the sport, but also in everyday life in the North. Moreover, the sport can be played at any age, and there is no need for a special playing area—one can pull sticks in the gym, at home or in any field.

INFOGRAPHICS: How to play the ancient Russian game of gorodki?

It is impossible to trace back the exact date of the emergence of mas-wrestling, but some sources attribute it to the 18th century. Annual tournaments in honor of Vasily Manchaary—a national hero in Yakutia and a local Robin Hood of sorts—have been held in Yakutia since 1968.

During the tyranny of the wealthy and the feudal lords between 1830 and 1840, Manchaary led vigilante groups in repeated attacks on the slave-drivers’ estates. He took money from the rich and distributed it among the commoners; he was eventually caught and sentenced to a lengthy prison term. In addition to his guerrilla activities, Manchaary was widely known as a storyteller and singer.

The official rules of mas-wrestling were introduced in 1945, and the sport took off at the end of the 20th century. Students began to train and compete in schools and universities; university departments for future coaches appeared. In 2010, mas-wrestling was recognized as an official wrestling discipline by the International Federation of Associated Wrestling Styles (FILA).